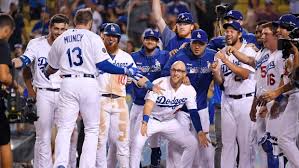 Max Muncy was the last batter up for all of baseball Wednesday night, in Los Angeles, the bottom of the tenth, bases empty, with the Blue Jays and Dodgers tied 1 – 1.

That’s all the information you need — well, that and the fact that the Blue Jays made no errors that inning.  You should be able to tell what he did.

What a fun evening for this EFL owner!

Other things added to the fun.  For example, Kenley Jansen facing Bellingham’s Rowdy Tellez in the top of the ninth of the same game. The Dodgers were clinging to a 1 – 0 lead, and Jansen had just disposed of Randal Grichuk like this:

Tellez did not swing at the first two pitches, both high cutters almost identical to the ones Grichuk swung at.  Tellez worked to the count to 3 – 2 then fouled off two pitches, the last one a nasty cutter right on the low inside corner. Then he homered on a low, inside cutter.

I would never have heard of Rowdy Tellez if the Cascades weren’t in our league. His implacable, unflustered patience at the plate, spoiling some really good pitches… after he let those first two go by, I knew Jansen was in trouble.  You could see the homer coming long before it arrived.

Muncy felt the same, except he didn’t bother with spoiling pitches. He hit the first one in the strike zone, and immediately everyone knew.

He’s got six more weeks as a Wolverine.  If only they could be six thrilling weeks…