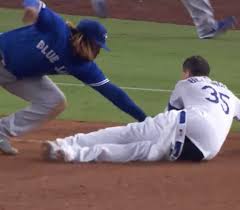 Now I realize, I realize they were wrong,
‘cuz what happens in Vegas,
Don’t take very long,
To travel across continents,
And onwards overseas,
Onto our little island,
To our city, our home.

Cody Bellinger made international news Wednesday evening. You can see it on the BBC  baseball page here.

(That same BBC baseball webpage also has news about Linfield. What did Linfield do this time?  They shocked Qarabag. In football.  In Europe!  Qarabag fans aren’t the only ones shocked to learn Linfield plays football in Europe.  I also find the name “Qarabag” a little shocking. What is it? A town? A country? A bag?  I guess I’ll find out when George Fox gets a chance to play them/him/it.)

Yes, BBC has an entire page dedicated to American baseball (including Linfield football).  As of this moment (late Thursday evening, Oregon time), the top baseball stories on the BBC are:

The article quotes the “Head of the British Plaque Trust” thusly:

“We thought the Americans might take umbrage and get a bit shirty about it but they seemed to have embraced it enormously… and the fact that this game was played before America was even invented as a country has quite tickled them, I think.”

I don’t know any Americans who are quite tickled about this. Do you?  Also, does any American you know check to see what the Brits have been putting on their plaques before deciding whether to be well-shirted that day?  There are days when my son Sam’s attire leaves him little better than “a bit shirty” but — I’m sorry to have to break this to the BBC — he never consults the news from Britain to help him decide what sartorial offenses to commit.

I wonder how the BBC would cover the EFL?