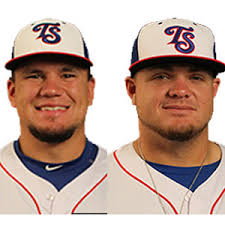 “This is for your own good, sir,” said Daniel Vogelbach as he carried me out of my office. When we reached the conference room, he used his other hand to stack the tables at one end of the room, and rearrange the chairs into a circle. Then he set me down in the chair in the corner farthest from the door, and took a seat across from me.  Escape was impossible.

Vogelbach typed  something into his phone. Then he looked at me. “You have to stop.  Everyone is going to tell you.” I started to protest being hauled out of my office, but he put his mighty hand up. “I am 2 for 19 for the last week, with one homer and two walks. That’s a .454 OPS.  We’re ten games out. I can’t carry us to the pennant.”

“Sure you ca…” I started.  But Vogey raised his hand again.  “No, boss, with all due respect, you cannot ask me to be more than I am.  I cannot carry this team. When you keep saying I can, you put too much pressure on me.”

Josh Bell walked in while Vogey was speaking. “That’s right, sir.  Did you notice what happened after you bragged about me so much in May?  Since June 1, I’m batting .231 with only an .820 OPS. Now neither of your first basemen is producing all that well.  Bryan Reynolds couldn’t even come face you, now that you’ve broken his spirits.  He’s OPSing only .725 this month.”

Zach Plesac came in, all the way from Toledo. “You slam-dunked me into the minors after one bad outing.  Monday I turned in a complete game 4-hit shutout.  You can’t use it because I’m benched. My September ERA is 3.86. But you can’t use it, either.   Couldn’t you have shown an ounce of patience?”

By this time the room was full of young Wolverines, plus Robbie Ray. “I didn’t enjoy coughing up 5 earned runs in 0.7 innings in my start on Wednesday,” he said. “But someone had to do something to break you out of this demented fever that has you thinking we can catch the Rosebuds.”

Josh James was there, too. “We originally thought Robbie’s mess would be enough to get your attention. But then Chris Paddock pitched 6 shutout innings, and we realized more was needed.  So I had to add 4 earned runs in 0 relief innings. Between us, Robbie and I Royal Chulked in less than an inning, burying the team another game in the standings.”

“But,” I said, “Luis Urias is OPSing .929 this week!  And Eloy Jimenez is at .918 for the week!  Yusei Kikuchi had a brilliant game, too. My secret plan — to ride my blossoming young players to the top of the league — it’s beginning to work!”

“Not with me,” said Will Smith. “I was enjoying a rookie-of-the-year type season on August 31, OPSing 1.072. As soon as we hit September I forgot how to hit.  I couldn’t figure it out… until I discovered you had drafted me.  This month I am 3 for 23, with an OPS of .330. Why couldn’t you have let me go to the Pears?  They know they aren’t going to win anything.  They are having fun. Here everyone is so tense and depressed.  You’d thing we were the Balk or something.”

“It’s not working with me, either,” said Lewis Brinson.

“Your approach is hurtint me, too,” said Kikuchi. “Wait until you see my Friday box score. And you won’t like Andrew Heaney’s  Friday line any better.You have to stop demanding we play up to your delirious expectations.”

I looked over to Kyle Schwarber.  “Kyle, I’ve believed in you despite all the years of disappointment.  Do you agree with these guys?”

“I sure have appreciated your support, Boss,” he said. “And I am OPSing .954 this month. But it took me a long time.  You need to give these guys grace, too. Your dream cans till come true.  Just not this year.”

“But we haven’t won in six years,” I protested.

“But half the league has never seen a Wolverine championship,” I moaned.

“None of those players are still with us,” said Schwarber. “And I am sure even the newest owner knows all about your glorious past. ”

“But now Portland is going to win again. I can’t stand it.”

“Maybe not.  Flint Hill still as a chance.”

I slumped back into my chair. “I can’t see how that’s any better.”

“What’s it gonna be, boss?” asked Walker Buehler, the one young player living up to what I dreamed for him.  “Grace and healing, or more of the same unreasonable insistence that we overcome the laws of probability with super powers we do not possess?”

I stood up. So did they, every one of them. “Let me think about it,” I said, and strode toward the door.  But Vogelbach stopped me with his hand on my chest, and the others all moved between me and the door, their arms crossed.

“No, Boss, you can’t dodge this one.” said Vogelbach.  “You need help. First you need to admit you need help, and then you have to get that help. For our sake.  For your own sake. For the dream of a new Wolverine dynasty, the dream we all share, when the time is ripe.”

We stood there a long time, waiting for something to break…