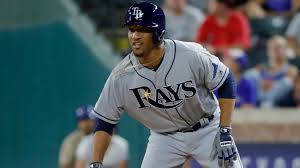 I don’t know about you, but I am drawn to stories in which there is something improbable or unlikely that happens. My favorite movies and books are the ones where something unlikely happens, whether it is the underdog ending up victorious or the seemingly insignificant moment becoming the lynchpin for the entire plot.

That is why this morning I was drawn into the story of Johnny Davis, a recent call-up for the playoff-bound Tampa Bay Rays. So much of Davis’ story is unlikely, which is why I find it so interesting. Some of the unlikely highlights:

And now that the Rays have clinched a playoff spot, there is a good chance Davis will be going to the MLB playoffs as a 29 year old rookie when just 8 weeks ago he wasn’t even playing baseball in the US. How unlikely, and how inspiring! You can read an article about him here, though fair warning, it is not very well-written.

Speaking of unlikely things, MLB just announced their top-selling jersey this season. Do you know to whom it belongs? The Drive’s very own Aaron Judge. That strikes me as unlikely, except for the fact that it is the third season in a row that his jersey has been the #1 jersey sold.

Also unlikely? The Tornadoes passing the Rosebuds this year. But why not? So many unlikely things are happening, it could be something that pundits will write about for years to come, if it can just happen in the next two days. That would be some way to end the 2019 season. Unlikely, perhaps. But unlikely things happen all the time.

PS: I believe this will be my last EFL update this season, unless something unlikely happens and Ron needs me to write one of the final two updates. I have had a lot of fun writing them, and it has certainly helped that my team has been in the race up until the very last days. But your kind words and time spent reading the posts has made me realize what a great community this little EFL hobby has created, and for that I am grateful. It might be unlikely that a fantasy league could occupy such a warm place in mine or anyone’s heart, but you do and for that I am grateful.