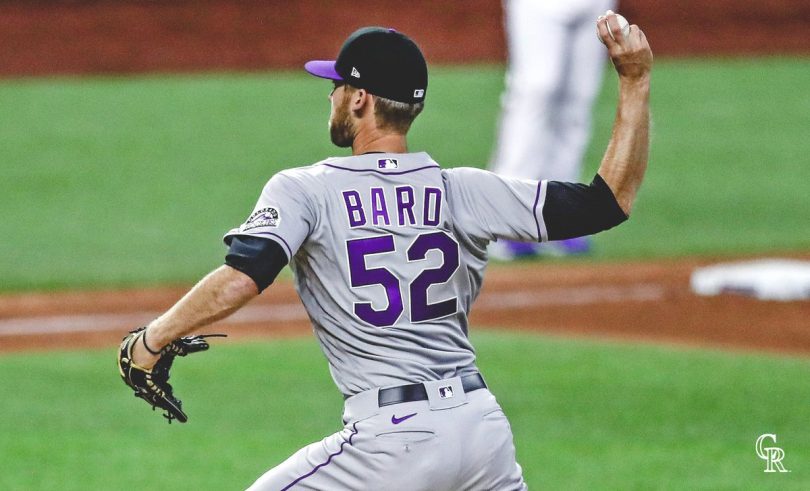 If you type seven years into the informational portal known as Wikipedia, you’ll find reference to several different cultural phenomena. There are songs and movies titled Seven Years, in addition to an itch that supposedly develops in marriages and a war that is named the Seven Years’ War unless you live in the US (The French and Indian War which lasted 9 years, if Wikipedia can be believed) or if you were named Winston Churchill (who called it the First World War).

For some reason, though, Wikipedia hasn’t yet listed what I think is worthy of consideration – Daniel Bard returns to the Major League’s after a seven year absence. His story is quite incredible, and instructive for each of us if we have ears to hear. Bard made his MLB debut with the Red Sox in 2009. That year was my last living in Boston, and I remember the pomp and circumstance surrounding this young fireballer who was making his starting debut against Justin Verlander of the Tigers. Bard went just over 5 innings, gave up one run and got the win. His stuff was electric before it was normal for there to be 100 MPH pitchers seemingly found under every rock.

It wasn’t long, though, before he began to mysteriously decline. What onlookers describe as a case of the yips, Bard has talked about it being much more than simply not being able to throw a strike. The psychological battles he faced, the loss of identity, the sheer torment of losing something that had been so central to his life was excruciating. The Red Sox DFAd him in 2013, and he began to bounce around to 5 different teams, nothing ever changing.

Then, in 2017 at the age of 32, he retired and joined the front office of the Diamondbacks. He found a niche there that allowed him to work with players and their mental struggles (which he knew all too well and therefore could empathize) and was really loving his work.

Sometime during his tenure in the D-backs front office he realized all the things that had plagued him as a pitcher the past 7 years were gone. He decided one last time to give it a chance.

Last night, after 7 years away from the game of baseball, Bard won his first game as a member of the Colorado Rockies. He topped out at 98.7 MPH, gave up 2 hits and walked off the mound as a winner.

It’s a feel good story, and one that has helped me to think about things like identity, perseverance and tenacity in my own life. How long can I persevere through an unknown like Bard did?

I love that in his retelling of his 7 year trial (the 7 Year Pitch?) he says that two things helped him – his family, especially his wife and children, and his learning to practice empathy. Relationships and empathy led Daniel Bard back to his sweet spot after having lost it, inexplicably, seven years prior. In this year of 2020, with the pandemic, with an upcoming presidential election cycle, with jobs changing and our normal routines upended in ways that have been and will continue to be difficult, may we also seek to find solace in relationships and in empathy.

That just might help our lives and our world return to its sweet spot. And that would be a victory.

I read this morning that 22/30 MLB teams are 1-1 after the first two games. Someone forgot to tell the EFL that we are supposed to be competing with MLB teams. Looking at the standings today shows that 7 of us have begun the year in dramatic fashion. Some of us are barely producing any runs, others are allowing several games worth of runs in just two days. Either way you look at it, it’s not good. But there is one team shining a light on the path forward, and it’s a name that is etched too many times on the EFL trophy. Thankfully there are several newcomers to the top of the league, which is refreshing. It hasn’t escaped me that on the hottest day of the year in Oregon thus far, the top four teams are all named after things we might find solace in to escape the heat (hey, a nice plate of cheese and pears on the banks of a river to which you drove sounds nice, right?). Don’t forget – find your individual stats, including aggregates for the day, on our stats page.

Pittsburgh (W, 5-2) No one really stood out for the Alleghanys yesterday. Soler hit a HR, and Jon Gray threw almost 5 IP and gave up only one ER. Both of those certainly helped, but their win was a team effort – no one was awesome and no one was awful.

Peshastin (W, 6-5) In light of his friend and fellow phenom being sick, Victor Robles decided to step in and bring his Pear team to victory. Robles went 3-4 with a 2B and a HR to overshadow two teammates (Maldonado and Gallo with two hits apiece).

Cottage (L, 4-9) Cottage management informed us early this morning that JP Crawford should be mentioned. Crawford went 3-4 with 2 3Bs, which is a very rare occurrence, and worthy of mention in this space. Some other Cheese had performances that are not worthy of mention, and so we won’t tell you about Taijuan Walker’s day…

Kaline (W, 1-(-2)) The Drive’s pitching staff carried the team yesterday, throwing a total of 19 IP and giving up only 6 ER, and ERA under 3. I can think of a few teams in the league who would do almost anything to have a line like that right about now…

Flint Hill (L, 2-3) Javy Baez got a couple of singles (and almost started a brawl, but they aren’t allowed this year), but Steven Matz won the day (though not the game) by going 6 IP only giving up 1 ER. This team was expected score a lot of runs, but so far pitching has been the highlight of the 0-2 start.

Canberra (L, 5-12) Canberra was hurt by a lack of IPs, because what they got was good. In fact, they have only had 3 total innings pitched in 2 games, which is a recipe for what you now see – too many runs allowed to overcome.

Bellingham (L, 6-11) I personally watch Hanser Alberto destroy the Red Sox yesterday, which made me unhappy. Everything he hit was hit hard, and he ended the day 3-5 with a 2B. But the pitching was non-existent, and too many replacement runs were allowed.

Haviland (“L,” 5-4) The Dragons got some good hitting yesterday from Amed Rosario (2-4 with a 3B) and Brandon Lowe (2-4 with a 3B), and some hope that their draft pick Jesus Luzardo will be what they need him to be, getting 3 scoreless innings from him.

Old Detroit (L, 3-7) Well, both the hitting and pitching for the Wolverines was not very good. Two Chicagoans hit HRs (Jimenez and Schwarber) but that was about it for the team. And the pitchers gave up 5 runs in 9IP, which wasn’t enough.

DC (“L,” 1-0) The Balk pitching has been very good to open the season. Yesterday they had a team ERA of under 2 (1.80) over 20 IP. But only two players got any hits, and only one player got more than one hit – Asdrubal Cabrera went 3-4 with a 2B and a HR, just enough to lead his team to a win (well, it will be a win at some point in the next few days).

Portland (L, 5-13) The Rosebuds, on the other hand, have not been pitching well to open the season. They have given up 24 ERs in 2 games, and no matter how good your hitting is, that is hard to overcome. Their hitters shared the work, with 5 different players getting one hit – all but one of them singles.