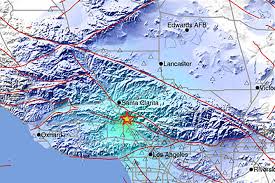 This morning at 4:29am a 4.2 magnitude earthquake shook southern California. To my friends and family who live in CA, they talk about earthquakes as though they are as normal as traffic jams and consistently sunny weather. Even their MLS team from San Jose are named the Quakes. How cute!

But I don’t believe them.

When I was in middle school I remember experiencing my first and only (so far) earthquake in Newberg, OR. Perhaps others of you have memories of these tremors (there was, to my recollection, an aftershock or two after the initial quake). It was terrifying. Not exciting. Not interesting. Terrifying.

There has been much talk of a giant earthquake that will happen along the west coast, strong enough to cause significant damage to homes and buildings, and even human casualties. As I think about the prospect of this giant earthquake, I think the thing that is simultaneously unsettling and insignificant is that no one knows when it will happen. I could stock up on canned goods, a generator, and other survival items and never have to use them in my lifetime. Or tomorrow morning the headlines could boldly proclaim the story of an earthquake that caused the entire coast range to fall into the ocean, making Newberg a coastal town (I suppose in this scenario my home value would increase and therefore this earthquake would serve as a positive moment in my life…if I survived).

For all of these reasons, and a few more, I don’t like real earthquakes, and I don’t believe anyone who tells me they aren’t bothered by them. But I DO like talking about metaphorical earthquakes, and perhaps a few things that happened in MLB yesterday might qualify as one of these:

Take this, for example: LA wins in 13 on MLB’s first leadoff 2-run HR. I don’t know if you’ve seen any games that have gone into extra innings, but it is quite interesting to see a runner start on second base to begin an inning (a new rule just for this season). Some teams have elected to bunt the runner over to third in hopes of him scoring on a fly ball or ground ball. But last night the Dodgers and Astros eschewed all logic and just swung away for 4 entire extra innings, hoping for a dramatic end. And they got one! The first ever lead-off/walk-off 2 run HR in the history of the game. And for all the high-priced stars on the Dodgers, it was a man named Edwin Rios – a Rosebud – who is making half a million dollars this season.

Or this: Cubs turn triple play … or did they? The Cubs turned a triple play last night – their first one since 1997. It was a hot smash caught by a diving Bryant at third, who then stepped on third to force out the runner there before throwing to first to force the runner at that base. But replay showed the ball actually bounced before going into Bryant’s glove! According to MLB rules, it is a non-reviewable play. So the Reds had the bases loaded and no outs, and got nothing for it. Thankfully, for Reds fans, it didn’t matter because they still won, 12-7.

Finally, this: Nats notch wacky road win in home ballpark. The Blue Jays can’t seem to catch a break this season. First, their country kicked them out, leaving them without a place to play their home games. After exhausting every other possibility, they ended up agreeing to play their home games in Buffalo, though the stadium isn’t quite ready to host MLB games. So last night, when their phenom Nate Pearson made his MLB debut, they played in Nationals Park against the Nationals, but the Blue Jays were the home team. As the article states, even the automated crowd noise cheered for the Blue Jays more than the Nationals. In the end the away team won in their own ballpark, which in my mind qualifies as weird, if not earth-quaking.

How about our EFL teams? Let’s check in on their quakiness…

Cottage: W, 7-5 (.233, .410, .467; 12.4IP, 7ER, 5.08 ERA) The ground trembling under the Cheese feet was due to an incredibly high number of walks – 8 total, to overshadow 7 hits. Their batters just kept taking pitches until they lumbered down to first base, time after time. Home run trots from two LA players – Ohtani and Seager – greatly helped their walkers. Combining the trotters with the walkers was enough to overpower the average pitching performance from the staff, even though Chris Paddack did his best to create some waves (5IP, 2ER). Richter score: 6.3

DC: DNP, 2-1 (.378, .417, .600; 6IP, 3ER, 4.50 ERA) The DC bats created what to many sounded like thunder (a much more normal occurrence in DC than an earthquake), however, it was actually the earth rumbling and not the skies. Their batters got 17 hits on the day, led by Pete Alonso who had 4 hits. They sent 12 batters to the plate (their lineup is so good it is difficult to pick just 9 batters) and 11 of them got a hit. How frustrated must they have been to know that it was all just a scrimmage, though, since the Marlins continue to hold a lead in the NL East, even though they are quarantined in a Philadelphia hotel. Richter score: 6.8

Canberra: DNP, (-2)-(-5) (.129, .182, .194; 6.3IP, 0ER, 0.00 ERA) The Roose were bent on making the ground move through reduction – in both their runs scored and runs allowed. With the same fate as the Balk, their hitters decided to approach the scrimmage with a little less intensity, turning in numbers worse than replacement. There was one thing mildly interesting about the Canberra day – Vlad, Jr. was struck out by Max Scherzer – an event his father, Vlad, Sr. experienced 10 years ago. Richter rating: 1.5

Old Detroit: W(-1), (-6)-(-6) (.097, .094, .129; 5IP, 2ER, 3.60 ERA) I miss updates from Ron, though I know he is engaged in more important things right now. But can you imagine how Ron would have written about his team today? His hitters went 3 for 31 with 11 Ks and 0 BBs. I am amazed at how often this happens in the EFL. We have players from many different teams on our teams, all facing different pitchers. And yet, so often the miserable performances will congregate on one day. What are the chances that across several games all of Ron’s hitters would together have such an abysmal day? Thankfully the Wolverine pitcher, Andrew Heaney, did a great job. Richter rating: 2.2

Portland: W(-1), L1, (-7)-(-1) (.103, .182, .179; 3IP, 2ER, 6.00 ERA) Maybe if you read through the write up for every team in succession you don’t feel so bad for the Rosebuds, because compared to the Wolverines they had an OK day. But by just looking at their day without seeing any others, you get the feeling that the Rosebud management isn’t too pleased with him teams’ performance. The Rosebuds were the EFL beneficiary of the 2-run walk off HR by Edwin Rios, but otherwise their line was 3 for 38 with 13 Ks. Yikes! And unlike the Wolverines they didn’t get good pitching to help them feel just a little better. Richter rating: 2.0