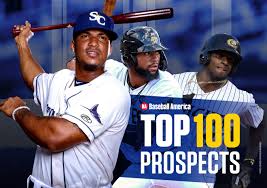 This season is 25% complete – can you believe it? Sure, some teams (Cardinals, Marlins, Phillies) are going to have to play about a million doubleheaders to make it to 60 games by season’s end, but there are roughly 45 more games for each team to make a move. Even MLB.com is starting to talk about teams that are postseason locks after 15 games!

However, it’s also fun to think about the future – not just the 45-game future, but the next several seasons future. The best way to do this in the EFL, in my opinion, is to see how many off the MLB Top 100 Prospects we have on our teams (not deb contracts, but actual multi-year contracts). You can find the list of the Top 100, which includes local Jesuit HS star and this year’s Phillies draft pick, Mick Abel coming in at 99 out of 100. So, before we name an EFL champion this season, we can name an EFL champion right now:

The prospect champion? Haviland Dragons, by a landslide. So it’s decided that, since you can only win one championship a year, this was yours. And look! You’ve done a nice job letting us catch up to you in the EFL standings.

9 of the 11 EFL teams are within 3 games of first place. That’s 82%! For comparison, only 27% of MLB teams are within 3 games of their division leader. What is interesting is that in the EFL only 36% of teams are .500 or better, while in the MLB 47% of teams are .500 or better. This means that, thankfully for all of us, there isn’t a team or two running away with the league, which has to help everyone feel good about their chances even 25% of the way through the season. When is the last time we could say that?

The Dragons had a chance to really create some separation this weekend, but failed to do so this far (what a nice guy!). Sailing on the strength of a few days of excellent pitching and very good hitting, the Dragons didn’t do either of those things these past two days. The hitters combined for 17 Ks, 9 BBs, and 7 hits (1 2B, 1 3B, 1 HR – what symmetry!) – more Ks than hits and walks combined. Glasnow didn’t help matters either, giving up 4 runs in less than 3 innings to the Yankees – a double hit.

The Tornadoes spun their way back in to second place (barely) based on hitting volume, which replaced a lot of replacement PAs, and did so at a much better clip than those horrible replacement players. The batters delivered 25 Ks, 10 BBs, and 24 hits (7 2Bs and 5 HRs). The pitching, on the other hand, was not good and also non-existent. Giving up 27 runs in 3 games (9 runs/game) is not going to be enough to propel any team to a championship.

One of the oddities this year is that a team can go two days in a row with no games. In this instance, the division leading Cubs did not play this weekend because the Cardinals, their opponent, is battling a COVID outbreak. So the Cheese amassed a large amount of PAs and barely any of them were used. A quick check of the monthly stats shows the Cheese now with 64 surplus ABs, second only to perennial surplus leader Kaline. So, the Cheese slash line of .250/.322/.425, which is horrible, still produced 0 runs. How odd! The Cheese racked up 27 Ks, 9 BBs and 20 hits (2 2Bs and 4 HRs). All three of their starting pitchers gave up at least 3 runs, but again, it didn’t really matter since the Cheese didn’t have any replacement innings to replace (however, replacement ERA is better than what their pitchers produced!).

The Alleghenys could be nicknamed the yo-yos, at least for this month of August, because they have been going up and down and up and down the standings seemingly every update. The Alleghenys were led by two OFers, Jorge Soler and Byron Buxton, who combined to go 5-16 with 4 HRs. The rest of the team, however, did little. Altuve who has consistently been a BA machine, is hitting .177 on the season, either proving that he was very dependent on garbage can bangs or that the pressure of proving he was not dependent on them has made him press in ways he has not had to do in years past. The Allegheny hitters combined for 18 Ks, 4 BBs, and 15 hits. The pitchers did what most every EFL pitching staff did the past two days – stunk. They were led by Derek Holland who gave up 4 HRs in his start before recording an out!

The Drive provided what no one above was able to provide – a great pitching day – though not enough innings to turn it into a win. Aaron Civale led the way with 1ER allowed over 7IP. Their offense, however, sputtered a bit. Aaron Judge continues to have a monster season, going 4 for 12 with another HR. But no one else did much of anything to help him out, and so the Drive dropped two games. Their batters combined for 29 Ks, 9 BBs, and 20 hits (5 2Bs and 2 HRs).

Canberra had the best two days in the league, creating a 3 game swing and moving from 9th place to 6th place, now just 1.7 games out of first place compared to 3.3 two days ago. They were paced by some excellent pitching, particularly from Kolby Allard and Blake Snell, who combined for 8IP and 0 ER. Their hitting did enough to not hurt them, though not much more than that. Vladito and Starling Marte both added 3 hits apiece. Their batters combined for 20 Ks, 10 BBs, and 15 hits (7 2Bs and 3 HRs).

The Pears put together the second best day in the league, gaining almost 1 game on the Dragons and now sitting just 2.2 games out of first place. The did what not team above them was able to do – put together good pitching AND good hitting. Julio Urias threw 4IP and gave up 1ER, and Marcus Semien and Jesus Aguilar combined to go 8 for 19 with 2 2Bs and a HR. Their batters combined for 15 Ks, 10 BBs, and 20 hits (5 2Bs and 4 HRs).

The Balk were able to gain .3 games on the Dragons, and did so through doing just enough to eke out a fake win. Their hitting was not that great, however Matt Chapman went 4 for 10 with a 2B and a HR. Overall their hitters combined for 15 Ks, 6 BBs, and 14 hits (5 2Bs and 3 HRs). Their pitchers were good, except for Ivan Nova. Remove his line and it’s probably a legit win for the Balk.

The good news is that even with a 2 loss day, the Rosebuds only lost .1 games off the leader. But that might be the only good news. Their batters combined for 18 Ks, 9 BBs, and 16 hits (2 2Bs and 3 HRs), led by the newly acquired Jake Cronenworth (2 for 5 with a HR and 0 Ks). Their pitching was a different story, though. Michael Wacha gave up 4 runs in 5 IP, but Lewis Thorpe did the most damage, giving up 3 ER and getting 0 outs – an infinite ERA.

The Cascades gained over 1 game on the leading Dragons, on the strength of a complete day from their batters and their pitchers. Their hitters combined for only 8 Ks (the best on the day), and added in 7 BBs and 14 hits. Their best performances came from Kevin Newman, Bo Bichette and Hanser Alberto, who combined to go 11 for 28 with 5 2Bs. Their pitching staff was led by the resurgent Tommy Milone, who pitched 6 innings and gave up 0 runs.

The Wolverines had the biggest swing in the league (5 games), losing 1.5 games on the leading Dragons. Their hitters combined for 17 Ks, 4 BBs, and 7 hits (1 3B and 1 HR). Their pitchers produced similar numbers, led by Eric Lauer’s 6 ER in 3 IP. The good news is that they can only go up (have I already said that?). Maybe you can console yourself by knowing you have the top rated prospect on your team?