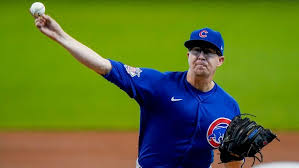 Did you know there were two no-hitters thrown yesterday? I imagine you saw, or at least read about, the no-hitter thrown by Cubs pitcher Alec Mills. He went 9 innings yesterday against the Brewers and gave up 0 hits. In fact, only one ball was hit well, and Ian Happ made a really nice over-the-shoulder catch in centerfield to preserve Mills’ feat. The fact that Mills threw a no-hitter is pretty astonishing.

The 28 year old RHP had a career ERA north of 4 before yesterday’s outing, and was making only his 15th start in 3 years. His fastball sits at 90 MPH, and his secondary pitches, especially his curveball, are good, but not spectacular. His storyline includes being a walk-on in college, and in his interview after the game you could tell he is someone who just works hard at his craft and his hard work turned into a moment of excellence he will never forget.

But there was another no-hitter thrown yesterday that NO ONE is talking about. That’s right, an EFL team also was no-hit, and I get to break the story. Here is the headline:

In this case I did not bury the lede, so now you all know. It was, indeed, the Tornados who were no-hit yesterday. In 40 plate appearances (which is more than the Brewers got), not a single ball fell in for a hit! We did manage to collect 9 walks, and even notch a W on the day, though it was a dubious EFL, “W.”

So there you have it – there were two no-hitters yesterday. It’s only the second time it has ever been done – the first on June 29th, 1990, when Fernando Valenzuela and Dave Stewart both threw one. Now, it has happened again.