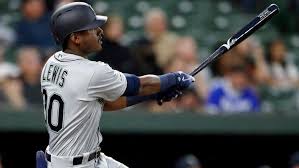 If you were building an EFL fantasy team, and I offered you either the first list or the second list for one of your expansion picks (and salaries were not an issue), which list would you pick?

Sure, Kyle Lewis is a fun player. And is Lourdes the Gurriel who was hot at the plate earlier this season?  And Ben and I once saw Joe Panik play for the Volcanoes when he was their super-prospect stud (he went 0 for the day).  Tommy Pham, Robbie Grossman, Rougned Odor — this group has an aura of disappointment and decay about it.

It would be hard to find a better outfield than Winker, Betts, Stanton.  Donaldson and Altuve are still elite infielders, and Diaz could ably fill a utility role.  It’s an easy pick.

Except yesterday, Joe Panik was the best hitter in baseball, according to Baseball Reference, because he went 4 for 4 with a homer.  And the rest of his group were the 2nd through the 6th best, combining to go 12 for 18 with four homers, three doubles, and four walks.

Sometimes the gold lies at the bottom of them thar hills.