The other day Jamie wrote me an email congratulating me on my EFL championship.  Yesterday he posted what amounted to a concession that the race was over.

Today he sent me a note that said only “come a little bit closer.”  I think it’s a reference to that creepy movie where there’s a clown in the gutter, but I never saw the actual movie, so I’m a little vague about this.

What is Jamie thinking?  I made my last roster move yesterday morning.  I can no longer influence anything about the Wolverines.  Mind games with the management can no longer affect the outcome.

EFL Standings for 2021
OLD DETROIT: W, 3 – 2. (52 PA, .208, .269, .313;  6.7 IP, 1 ER, 1.34 ERA). The Wolverines won last night.  In MLB history, every time the leading team has been 5.2 games ahead with 5 games to go that team has won the race.  Wolverine fans should be celebrating.
Sure, the EFL is different.  We covered that already. But the W’s biggest vulnerability is its thin roster of healthy pitchers.   The Oldies got great news on that front: Logan Gilbert pitched very well (5.2 ip, 1 er), and Jonathan Loaisiga came back from the IL unannounced and pitched a perfect scoreless inning.
Still… once again, the offense was flat.  Yesterday’s roster moves were a big help, since they benched James McCann 100% (0 for 3) and Eloy Jimenez 50% (0 for 4). But the actual players? Some disturbing oddities:
* The Dodgers won last night, 11 – 9.
Will Smith batted cleanup and went 0 for 4.
* The only other Dodger batters —
including 3 pinch hitters — to go 0-fer were PH and impending hall-of-famer Albert Pujols…
and the Wolverine’s hottest September hitter Gavin Lux,
who not only went 0 for 2 to cut his Sept OPS to .976,
but ran smack into the outfield wall and had to leave the game.
Corey Bellinger replaced him and homered his next time up.
* And that pitch diagram atop this post?
That’s Cal Raleigh’s AB for the Mariners in the 5th inning
with a man on first and no one out.
Here it is again for your convenience: 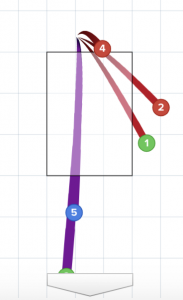