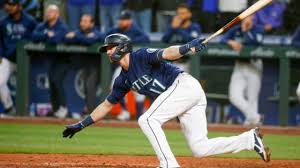 I’m in Seattle now, preparing to go T-Mobile tomorrow with my daughter and son-in-law to see the last of the scheduled regular-season games, with the Mariners still in the mix for the post-season.

Like some (all?) of you, we watched tonight as the Mariners nursed a lead most of the game, only to fall behind 4 – 3 in the top of the ninth on a Jared Walsh three-run home run.  Tornado Mitch Haniger was having a great game — 3 for 4 with a  homer and all three Mariner RBIs.  No one else having been able to get a clutch hit, we counted the outs to see if he would get up again before the game was over.  Going into the bottom of the 8th inning, there were 5 hitters scheduled before Haniger’s spot in the lineup.  If the other 5 all made outs, Haniger would come up with 2 out in the bottom of the ninth.

“I don’t want to see Haniger again,”  I announced. No one here knew my private reason for not wanting to see Haniger again.  I didn’t want him leading some kind of Tornado miraculous charge carrying the Tornados into the EFL lead.  I know, it’s so unlikely, but I  won’t feel safe until the last out of the season is recorded.

But I did have to see Haniger – still in the 8th inning with the M’s still behind 4 – 3 with two out and the bases loaded.  Haniger worked the count full — a harrowing experience with an umpire who several times called “Strike!” on pitches several inches off the plate.  When the count reached 3 – 2, Haniger stepped out. The cameras focused on him. He seemed to be nervous, tense. The next pitch was down, out of the strike zone.  Haniger reached for it awkwardly, and drove a sharp ground ball toward the  hole between SS and 3b.  The ball zipped between them and into left field, scoring two runs (and setting up a third run later).

That saved the Mariners season, for at least one more day.  And it piled a 4 for 5 with a homer and three singles onto the Tornado stats.

But it’s ok.  And it’s ok if Jarred Kelenic keeps swapping the Tornado Hero’s sash with Haniger. They can even share it. I’d give up 4 games of the W’s lead to see the M’s in the postseason.

We’re all Tornado fans today, especially when Kelenic or Haniger are up to bat. They can go wild!  I think I’d enjoy watching the Mariners erase a quarter of their run differential — even though the Tornados are already only 4.3 games back.

EFL Standings for 2021
Old Detroit:  L, 1- 8.  With three days’ of stats crammed into Sept 30, the database is balking at publishing a daily status update, so I can’t even estimate teams’ Saturday-only performance.  However, I a can assure you the standings reflect them.  My Wolverines who were allocated went something like 5 for 29 yesterday with a double, a homer, and 5 walks: .172, .294, .276. And with no pitching, you can easily see the chasm open before the Wolverine’s feet.
Flint Hill: W 2, L (-1); 7 – (-3).  Apparently Haniger’s 4 for 5 with a homer and a season-saving seeing-eye single was fairly typical for the Tornados yesterday.  Kelenic wasn’t useless — he went 0 for 2 with a walk and a painful HBP — but he didn’t keep up the 7 runs per game performance.  If I had infinite time I’d reconstruct the Tornados’ day by hand, like I do pretty much every day for the W’s.  But I am going to T-Mobile in a couple of hours, and intend to spend as much intervening time as possible with my grandsons.
What I CAN tell you is disturbing, but hopefully not disastrous: the Tornados gained a whopping 1.6 games in a single day. Boy am I glad this season’s almost over.
DC: W 2, L (-1); 12 – 2.  Et tu, Balke?  Another double win, lost loss day.  And another huge jump in the standings:  1.5 games. I bet Rob knows what happened.  Rob — care to share? I, for one, would like to know how to do this.
Kaline: “L”, 9 – 7.  The Wizard is always so kind.  His team got a win, but disguised it as a loss, I bet just to soothe jangled Wolverine nerves. Tom — what were the highlights for the Drive?  Kaline only gained 0.8 games on the Wolverines, meaning they’re now separated 0.8 games from their buddies the Balk
Peshastin: 9 – 3.  As you can see, the Pears narrowed their gap behind the Drive from 5.2 to 4.8 games, and erased 1.2 games from their distance to first place.  Phil: what led to such a dramatic gain?
Cottage:  W, 5 – 3.  The Cheese settled for a normal win, and a modest 0.8 game gain in the standings.  Why so easily contented, Dave?  And what did your team do to achieve this win?
Canberra: W, 9 – 4.  The Cannies matched the Cotties step for step, preserving the  0.4 game proximity with their Cheese Buddies*. (* I have a feeling this product may already be available on the market.)  What went so well for your team, Ryan?
”
Haviland: W, 7 – 4.  The Dragons also gained 0.8 games on the league leaders, driving a 0.3-game wedge between them and their Allegheny buddies. How did you accomplish this, John?
Pittsburgh: L, 3 – 4.  I appreciate the empathy, Mark, to lose when the Wolverines lose.  But the W’s lost in humiliating fashion, whereas your loss was a dignified, narrow affair, so you still gained on the league lead.  How did you fine-tune your empathy so craftily?
Portland: W, 8 – 4.  The Rosebuds continued their inspiring rise through the EFL standings, although it means they’ve left  their Cascade buddies behind, bidding to become buddies with the Alleghenys instead.  I dunno, Mark, it seems a little rude to the Cascades.  Although you and the Alleghenys could call your buddyship “Mark Twain.”  Tell us about your adventures yesterday.
Bellingham: W (-1), L 2; 1 -8. Ouch. A lost win with a double loss.  Getting dumped in the cruelest way by those faithless Rosebuds.  Doesn’t it make you want a little revenge at the end of the season?  How did you manage to match the pathetic performance of the Wolverines yesterday, Andre?
Combined MLB + EFL Standings for 2021