Birds on a Wire

One of the reasons that we decided to visit New York was so Karen could revisit the Ground Zero site from the 9/11 attack. She’d seen the memorial plaza under construction several years ago, and wanted to see it in its finished state. So we came down early on a Saturday morning. On our way in we saw these utility wires loaded down with local birds – apparently here to watch the tourists! 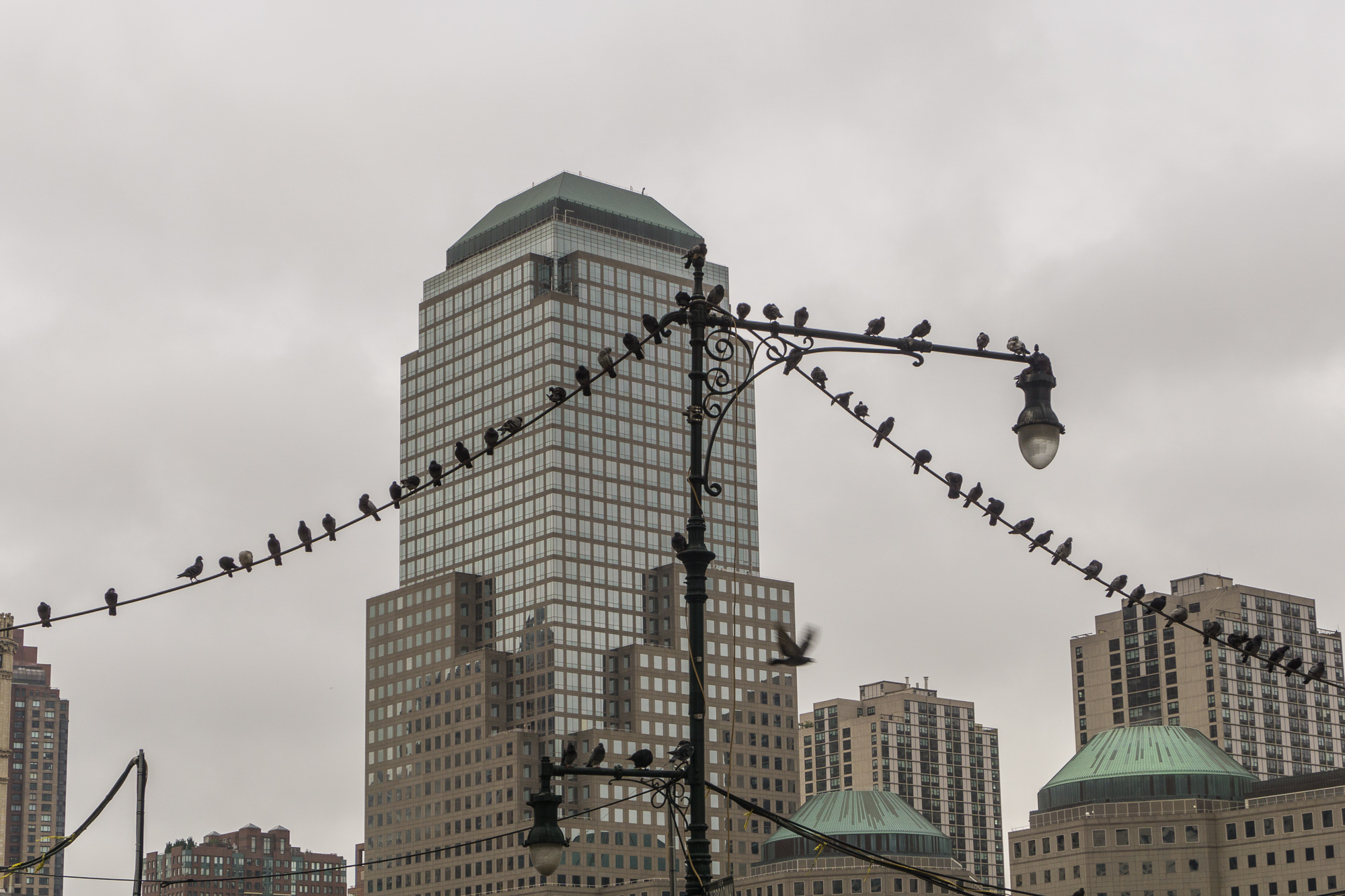 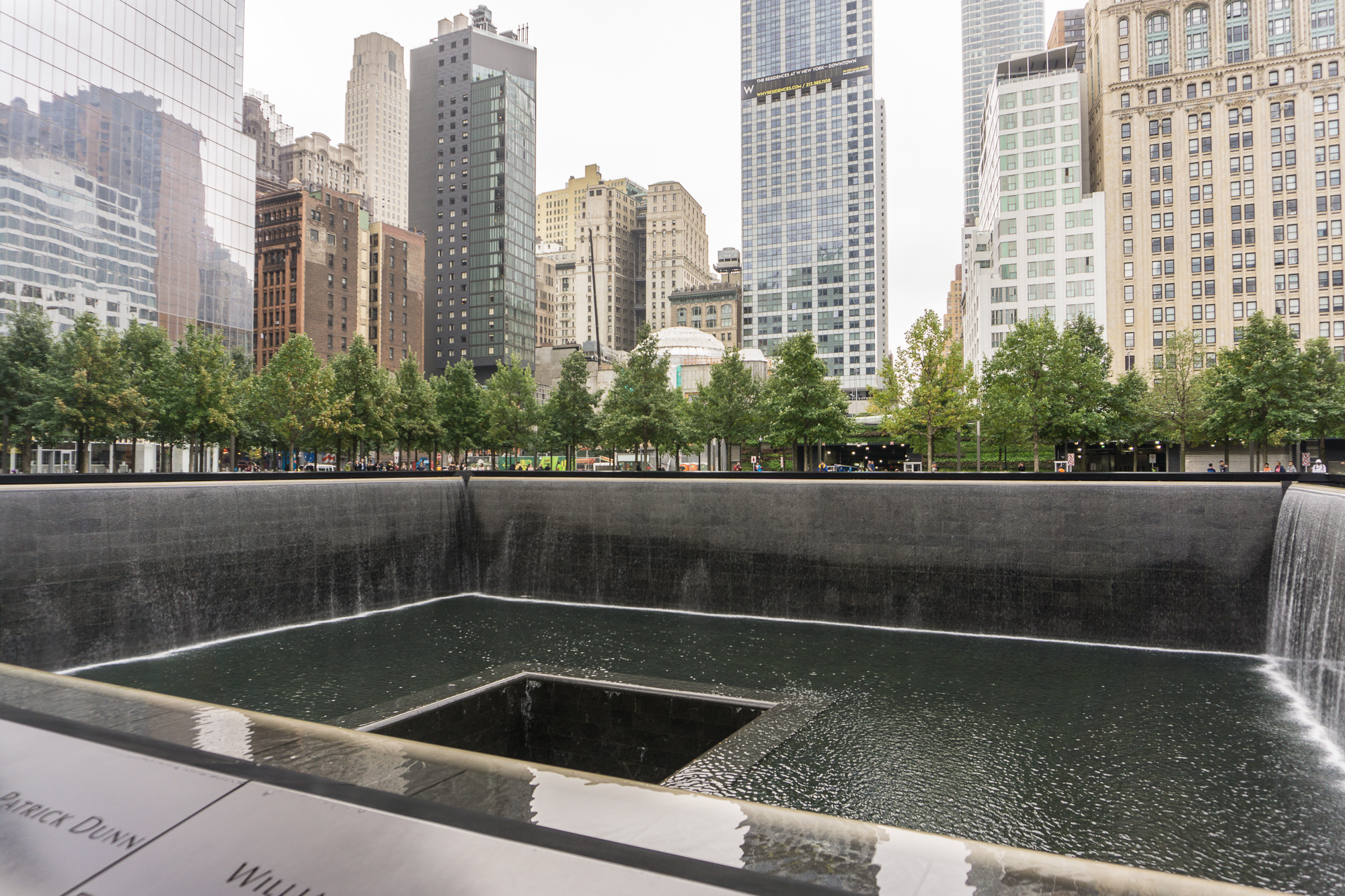 The destroyed towers have been replaced by fountains that are sunk into the ground, big squares that (I presume) occupy the exact footprint of the towers. Around the stone rim of the fountains – one could also call them pools – are carved the names of those who died in the tragedy. It’s all very elegant, and solemn.

On a foggy Saturday morning in October there were lots of people here to visit the memorial plaza. 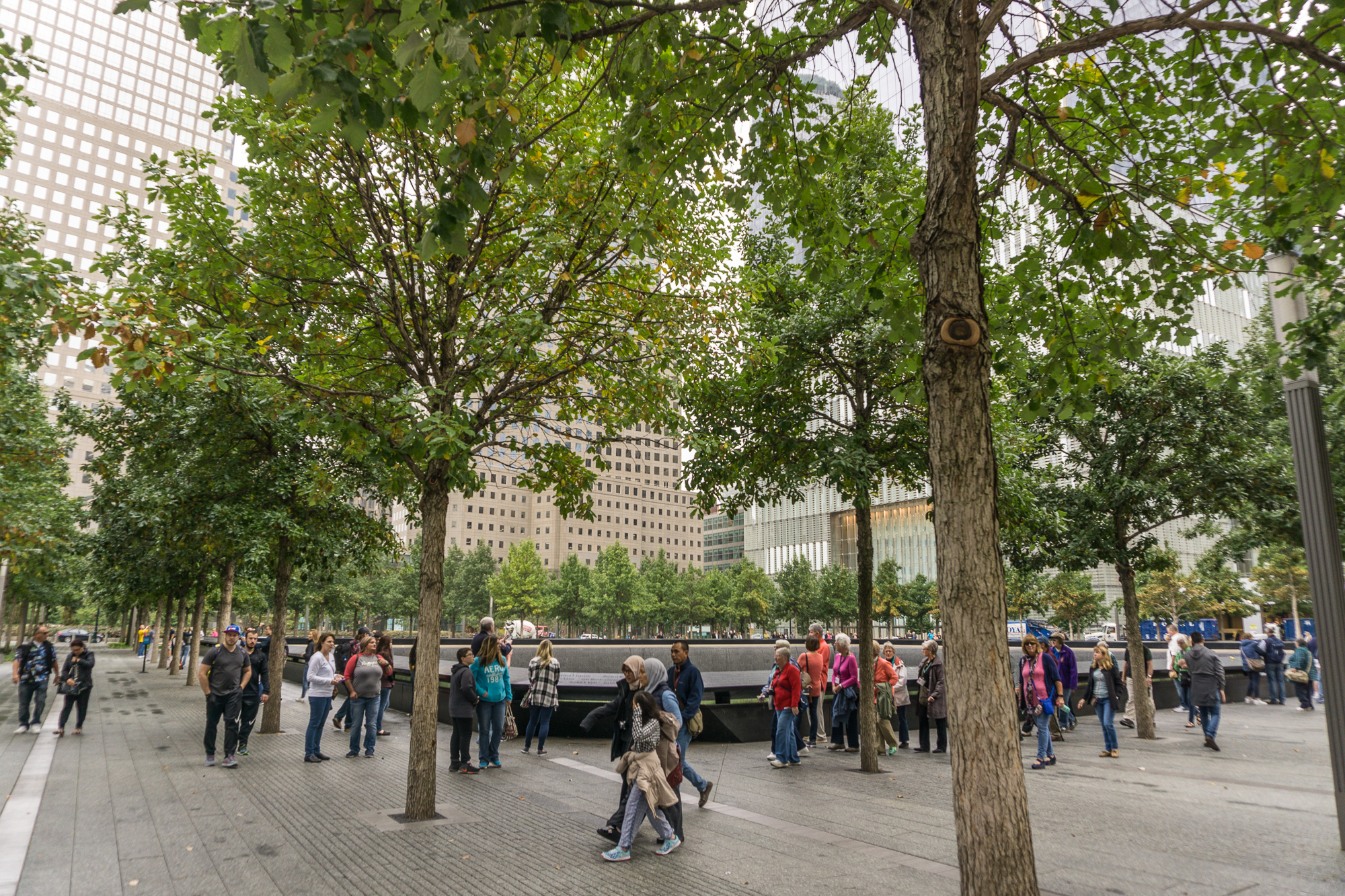 All around the fountains, the names of those who perished in the attack were engraved in the stone barrier.

Neither of us was especially eager to visit the museum, but it was interesting to see. The exterior of the building is covered with mirrored glass panels, set at an angle so that the building appears to be fallen over. The panel edges are not aligned, so the reflections are jagged. The effect is unsettling – by intention, I’m sure. 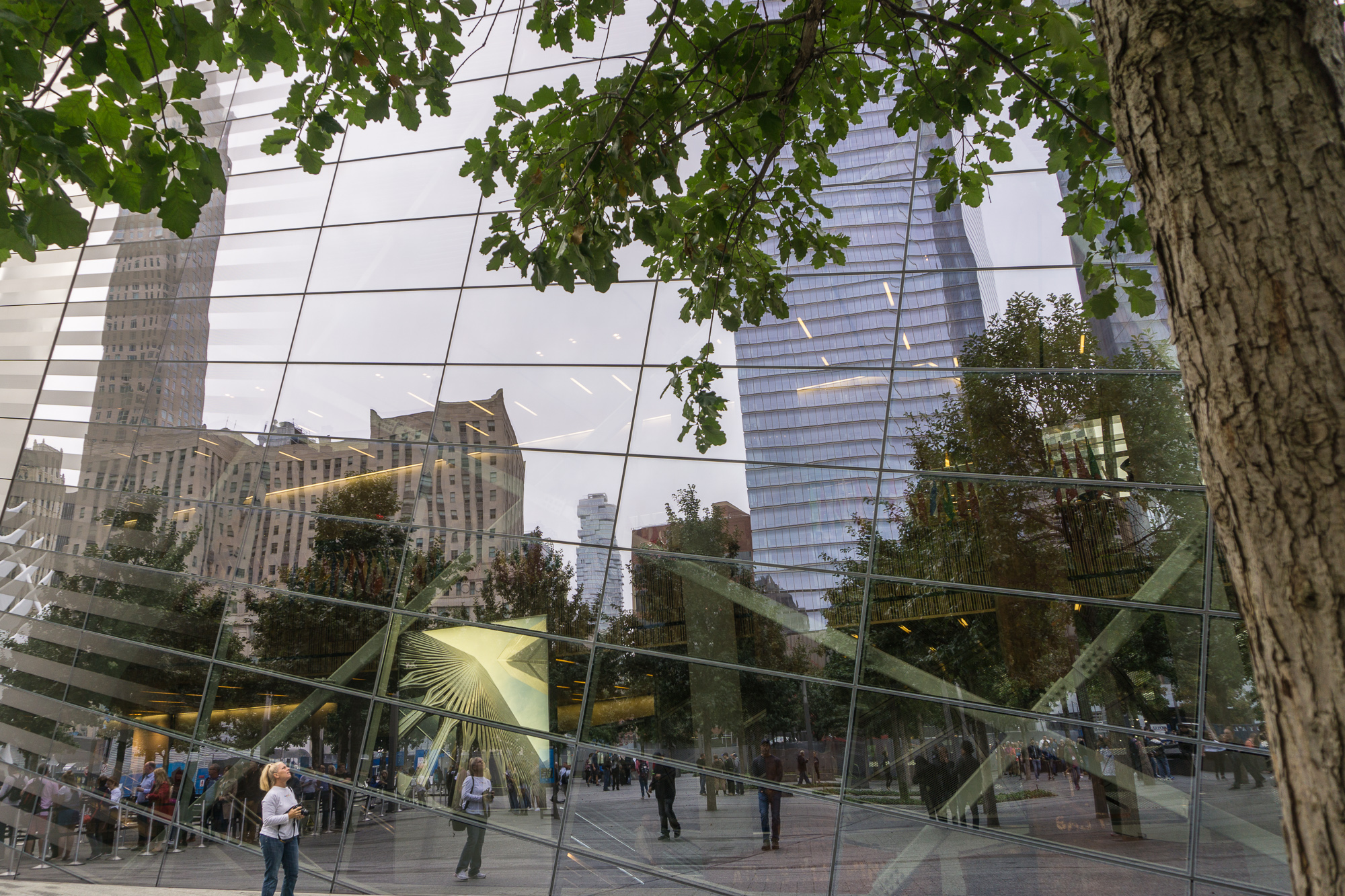 This was the local fire house that was among the first responders to the 9/11 attack. It’s very small! Karen says that this building is new since she was here; the original was pretty beat up.

We were interested to visit this chapel that provided rest, nourishment, and aid to the firefighters who helped respond to the attack. We’d seen pictures (and a borrowed pew) in the state museum in Albany. Unfortunately, the chapel was undergoing restoration and not open to visitors. 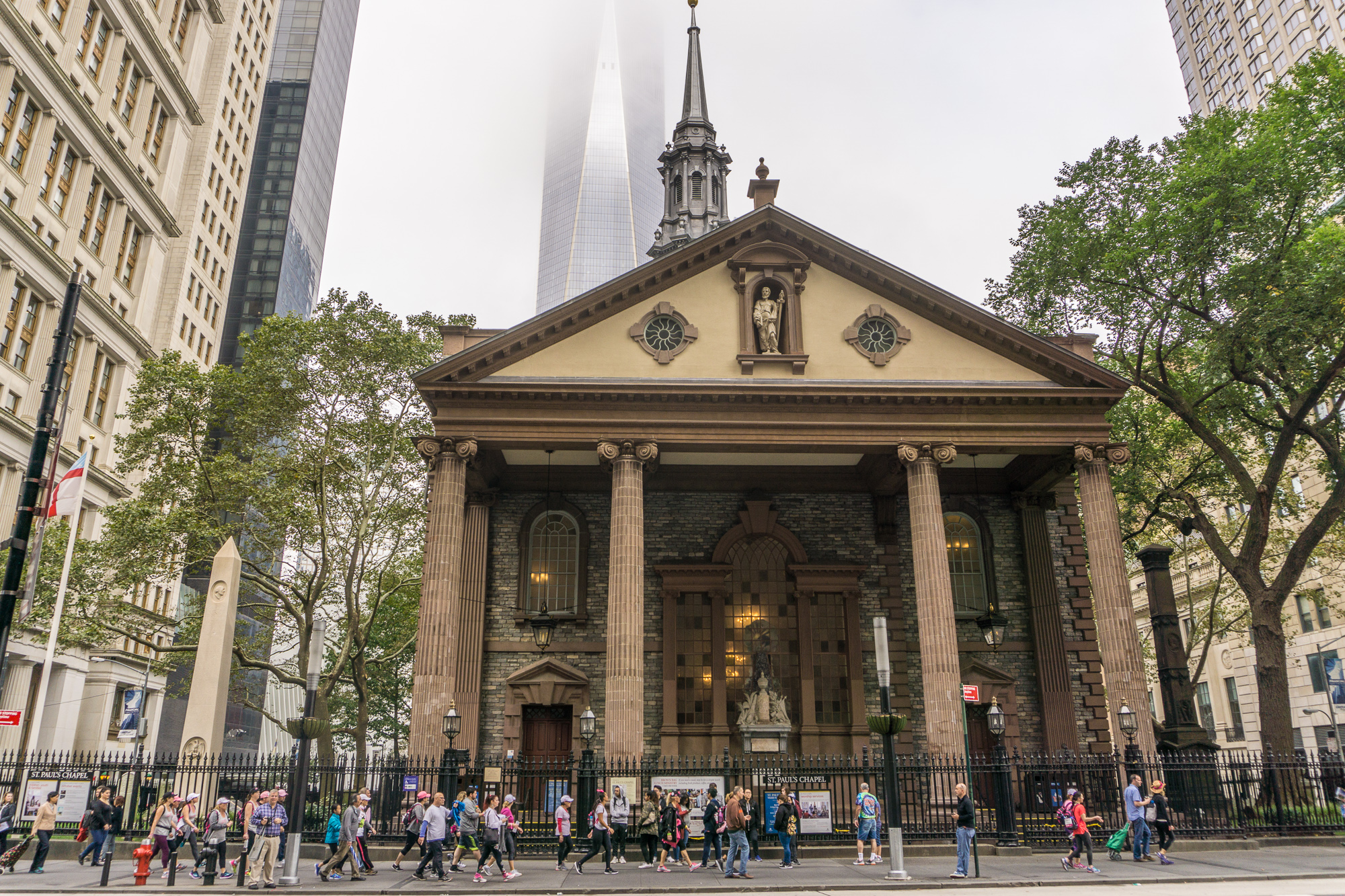 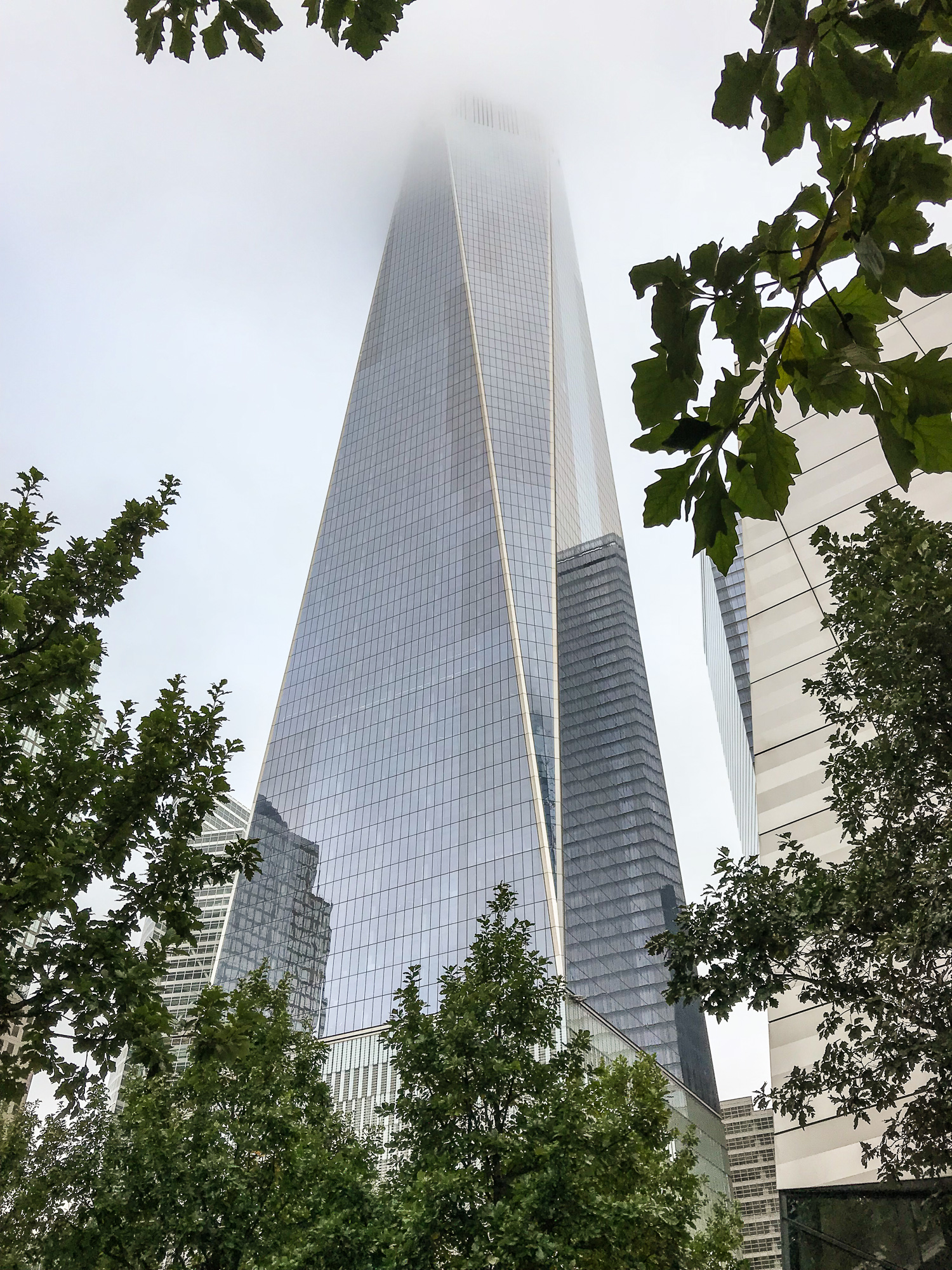 The new World Trade Center Building towers over everything else – indeed, it is the tallest building in the Western Hemisphere. Of course there is a viewing platform, but on this foggy October morning I’m guessing there were few tourists up there.

(click on pictures to see them at full size) 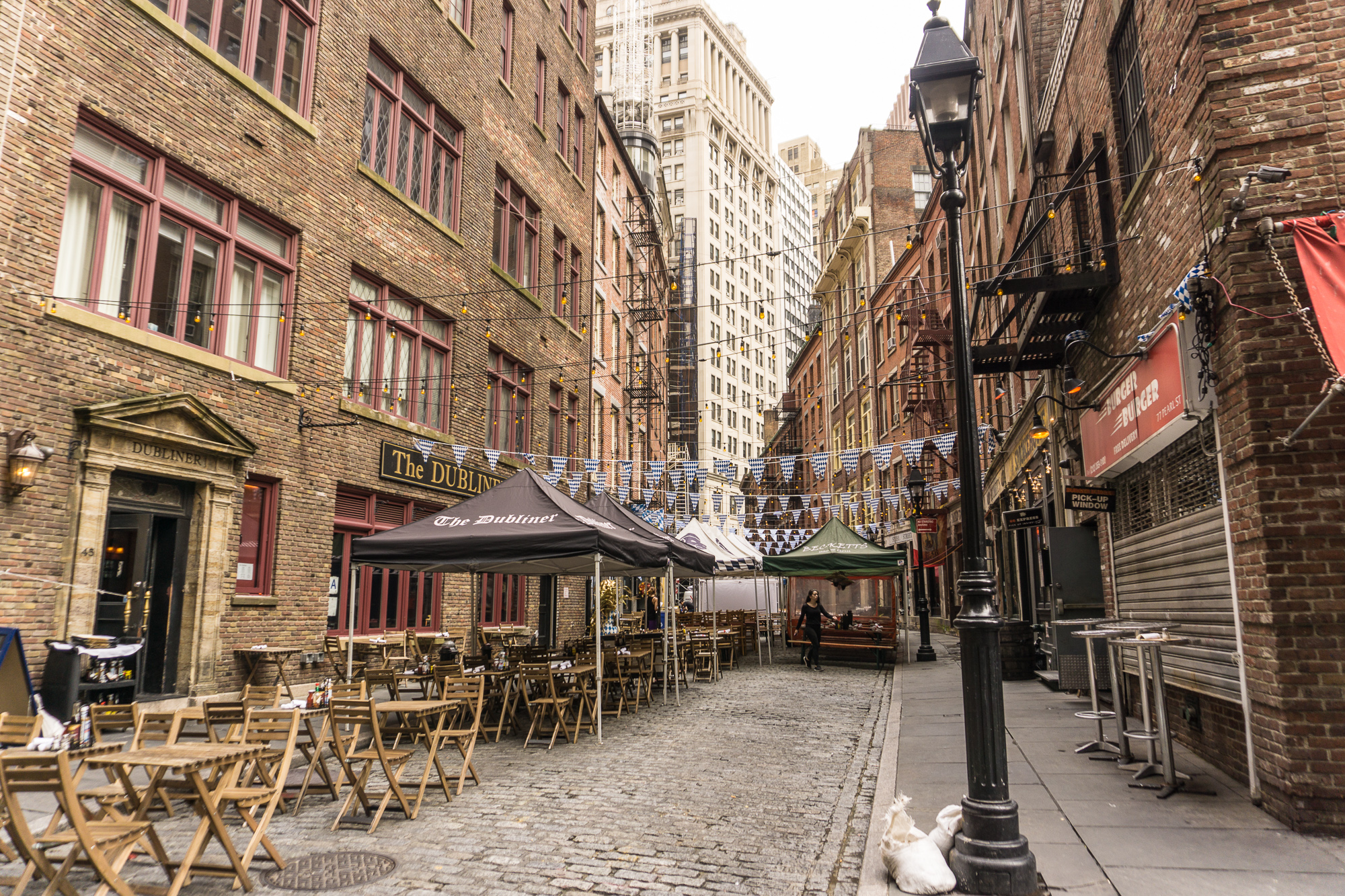 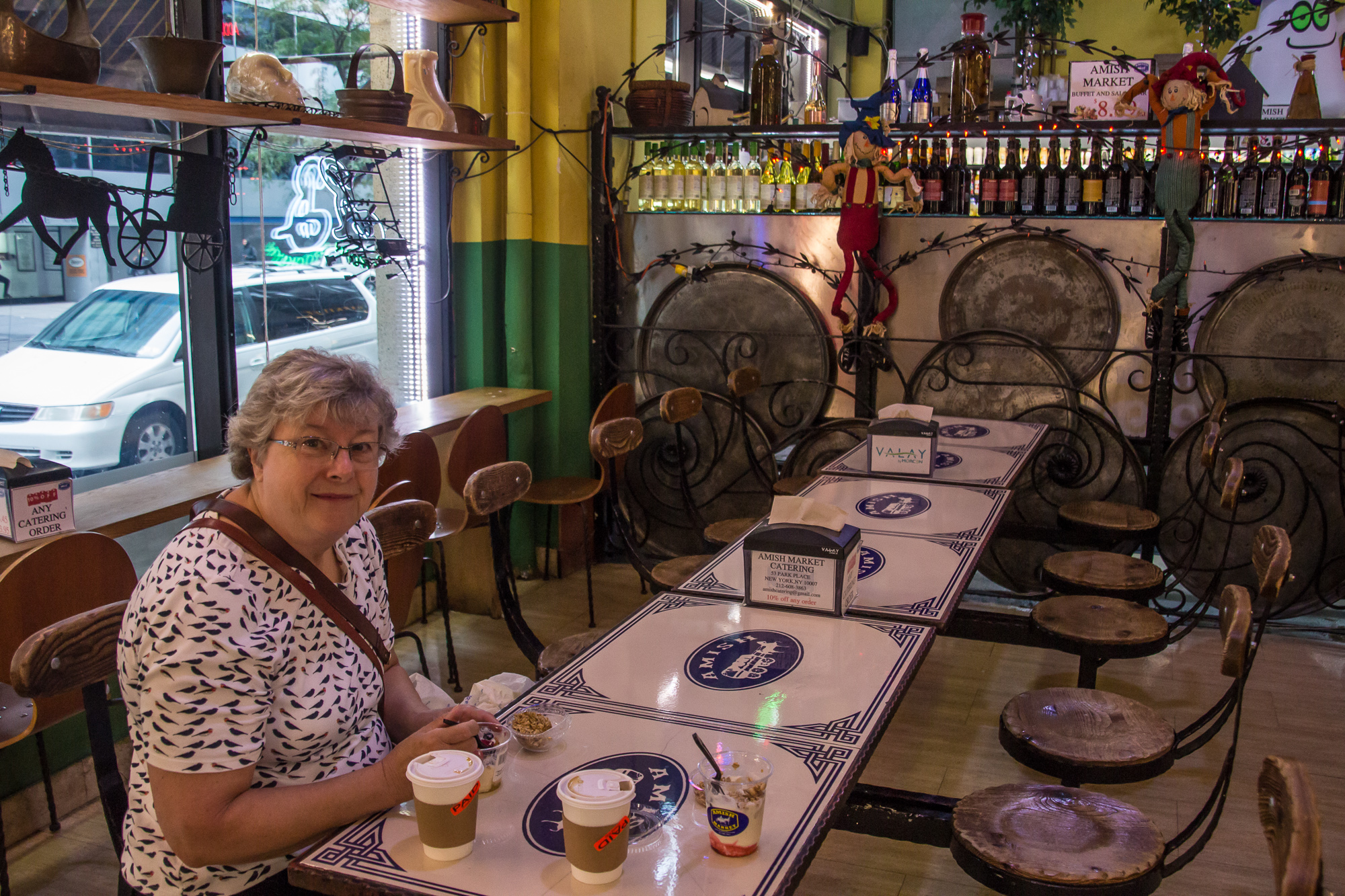 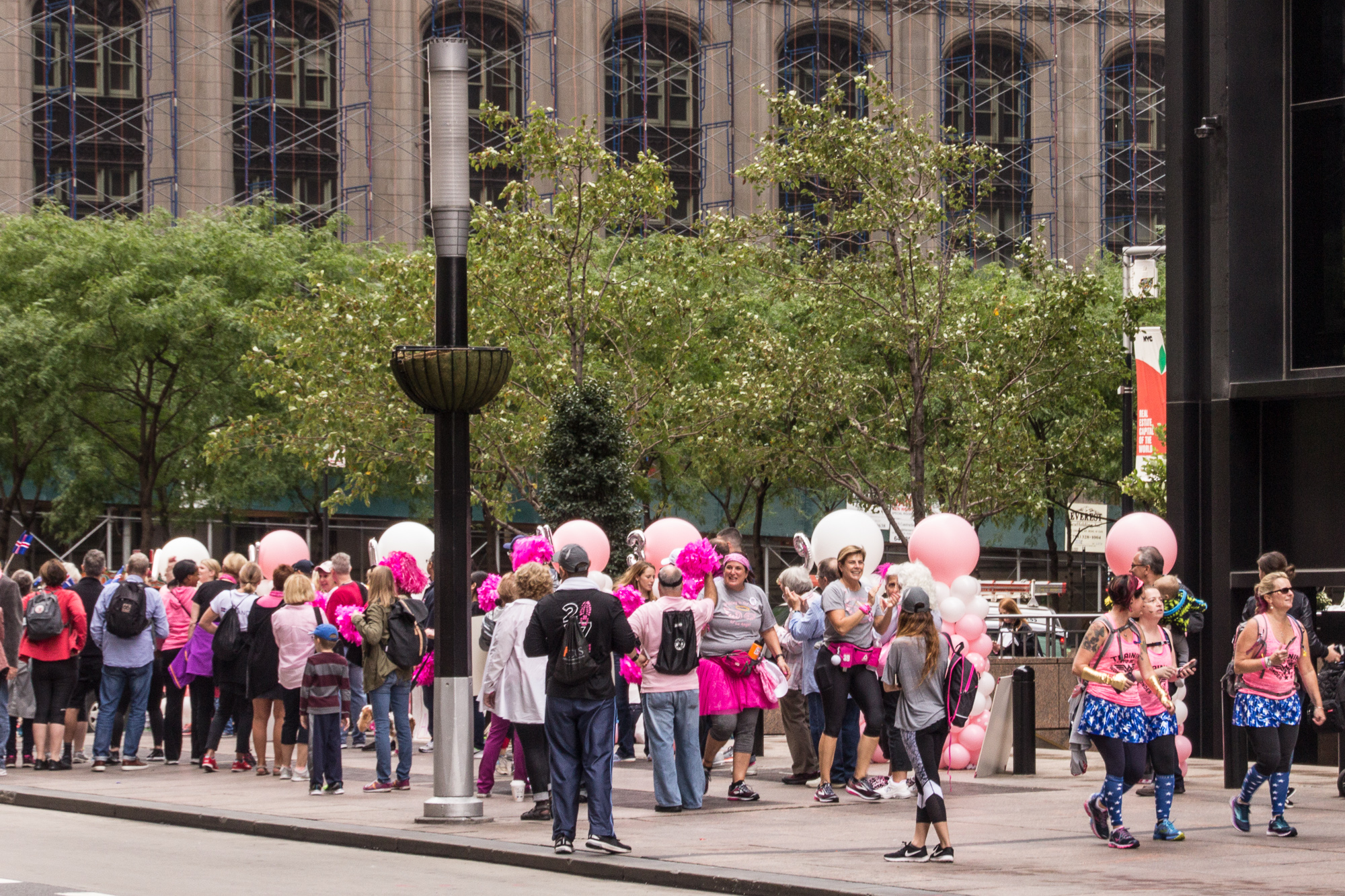 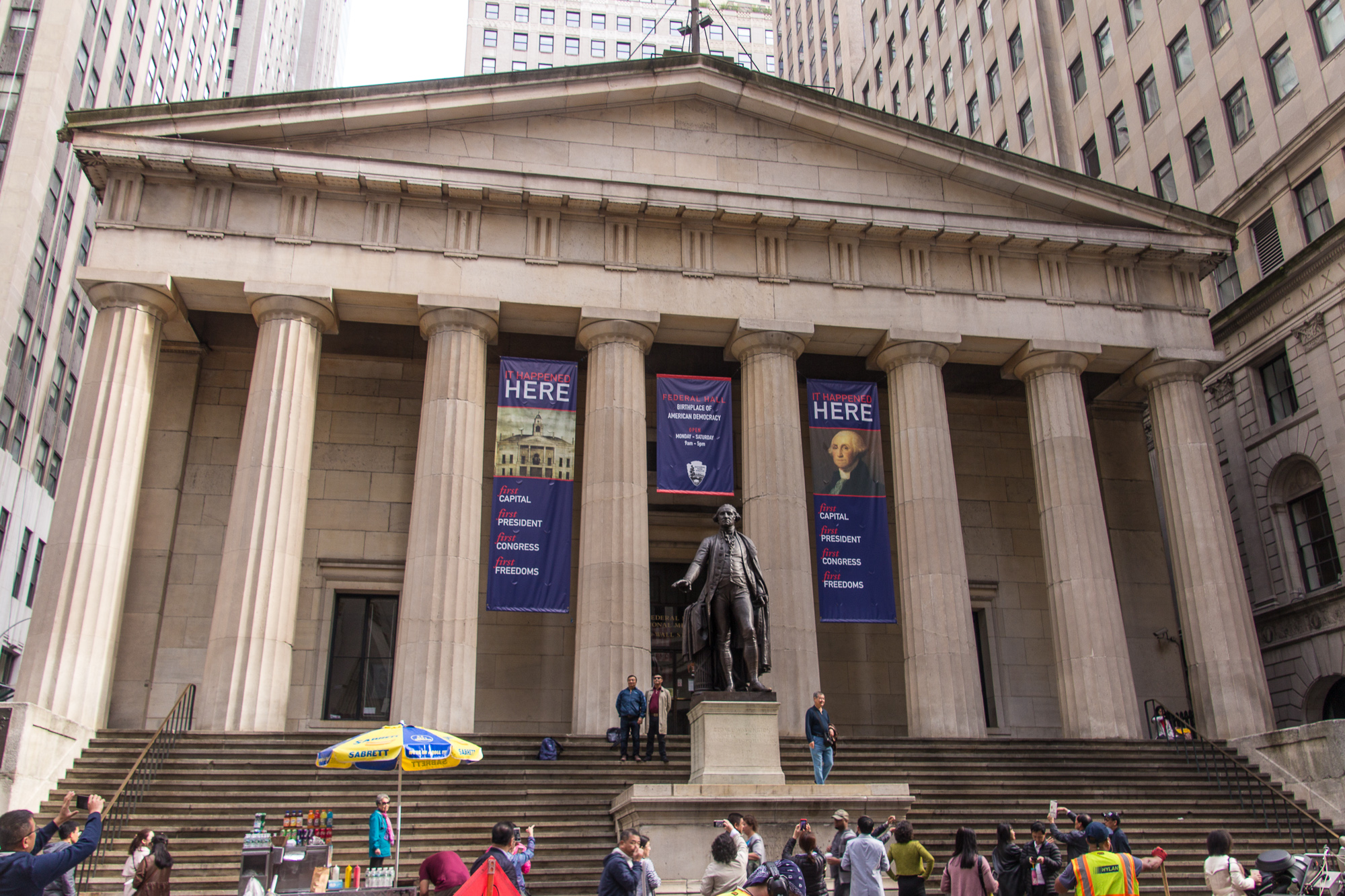 On our way down from the 9/11 Memorial Plaza to Battery Park (where the Statue of Liberty tour boat docks) we decided to take a little walking tour through old New York. It’s near the south end of Manhattan.

If you’ve been to the old part of any city in Europe, you know the look: narrow streets paved with cobblestones. Apparently there is just one such street left in New York. It’s called Stone Street, and you can see it above. It was still early, but the street was completely blocked with chairs and tables under canopies. I don’t know if this was a temporary or permanent condition. But we could still see that this was a beautiful, historic street.

A few blocks away we found a store called “Amish Market”. It wasn’t open yet, except for a small cafe at one end. We stopped in for breakfast. I don’t know if it’s really Amish or not, but it has an interesting look.

On the way over to Wall Street we encountered this pinkish group of ladies marching to support Breast Cancer Research. The first building we encountered on Wall Street was Federal Hall – dwarfed in size by surrounding buildings, but towering over them in terms of historical importance. It was the site of the First Congress of the United States, and of the drafting of the Bill of Rights.

We stopped by the beautiful (and old) Trinity Church. Trinity Church has been on this site for over 300 years and is famous for being the church where George Washington worshipped. The church has beautiful cast bronze doors with six panels each – some have scenes from Bible stories. We found headstones for two famous people in the churchyard: Robert Fulton and Alexander Hamilton. 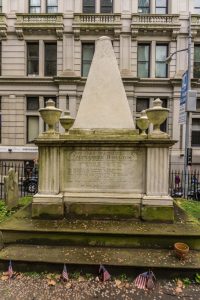 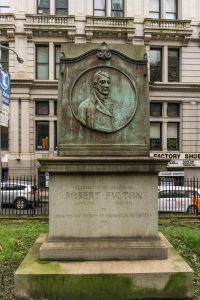 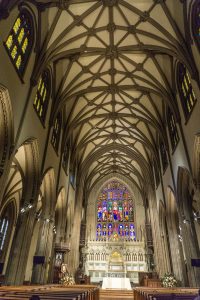 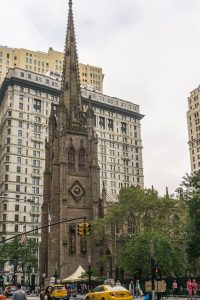 Trinity Church from across the street 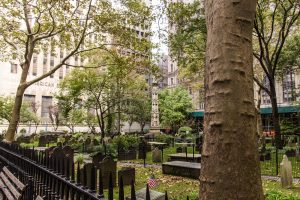 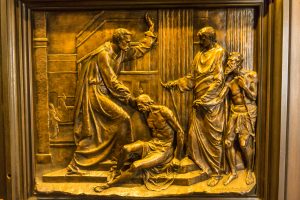 The Statue of Liberty Tour

At the end of our tour of Old New York we came to Battery Park – and crowds of people. I had purchased tickets online a few weeks earlier. These tickets granted us access to Liberty Island and the pedestal, but not to the crown. On the same tour, the boat would take us to Ellis Island. We had a scheduled time of 12 noon.

Battery Park shows green on maps, but in reality it is mostly paved. Entering from the east side we had to run a gauntlet of pitchmen (and pitchwomen) who were trying to sell something to the crowds in front of the Staten Island Ferry terminal. Then we picked our way through some restaurants and play areas until we saw the eagle sculpture. It is pretty impressive. Just beyond that we saw a huge crowd of people – which turned out to be the line for the Statue of Liberty tour boat.

We had to walk to the back of the line, of course, which stretched out a long way. We showed our tickets as we entered the line – the scheduled time was irrelevant – and slowly inched our way forward. Not to the boat, but to a huge white building in which there was a thorough security check. After you pass that, you get in line for the boat. It took us about an hour to get through the line. They load the boats as fully as possible. I got my square foot, and Karen got hers, and that was about it.

Once the boat left the dock, all that was forgotten as we focused on the views of the Statue and of Manhattan. Everyone was taking pictures, of course, and getting a clear view of anything was nearly impossible with all the people in the way! But the views were glorious, and it was a beautiful day as most of the fog had burned off. 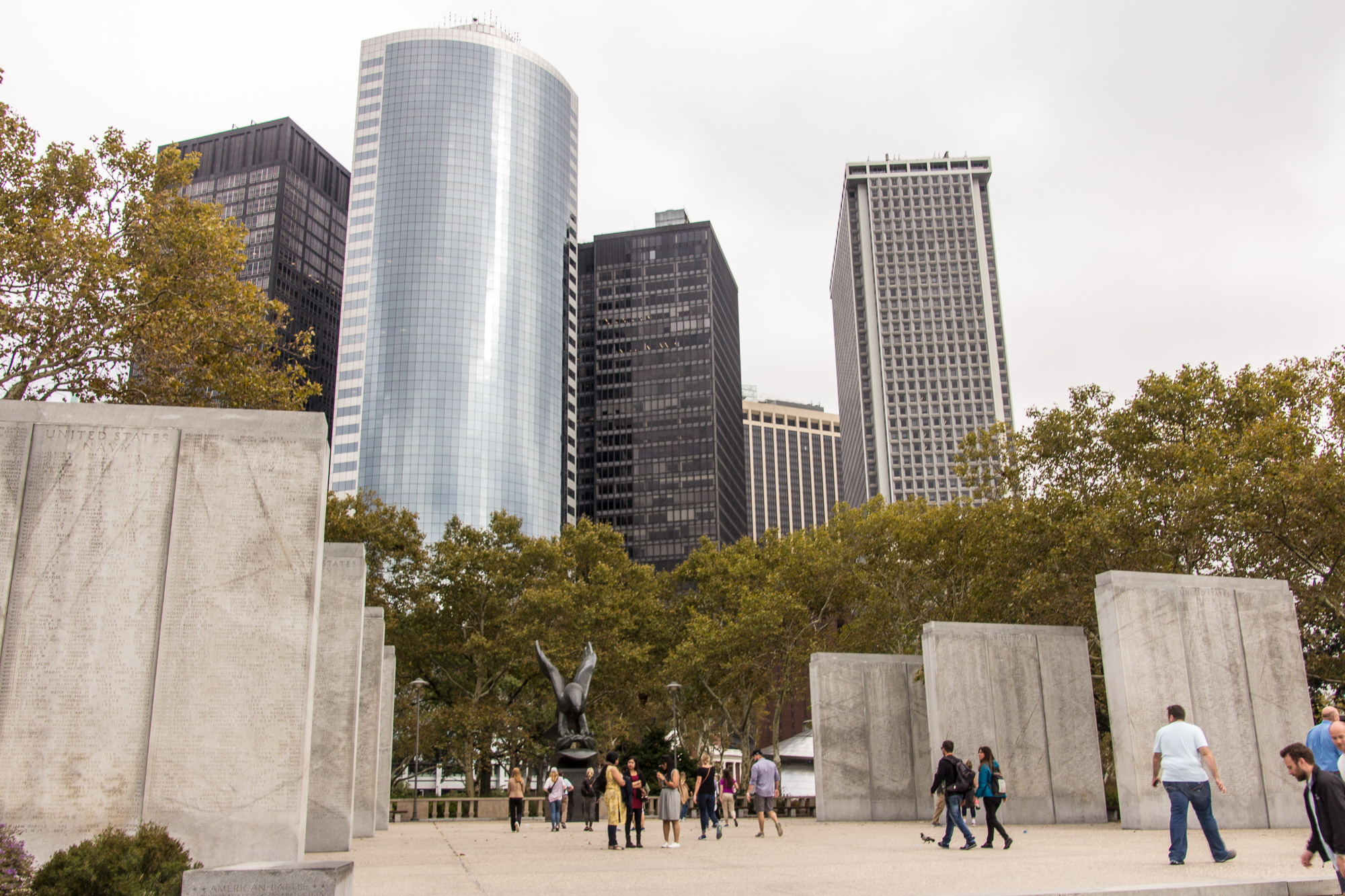 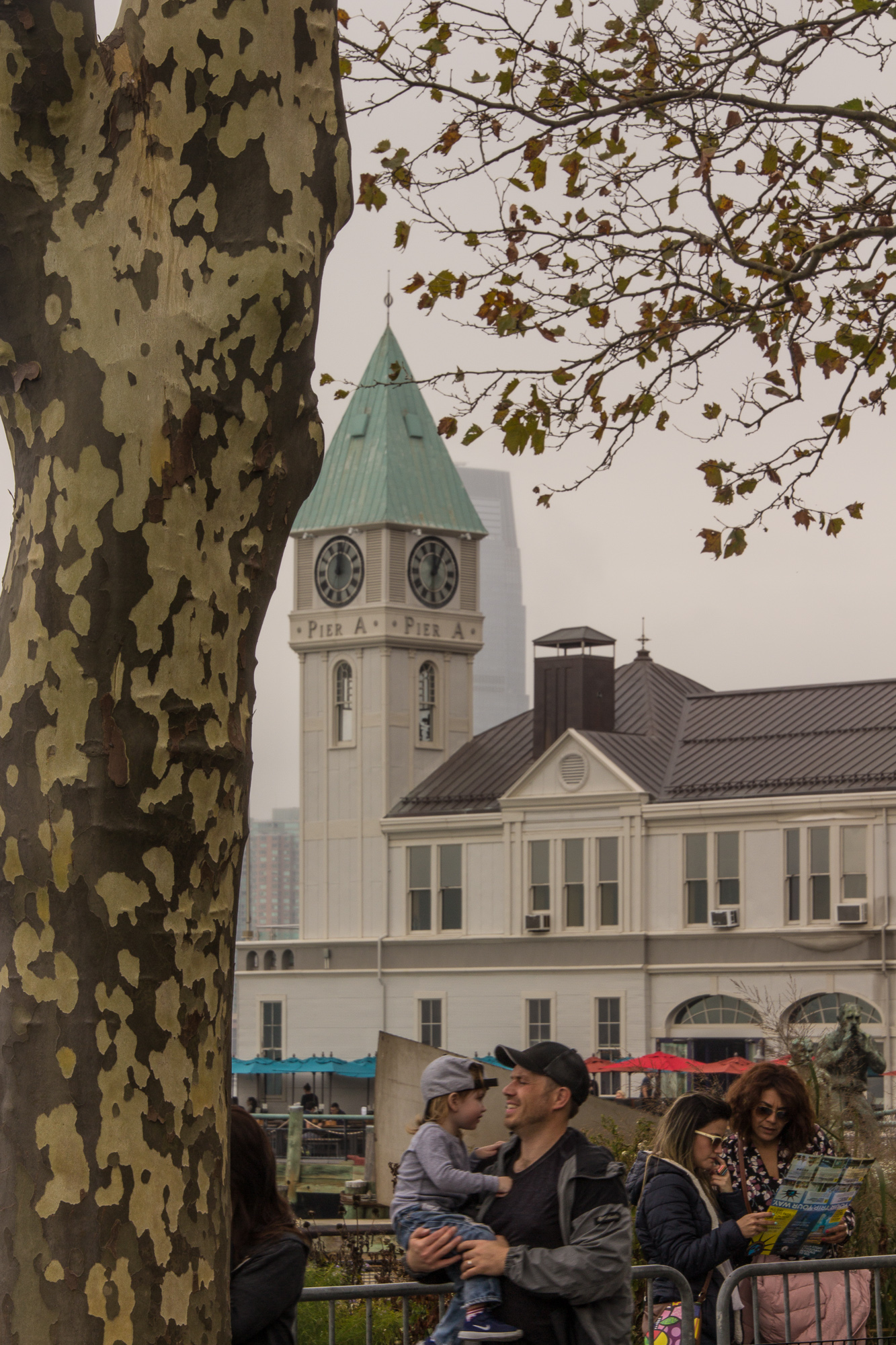 People waiting in line in Battery Park would pass the time doing different things. Of course there were hustlers taking advantage of the captive audience. We found this all over New York City – whenever there was a crowd (and there are lots of crowds) there were people working, trying to extract money from them.

crowds on the tour boat

that cruise ship is bigger than most of Manhattan

Ellis Island in the foreground

The view down from the pedestal

tourists taking in the view from the top of the pedestal 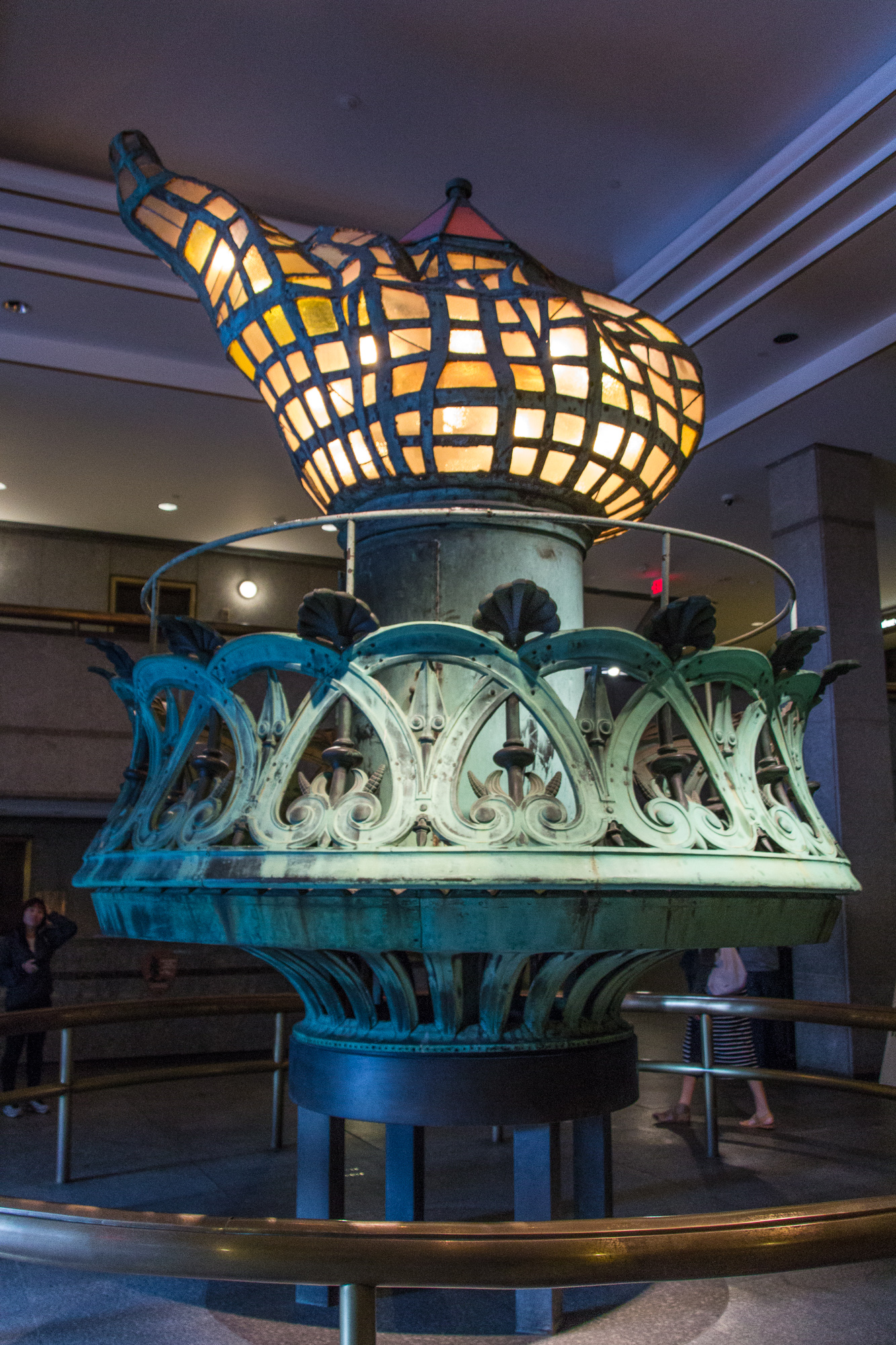 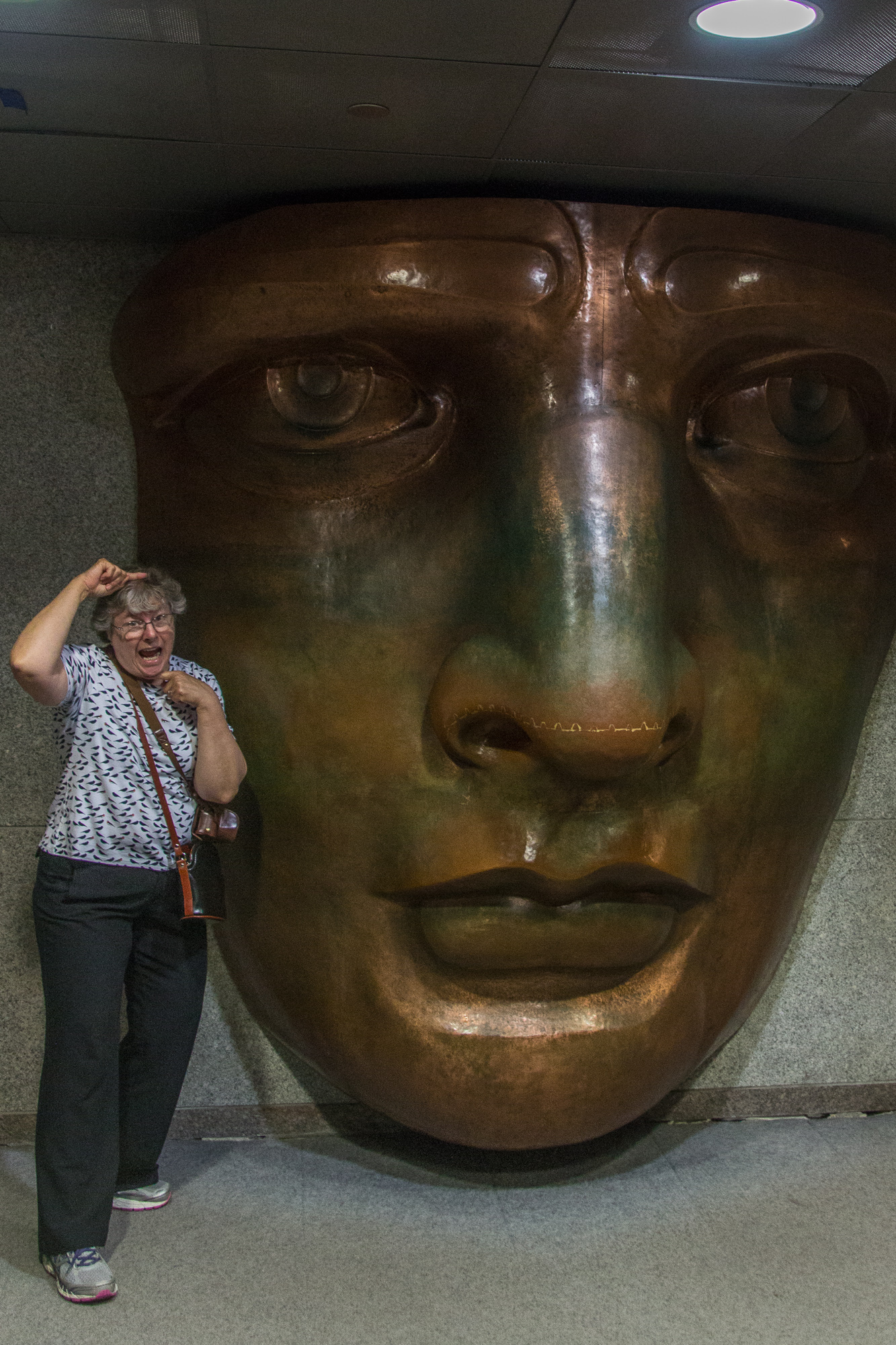 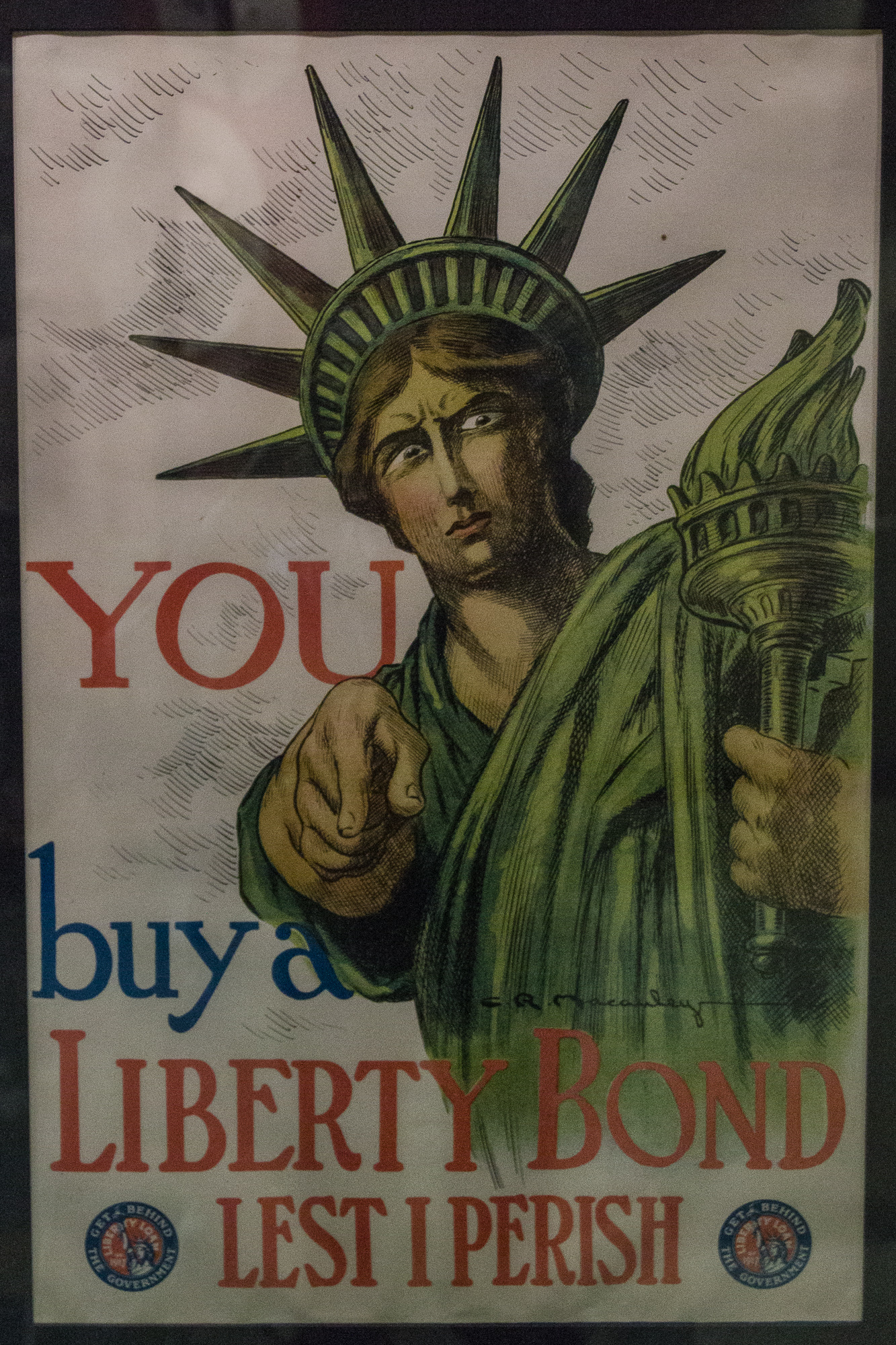 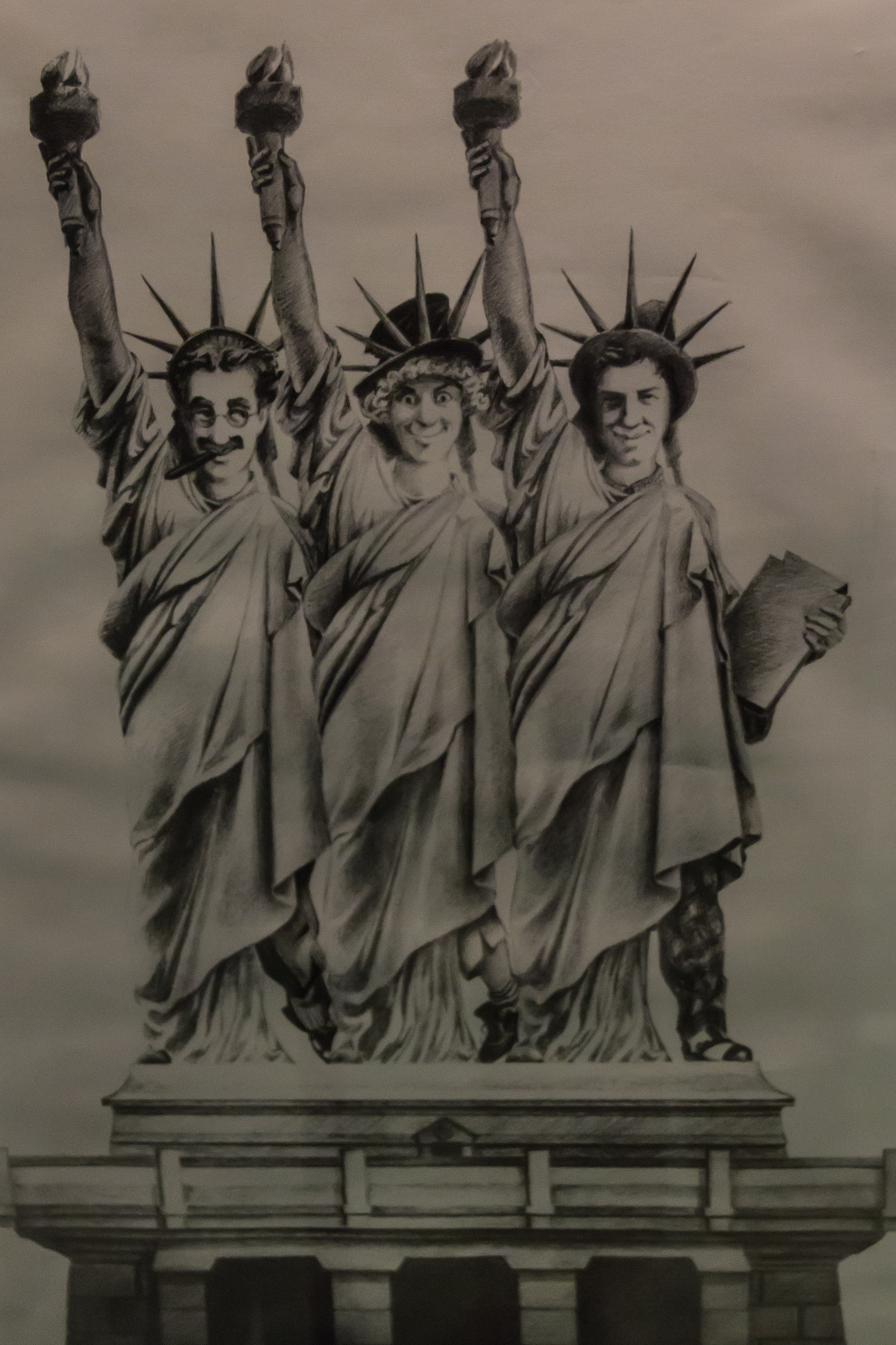 Inside the pedestal there is a small museum with several interesting exhibits. The lower floor contains this torch which was replaced a long time ago because it gave off insufficient light. Up on the next floor they have drawings, parts of the statue, and lots of old photos of the statue.

Part of the museum is an exhibit of posters and sheet music printed over the years that have featured the Statue of Liberty. 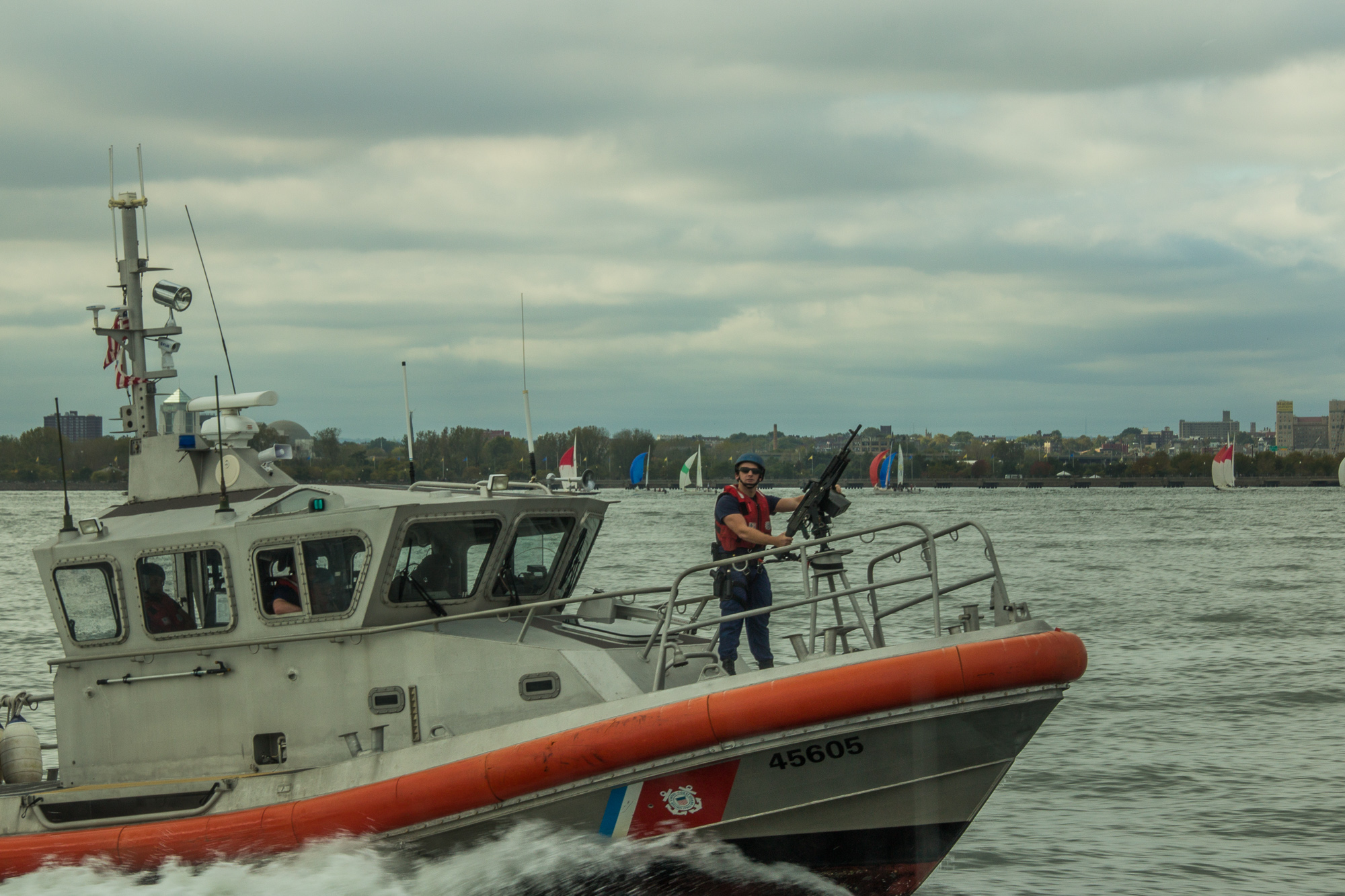 As our cruise ship was returning to Battery Park, this Coast Guard boat came alongside parallel to us for a while. A man with a machine gun was standing in the very front of the boat! I was hoping he wasn’t some maniac who had taken over the vessel! But he waved at us – business as usual, I guess. 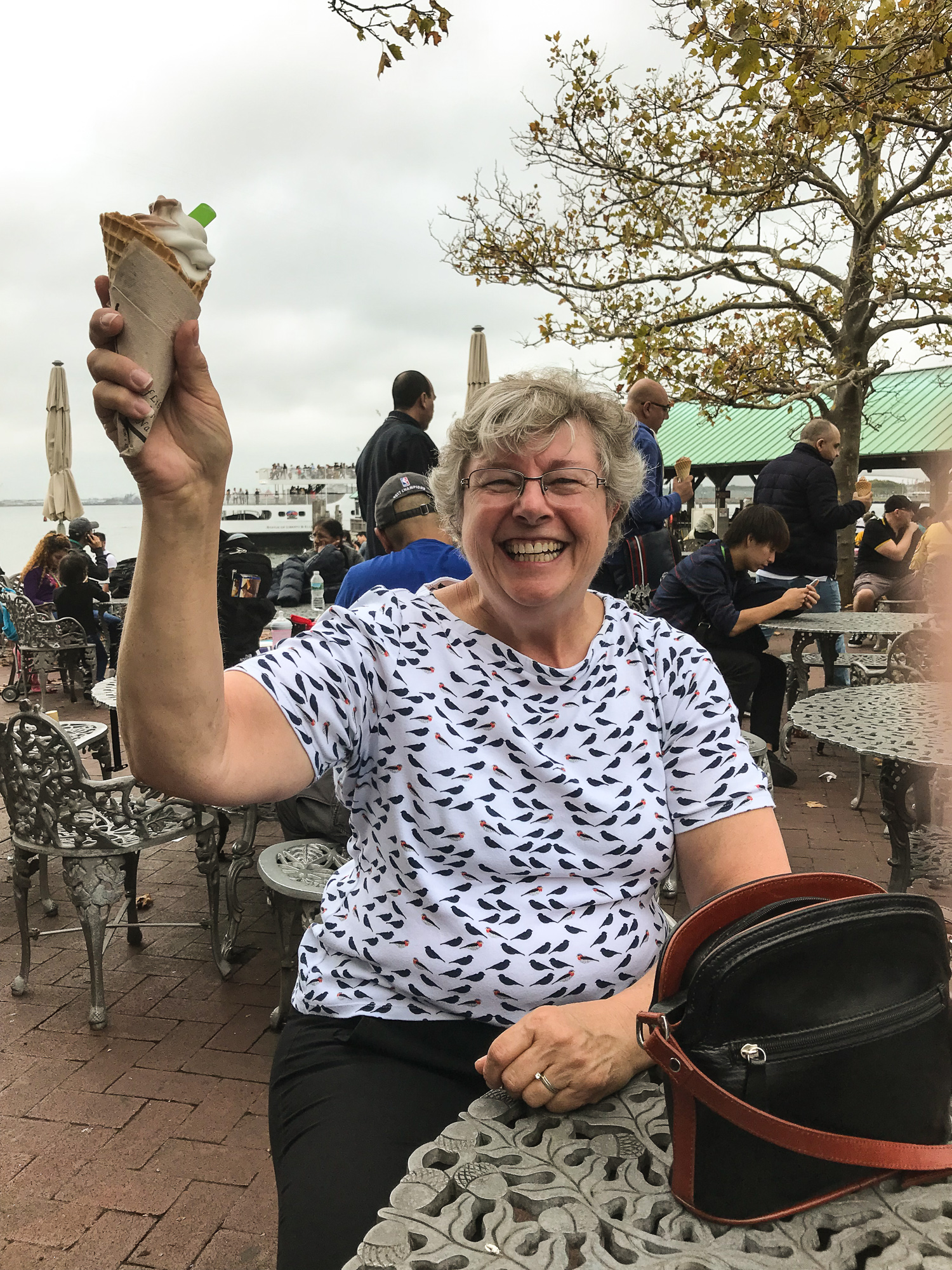 Liberty Island (where the statue is) has lots of souvenir shops and food stands, so we stopped to enjoy an ice cream. In this photo Karen shows us what the statue might have looked like had she been picked as its model. 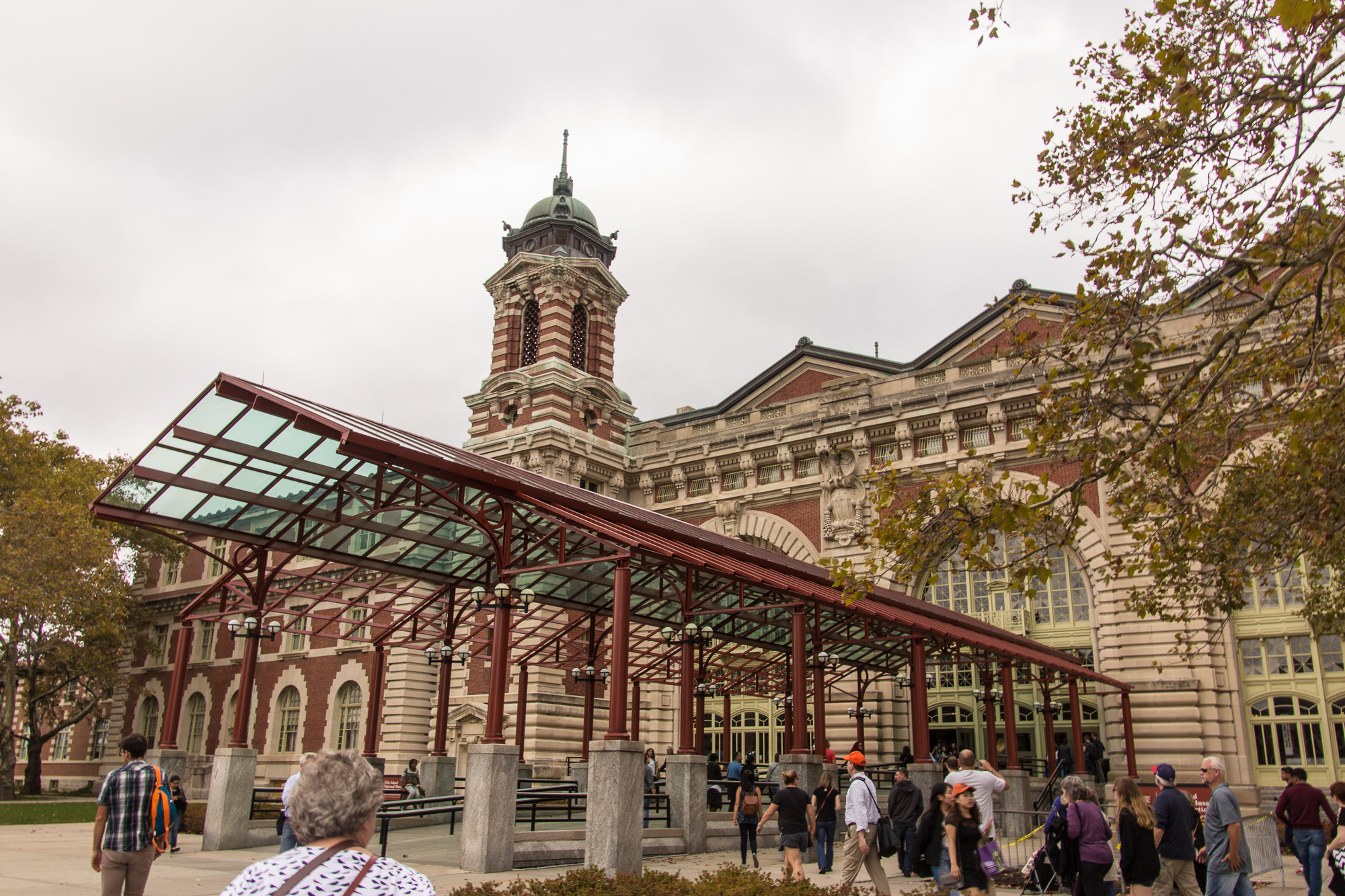 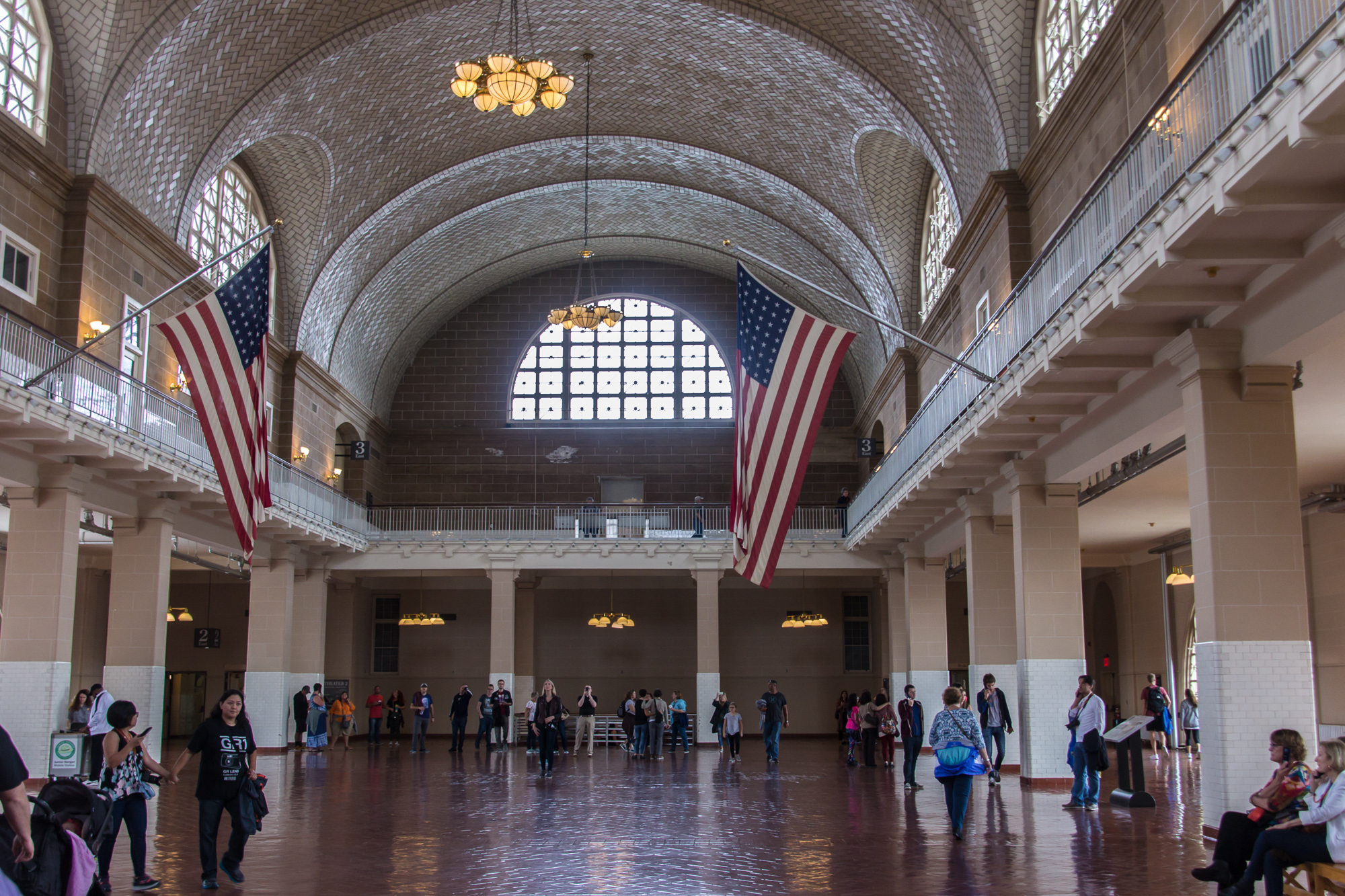 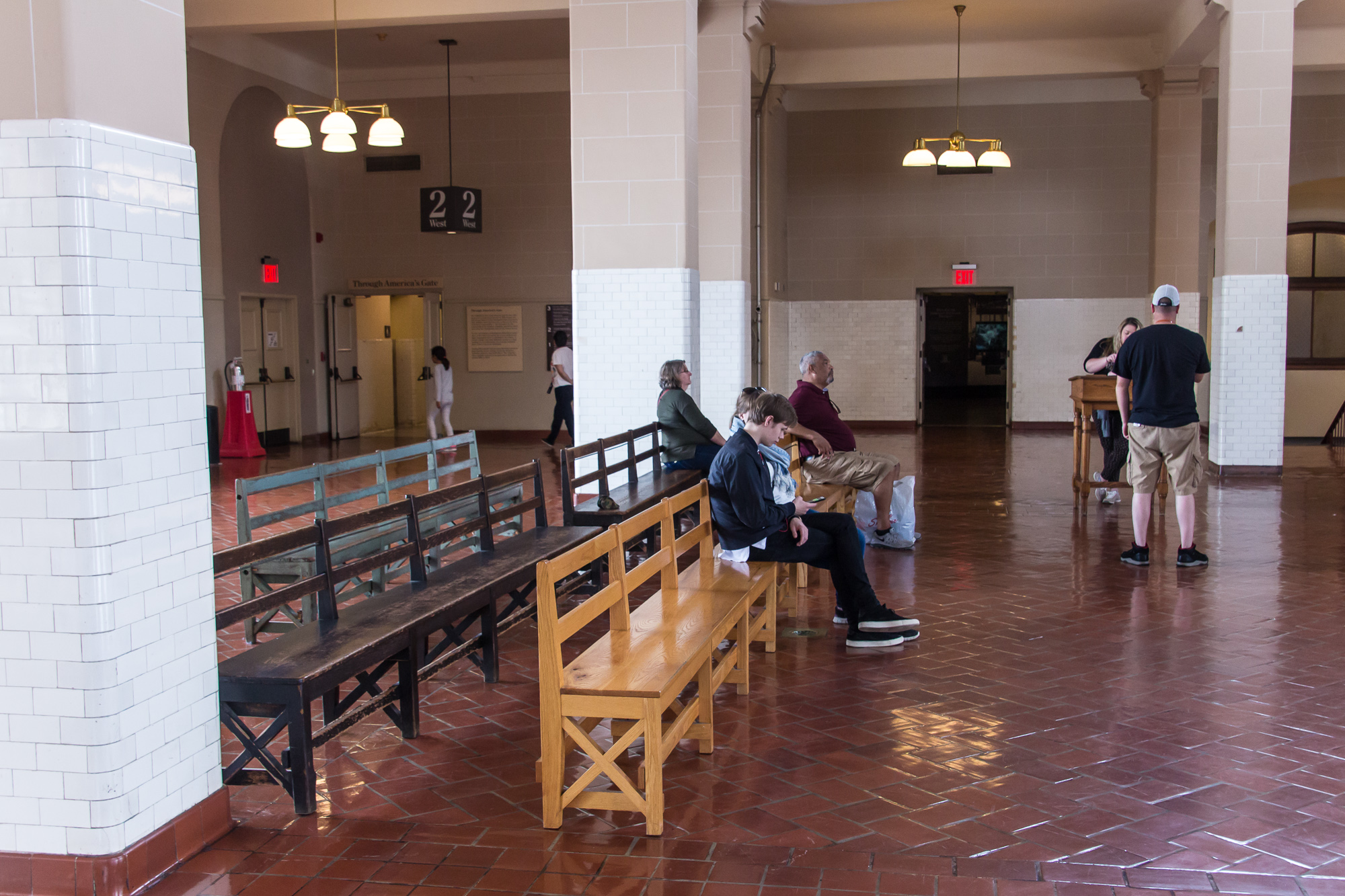 We re-boarded the cruise ship after visiting the Statue of Liberty and it took us to Ellis Island. There we bypassed the museum exhibits and went directly upstairs to the actual room where immigrants were processed. The room does not look like it has been changed much. They have kept some of the original benches where immigrants and

their families had to sit and wait (sometimes for several hours) to be called up to the podium and be interviewed. The podiums were there too, with copies of some of the original documents that were used to record information about the incoming people. I tried to imagine what it might have been like to walk into this room after several weeks in the hold of a ship and wait for hours, hoping that I’d be allowed into the U.S.A. after getting so close.

Back: Rockefeller Center, Grand Central, and the Met
Next: John's Pizzeria, Central Park, and Going Home