Harlem, the Subway, and the Brooklyn Bridge 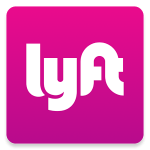 We arrived at Penn Station, downtown New York, at about 3 pm on Thursday afternoon. Since our guest house reservation was about 90 blocks north in Harlem, I thought it might be a good idea to use Lyft to get a ride for us and our suitcases.

We emerged onto the corner of 31st Street (4 lanes) and 8th Avenue (5 lanes), jammed with cars, trucks, and buses (see photo, right). I put my information into the Lyft app, punched the button and prepared to wait.

It took about two seconds! Immediately my phone beeped and said “Your Lyft is here!” It said to look for a black Camry. I looked around and saw at least a dozen cars that might qualify. My phone rang and I answered it. “Hi, I’m your Lyft driver!” said a voice. “How do I find you?” I asked.

“Turn to your right about 45 degrees – do you see me waving at you?” “Yes!” We rushed over with our suitcases – he was double-parked, of course – and got them into the trunk of his car as quickly as possible. We got in, buckled up and we set off for Harlem. GPS is a wonderful thing.

The ride up to Harlem rated an E-ticket, for sure. You have to be really aggressive to drive in New York. You have to seize any space that gets you ahead – no matter how small it is or how quickly it is filling up. Our driver was really impressive! He seemed to know exactly when to make his move, and to be able to sense what the other cars were going to do. Me? I just enjoyed the ride. And was really glad that I was not going to have to drive in New York.

You may have heard that it’s pretty expensive to get a room in Manhattan. A few weeks before our trip, we searched the Internet, looking in some of the surrounding New York boroughs, but couldn’t find anything that matched up with our budget and our taste. Then I clicked on a place called “Efuru Guest House” in Harlem, and it looked pretty good. We checked out the neighborhood using Google Street View and we were positively impressed. We were both attracted by the beautiful brownstones (row houses).

We decided that a stay in Harlem would qualify as an adventure – an experience that is not entirely predictable. It might be fun! It would certainly be interesting.

As one might expect, we were part of the minority race in Harlem. Our guest house was half a block off of Malcolm X Boulevard – a huge street with lots of interesting places on it. We found an excellent breakfast spot on our first morning, thanks to the recommendation of our hostess. There were lots of churches in the neighborhood. This was good – we hoped to visit one on Sunday morning. (More about that on this page.)

Our guest house was in an attractive brownstone with a bright red door – but they didn’t want us to use it! To enter and exit, we had to go through the gate to the right of the steps, then step down to the lower level and use the basement doors. There were three of them, one after the other, each with its own 4-digit code that worked the lock. Then we had to leave our shoes in the basement, and walk up to the 3rd floor in our socks. Our room faced the street, and had one window that opened to the street. I don’t think it ever went below 70 even at night – so it was pretty warm in our room. 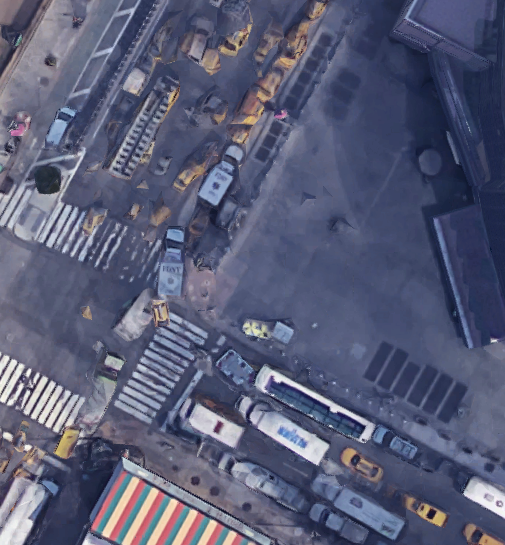 This Google satellite image of the corner of 8th Ave. and 31st St. gives you an idea of how busy the streets are. 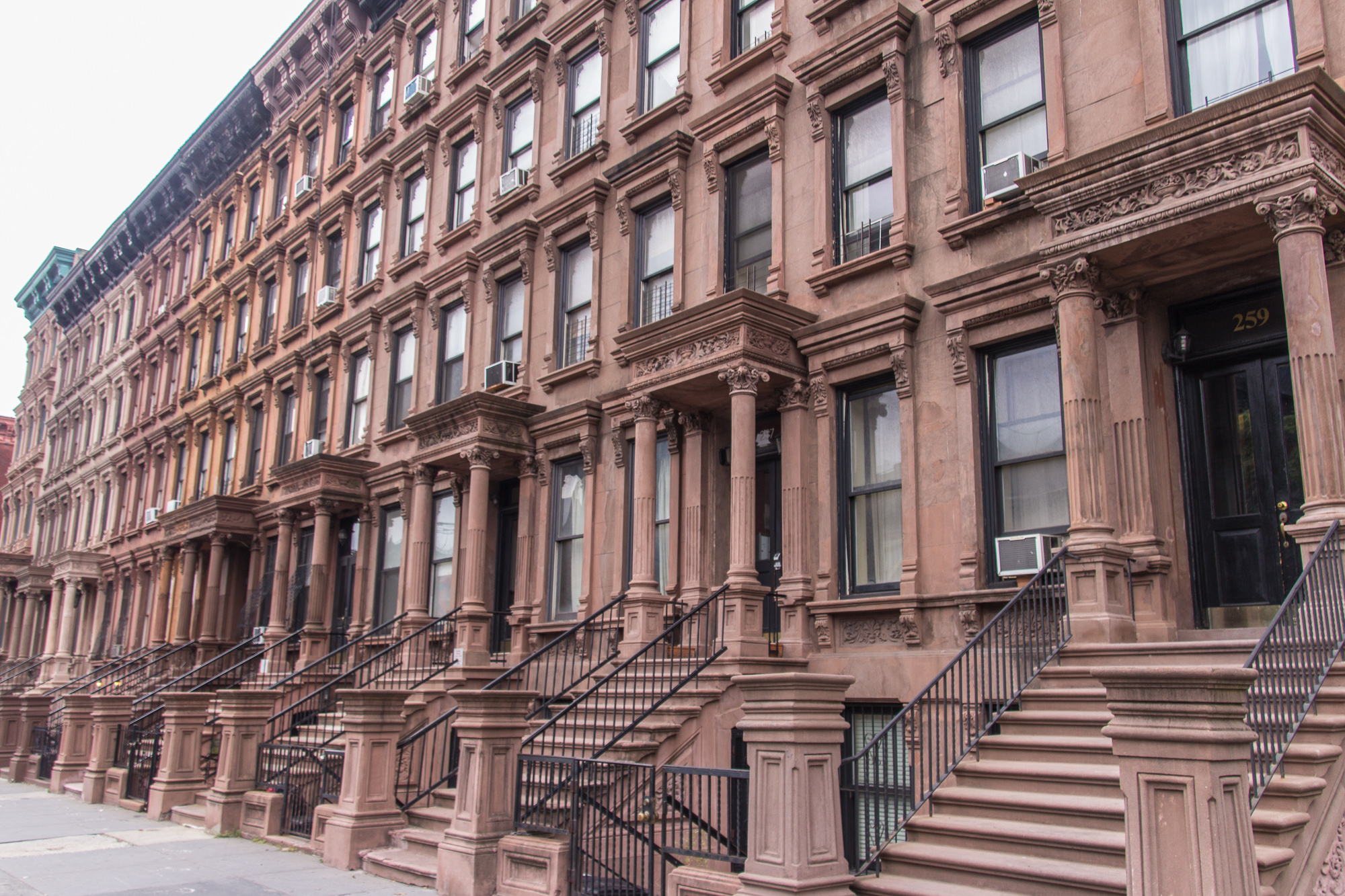 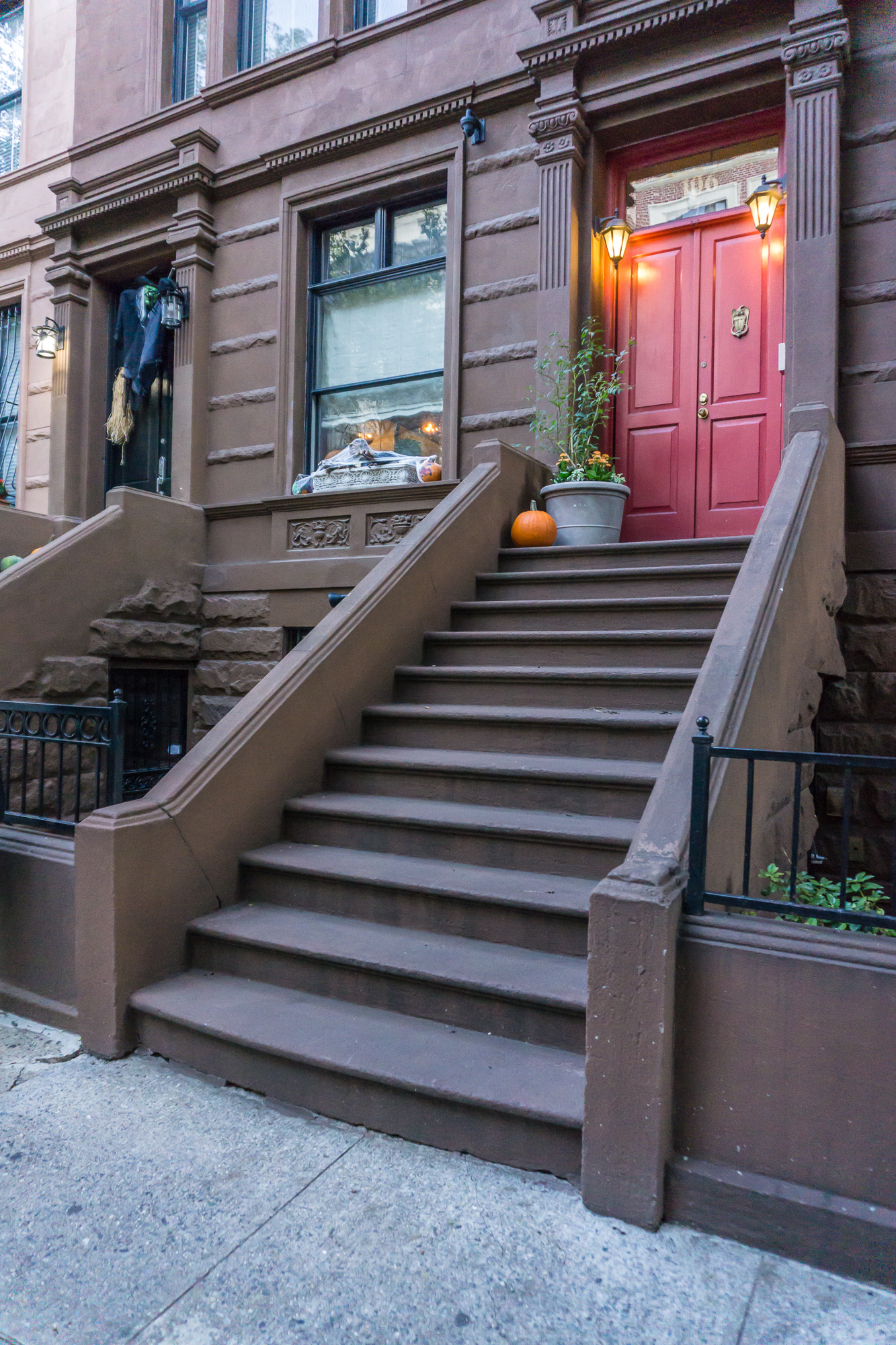 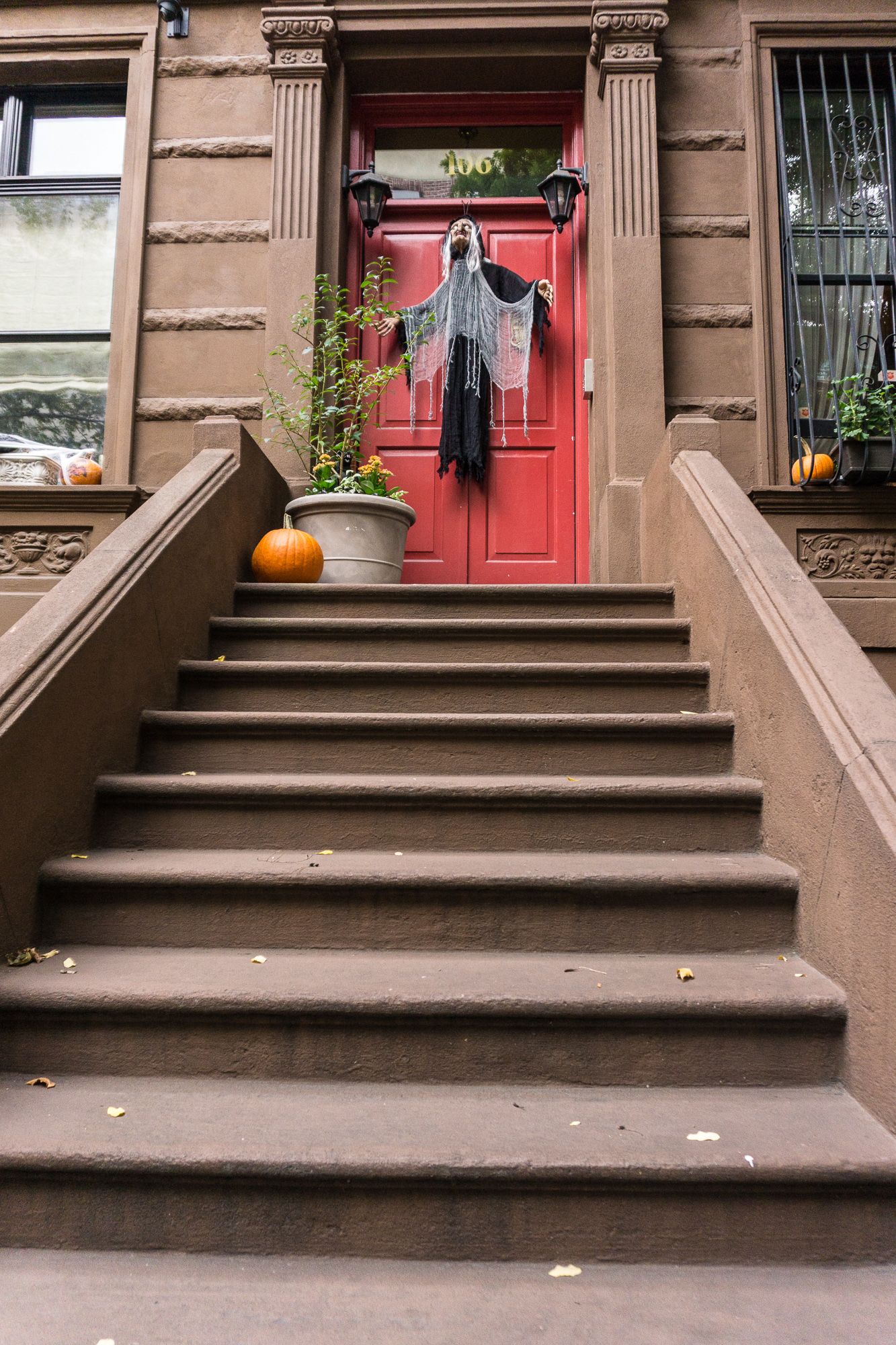 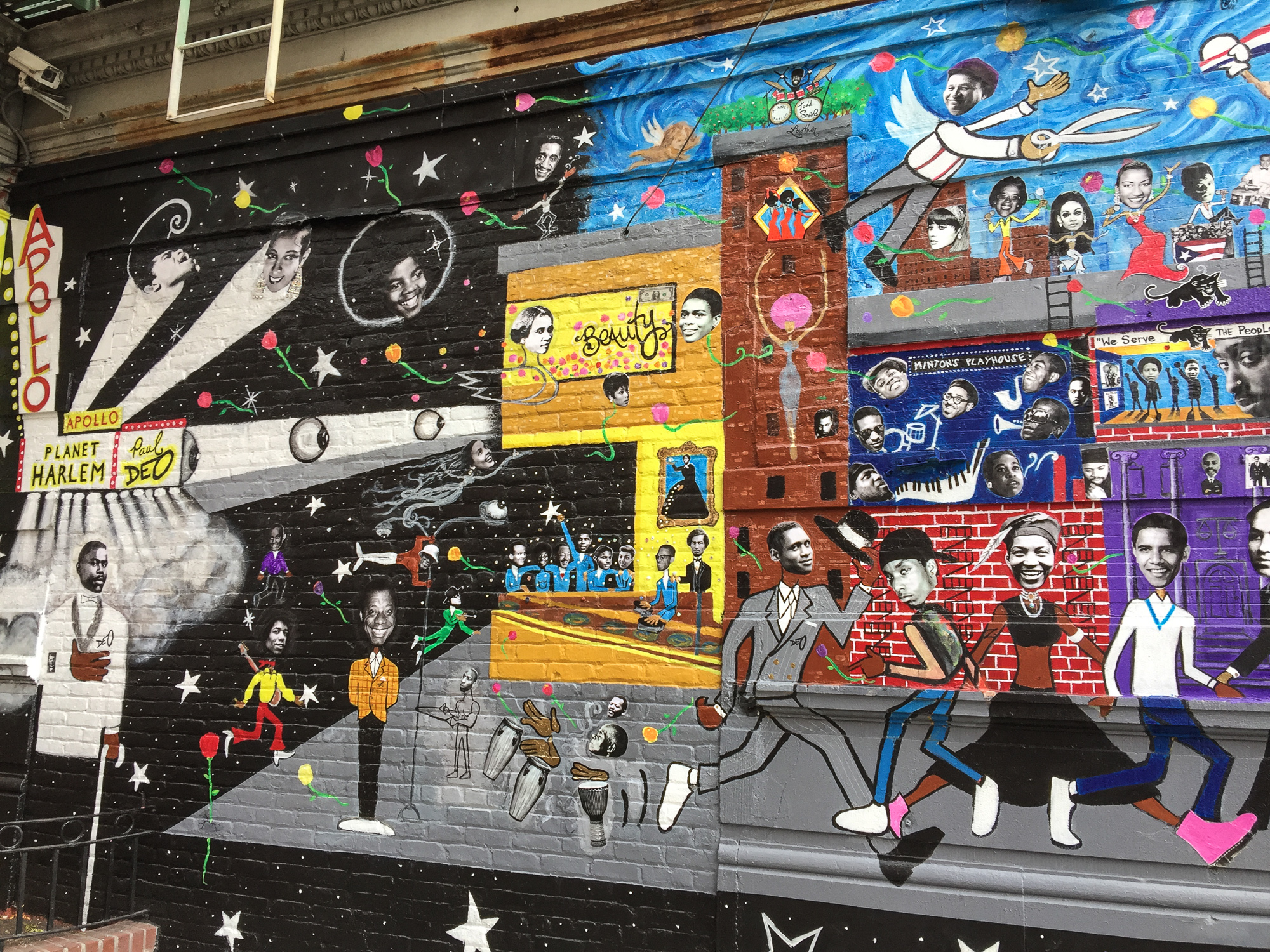 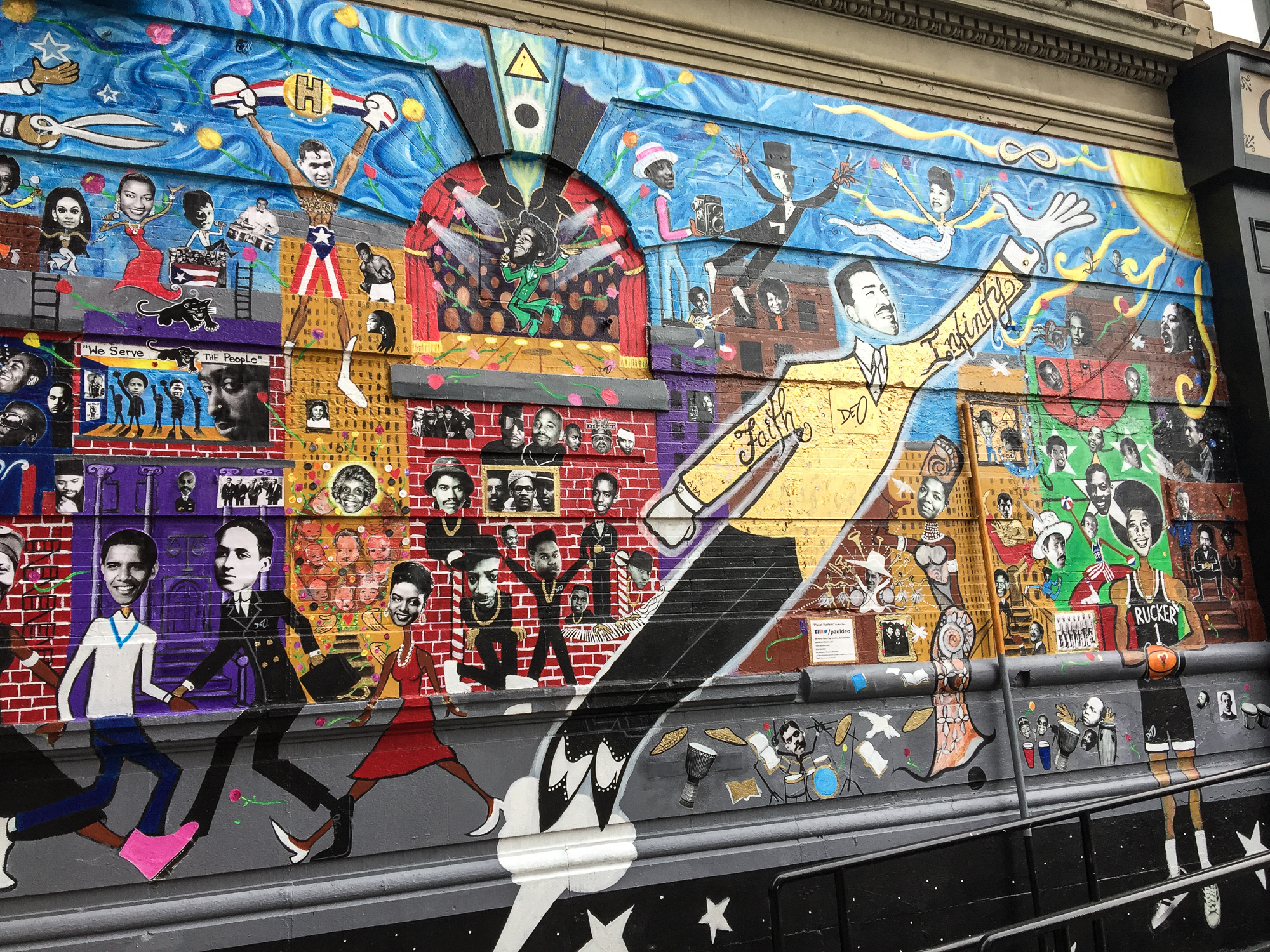 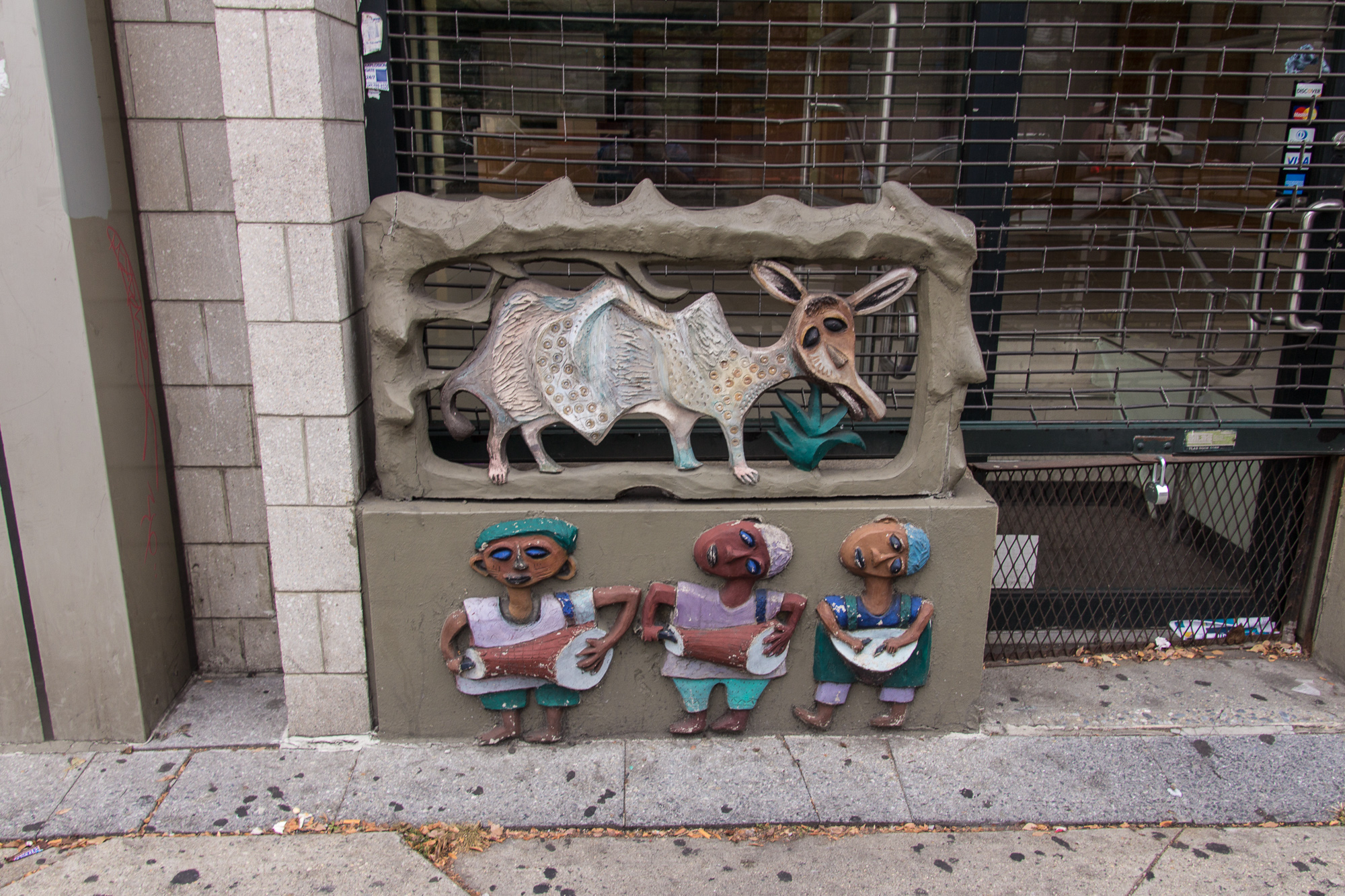 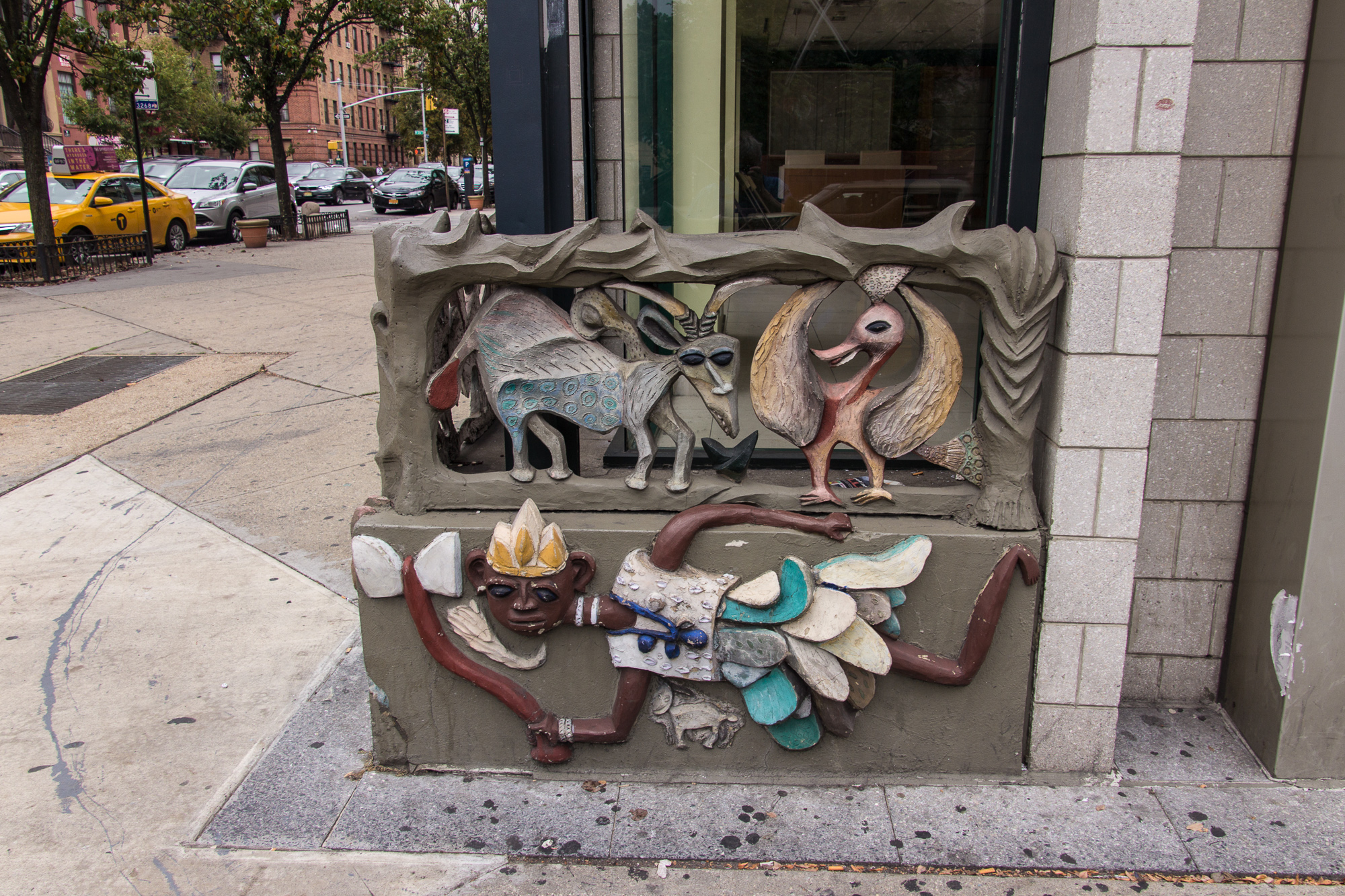 We found this mural painted on the side of an old building on the corner of a major street in Harlem. Click on the photo to see detail; the artist has used a lot of photos of famous people

This artwork was just sitting out by the sidewalk; I couldn’t tell if it was for sale or on display as works of art. 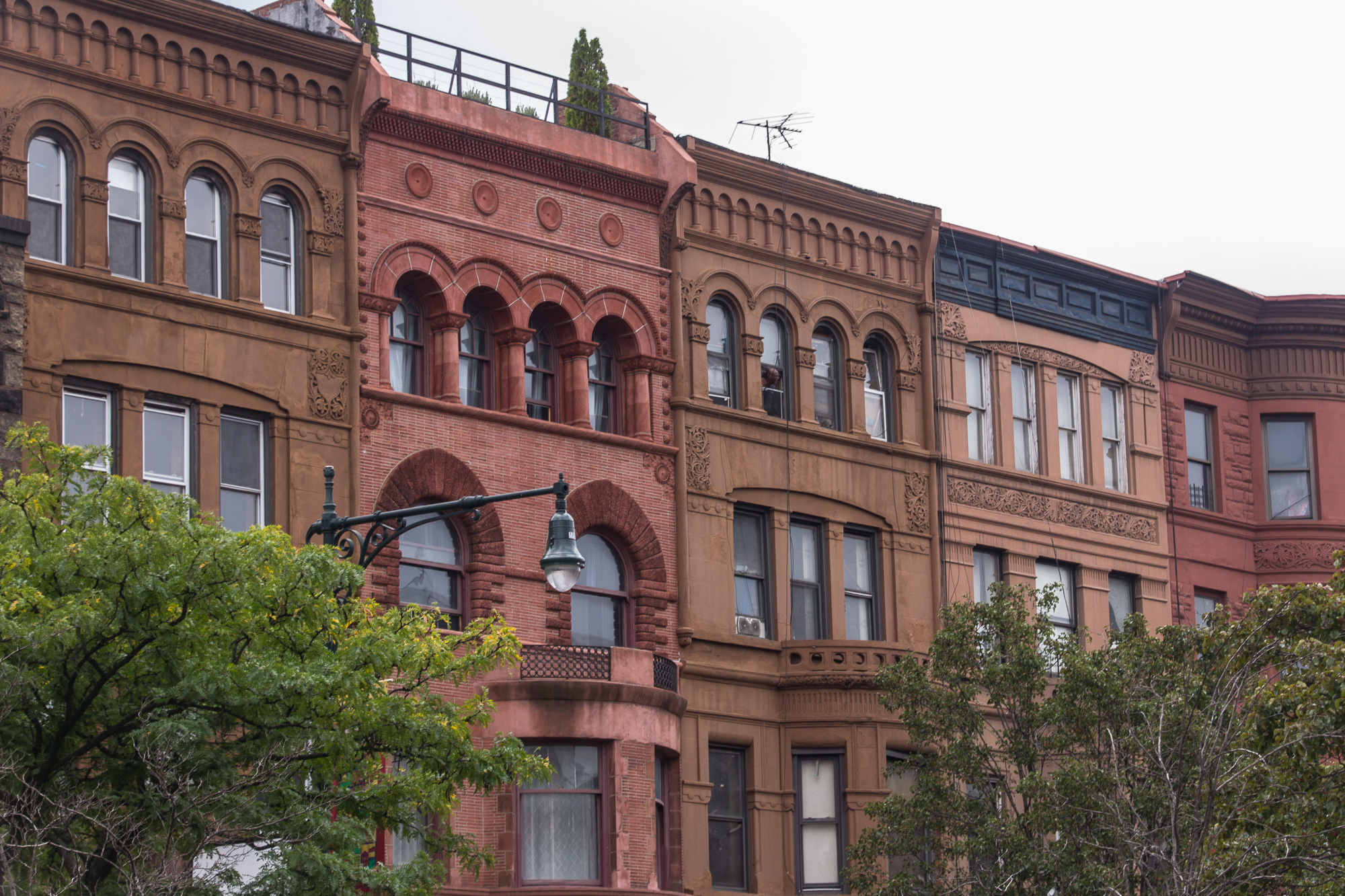 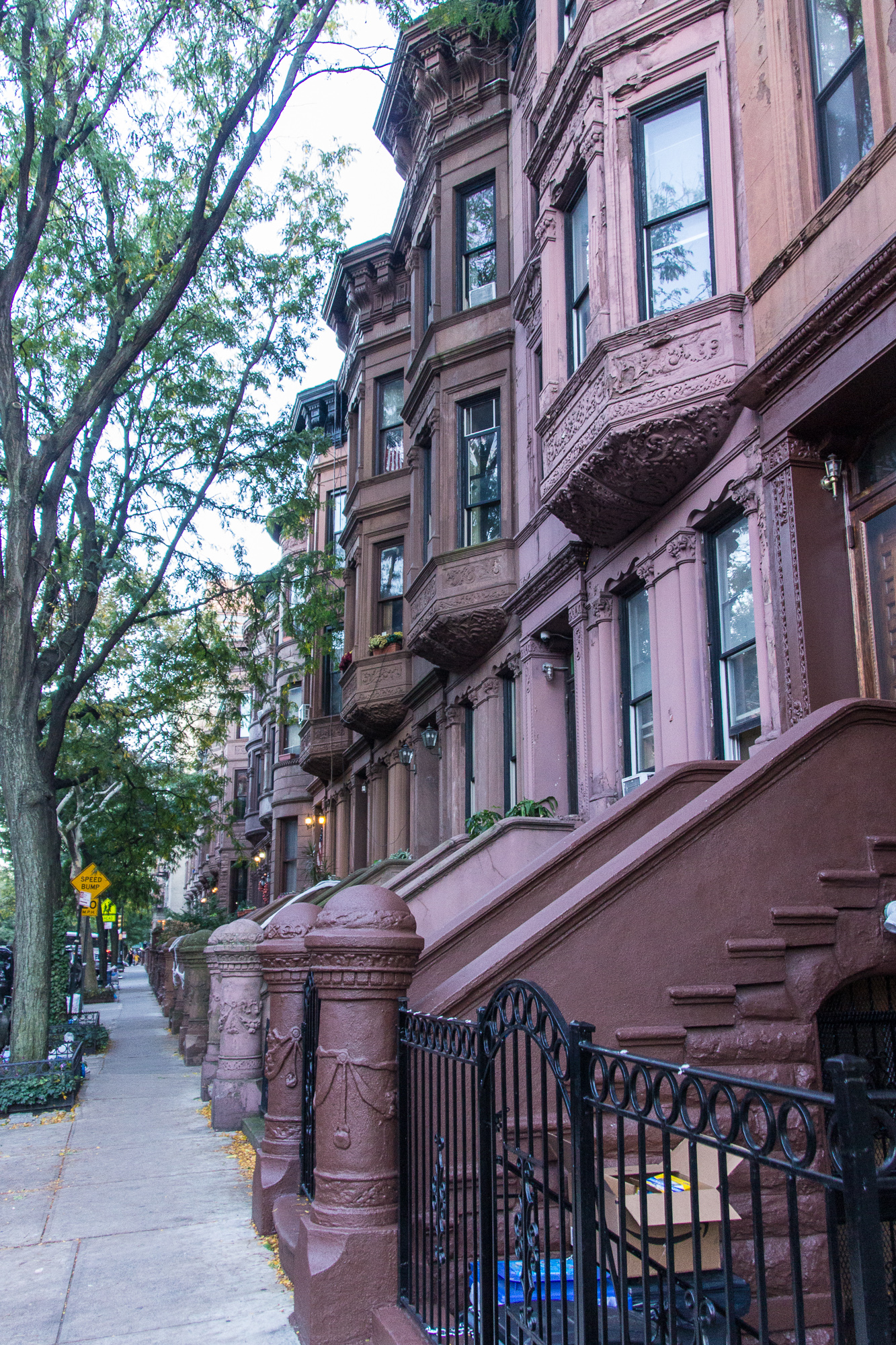 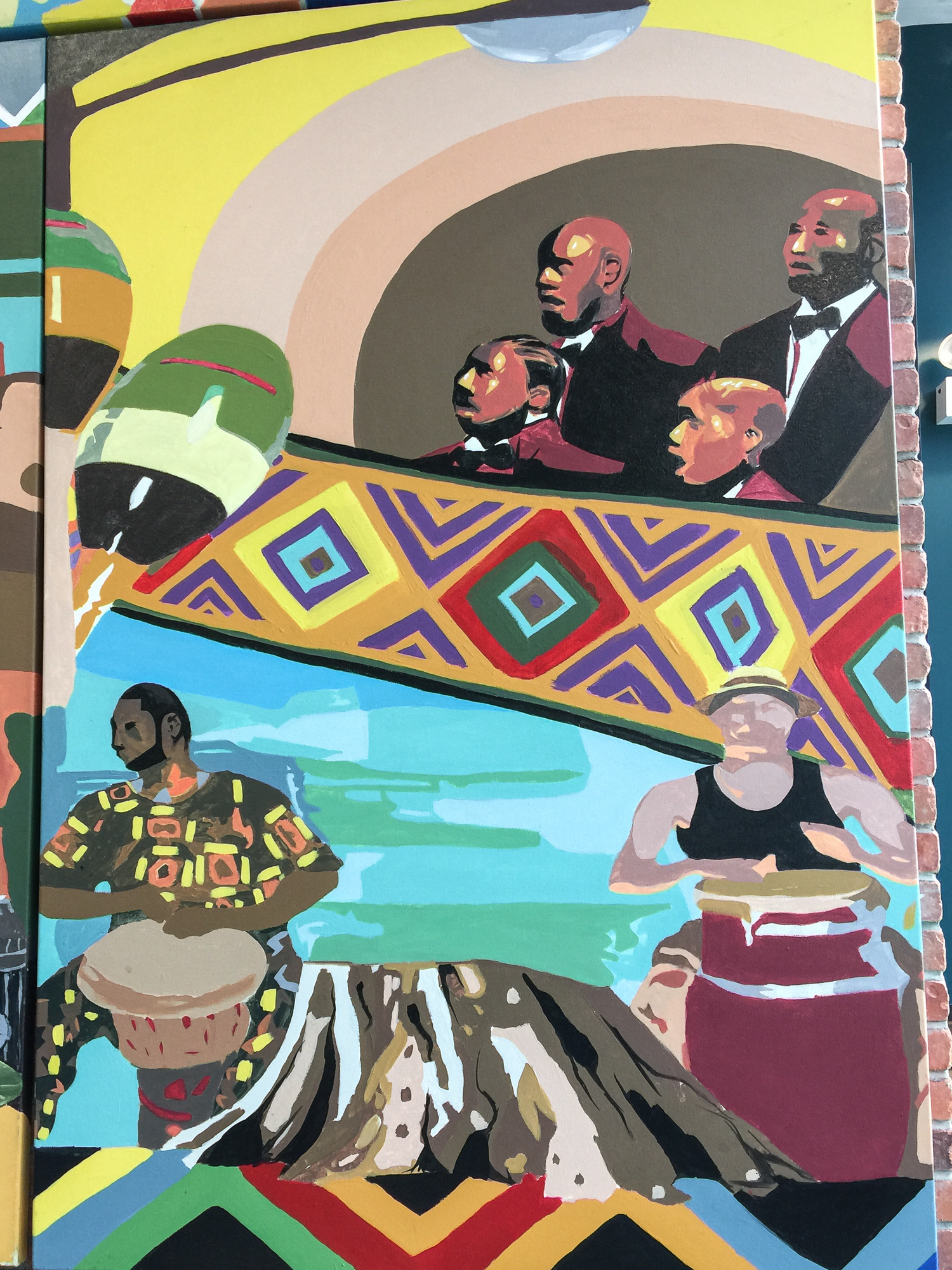 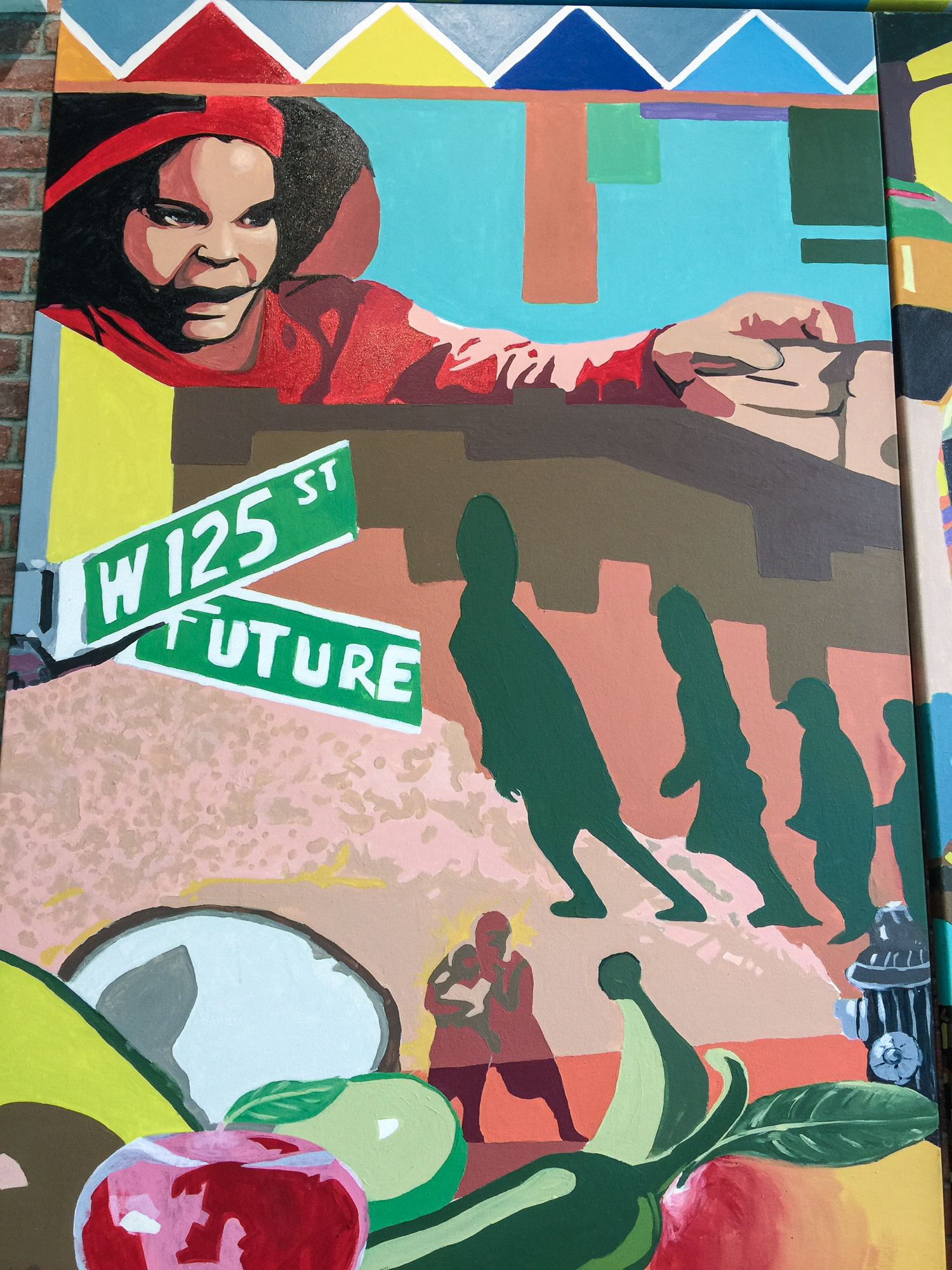 These brownstones were on a major boulevard in Harlem. They were set well back of the street and they had concrete “front yards” with trees. Some of them housed churches or non-profit organizations.

It’s worth a click on this image to see a larger version. The detailed decorations are impressive!

This row of brownstones was on the street where we stayed, just one block down. I love the decorated pillars and bowed windows.

A few blocks up Malcolm X boulevard we were surprised to find a Whole Foods market. (We saw no other chain stores or restaurants anywhere else in Harlem!) Inside, in the dining area, were these posters depicting life and music in Harlem.

On the evening of our arrival in New York City we took the subway down to the Brooklyn Bridge and walked across it – to Brooklyn! It was a lot of fun, and we had wonderful views of the nighttime city skyline. 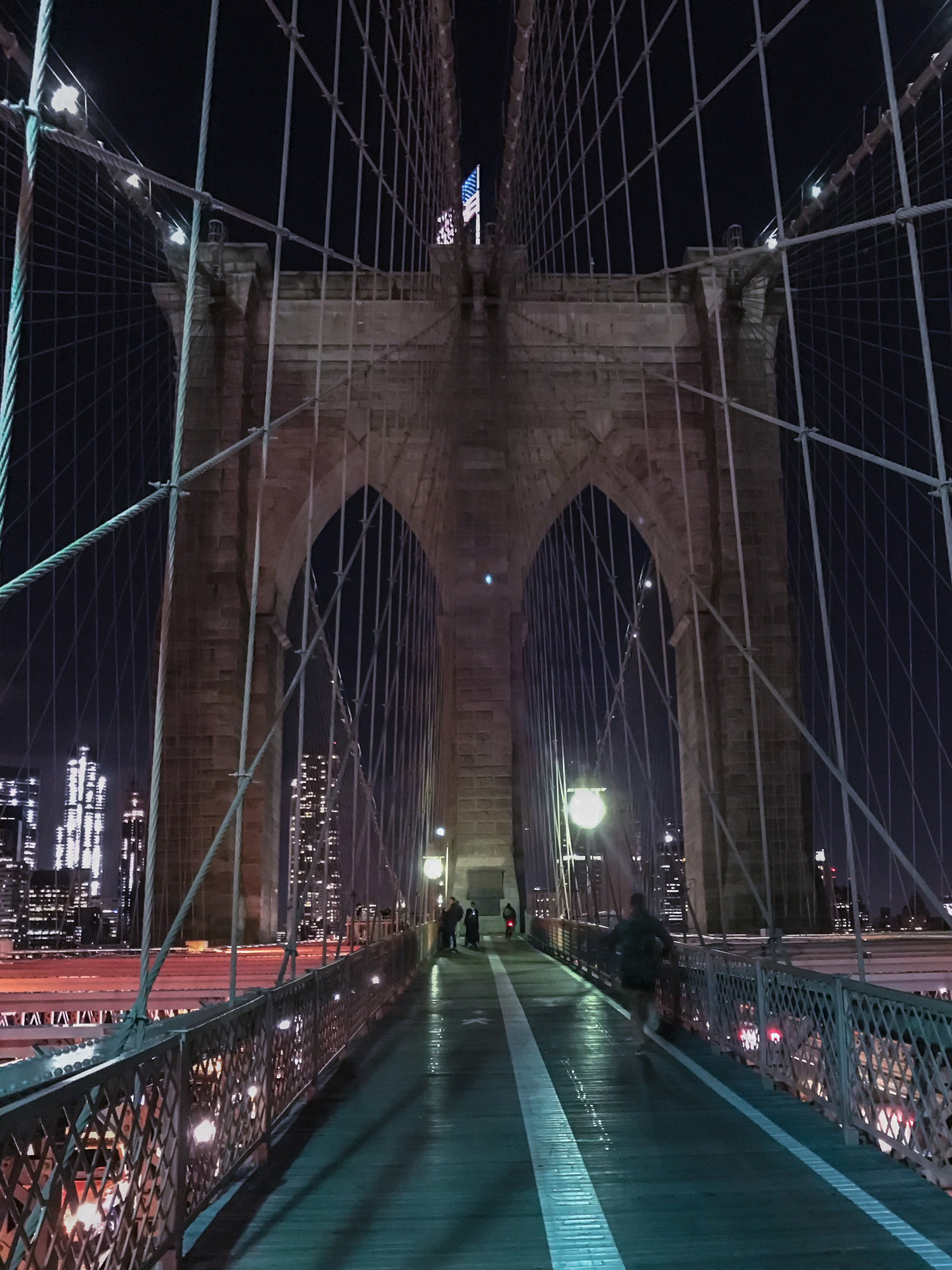 One of the two huge towers that hold this bridge up. The Brooklyn Bridge was the first-ever steel-wire suspension bridge constructed.

Shown here is the pathway for walkers (on the left) and bike riders (on the right). More than 4,000 pedestrians and 3,100 cyclists cross the Brooklyn Bridge each day. The vehicles are on a lower level to either side of the pathway. 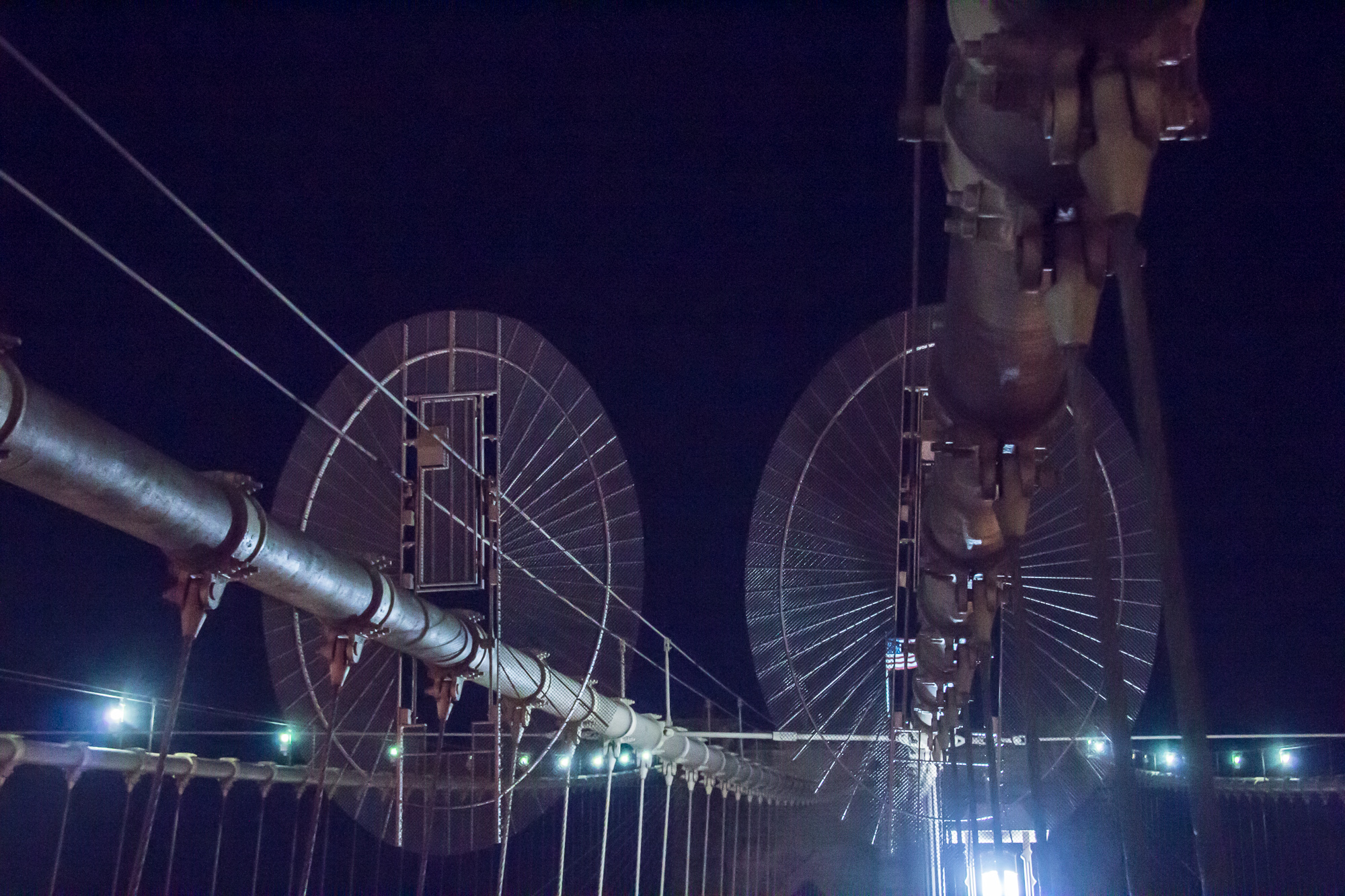 These are the steel cables that hold the bridge up between towers. I assume that the oval shields are there to keep people from climbing up the cables!

I was a little nervous about riding the subway in New York. We’ve used subways in lots of major cities in Europe and in the U.S. But I’d heard some scary stories about New York subways. And now I believe them! Nothing terrible happened, but in summary I would say that the experience of riding a New York subway makes you thankful when you’re back up on the street again.

You enter the subway system by descending a staircase right down from the sidewalk. When you get down there, you have three options: you can buy a ticket from a machine, talk to the attendant in the booth, or go through the turnstiles directly to the track. There’s only one track. There are no walkways and no choices. You made your choice up on the sidewalk. 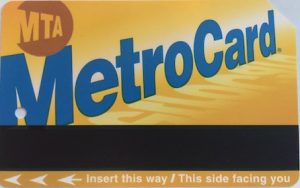 We’d been advised to buy a one-week pass. So on our first visit (the evening we arrived) we each got a Metrocard for $33. And then we went through the turnstile. Or at least I did. I went through and stood by the track and suddenly realized that Karen was not there. I looked back and she was still on the other side. The turnstile wouldn’t let her through. She was getting an error message but couldn’t understand it. Finally we figured it out – she was running the card too fast through the card reader.

When she made it through, I realized that we had only one track to choose from. This was the only train we could take. And it was headed uptown. We wanted downtown. “No problem,” I said to Karen. “We just went down the wrong staircase. We’ll go back up, cross the street, and go down the other staircase.” 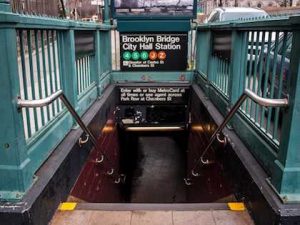 So we exited, went back upstairs, crossed the street, and went down on the other side. I ran my Metrocard through the reader, and it refused me! “Can’t use card for 18 more minutes!” it said. Apparently they punish you for making a mistake here. (Actually, the rule is to prevent multiple people from using the same card.) So we learned our lesson: read the sign before you go downstairs. We went to the attendant to plead our case, and he pushed a button that let us in.

New York’s subway system is one of the largest and most complex in the world. One thing that makes it difficult is that the trains are identified by a single letter or number – unlike every other subway in the world that uses meaningful names for their trains. On the other hand, now I know what the song “Take the A Train” is all about. That’s how you get to JFK airport! 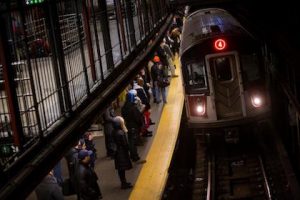 Some cars have electronic signs in them to tell you the next stop. In others, you have to depend on a verbal announcement. This is somewhat of a challenge because the cars are noisy and the sound system is poor. But you can count on one thing: the cars will be crowded. We were jammed up next to people on most of our trips.

Two of the more fun “features” of the subways are the people who walk from car to car while the train is running, asking for donations; and while you’re waiting by the track for the train to arrive, you can watch the rats frolicking down on the tracks. I guess they’ve figured out how to stay off of them when the train arrives!

Back to the Finger Lakes District
Next: Empire State Building & 2 Libraries