Back in 1968, I was a high school sophomore who had an amazing opportunity – I got to spend my summer touring Europe! I joined a tour of 50 students from Whittier Union High School District for seven weeks to Germany, Austria, Switzerland, and Czechoslovakia (as it was then known).

We stayed in youth hostels (cheap) and with families who had volunteered to keep us (free). We travelled by train from city to city, taking in the sights. It was a life-changing experience, opening my eyes to a world far removed from the one I was growing up in. I always knew that I wanted to go back.

When Karen and I decided to celebrate our 25th wedding anniversary in 1998 with a trip to Europe, my plan was to show her the sights I’d seen as a 15-year-old. We went to back to cities I’d seen: Cologne, Oberammergau, Nuremburg, Munich, Salzburg, and Vienna. We sailed down the Rhine and I showed her my favorite castles. We visited Neuschwanstein, Linderhof, and the Wieskirche.

But we didn’t get to Prague on that trip, or to Switzerland. We did get a chance to go to Prague later on, in 2006, but I’ve never had a chance to show the Swiss Alps, or the city of Lucerne, to Karen. We’re going to take care of that on this trip.

My only memory of Lucerne from 1968 is this covered bridge. I remember that all 50 of us kids had to walk across it. It was an old (17th century) wooden bridge, famous because of the paintings that were hung in the eaves every few feet as you walked along. The paintings depicted the history of the town. I took this picture with my Instamatic camera. It’ll be interesting to compare the look of the old bridge with the restored version.

I guess I should be glad I got to walk across it back then, because in 1993 it burned down. A boat got stuck underneath it and caught fire. They’ve rebuilt the bridge, and repainted the paintings, I guess. It will be fun to see!

Where are we going?

On the town in Lucerne, Day Two 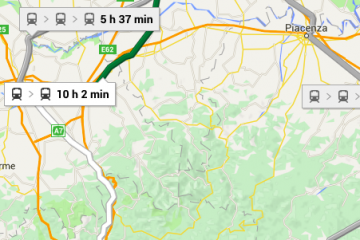