To get to the Schilthorn from Lauterbrunnen, you walk down (the whole length of town!) to the railroad station, and there you show your Swiss Travel Pass (worth its weight in gold – literally) and they wave you through to the next available gondola car. That one whisks you vertically – yes, almost straight up – to Grütschalp. Arriving in Grütschalp, you walk 10 feet to a waiting train car that clacks you horizontally (south) to Mürren.

Mürren is a cute little village chock-full of shops and restaurants. We spotted a sporting goods store with a rack of walking sticks out front. Both Karen and Doree had been talking about getting one, so we stopped and checked them out while the others went on. Did you know that they make walking sticks out of titanium? They do, and we are now the proud owners of a pair of them. They are fantastic. Doree has named hers “Henry”.

From the other end of Mürren (yes, you have to walk through the whole town) you catch another gondola up the mountain to Schilthorn. As we looked up to see where the gondola was going, we saw… nothing. Just white fog. Trusting that there was an actual destination (Joyce said “We know where we’re going anyway”) we climbed aboard.

Actually there are two destinations. The first is called Birg. There they have a large observation deck called the Skywalk Terrace – that’s where we took a lot of pictures – and a nice coffee shop. Joyce likes mochas, so she has undertaken to educate the Swiss baristas about their making. She found a willing student at Birg, and as he brought our drinks he said “This is American mocha?” We assured him it was very popular with all Americans, and we expect it to appear on the menu shortly.

Then we took another gondola over thousands of feet of empty sky to Piz Gloria, the revolving restaurant that served as a set for a famous James Bond movie (“On Her Majesty’s Secret Service”) in the 1960s. There we posed with Bond cutouts and posters, and had a revolving lunch. All very 60s.

Coming down from Schilthorn by another route, we stopped at the little village of Gimmelwald. Gimmelwald is unknown to nearly everyone except for Rick Steves fans and a few cows. It is a farming village and full of cow-related items.

We continued our descent to Stechelberg, a town on the valley floor south of Lauterbrunnen. There, after a completely unnecessary hike to the bus stop, we caught a bus back to our hotel.

High in the Swiss Alps: Lauterbrunnen 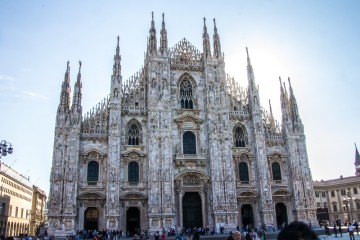