Please click on one of the photos to view them full-screen.

After viewing the Last Supper we decided to visit the Milan Cathedral (Duomo). Its architecture might be described as Ultimate Gothic or Gothic Gone Wild. I think it is really beautiful but the closer you get the more overwhelming it gets. There is so much detail!

The interior of the church is pretty similar to other large European cathedrals: rows of ornate columns, high vaulted ceilings, plenty of stained glass. We went in on a Sunday morning so services were in progress. A tiny congregation was gathered at the front. The organ was playing and the choir was singing. The music was beautiful, and I was able to capture some of that on video.

In the back of the church was an entrance to the “archaeological area” which took you below ground level to the remains of an earlier church built on the same spot. There we saw what’s left of an old baptismal pool which I thought was quite beautiful as well as functional. Check out the photos attached to this post to see it. If I ever build a church, I’m going to design its baptismal area like this one.

We then took the elevator to the roof. What they didn’t tell us was that the elevator only covered half the distance – there were still many, many steps to climb. They were made easier by the presence of the beautiful stone work of the church all around us, and the views from the top, which were stunning.

The roof was packed with people, and places to walk are few – it isn’t flat. So it was pretty hard to get around up there. But I was glad I went.  Enjoy the photos! I think that the gargoyles were my favorites.

More of Sunday in Milan

More of Sunday in Milan

You Say Turino, I Say Tirano 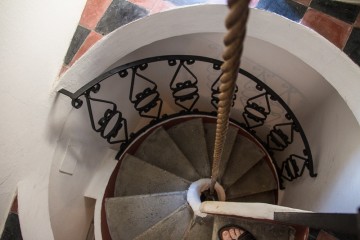 Steppin’ Up… In Vernazza