This is part 2 of our Tuscany Tour, taking up where we left off. We drove from San Gimignano to Monteriggioni, an even smaller medieval hill town with a circle wall and 12 towers in the wall. From below, on the road, the town looks like a castle. From there, driving through the beautiful hills of Tuscany, we went to Greve in Chianti, and finally to Montefioralle.

This is a typical road sign in Italy, showing that the town of Monteriggioni is only half a kilometer away. Note the use of stone walls, everywhere.
There are 12 towers as part of the wall that completely surrounds the town. The wall was the town’s defense in war during the middle ages, when it was caught between two rival powers, Florence and Siena.
Within this town square are at least two restaurants, a grocery store, and several shops. The town does not get a lot of tourist traffic because it’s difficult for a bus to get to. I’m not quite sure how that car got in there.
The town of Monteriggioni is entirely ringed with stone walls that look like this.
This Romanesque church dates from the 13th century. Though simple, it is quite beautiful.
I love the stone construction and the style of the tower in this photo.
Karen and Jean wait outside of a jewelry store in Monteriggioni.
I don’t know how old this wall is, but I’m in awe of the technique. The pieces fit together exactly. It’s really a beautiful stone wall.

Leaving Monteriggioni, we took an extended drive through the beautiful Tuscan hill country. We stopped several times along the way to take photos.

We saw many of these villas, surrounded by vineyards. Some of them rent by the week. Sounds pretty good…
In the Chianti region, wine grapes and olives are the two most common crops. These olives are for oil, not for eating.
We had a wonderful day together out in Tuscany. Florence is fantastic, but we would have missed a lot had we not got out of town for a day.

Our next stop was the little town of Greve in Chianti. Its main feature for us is the town square, which is really a triangle. Massimo’s favorite shop is a butcher shop, and he led a couple of us on a tour of it! There was also a nice embroidery shop there, and a ceramics shop where we purchased an unusual blue bowl and a small square tray with a black rooster on it.

In the town square (piazza) of Greve in Chianti stands this statue of 16th-century Italian explorer Giovanni da Verrazzano. He discovered, among other things, the bay of New York, and there is a bridge in the New York harbor named after him. Massimo asked us how one could possibly “discover” a bay, and none of us could answer him.
This boar stands outside of a large, impressive butcher shop.
This butcher shop in Greve had a stuffed boar on the sidewalk out in front, and various portions of his cousins hanging up inside.
Here’s something you don’t often see in the U.S.

Chianti is the name of the region between Florence and Siena, Italy. Traditionally only wine made from grapes grown in this region may be called Chianti. This Chianti Classico brand uses the black rooster as its logo. There is a local legend about a black rooster figuring largely in a dispute between two rival powers, Florence and Siena. “DAL 1716” means that the company was established in 1716.

Karen says I should tell the story, so here goes. Back in medieval times, there was a big rivalry between the two city-states of Florence and Siena. Often the two were at war, and the boundary between them was subject to being moved. On one occasion, to avoid further bloodshed, a bargain was struck between them. A day was selected in advance, and the plan was when that day started, one man from each city would start out along the road in the direction of the other city. Wherever they met, that’s where the border would be drawn. So that they would have a fair start, they agreed that when they heard the rooster crow to start the day, that’s when they would set off. The citizens of Siena chose a fat, strong red rooster to be their starter, but the crafty Florentines chose a skinny, starving black rooster to sound their signal. The hungry bird woke first and began to crow, while the fat rooster slept in. By this tactic, Florence gained a larger portion of territory than Siena. So the black rooster is the symbol of the winner in Chianti.

The last stop on our Tuscany Tour was the tiniest town of them all: Montefioralle, which sits atop a hill above Greve in Chianti. Massimo told us that much of this town has been abandoned – there are homes sitting empty there that can be purchased. We tried to talk Steve into buying one and renting it out as a vacation rental.

This is the most recent story.

A Stroll Along the Arno 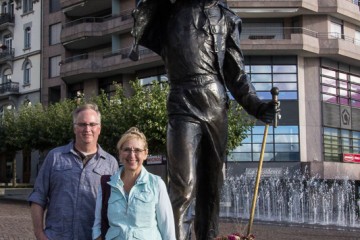