I have this fantasy baseball team called the “Cottage Cheese.” Cottage because I live on Cottage St. in Salem, and Cheese because it seemed appropriate for Cottage. I’m not very good at fantasy baseball, so each year, around August, when it becomes clear that I (once again) am not going to win, I publish my annual Cheese Lament.

to be sung to the tune of Marty Robbins’ “El Paso”…

Down in his East Salem Cottage Street villa, 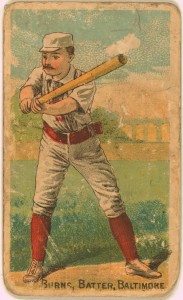 Cheese Man was wishing he knew what went wrong.
Hitters stopped hitting, his pitching staff busted,
The Cheese are in last place as he writes this song.

Out of the gate they’d come bashing that baseball,
Hitting and pitching were leading the league,
Quickly their promise was snuffed out completely,
Suffering from chronic post-April fatigue.

“What has gone wrong with my players?” I cried,
“Why have we sunk to last place?
Old Jamey Carroll and Pittsburgh’s Neil Walker
Anchor my infield with style and grace.”

I’d filled up my bullpen with youngsters with promise,
The A’s Andrew Bailey and Boston’s Dan Bard,
Hired more starters than anyone else did,
Figured I’d win it – this can’t be too hard.

Then came the injuries – the Marlins’ Josh Johnson
Can’t seem to throw any more from the mound.
Phil Coke combusted and Jeff Francis floundered,
Nova: demoted and Litsch ain’t around.

What of the young phenom strangely named Gee?
Couldn’t he keep up the pace?
Dillon was willin’ but what was he swillin’?
He and the Cheese were soon out of the race.

Homers from Cruz and that Sox Carlos Quentin –
They were the Cheese who made April such fun.
Who do we blame for our plunge to the basement?
Young Jason Heyward and old Adam Dunn.

Now it’s two surgeries for Kendrys Morales,
He was supposed to be leading my team.
Yes, I am thankful for young J.J. Hardy,
One of my better draft picks, it would seem.

“What do the Cheese have to hope for?” I cried,
While from my eye dripped a tear.
Cottage St. fans must exhibit some patience,
All I can say is, well, “Wait ’til next year.”