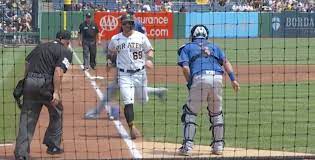 As the President of Newberg Youth Baseball, there are plenty of things I see on a baseball field that make me scratch my head, laugh a little, or perhaps cause me raise my voice a bit. But it’s youth baseball, and those things are expected. That’s why, when watching highlights of yesterday’s game, I was thoroughly stunned to see what happened in the Mets/Pirates game.

Taijuan Walker was pitching for the Mets in the bottom of the first inning. The bases were loaded, and the batter topped a ball so that even though it was a full swing, the ball trickled down the foul line, hugging the chalk inch by inch until, in what was a decisive move for how close the ball was to the line (on the line, in my opinion) Walker himself came darting off the mound and swiped his glove at the ball to touch it while it was foul. Except that it wasn’t foul. The ball went flying all the way to the backstop where it came to rest while Walker and several other Mets, including their Manager Mel Rojas who would be ejected for his antics, argued with the umpire.

What they failed to realize was that because the ball was ruled fair, it was still in play. The Pirates third base coach, who was paying close attention, started waving his arm in violent circular motions, indicating to the runners that they should keep running. All three runners scored on the play, while the batter ended up at second base. It was ruled a single with an error.

I am not sure I have ever seen three runs score on a ball that didn’t travel more than 20 feet in youth baseball, let alone professional baseball, but that is exactly what happened yesterday. While Cottage may have not enjoyed it (Walker is his pitcher), I did. It is sometimes good to be reminded (like the popup that Chris Taylor missed yesterday…sorry, Dave) that the big boys make dumb mistakes just like the little kids do. The Mets actually came back to win on Michael Conforto’s home run in the ninth, a true testament to the determination of the Mets (or perhaps the sad state of the Pirates bullpen). Anyway, here is a clip of the play in case you haven’t seen it.