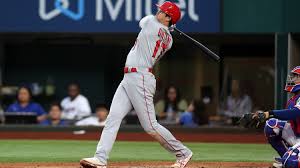 It’s Shohei Ohtani week at Baseball Prospectus.  It’s all about how amazing he is as a two-way player doing things even Babe Ruth never did in a single season, blah, blah, blah. Plus how nice he is… makes a non-Cheese kind of sick.

It’d be one thing if he didn’t deserve all this praise.  It’d be another thing if he had signed with the Mariners like he was supposed to.

On the other hand, it’d be still another thing if he was on the Tornados, or the Rosebuds, or the Dragons, or the Alleghenys – you know, the teams that have been hogging up all the EFL championships for the last 5 or 6 years.  As long as he stays safely tucked away on a team not breathing down the Wolverines’ neck, it’s tolerable.

I admit it: when the Angels were in Seattle last week, I wished I was going to the game.  I am hoping our next trip to see my daughter and grandsons in Seattle will be while the Angels are in town. He’s the one must-see individual player in baseball for me now.

I also admit this, which reflects even worse on me than everything else I’ve said:  in this video of the first 33 Shohei Ohtani home runs of 2021, the part I enjoy most is watching the pitchers’ reactions. There are so many ways to express deflation and recognition of doom – and, in the context of something trivial like baseball – they are all fun to watch.

So – I can’t do anything about Shohei Ohtani Week.  Baseball Prospectus has declared it, and they aren’t interested in my individual opinion.  And anyway, if they were interested, I’d probably say, “Oh, all right, go ahead.  He probably deserves it.”