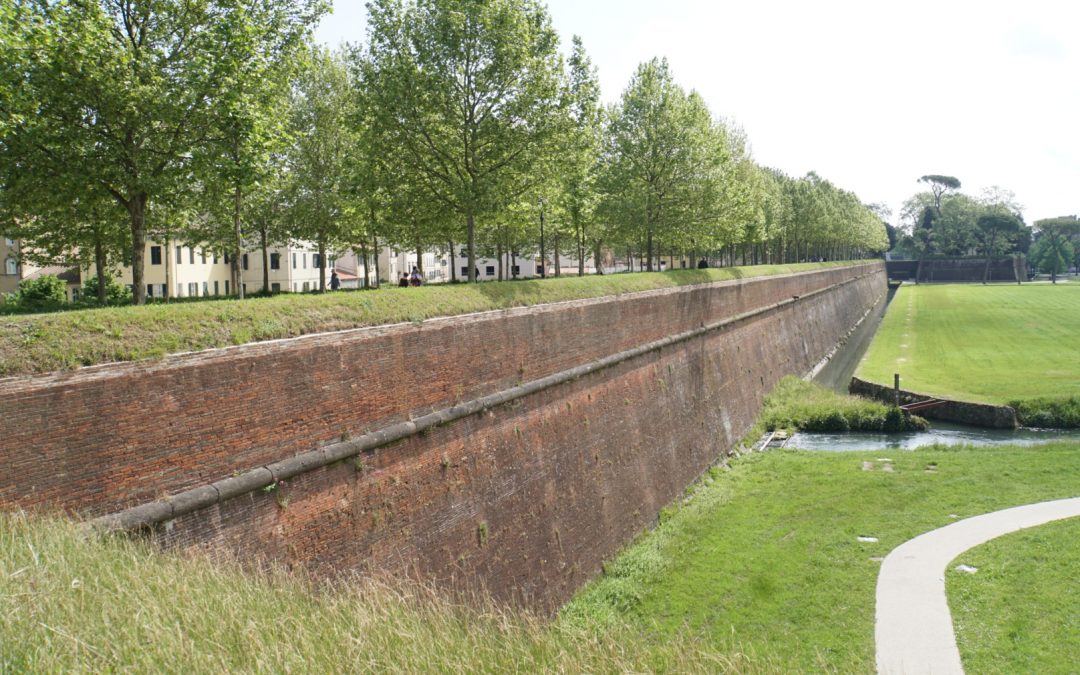 This is part of the wall that surrounds the city of Lucca.

It’s important, when you’re planning a trip like SwItaly 2, to visit places that offer unique opportunities. You don’t want to do the same thing every day! One of the big attractions of Lucca was the opportunity to ride bicycles on the wall. We’ve walked the walls in more than one European city, but never rode a bike on one before. The walls around Lucca are 100 ft wide and planted with trees and a path to make a nice donut-shaped park.

This wall protected Lucca from invaders through the Middle Ages – no one got through. They were an independent city until Napoleon took over, and after his reign they became part of the new Italian nation in the 19th century.

The wall is not super-high, but it is 100 feet wide, and had places in it to shoot cannons out from. I don’t think that they ever had a battle, though.

You can see the row of trees on top, lining the two sides of the walkway/bikeway. Lots of people ride bikes up there.

We rented bikes – 4 euros for the hour – and rode around the city. It was a beautiful day! It was an easy, level ride and we had lots of good views both inside and outside the wall.

We rode for a while – probably not an hour – and had a terrific time, although certain portions of my anatomy were quite pleased when we finished. 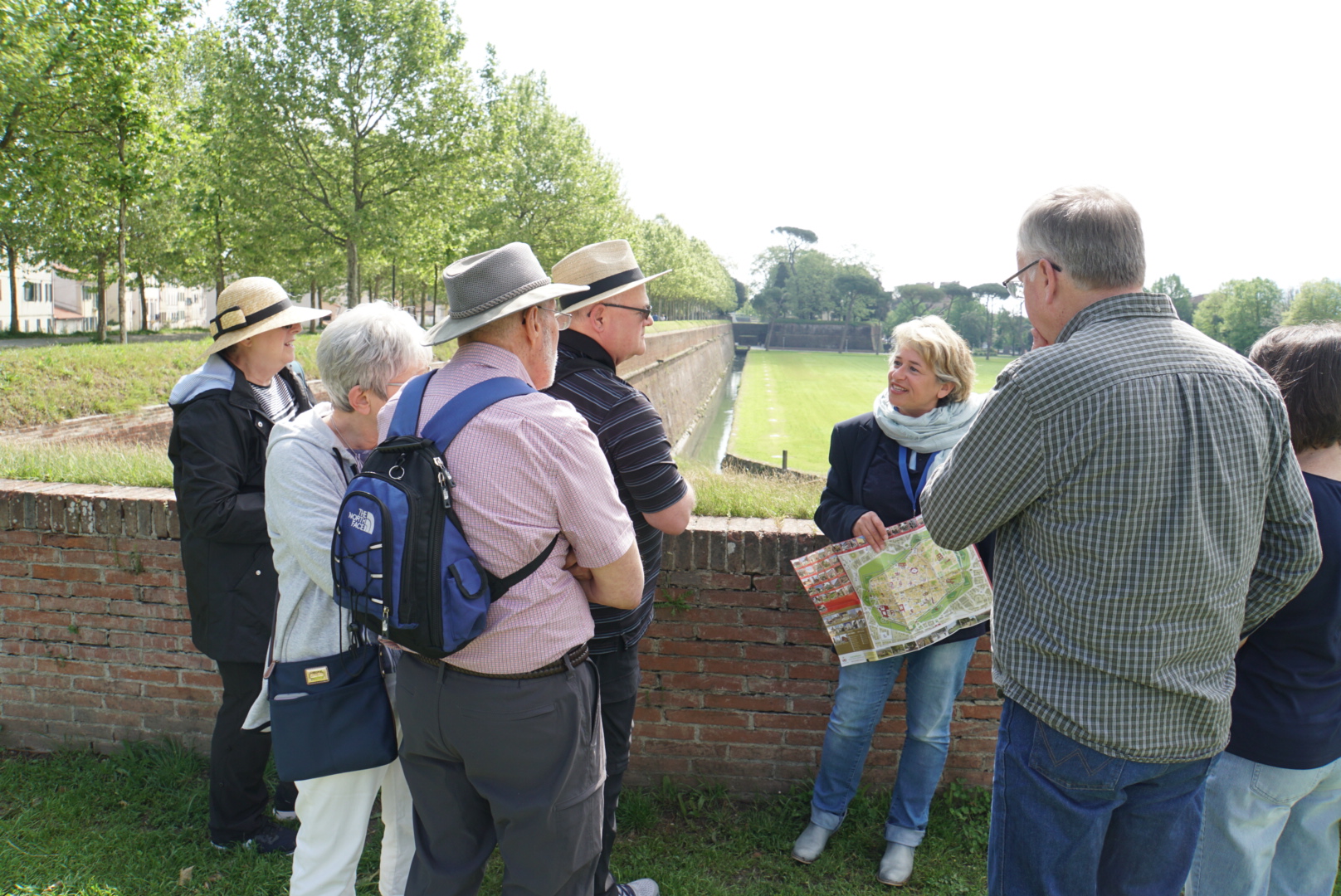 Vittoria, another terrific guide supplied by Tuscany Tours, told us all about the wall and the history of Lucca. Vittoria is from Lucca and is immensely loyal to her city. She was quite disappointed to hear that we had planned a day in Florence; apparently there is a strong rivalry there! 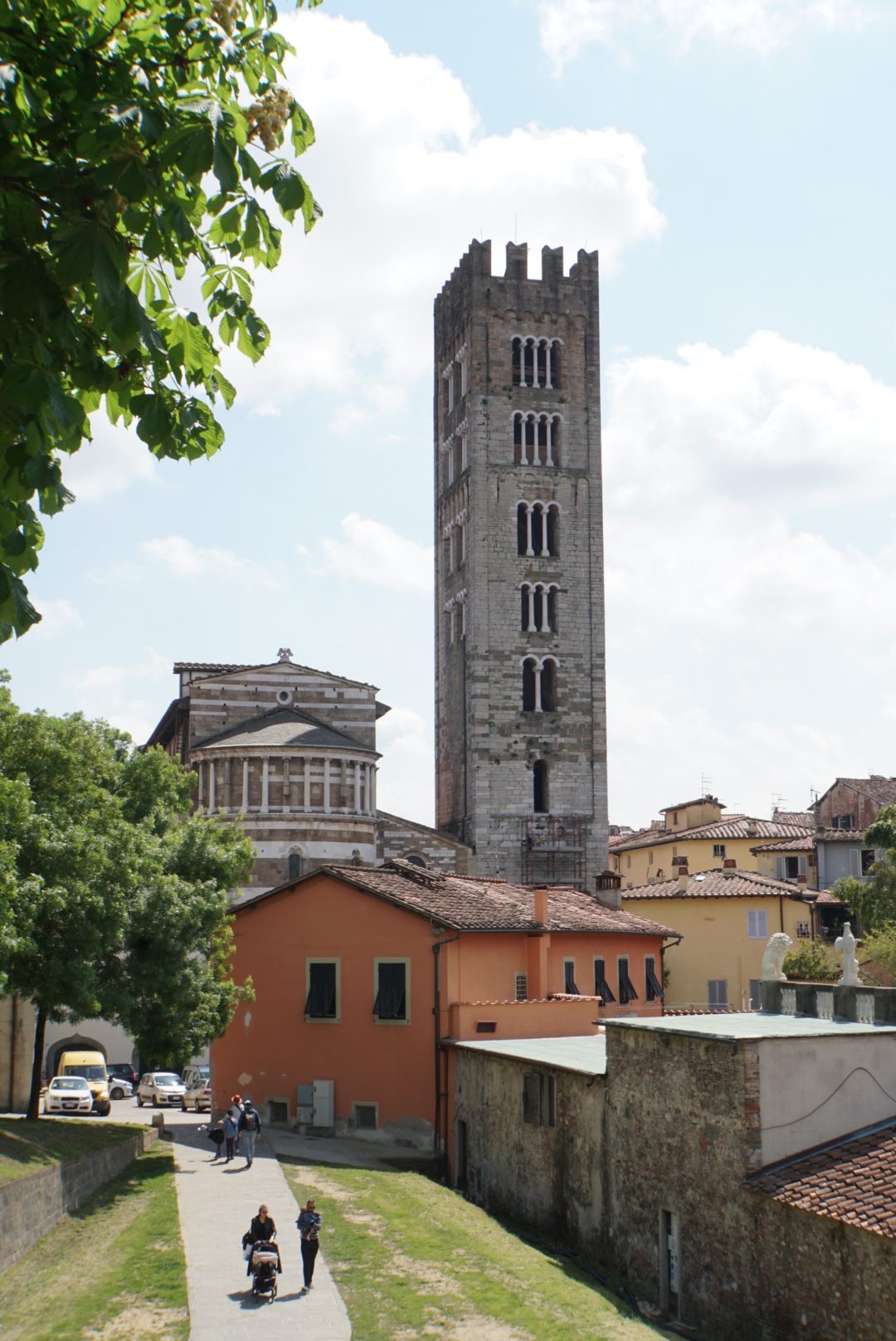 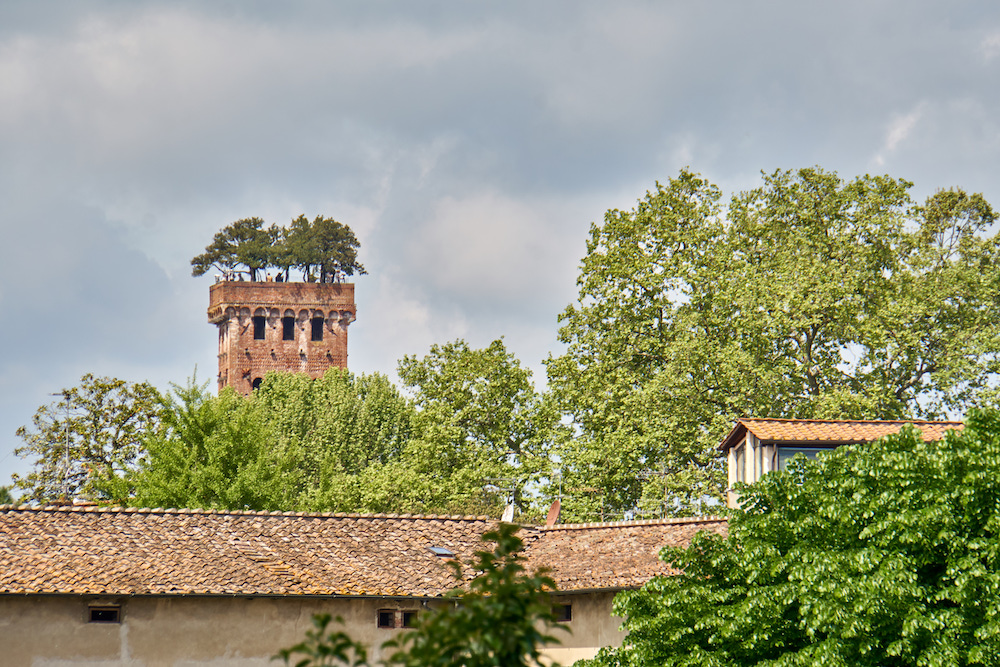 Here are two views inside the city from the wall. Lucca, like San Gimignano, has a few medieval towers remaining. In those days, building a tower told the world that you were rich and important. Of course, the taller the tower, the more important you were.

The city had a limit on tower height, frustrating one rich guy who really wanted to show the world that he was tops. So he planted trees on top of his tower to increase the height, thereby winning the tower competition. 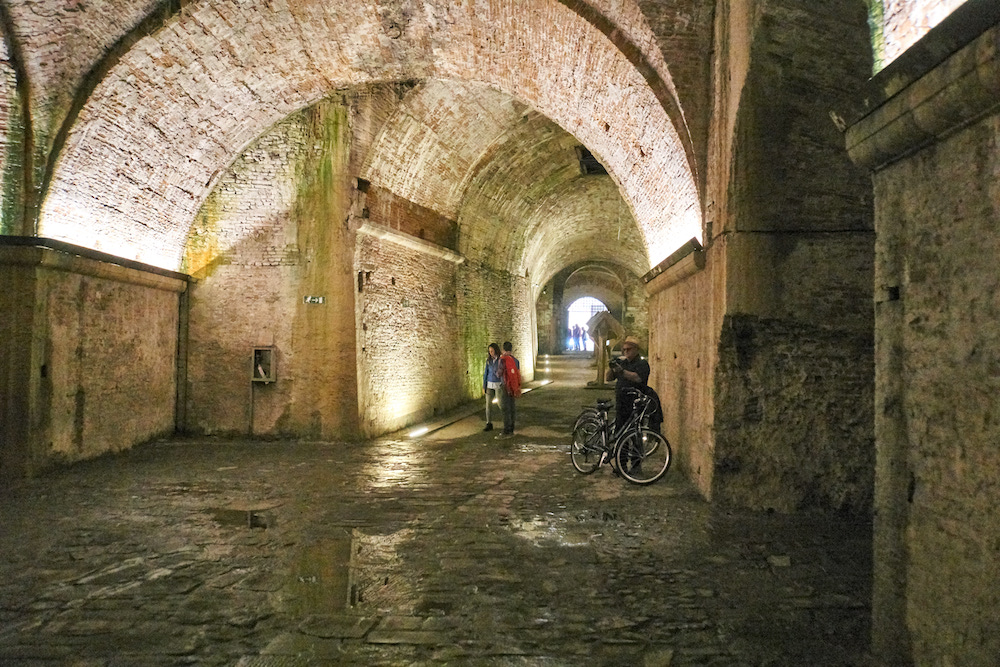 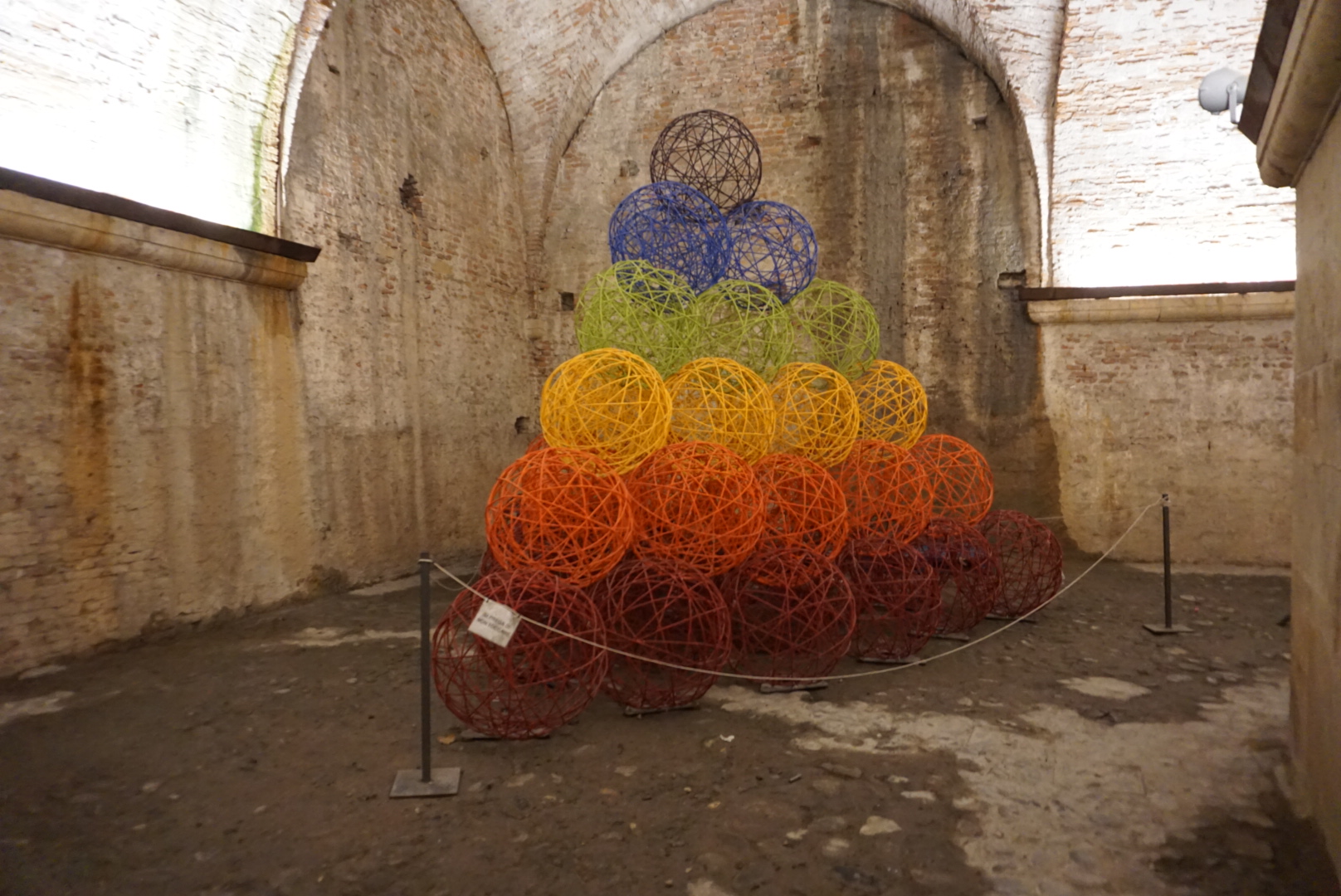 This paper sculpture is from a German artist. It is supposed to represent peace and love, qualities for which Germans are famous. 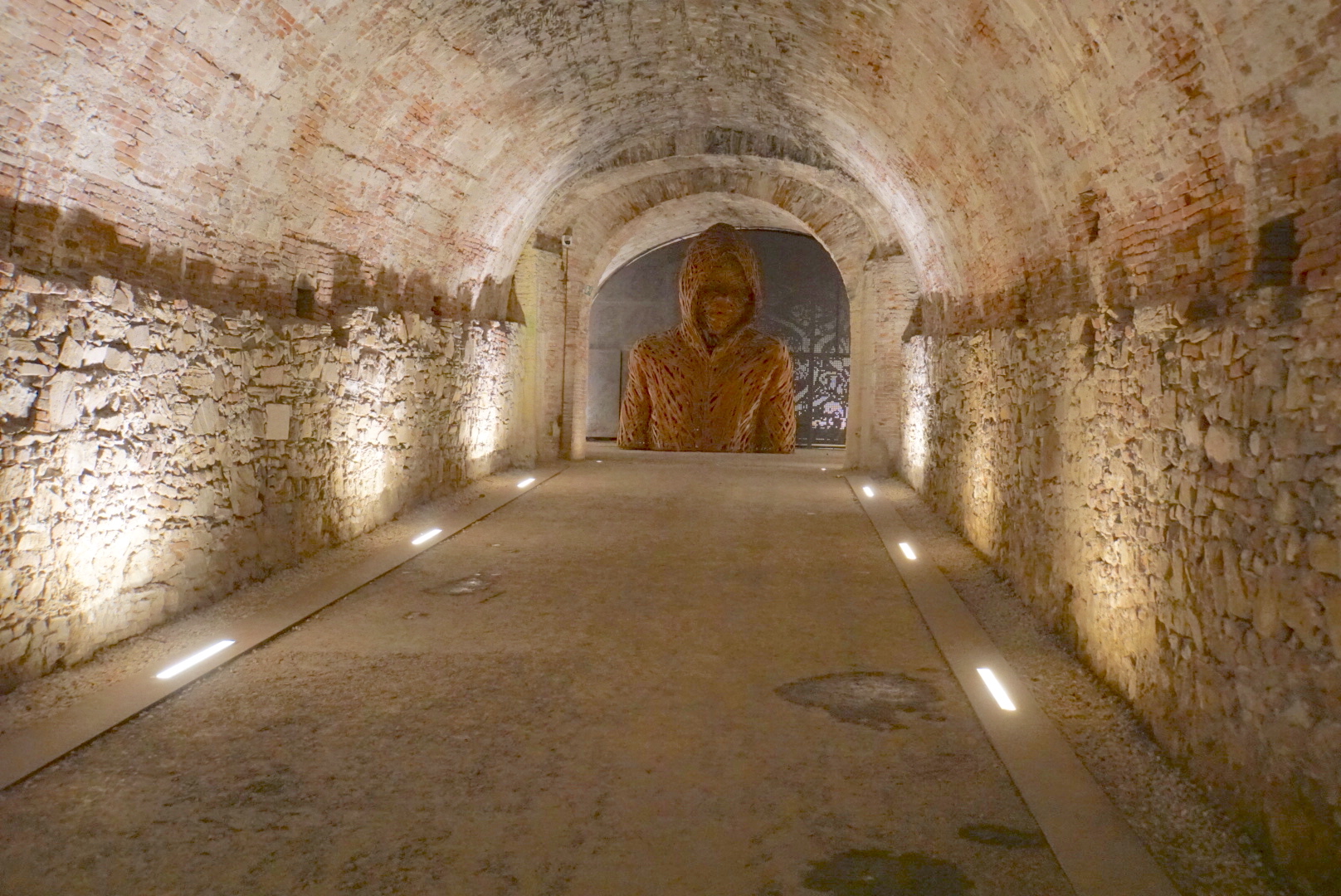 This paper sculpture, from an American artist, won the competition four years ago and has been here ever since. 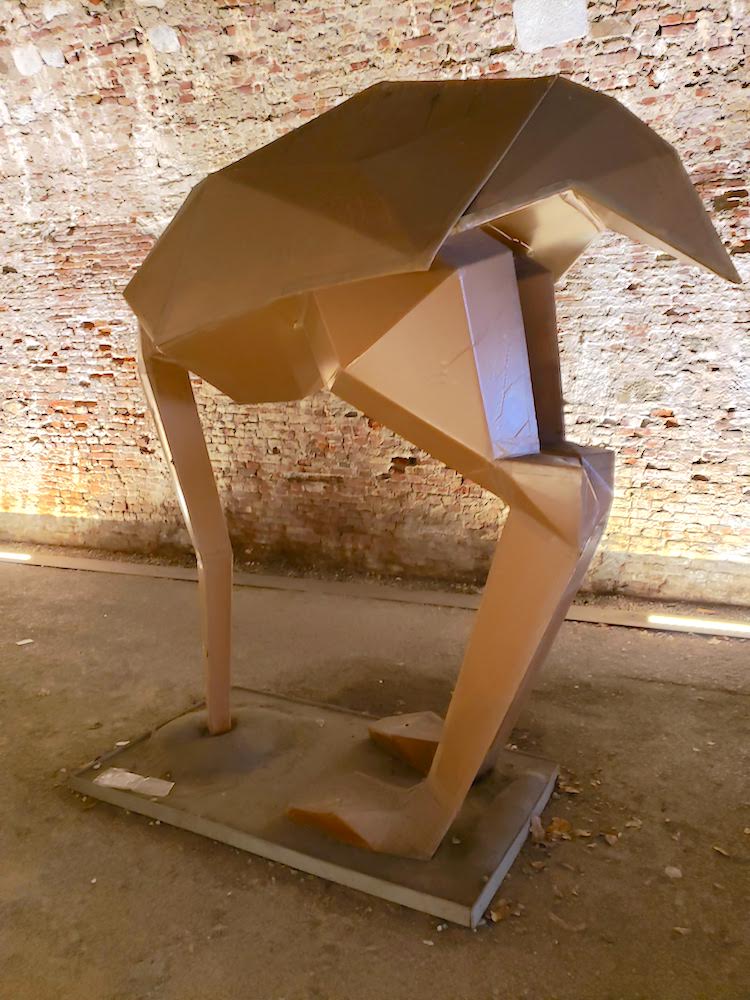 This sculpture represents an ostrich with his head in the ground. There was a whole row of them! (photo by Joyce Gleason)

Underneath the walls they had created space for the soldiers to assemble to be ready to ward off an attack. Now it’s just an interesting place to walk/ride through, and they use it for an art gallery of sorts.

Vittoria told us that Lucca is the center of paper production in Italy; 80% of the TP used in Italy comes from Lucca, she said. Anyway, there was a recent art contest where artists were asked to submit 3-D art made from paper. The exhibits remaining from this contest are displayed under the wall. 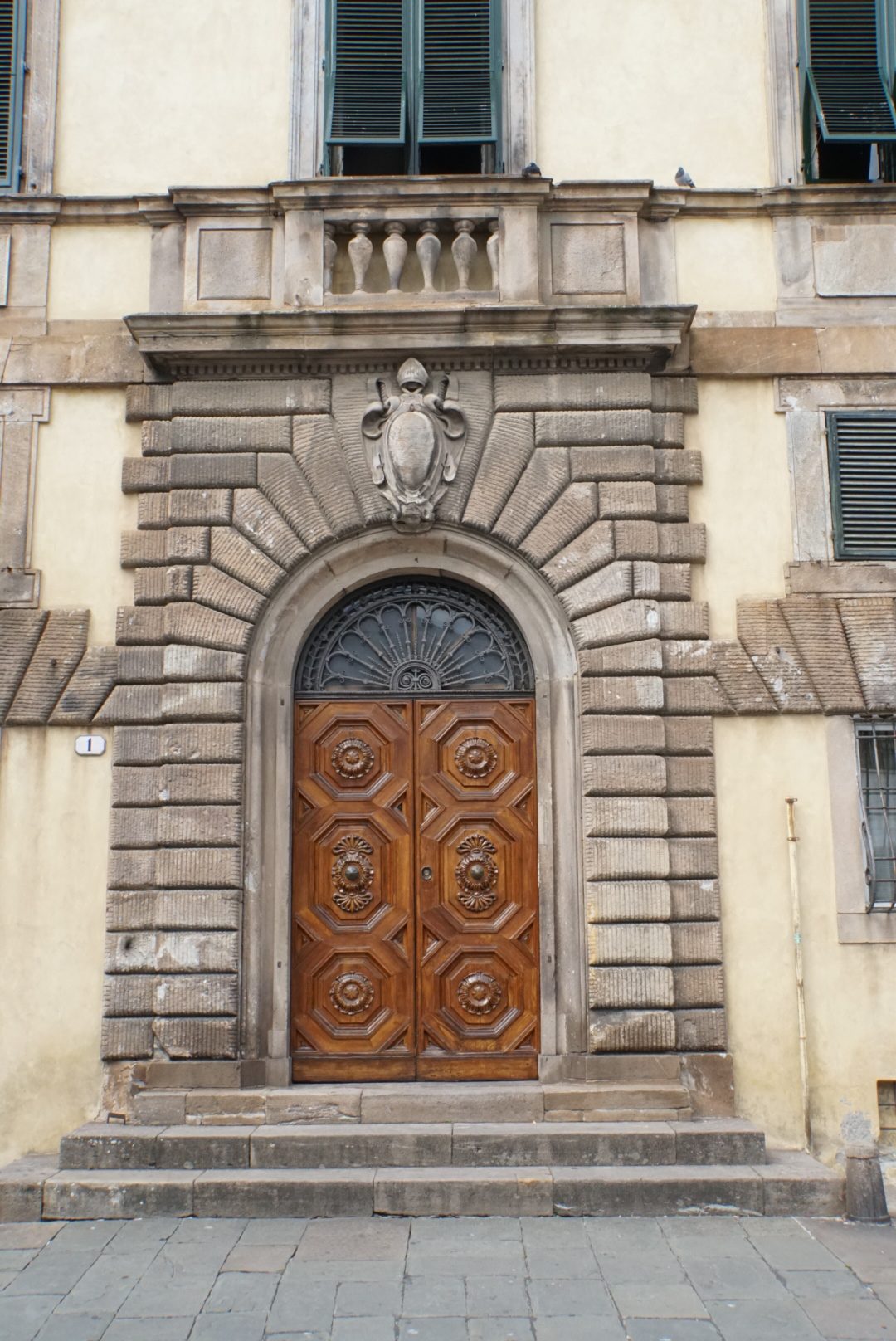 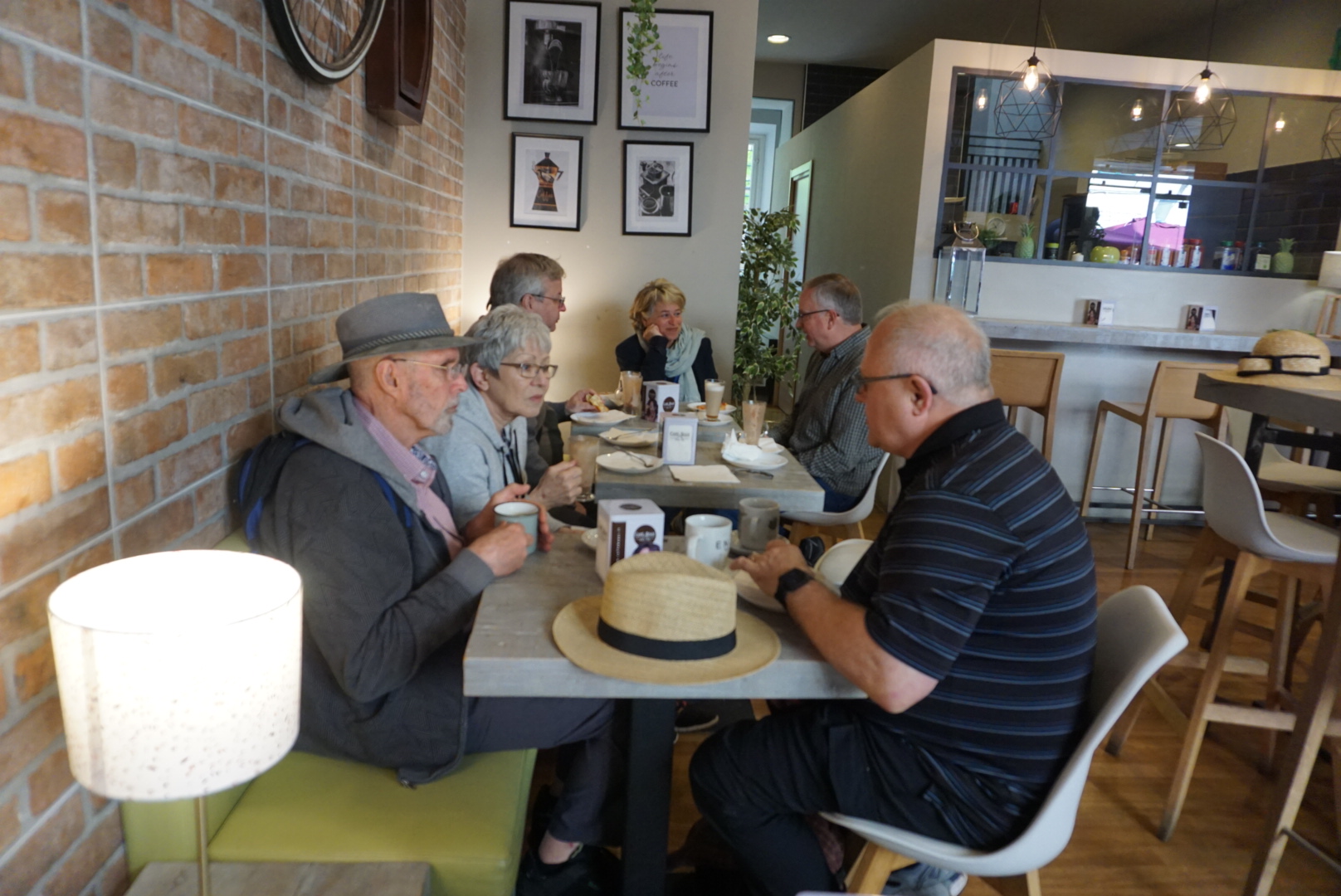 After the wall we stopped for a much-needed coffee break. Being a tourist is hard work! 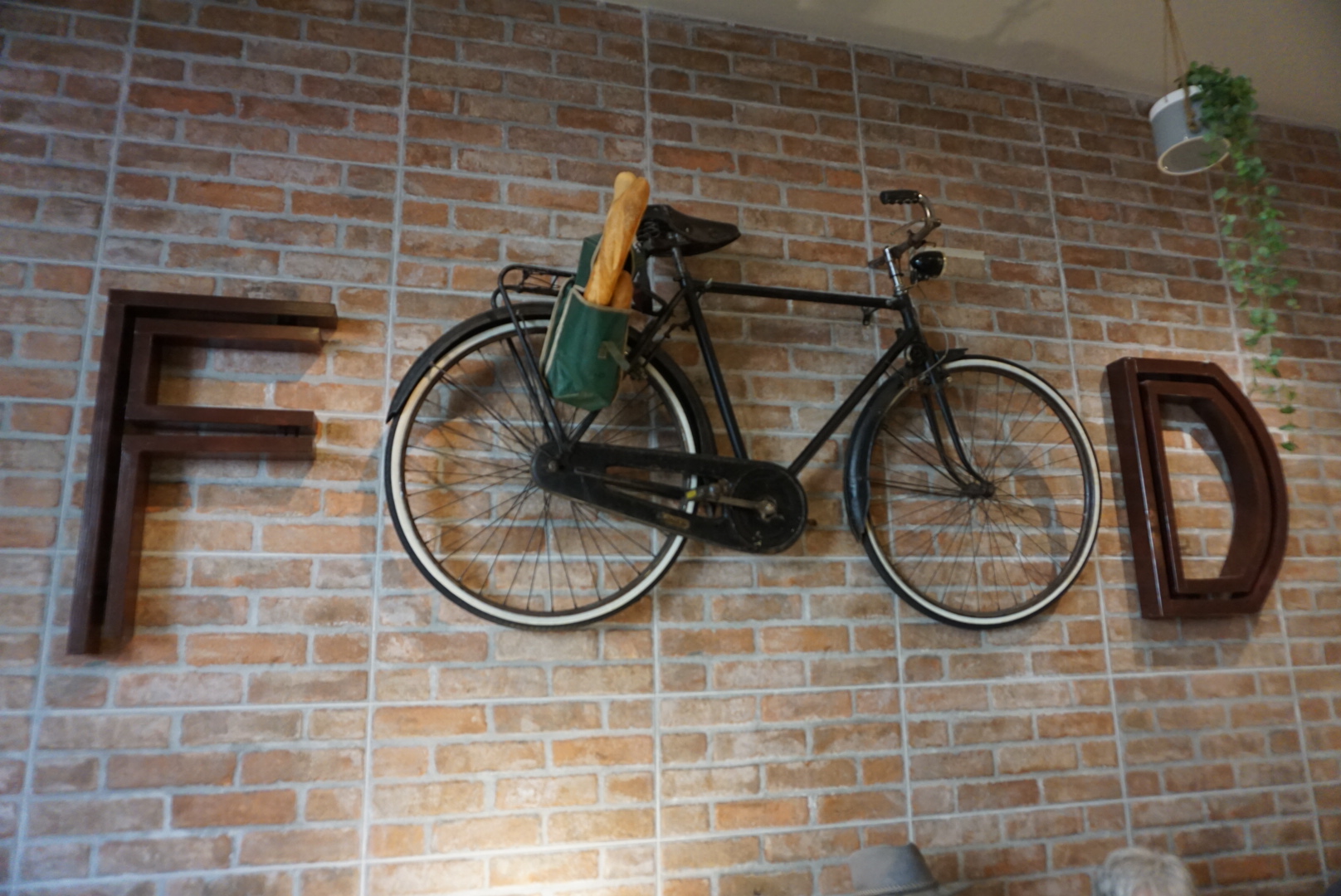 This sign is on the wall of the coffee shop! 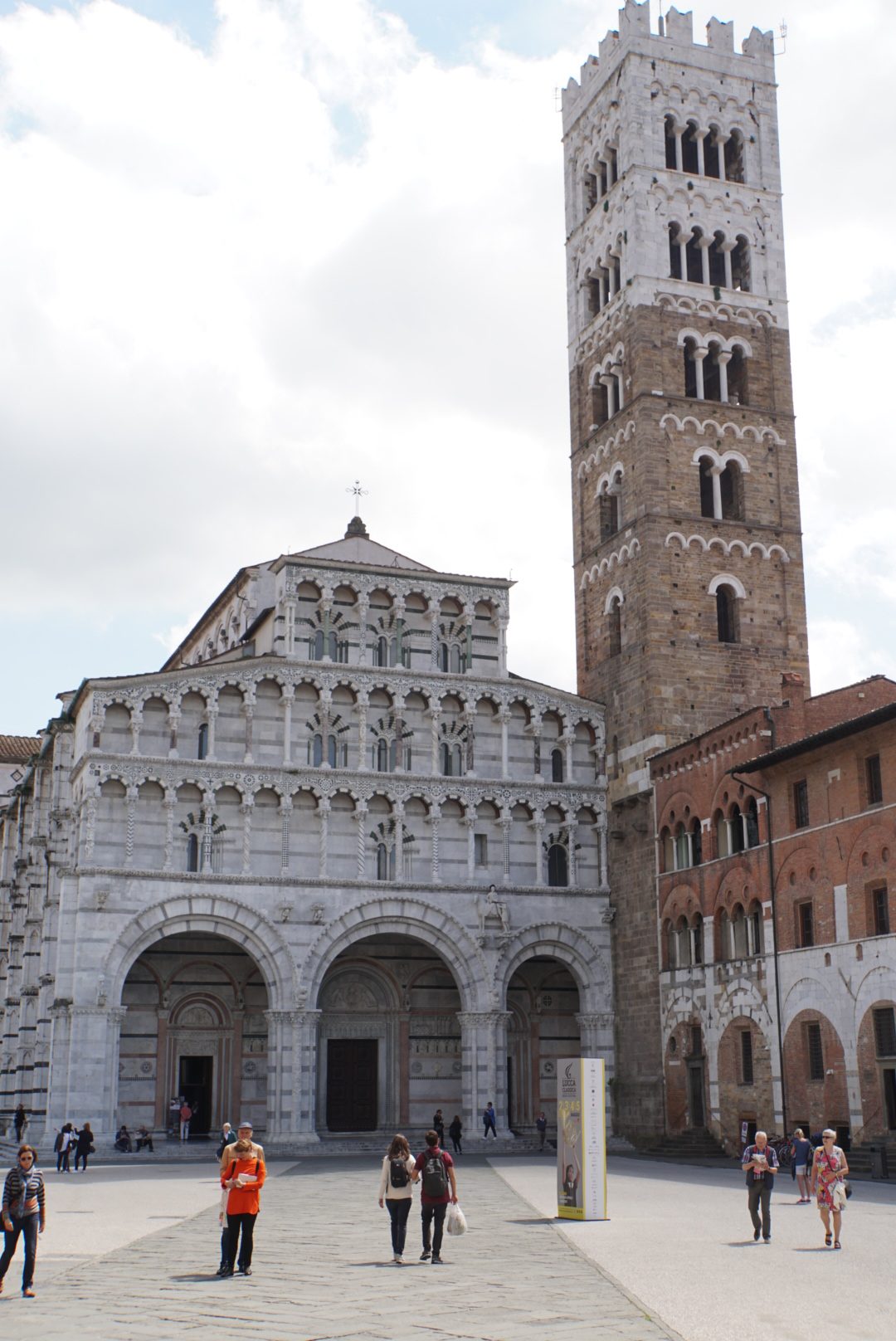 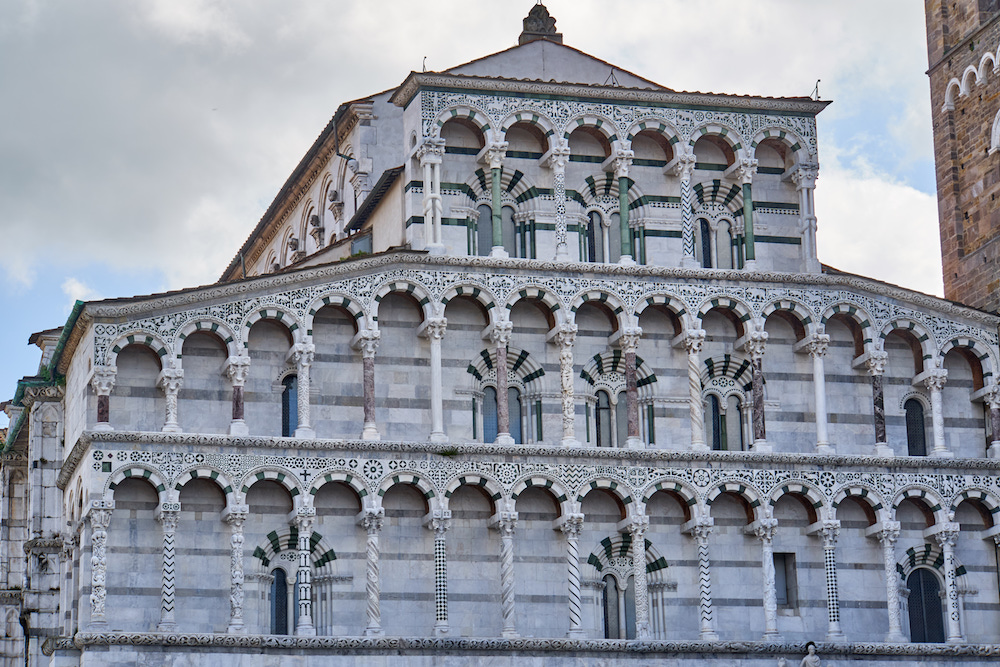 Above is the top of the façade of the “new” cathedral in Lucca. (This picture is worth a click to enlarge it.) I love the colors and designs in the row of columns; no two are alike.

Above, you see the facade of the new cathedral, up against the bell tower. Note the right-side arch – it is noticeably smaller than the other two. The reason for this is that the architect was out of space. The facade, which is what you see here, was added long after the church 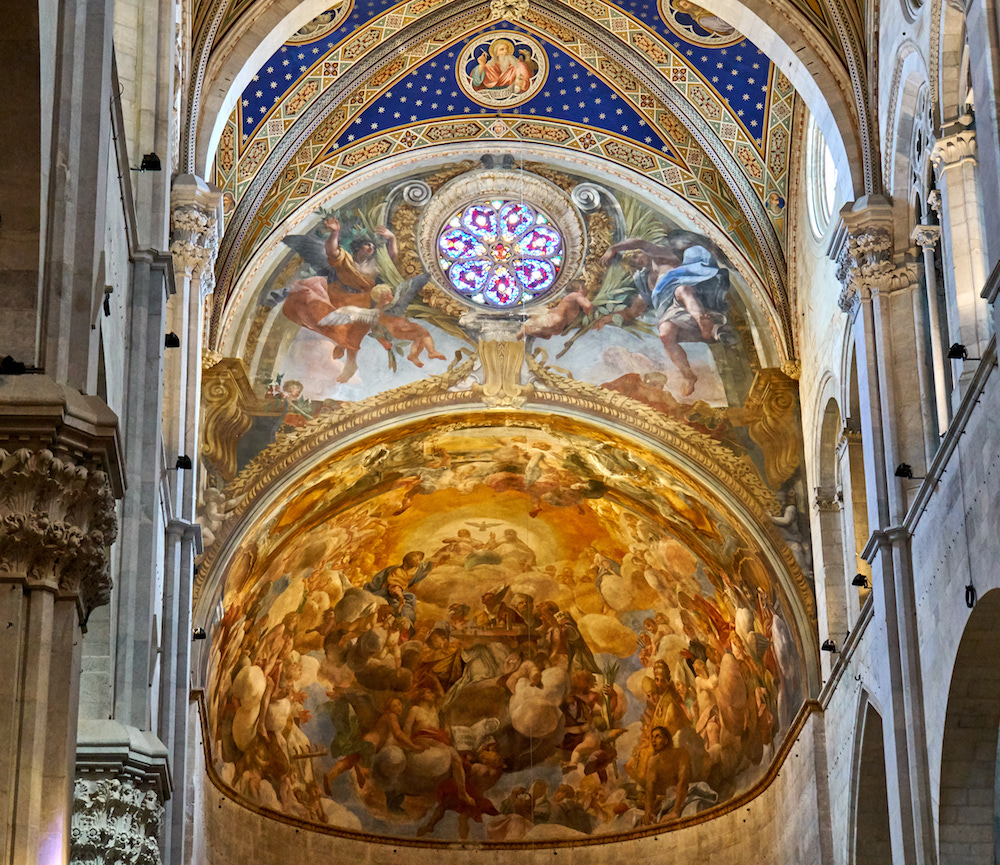 (behind it) was built, and it was right up against the bell tower. Neither of the buildings could be moved, so they had to compromise on the third arch. (Why couldn’t they just make all three arches smaller? No, I’m not an architect.)

Left: the altar area of the cathedral.

We’ve seen a lot of cathedrals, and they are beautiful! We love the pillars, the ceilings, the altars, the walls, the sculptures. But I also like the floors. They are often made of marble, and they are usually beautiful or at least interesting.

I’ve seen this design before; I’m not sure what its purpose is but it is a great optical illusion. Click to enlarge, then stare at it long enough and the cubes will invert. 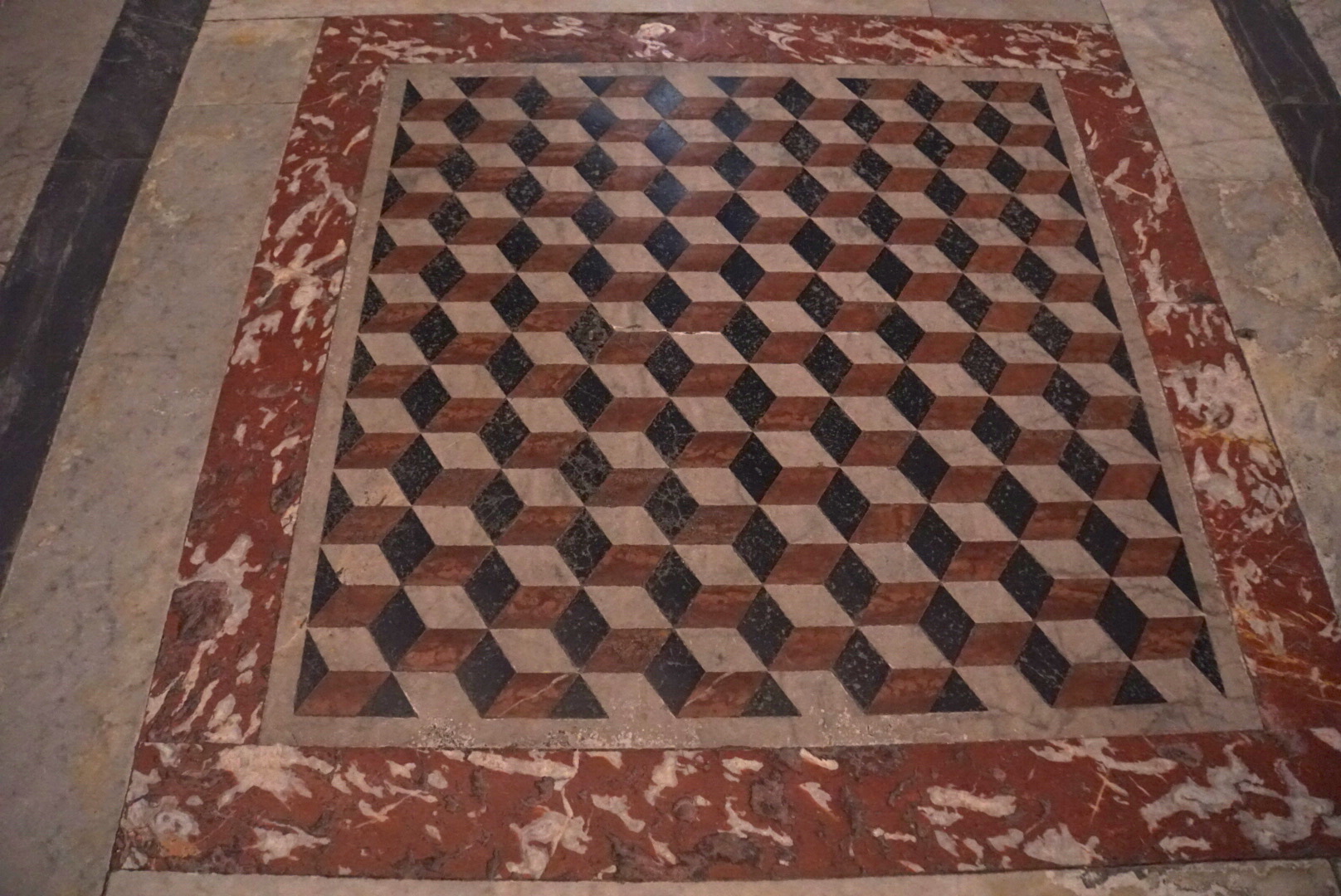 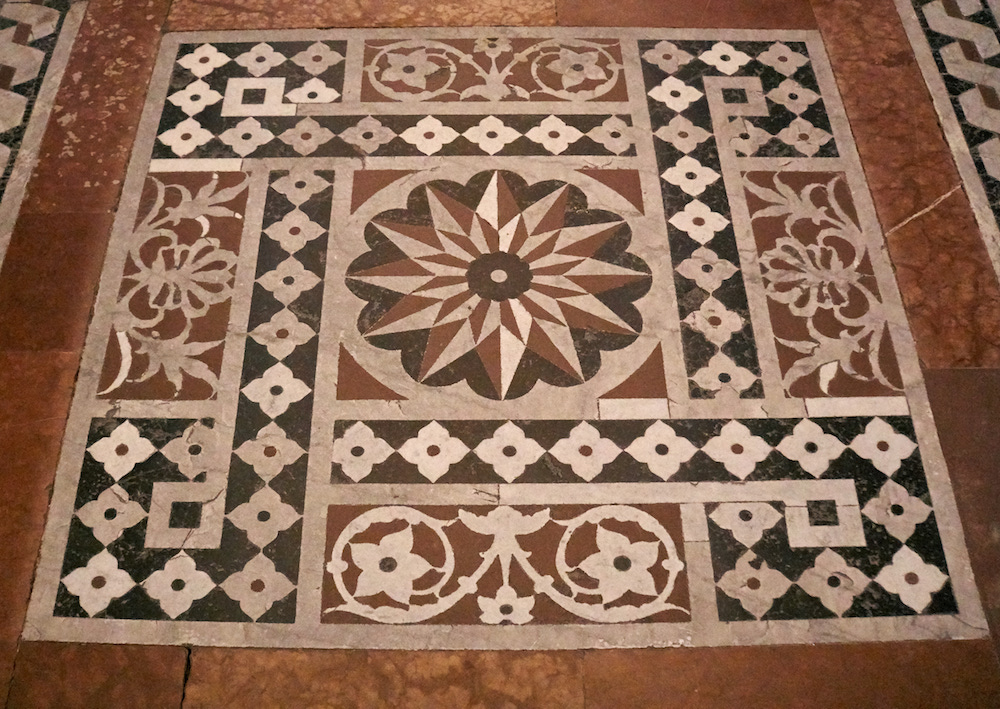 If I ever have my own office again (not very likely) I want one of these for my door. 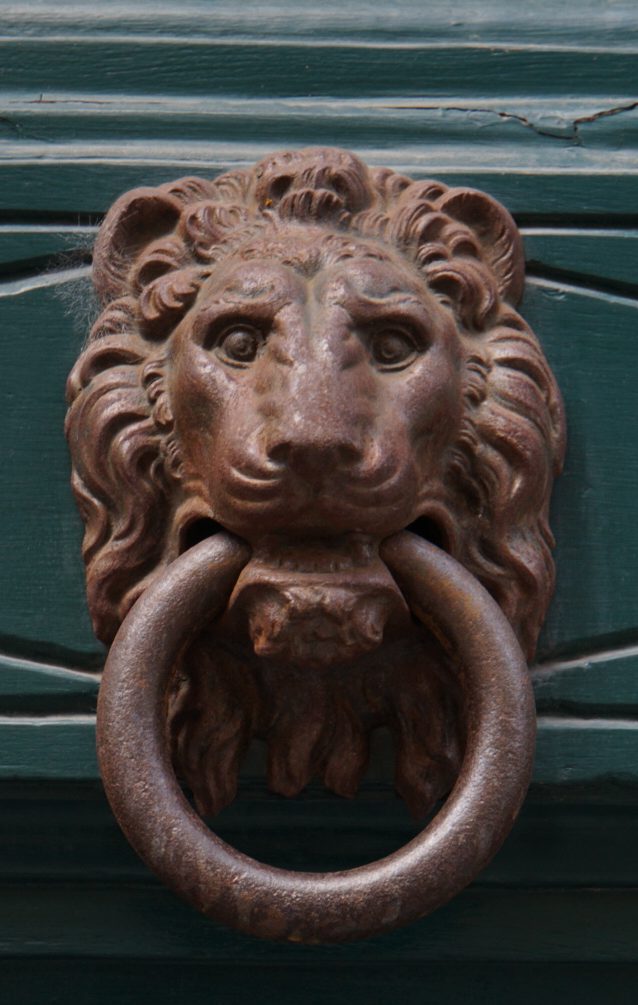