I turned on the Mariners game in the 4th inning Thursday evening, to listen to Felix Hernandez make what everyone is assuming is his last start as a Mariner.  I panicked when I remembered he was pitching, because there have been some games lately where he wouldn’t have made it to the fourth inning.

I did not want to share this moment with Rick Rizzs, who seems to be a genuinely nice guy but I am a genuinely judgmental one, so it doesn’t work out between us.   I listened to the A’s radio announcers instead, who are very good and very professional and super very respectful toward Felix Hernandez.

Felix sailed through the 4th inning, the Mariners did their usual flailing, and then Felix took the mound in the 5th.  Shed Long bobbled a grounder, opening the door, and soon Felix had the bases loaded and two outs.  Of course a win was not in the cards for Felix’s  last outing — he hasn’t won since April 1 — but I didn’t want the game to be an embarrassment, either.

A flash flood of dread surged over me as Chad Pinder drilled a ball to left center.

“Dylan Moore is racing back” called the A’s announcer, as I remember it.  “The ball is over his head and he makes a leaping incredible CATCH!!!”

Scott Servais sent Felix out to get the first batter in the top of the 6th. With his 106th pitch he got Robbie Grossman to hit a routine fly to center. The last man to face Felix, maybe. The last man he got out.

Servais came with the hook. Felix clung to the ball for a bit, stretching his Mariners career out a couple more seconds. He hugged his infielders, tears in his eyes (and Kyle Seager’s too), then left to a standing ovation, with several salutes to a HUGE King’s Court (23 sections of seats, 10,000 fans, about half of the entire attendance).  As Aaron Goldsmith put it, “It’s like nothing we will ever see again.”

Through most of the next half inning, the fans chanted “Thank you Felix!”

The M’s lost, of course, dropping them 30 games behind the second-place A’s.  Felix ended in all likelihood his last season 1 – 8, with his season ERA pared a little to 6.40, his career mark rising microscopically to 3.42.  He said after the game he wasn’t ready to retire, but apparently everyone has agreed he’s not going to pitch in Seattle anymore.

Ryan and I talked later and agreed it would be better if he did retire.  But on further reflection, I don’t know.  I think he’s just two good seasons from the Hall of Fame: 31 wins to 200; 271 innings and 476 strikeouts to 3000.  I don’t think he’ll get in without at least two of those three markers.  Felix thinks he’s still got it.  And Felix is a stubborn man.

About 8 years from now would be a perfect time for us to take Enzo to Cooperstown, don’t you think, Ryan?

I read a Mets fan’s blog Thursday afternoon, speculating on what his team should do.  He believes the Mets need to find a couple of new pitchers.  And the one he hopes slots in as the Amazin’s fifth starter?  Felix Hernandez.

Please. Not the Mets. But even so — even if it is the Yankees — I’ll root for him. 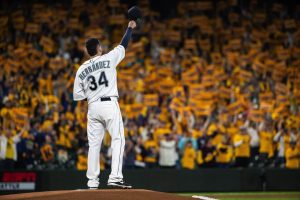