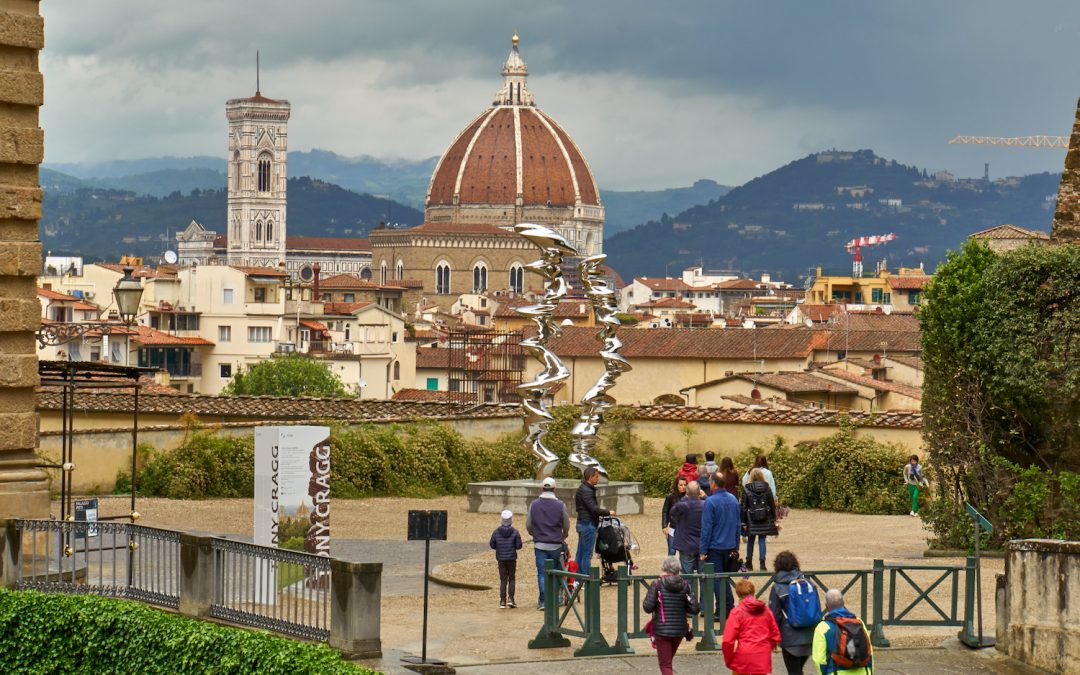 View of the city of Florence from the Boboli Gardens

Our last day in Tuscany, and our biggest city of the trip. Florence is way too big to cover on a one-day trip, or even in a week, but we chose a few things to see – and even those few turned out to be too many for us. We had a wonderful day despite a pouring rainstorm and tired feet.

We started our day with a walk along the Arno, the river that splits Florence. The river is lined with beautiful architecture on both sides. The colors of the buildings are warm.

This was my first time ever to see lampposts with knees and feet. This one could catch for the Dodgers.

(As always, click on pictures to enlarge them and see more detail.) 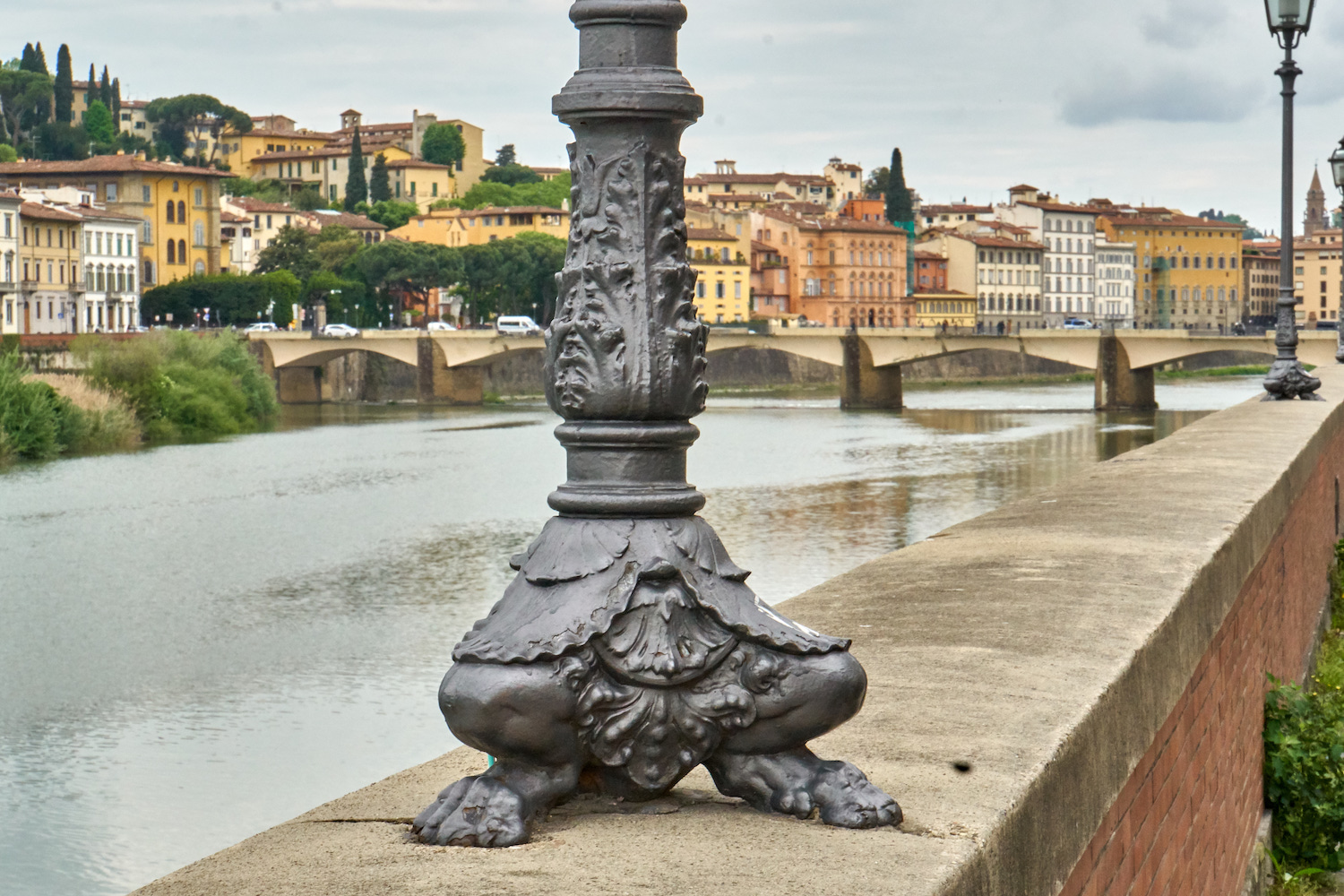 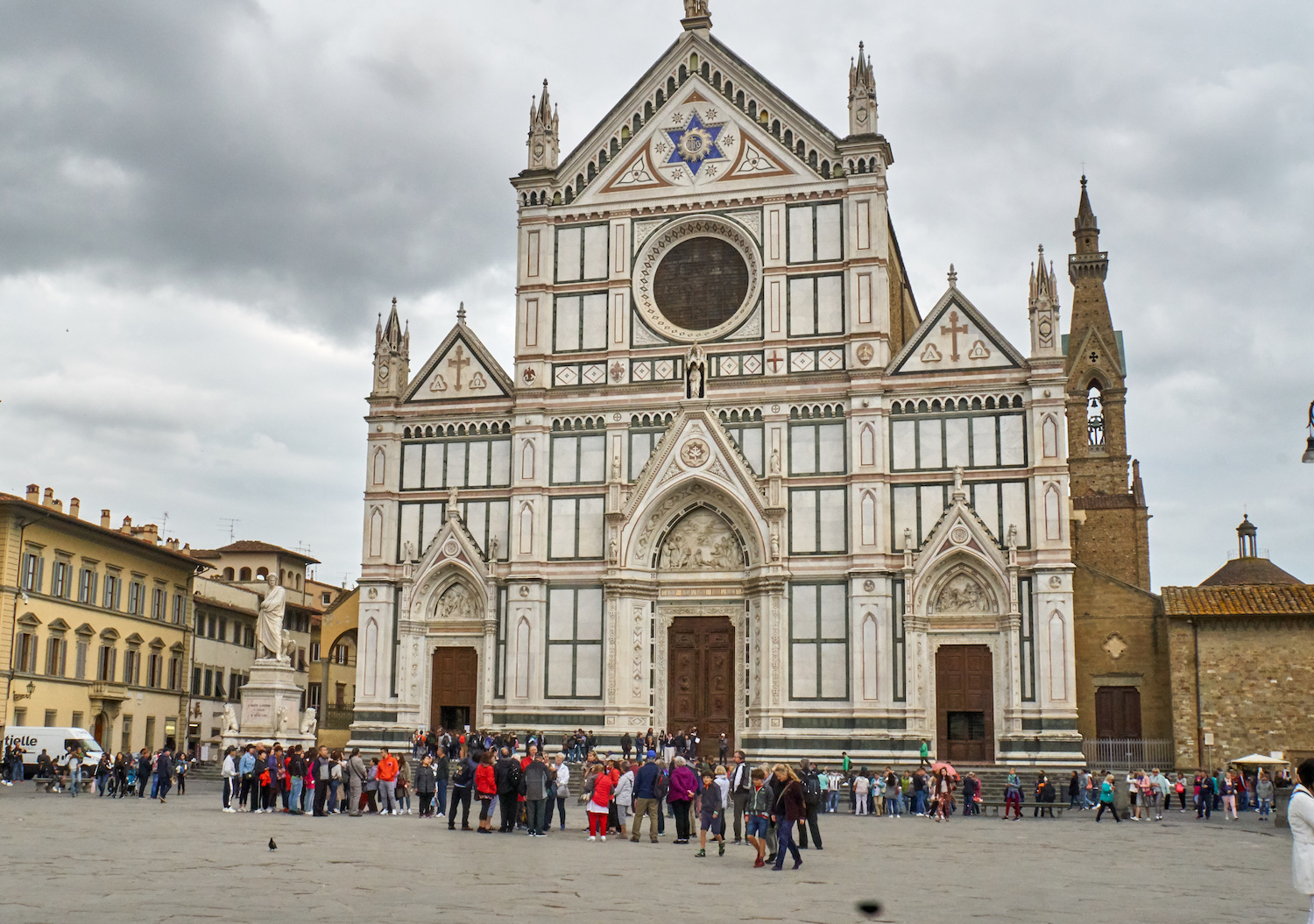 The church of Santa Croce. The colors are typical of Tuscan marble (red, green, white) and these are the colors of the Italian flag. And sort of like Spumoni ice cream.

Our guide for the day was Kate, last in a series of terrific guides from Tuscany Tours. Kate has lived in Florence for the last 20 years, but was originally from Great Britain so her English was better than ours.

We gathered in front of the church to hear her story about this space.

This huge paved square in front of the church is the location of an annual soccer match between various areas of the city. Well, sort of like a combination of soccer, rugby, wrestling, and boxing. They are not allowed to kill each other, but maiming is acceptable. They cover this pavement with about three feet of sand. The guys strip to the waist, coat themselves in oil, and go at it. The competition is normally called before time is up due to excessive violence. 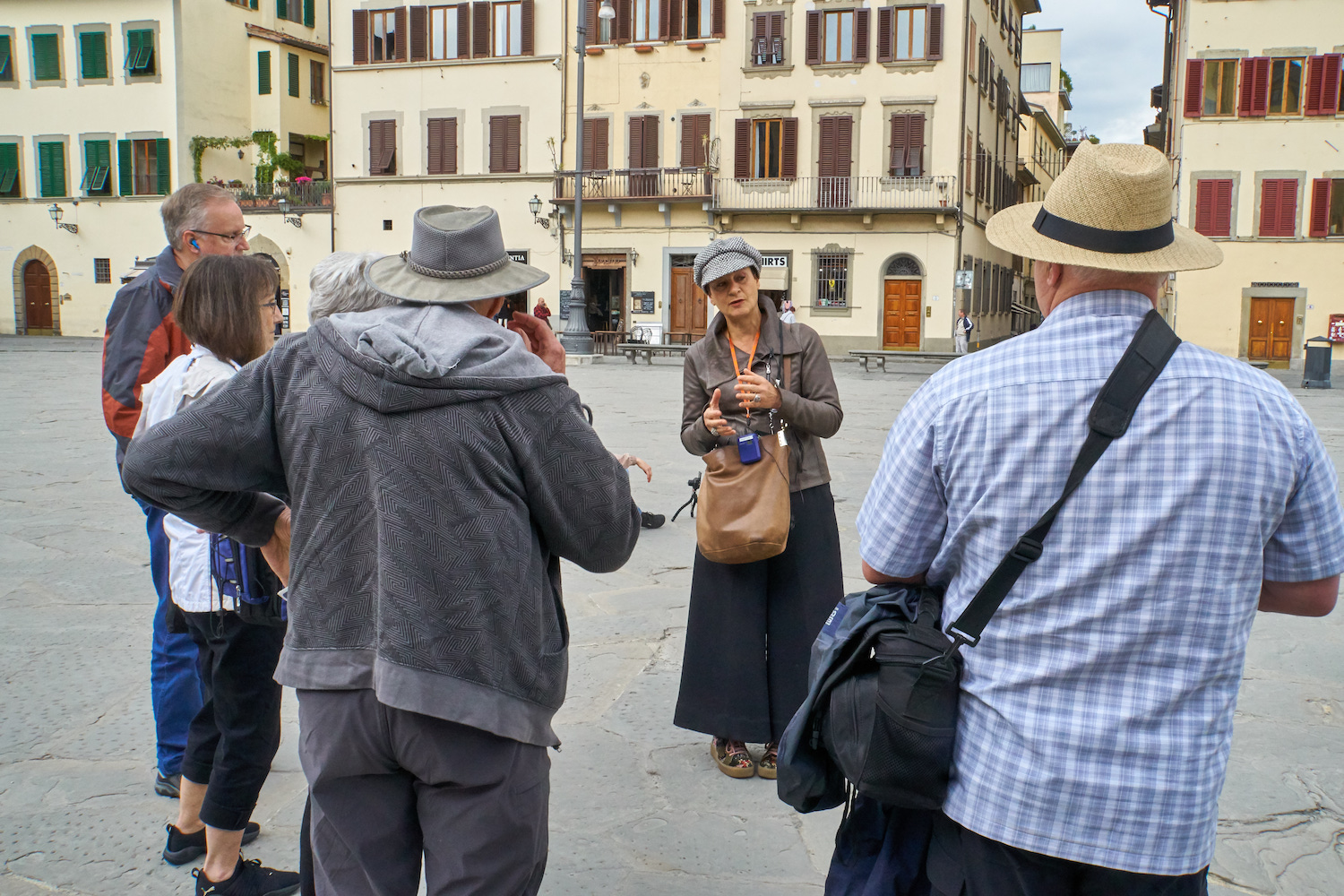 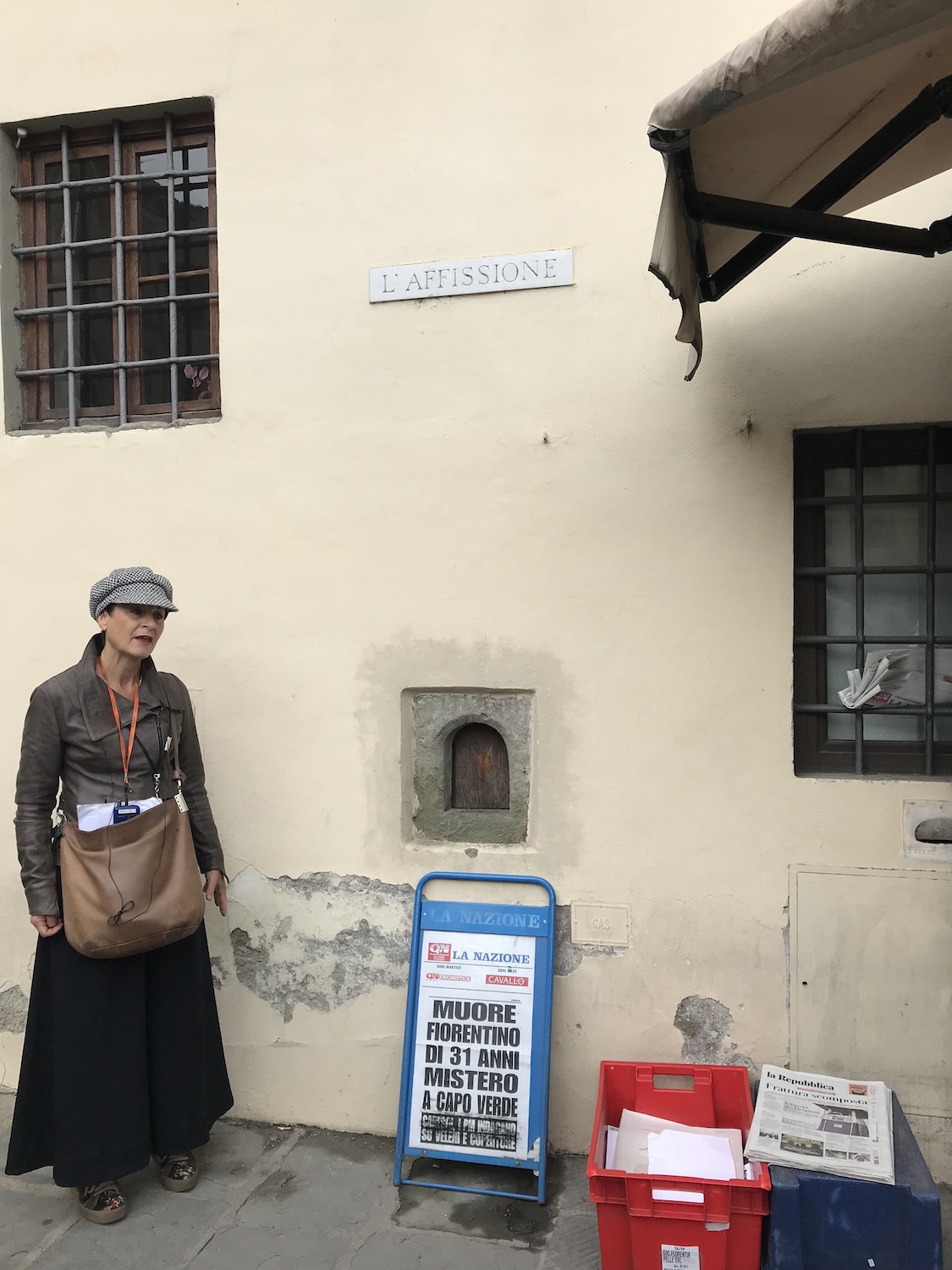 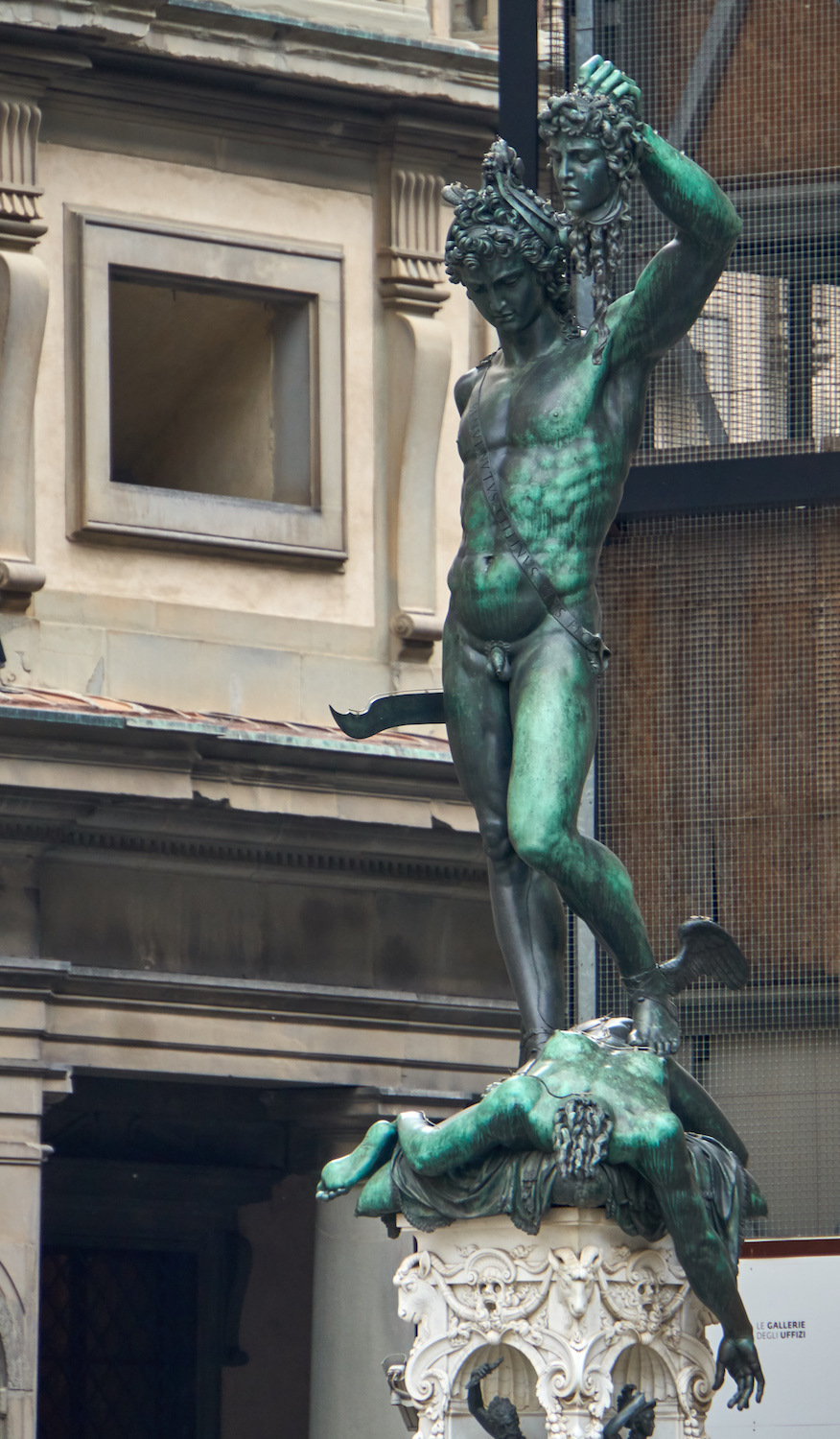 After that we walked through the most popular areas of the city, along with all of the other tourists. There is so much to see, and so much history, and so much architecture; it is a bit overwhelming. Kate did a great job telling us all about things. She is very knowledgeable, and I loved her accent.

Here she is showing us a wine window. Back in the Middle Ages, if you came to town to get some wine, you’d knock on this window and someone would appear and hand you a bottle. We saw several of these throughout the city. 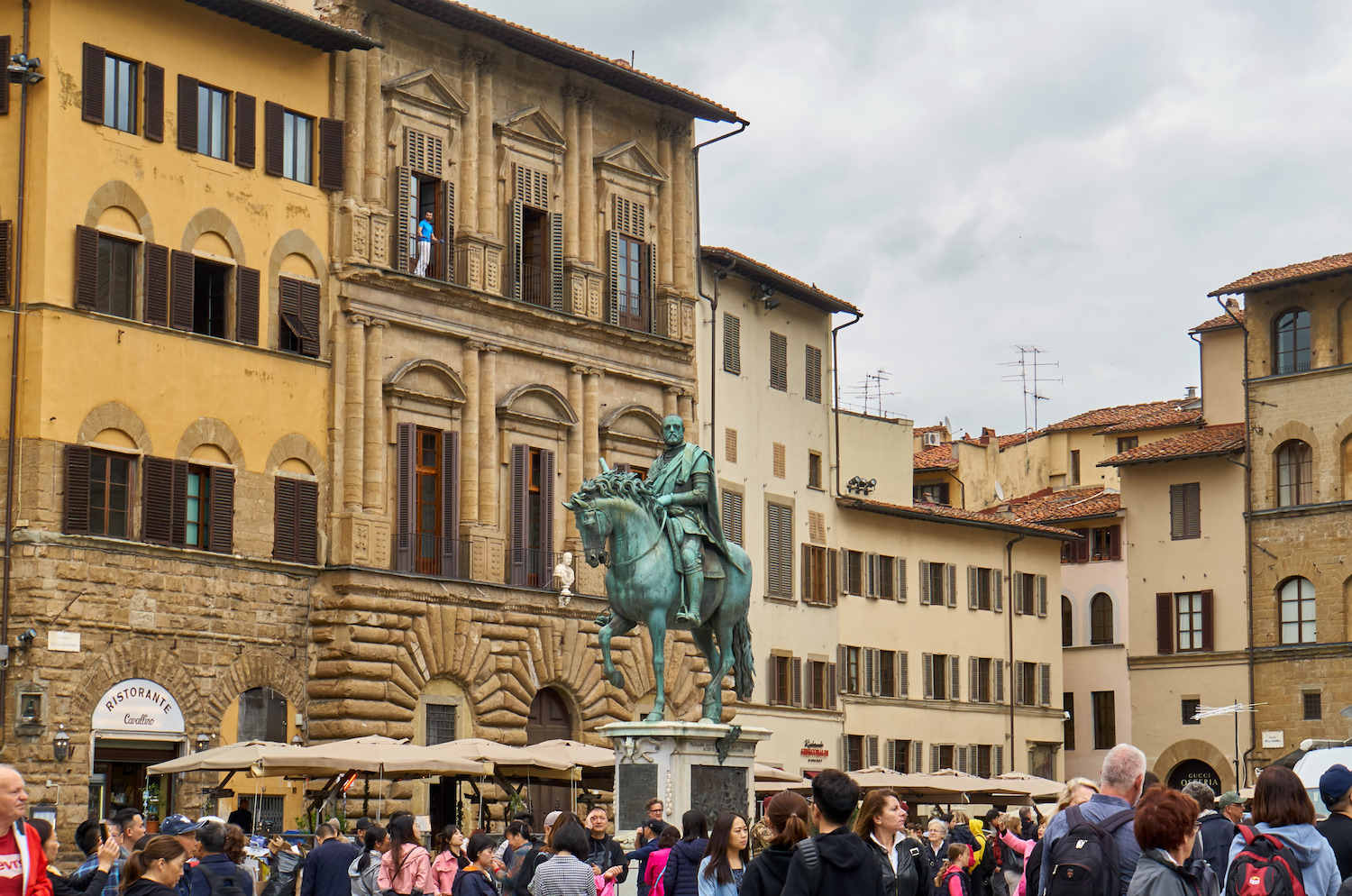 Centered in the photo above is a statue of Cosimo de Medici, head of the family that ruled Florence (and much of Tuscany) in Renaissance times. His statue is in the Piazzo della Signoria, where also stands the Palazzo Vecchio, the seat of government for the city under the Medici family, and later under the republic. In front of the Palazzo there are maybe a dozen statues, of which this one on the left, by Donatello, is the most famous.

The statue shows Perseus (legendary handsome Greek mythology guy) with the head of Medusa (legendary ugly Greek mythology monster, whose gaze would turn you to stone). Perseus has just killed the monster, and is triumphantly displaying her head, so that he can win the cheers of the crowd.

Kate told us that Cosimo de Medici had this statue placed here to inform the Florentine people that he, like Perseus, was not someone with whom to be messed.

On the left, please join us now for a walk in the rain across the Ponte Vecchio, the oldest bridge in Florence. It’s lined with jewelry shops on both sides, mostly gold and of very high quality. 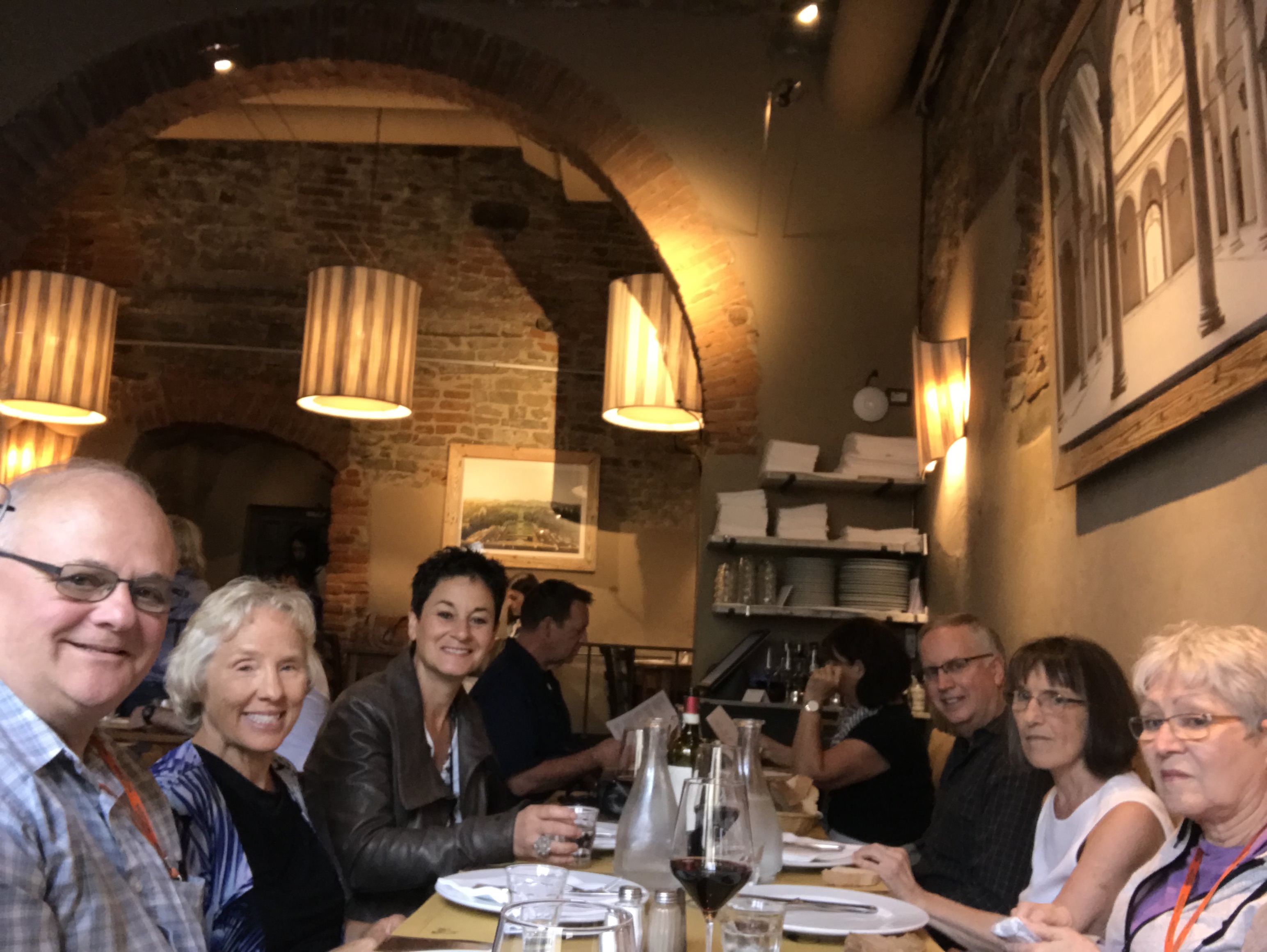 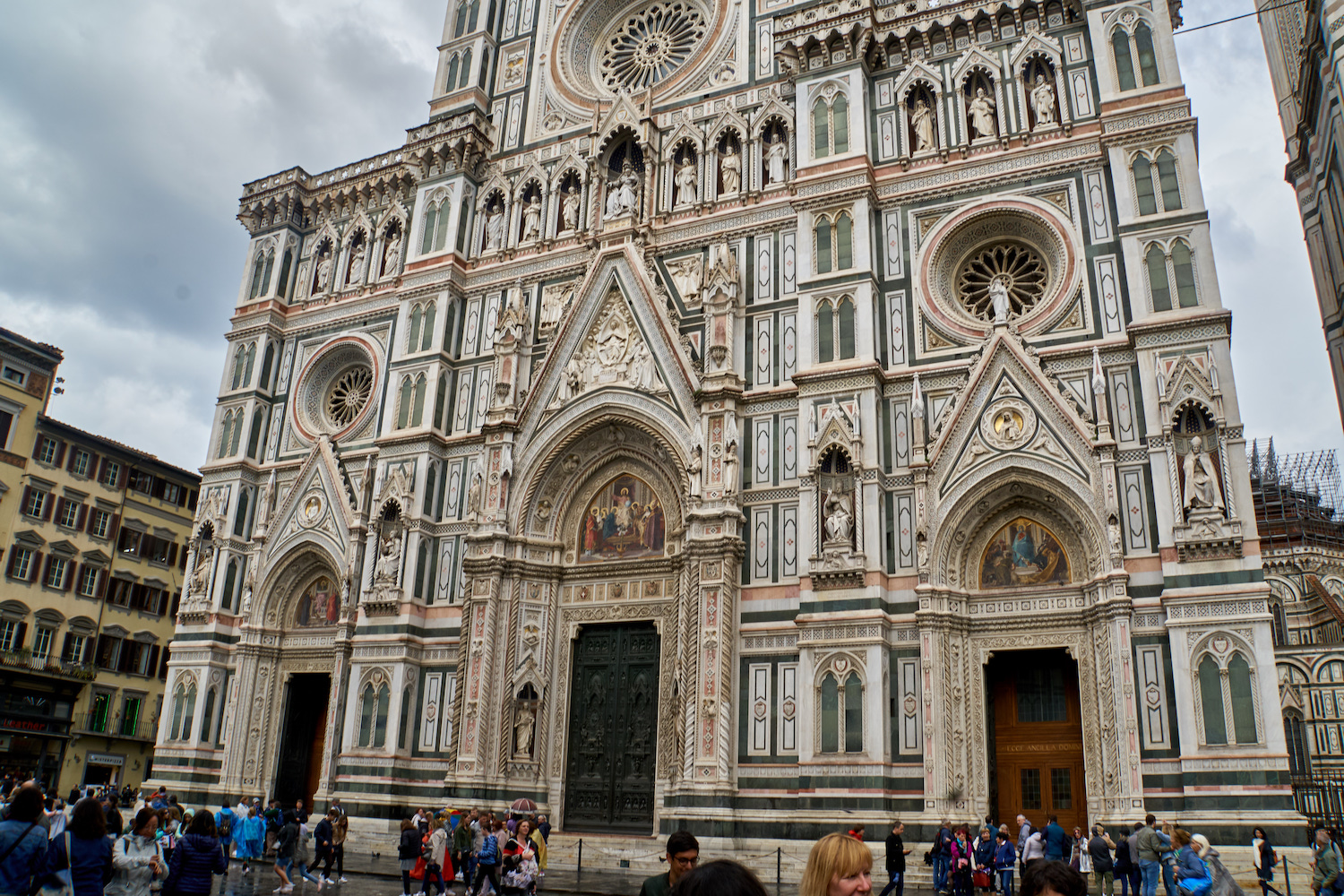 The most famous bulding in Florence is the cathedral (Duomo), and it is quite difficult to get a good photo of it. It’s too big. 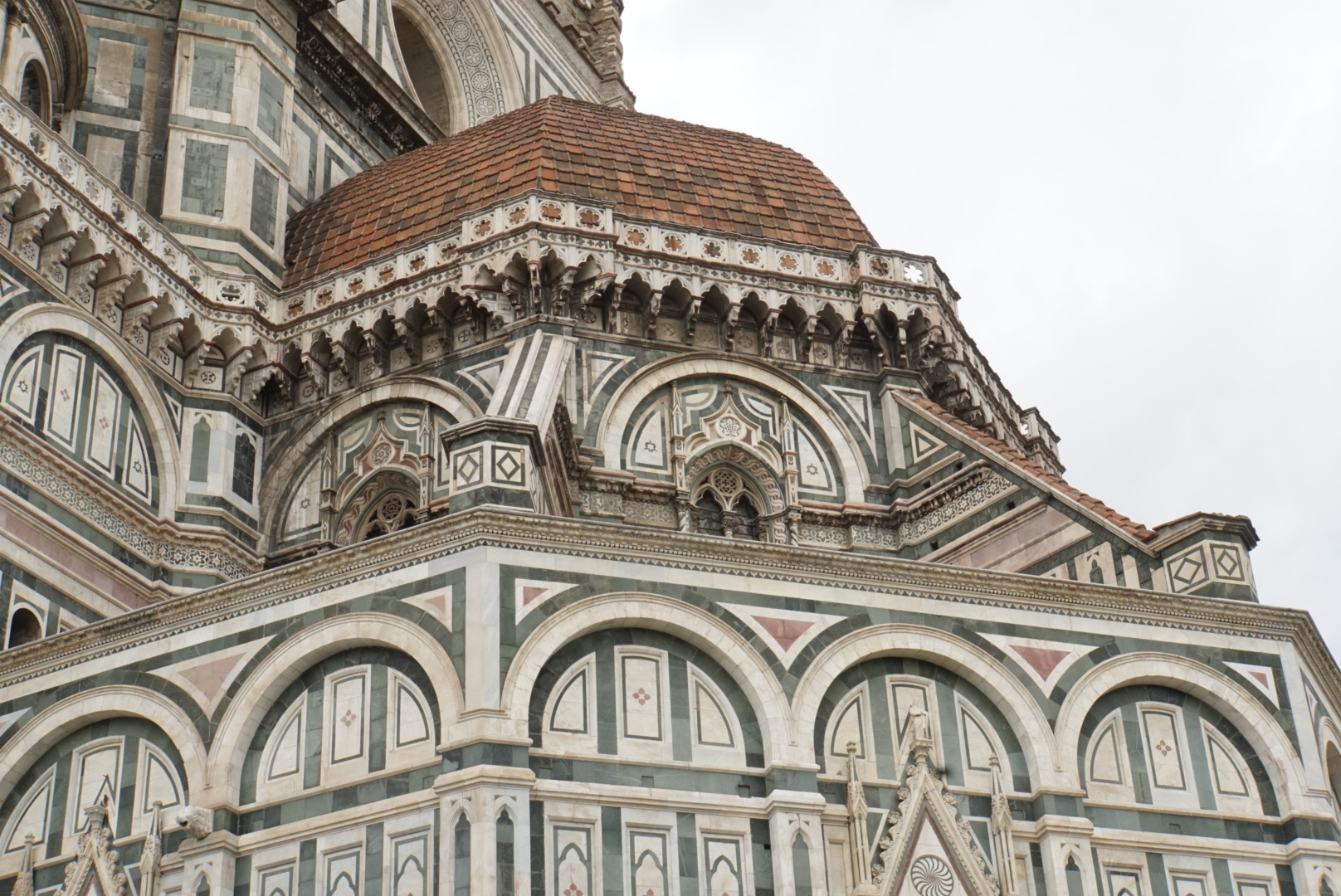 At left you can see us at lunch in this very old building with our guide Kate and the rest of the gang. As usual, it was a very good lunch. I think we’ve been to the best restaurant in each city. 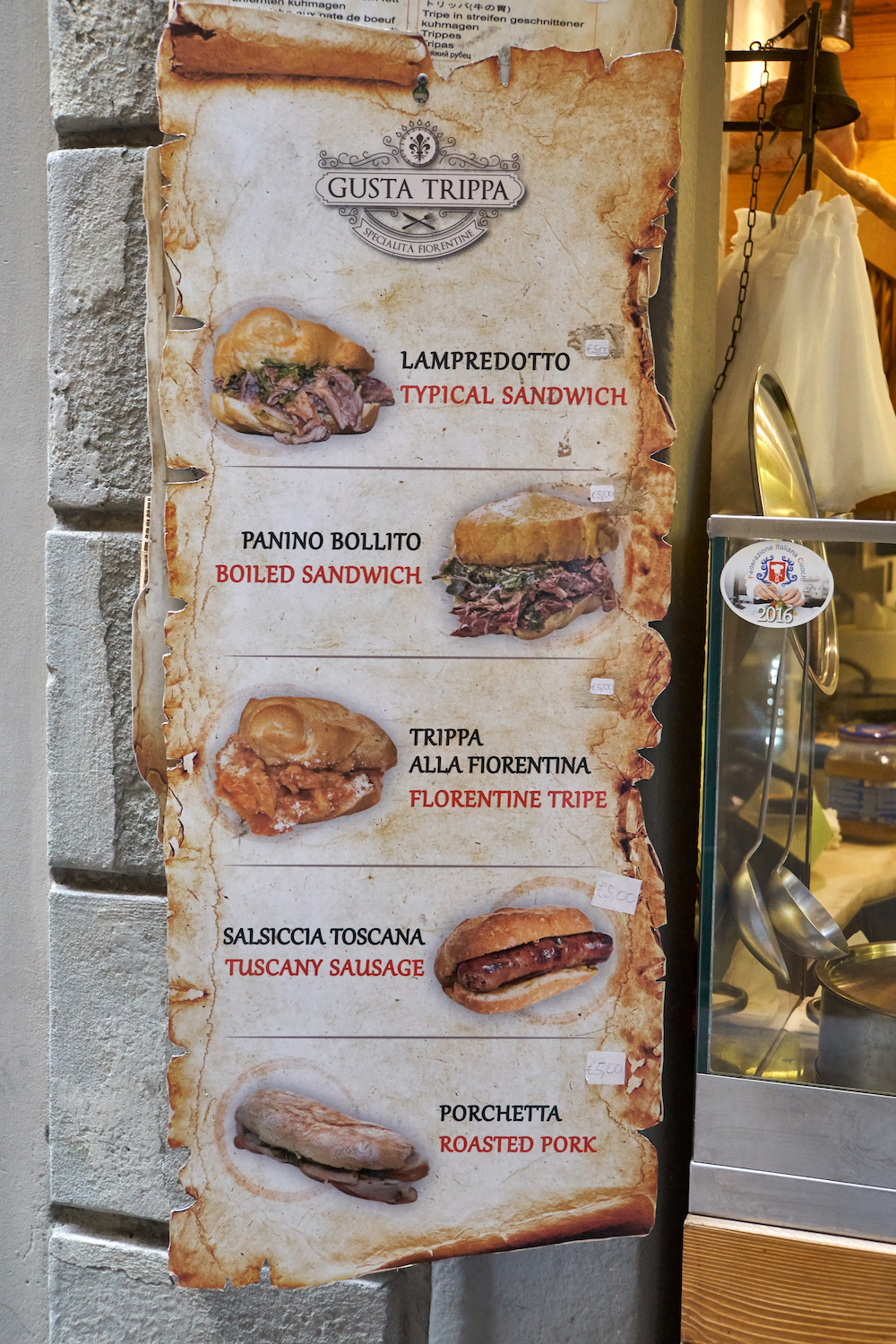 The typical street food in Florence is tripe, which you see above on the first three items of this food cart menu. None of us tried it, which may have had something to do with the fantastic lunch we’d just consumed.

I must indulge in one detail shot, just to show you the intricacy of the design of this building. This little porch was originally built to support Michelangelo’s David statue. David was intended to be one of sixteen similar statues on the Duomo. That’s why he is 17 feet tall, so people could see him up there.

When Michelangelo finished David, the people said “how are you going to get him up there?” Nobody knew how to do that, so David was placed in front of the Palazzo Vecchio for his first few hundred years. Now he’s in the Accademia museum.

We made our way to the Cathedral Museum, which has recently re-opened following a long closure for renovation. It’s a wonderful museum; most of its items on display were originally made for the cathedral or the baptistry, but are in the museum now for safekeeping.

The sculpture on the right used to hang in the baptistry. It shows the ascension of John the Baptist into heaven, surrounded by angels. 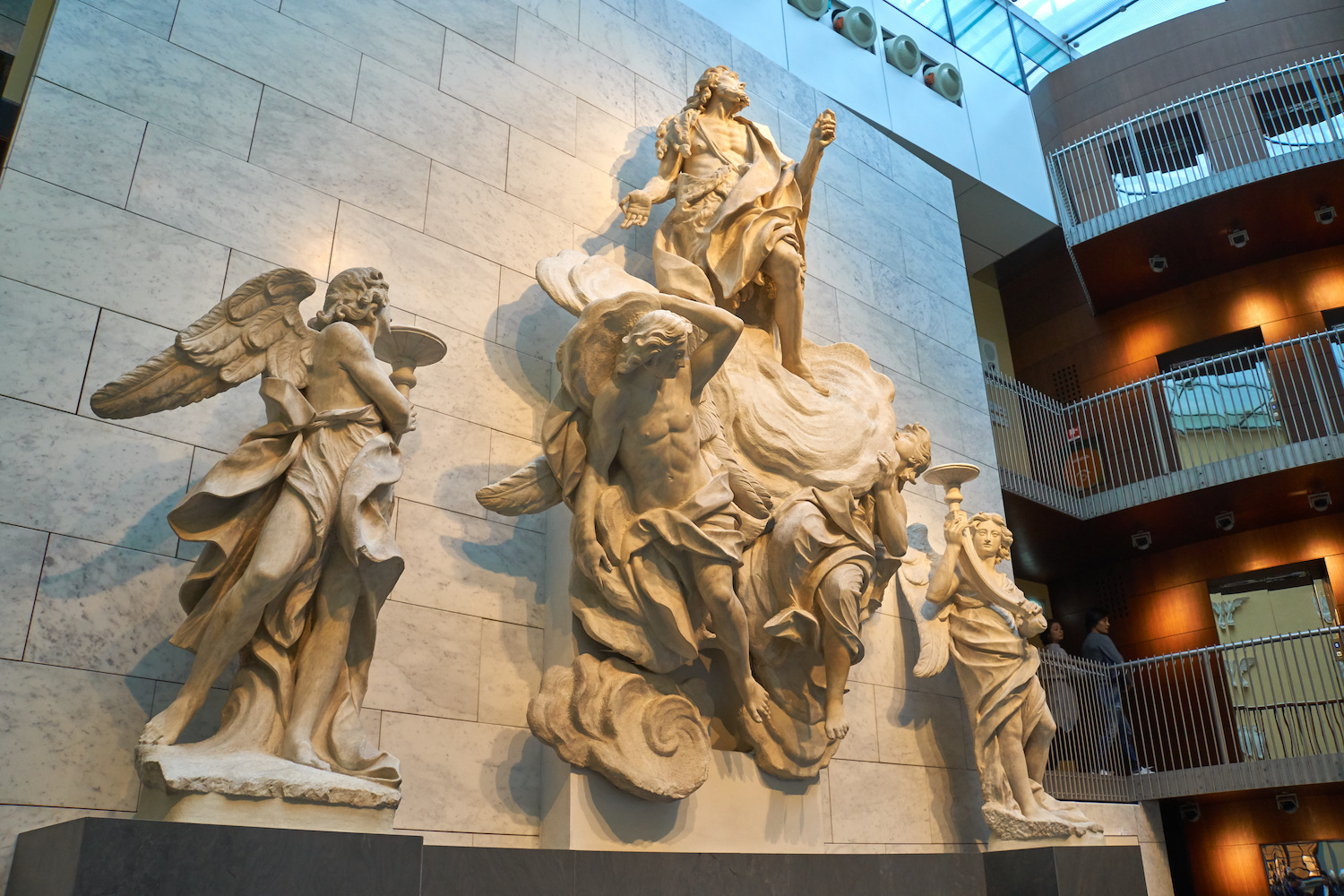 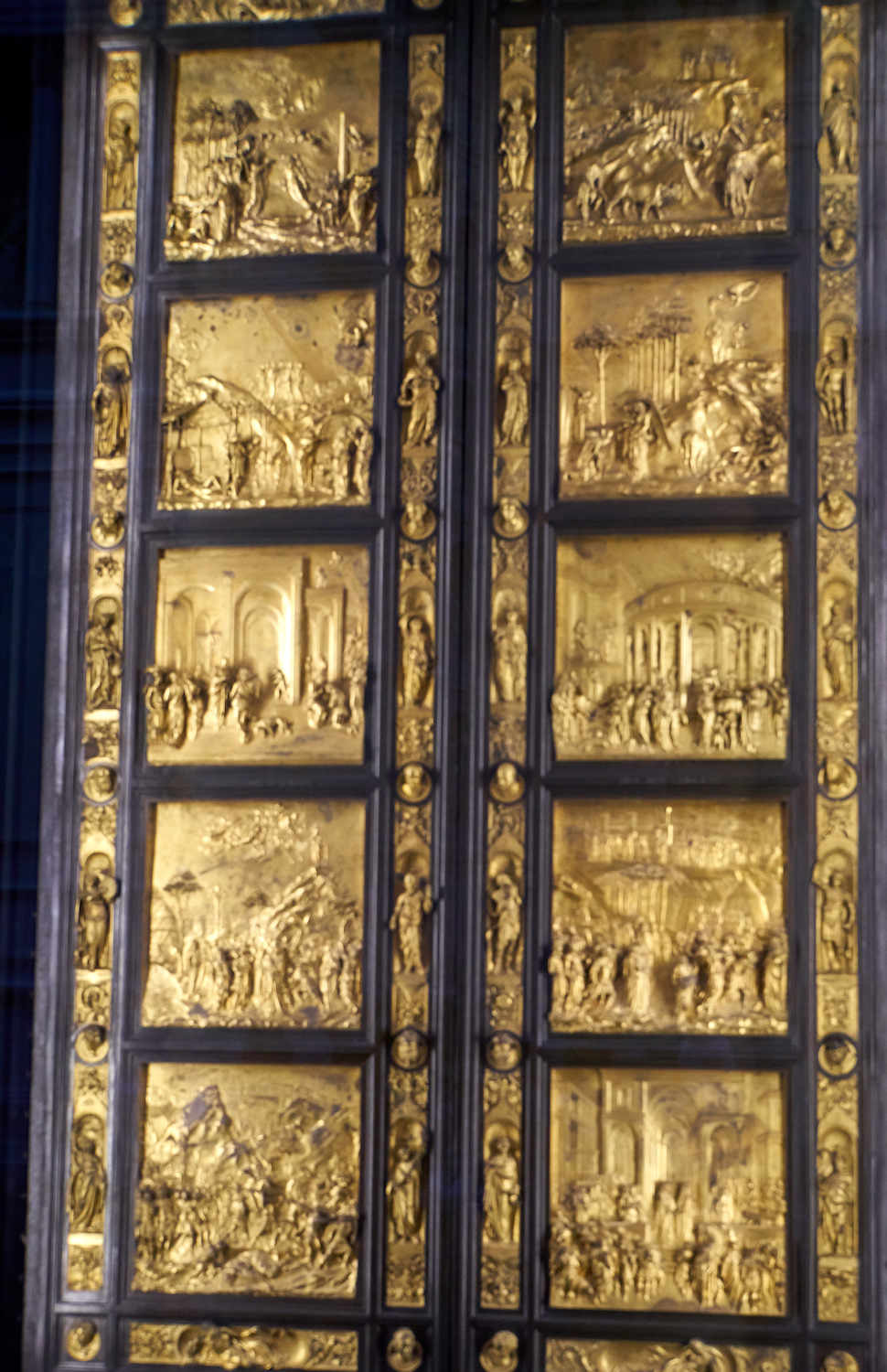 Behold the Gates of Paradise. They are cast in bronze, and were made by an artist named by Ghiberti for the baptistry in Florence. He was the winner of a competition to make them, beating out Brunelleschi (who made the dome on the cathedral). The scenes on the door depict Old Testament stories.

The doors are called Gates of Paradise because after you’ve been baptized in the baptistry you go out these doors directly to the cathedral (which they face) into the presence of God.

The doors are no longer on the baptistry; they’ve been replaced with copies. These are the originals, and they’re in the Cathedral Museum. They are probably the most famous artworks there.

Below are three of the panels – they’re worth a click to see the details. From left to right: Solomon determining the real mother of the baby, God handing down the 10 commandments to Moses, and David and Goliath. 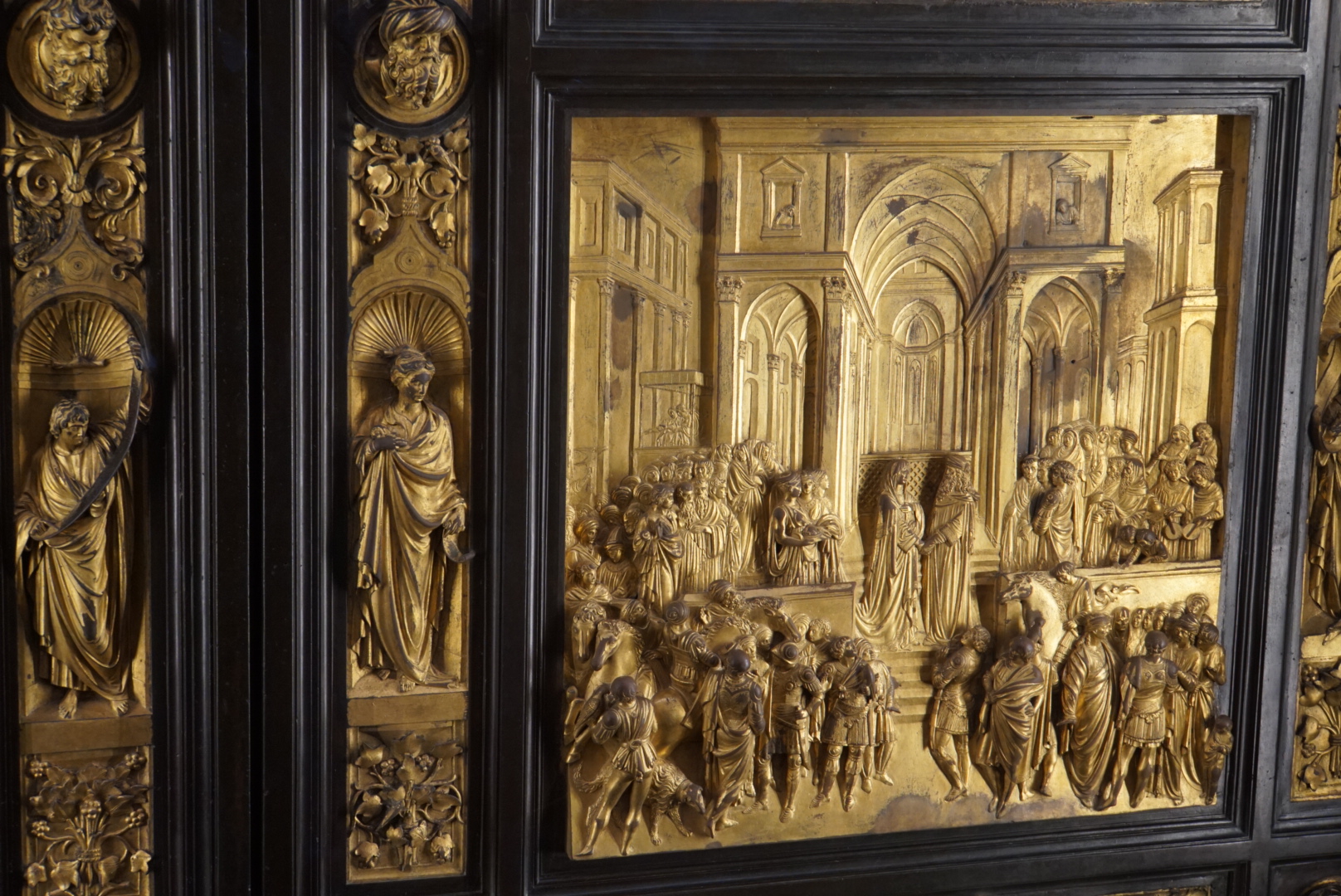 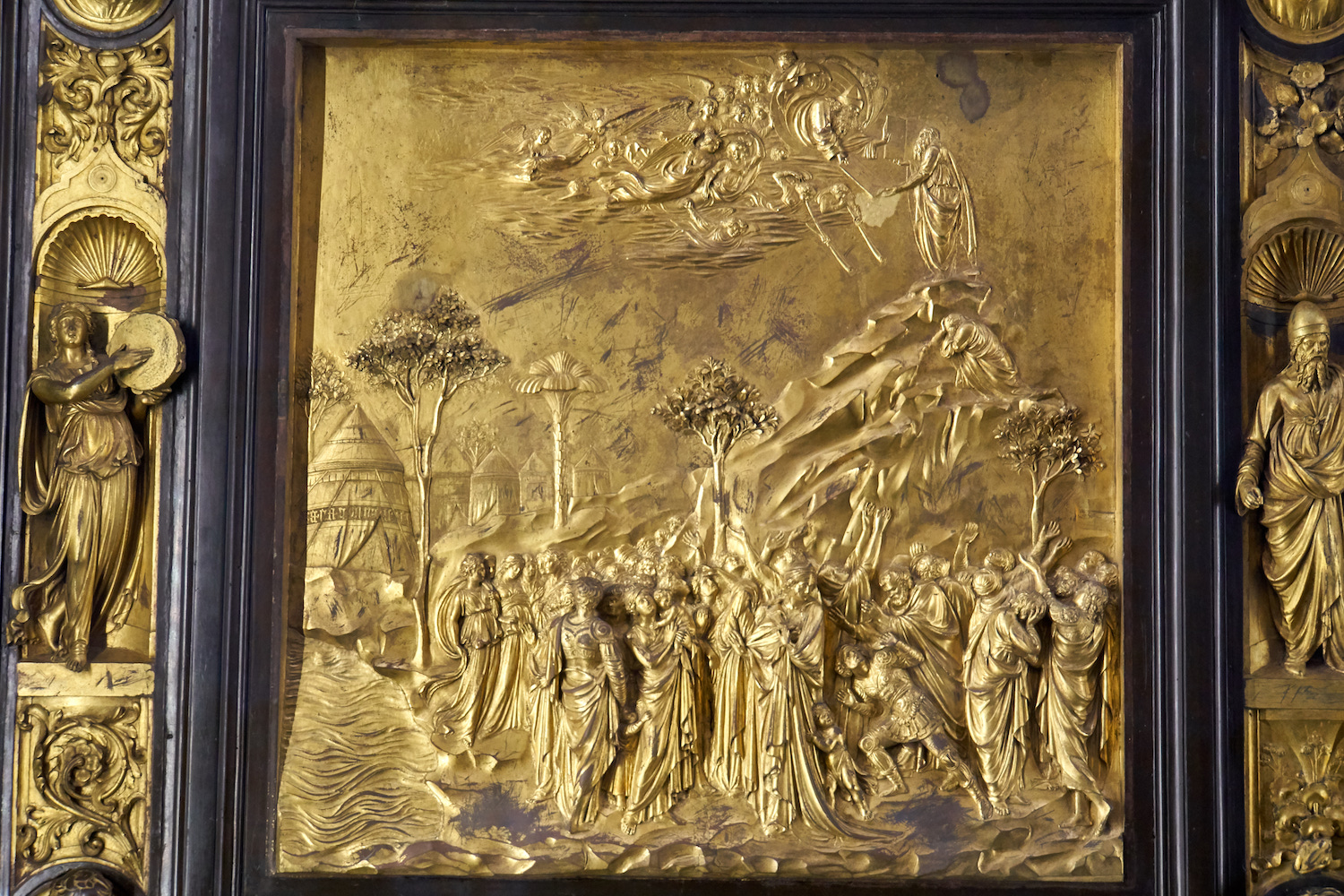 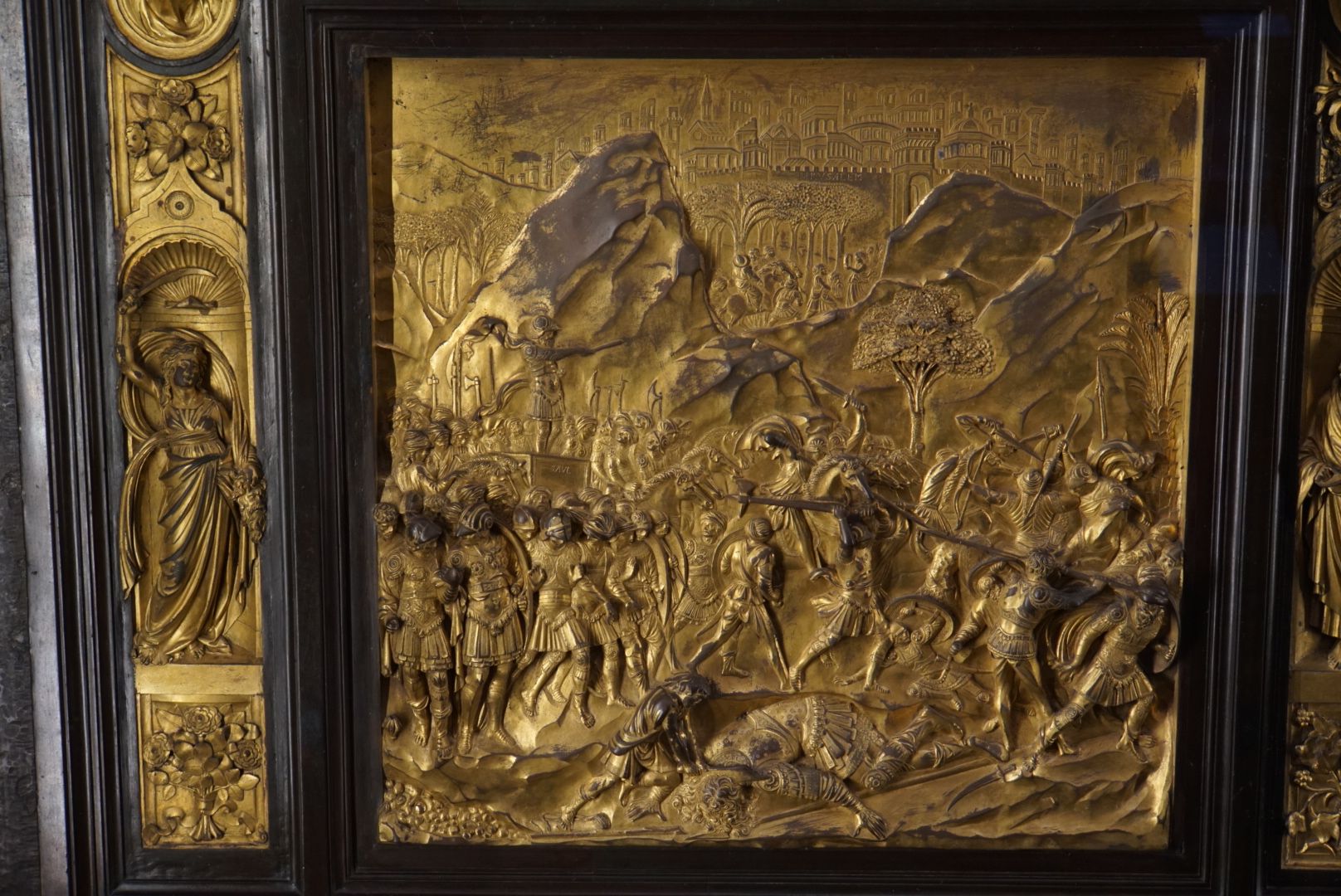 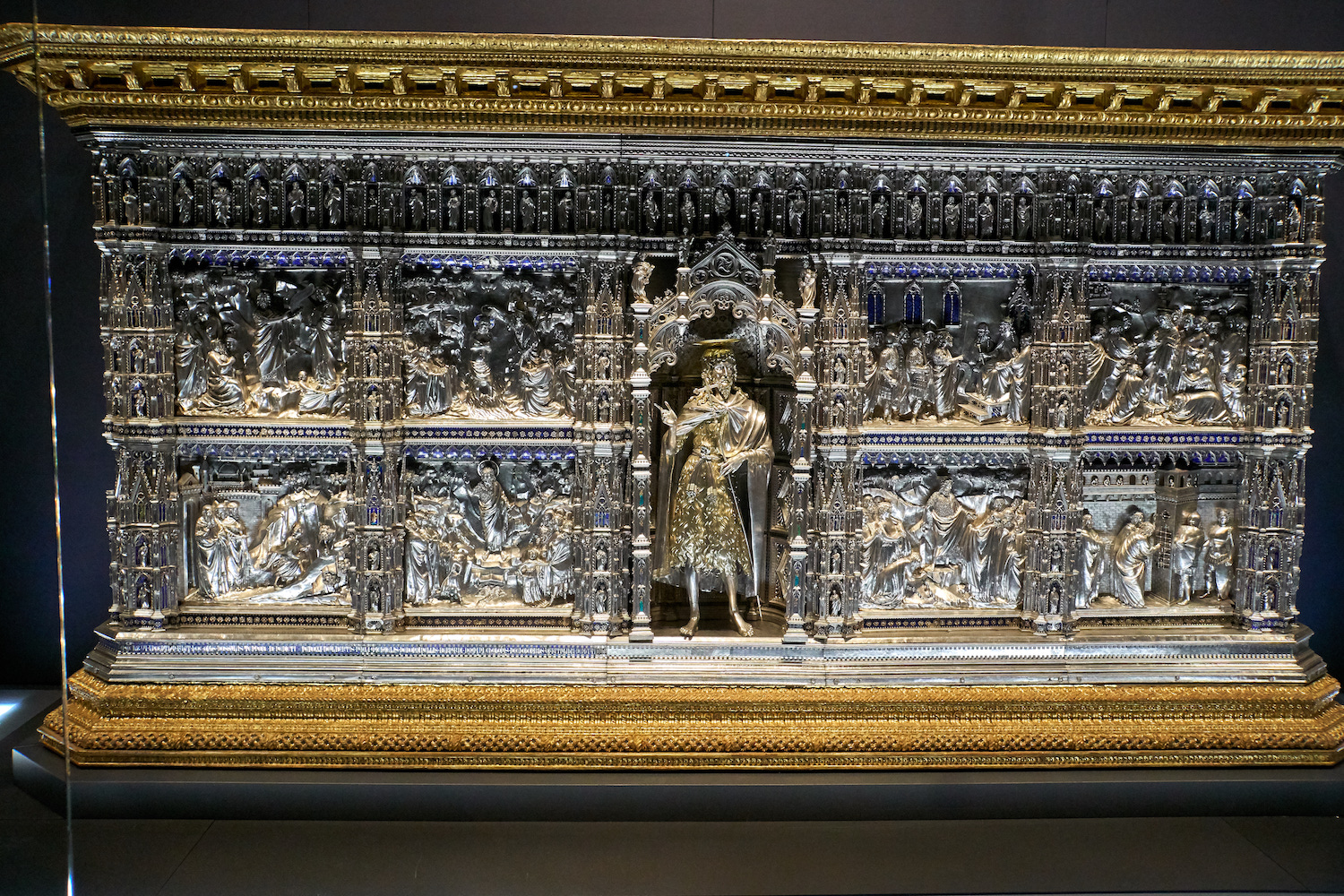 The altar of John the Baptist. This piece is about 10 feet long, all silver and gold, one of the most beautiful pieces of church art that I’ve ever seen. It was originally in the baptistry. 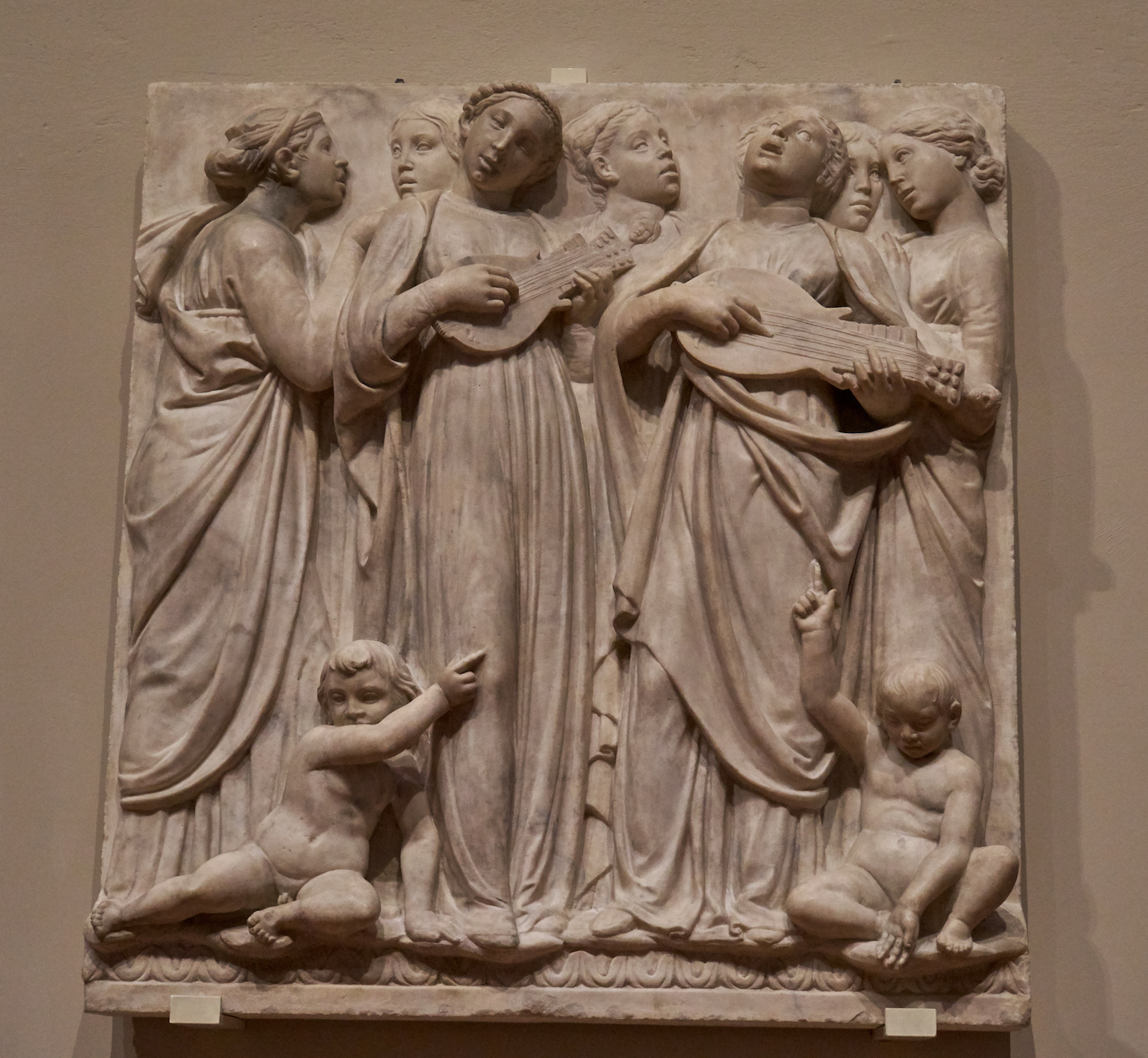 The relief sculpture on this plaque depicts a Renaissance-era worship band.

To the right, Donatello’s wooden carving of a penitent Mary Magdalene, mid-15th century. She’s over six feet tall. She’s portrayed as a penitent because the common understanding at the time was that she had been a prostitute whose soul Jesus saved. But the Gospel doesn’t actually say that. In any case, it’s a marvelous carving.

The next photo down on the right is the model of the dome that Brunelleschi made before beginning construction on the actual dome of the cathedral in Florence.

The story of how Brunelleschi won the contract for the dome goes like this:

The art of dome-building had been lost. The people of Florence were in despair; they had a cathedral without a dome.

Brunelleschi was a young architect who traveled to Rome for his training, and came back with some new ideas. Specifically, he had seen the Pantheon there, and he thought he could build a dome.

He went to the elders of the city and said, “I’ll build your dome.” They said how will you do it? He took an egg out of his pocket, set it on the table, and asked the elders to make it stand up. They couldn’t do it. So he smacked one end of the egg on the table, and it stood on end by itself.

“There’s your dome,” he said (or words to that effect). “But how are you going to do it?” they asked. “I’m not telling you that,” he said, knowing that if he answered, he would lose his commission to someone else.

That’s when he went home and built this model. 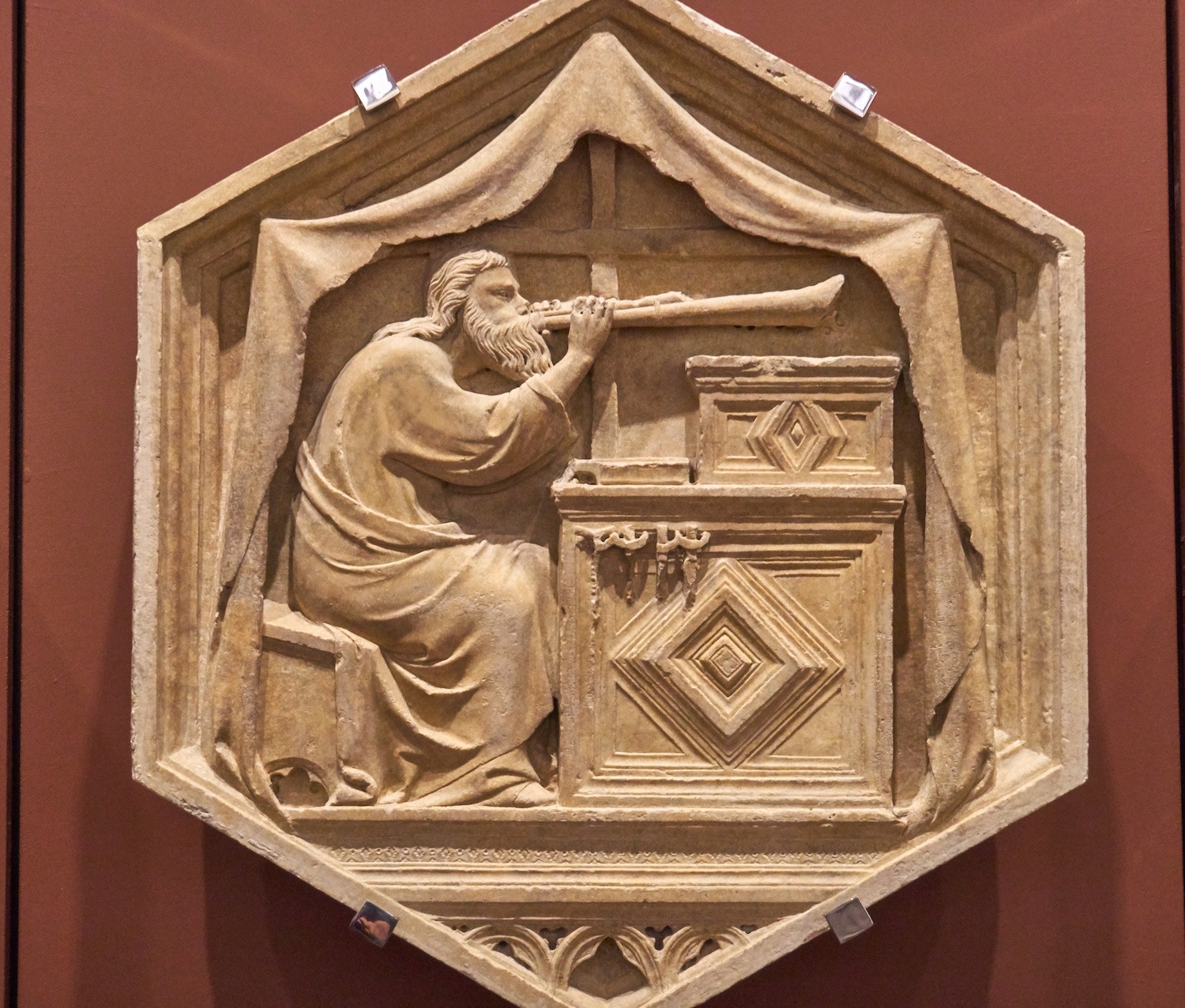 There is a complete set of these hexagonal tiles in the cathedral museum. They are from the baptistry, and have been replaced by copies. This one shows Jubal, from the book of Genesis. He was the first musician. 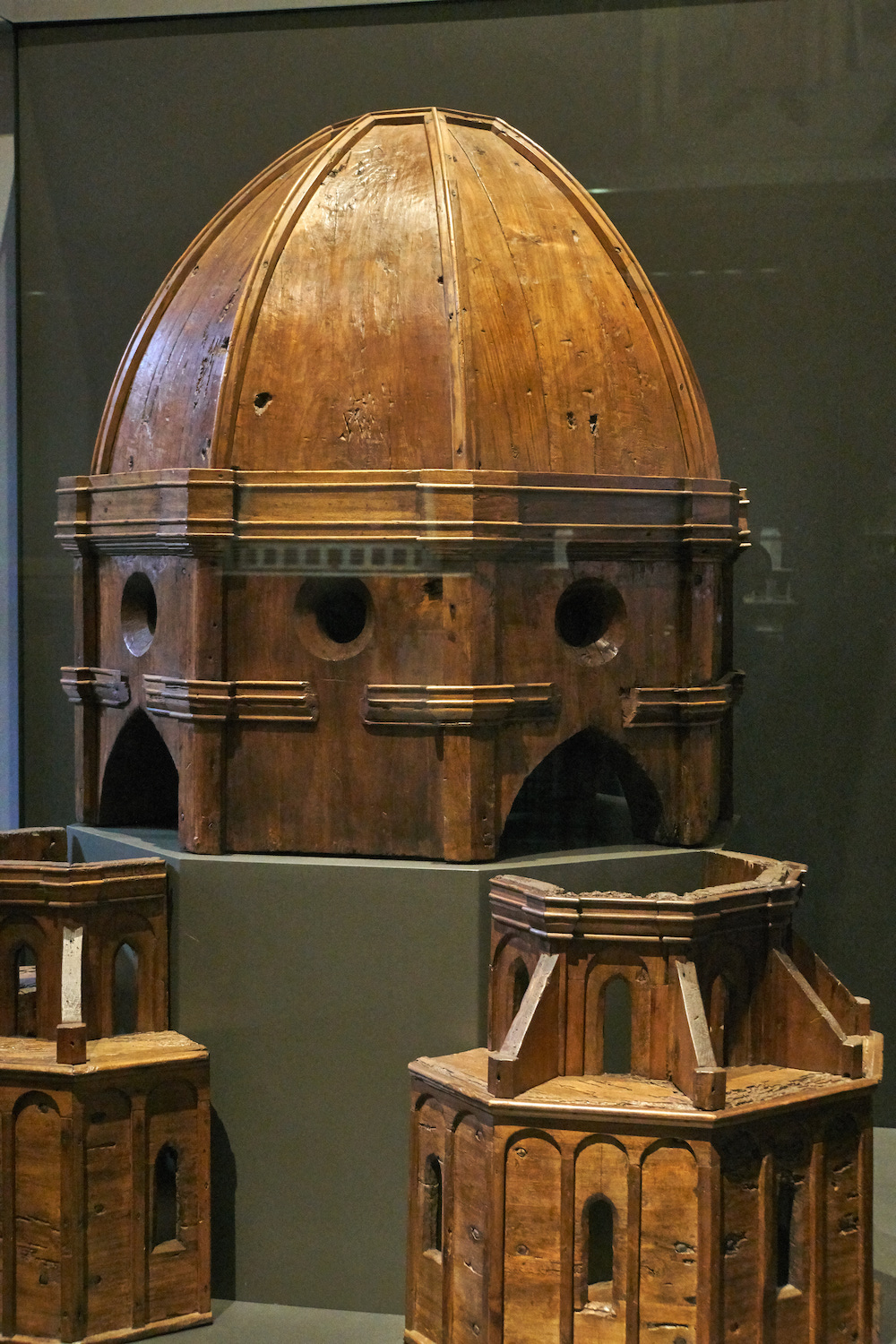 Our second major sight in Florence was the Pitti Palace. In 1549 it was purchased from the Pitti family by Cosimo Medici, whose wife didn’t want to live in the Palazzo Vecchio (too small). Of course she had to have this building enlarged significantly before it was acceptable.

The Pitti Palace is now an enormous art gallery, with five sections, each with hundreds of works. 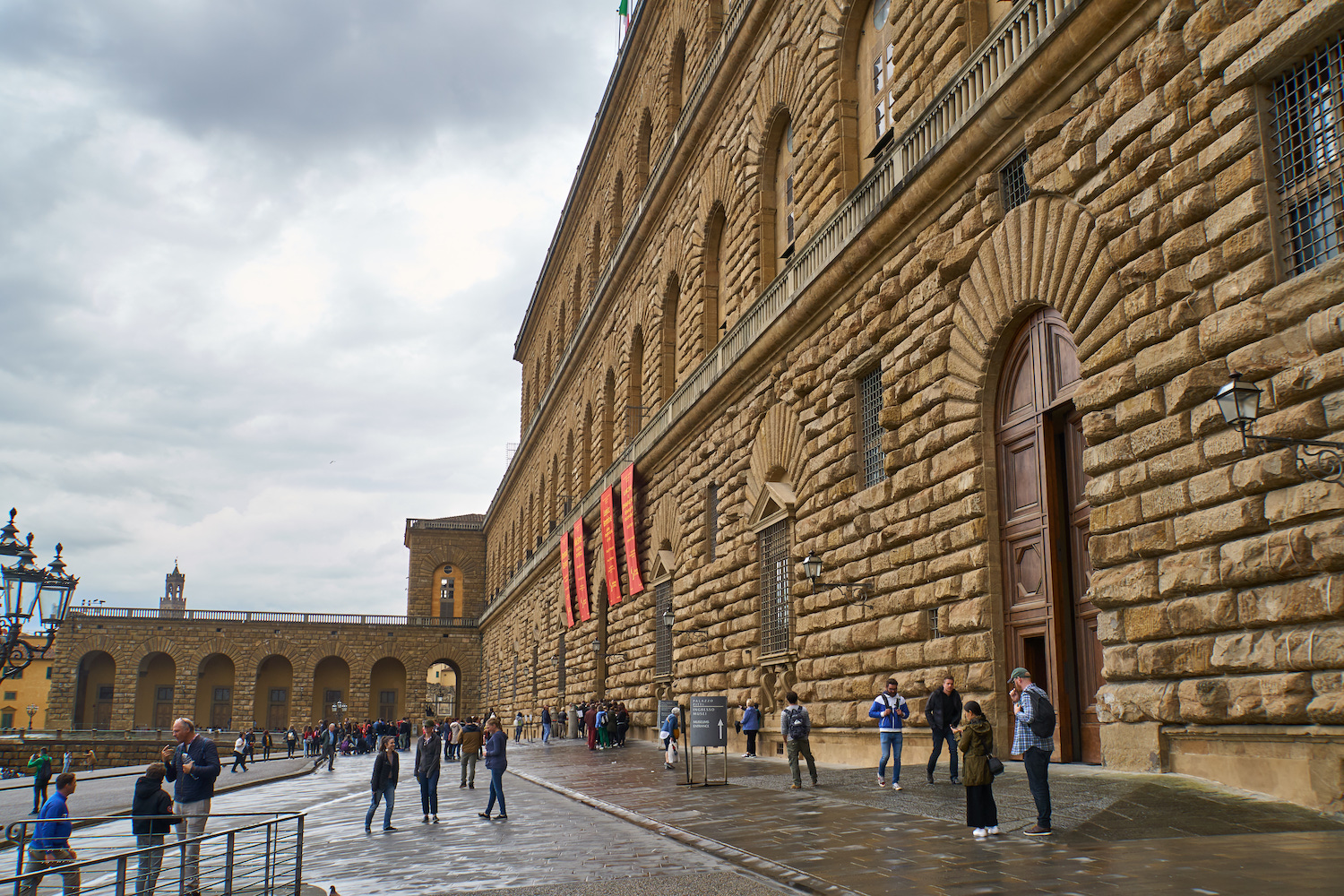 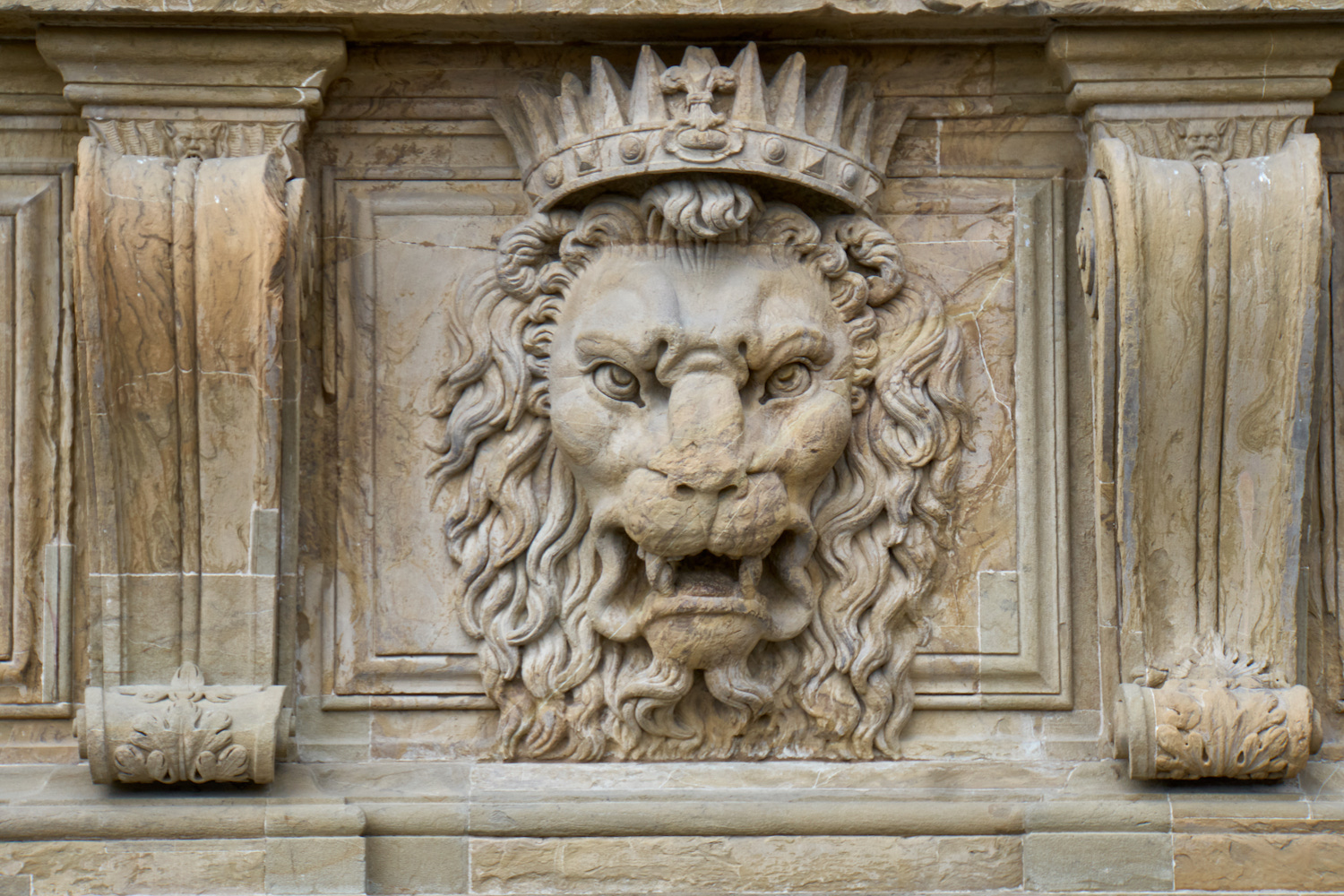 This insignia, which appears under several of the windows of the palace, tells you all that you really need to know about Cosimo de Medici and his family. 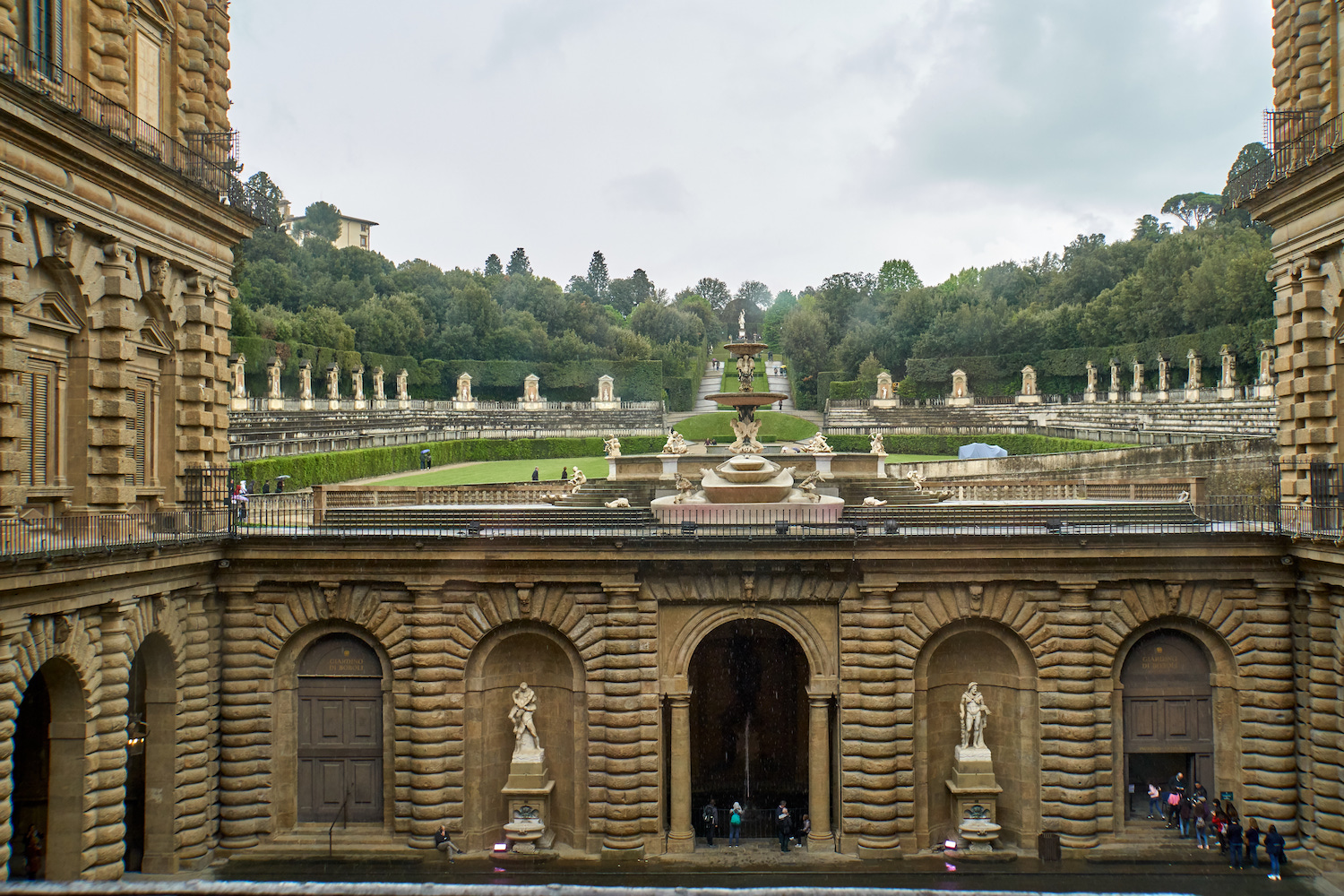 Here’s a view of the Boboli Gardens from a rear-facing window of the Pitti Palace. 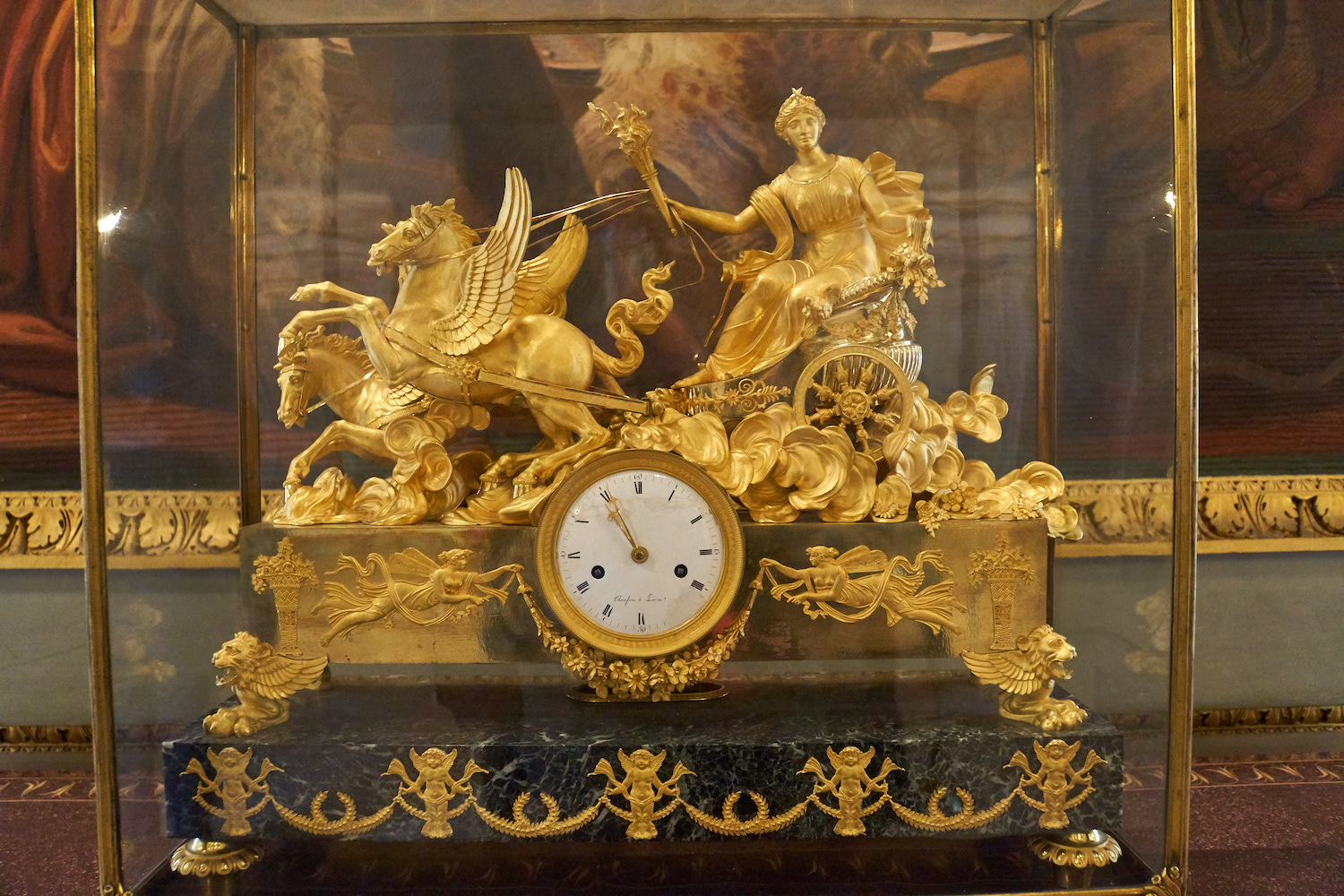 I don’t think that this clock is especially old, but it certainly is elegant. 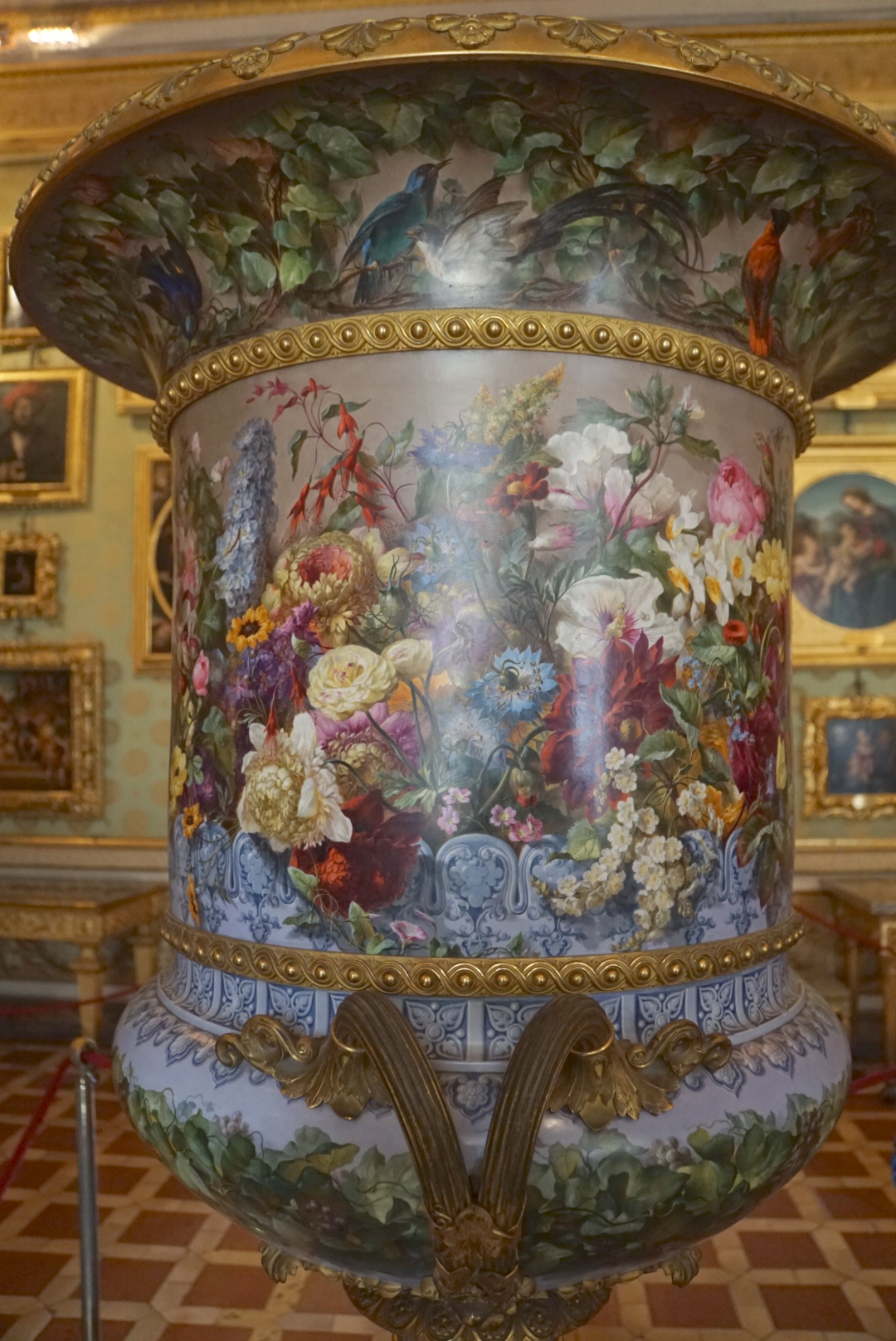 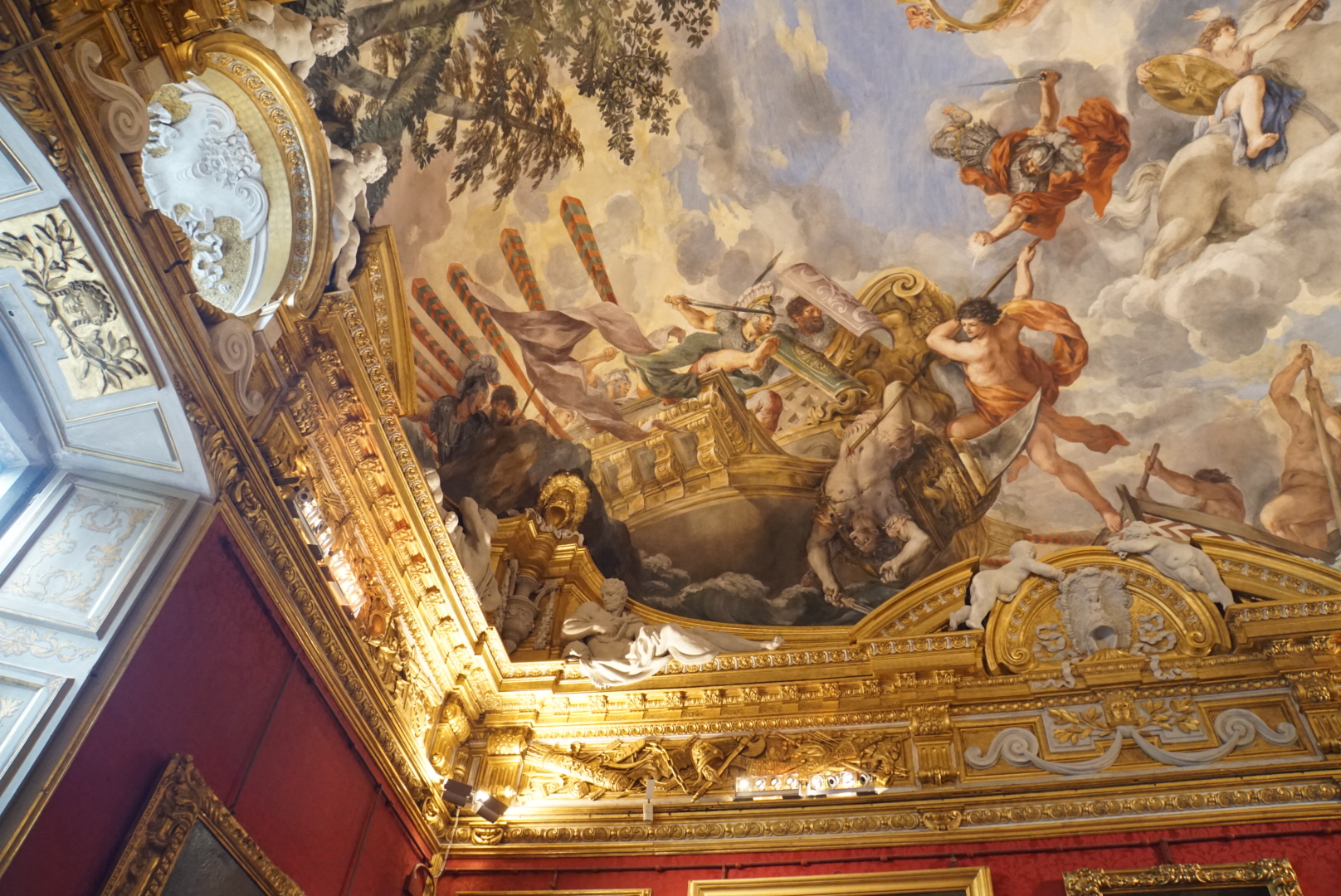 Above, a typical ceiling corner painting in the Pitti Palace: ornate, symbolic, complex.

Kate did a great job guiding us through these rooms, but there was too much to see. It was overwhelming.

Running low on energy, we weren’t able to see much of the Boboli Gardens, but what we did see was quite beautiful. Here’s a 360-degree view of the part of the Gardens that is directly behind the Pitti Palace.

Our original plan for the day was for some to visit the Accademia (to see Michelangelo’s David), and the rest to go shopping. But when we came out of the Gardens, the clouds gathered and the floodgates were opened. We had the downpour to end all downpours.

Kate knew that we all had tickets for the baptistry, although we had planned to skip it. But it wasn’t raining in there, so we all ducked in for a break from the weather. It turned out to be really interesting, and I’m glad we went.

Here is the ceiling of the baptistry. It tells the story of the world, going all through the Bible. To “read” it, you have to go around the whole from the top to bottom, finishing one whole row before moving down to the next. 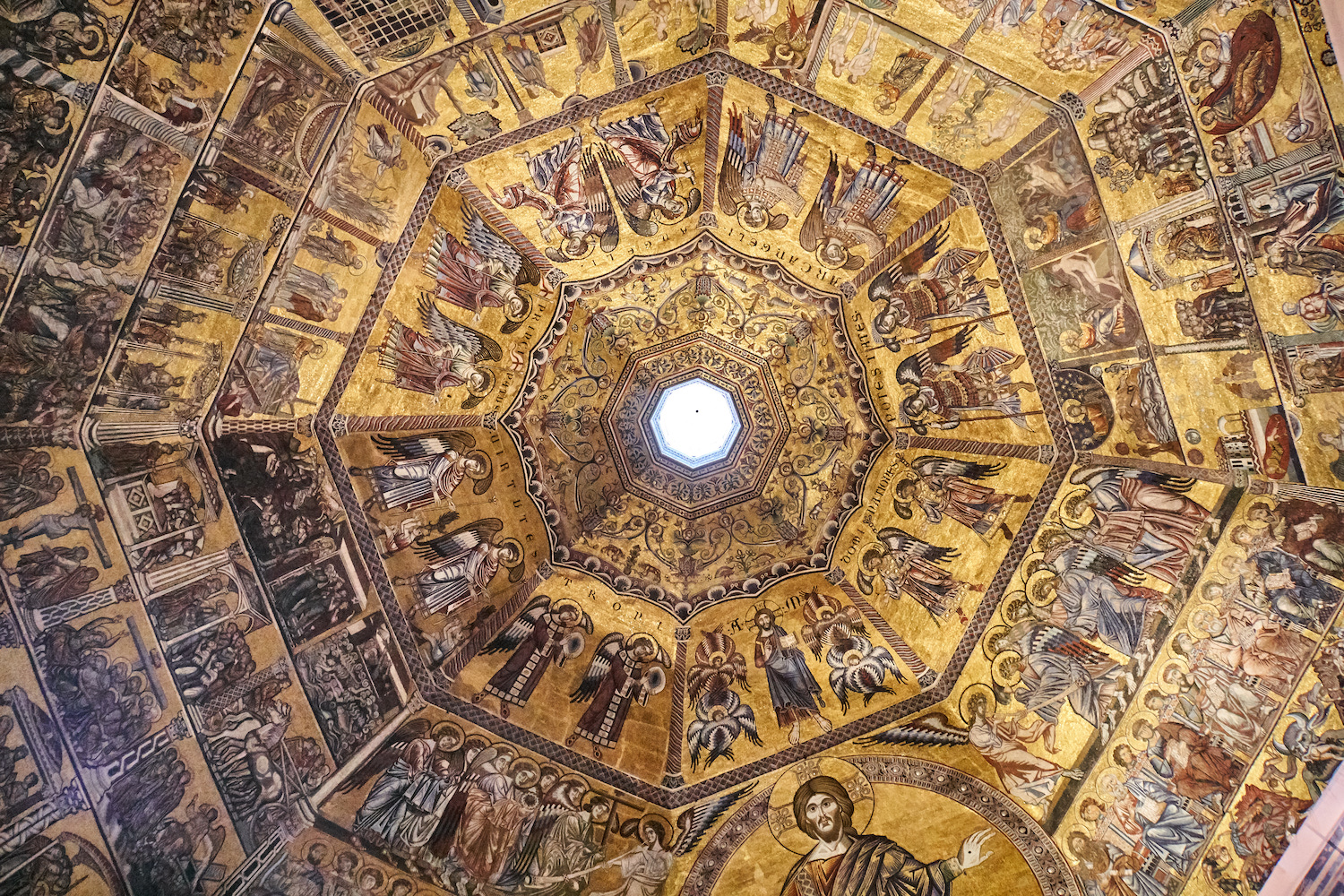 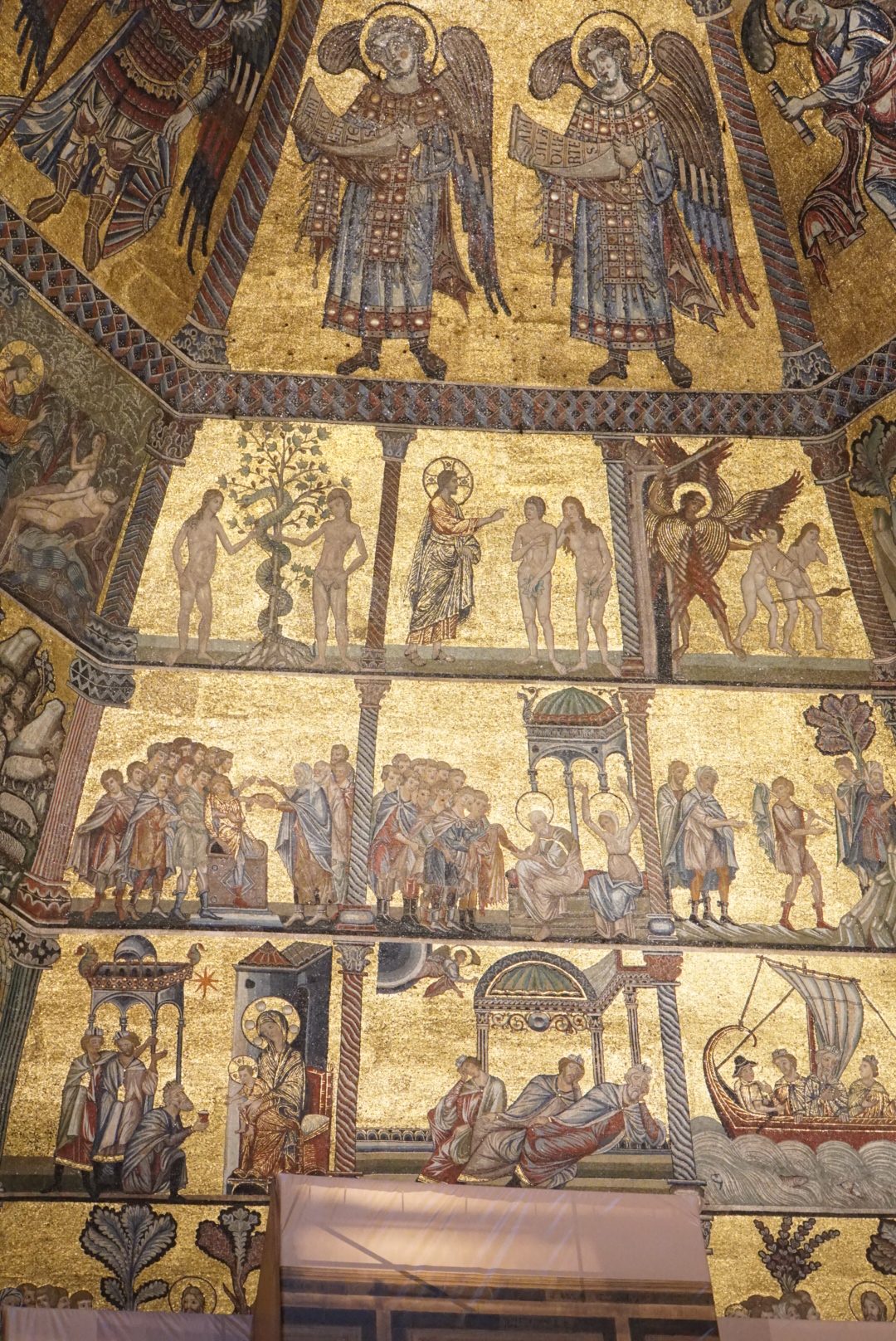 This is a part of the floor tile of the baptistry. The wavy lines are meant to remind worshipers of the water of baptism.

Here’s the detail from one panel of the ceiling of the baptistry. In this one (second row) you can see the story of the temptation of Adam and Eve, the encounter with God in the Garden, feeding of the 5000, and the man and woman being cast out of the garden as part of the punishment for sin.

On lower rows, it looks like stories from Jesus’ life; below that, later stories. 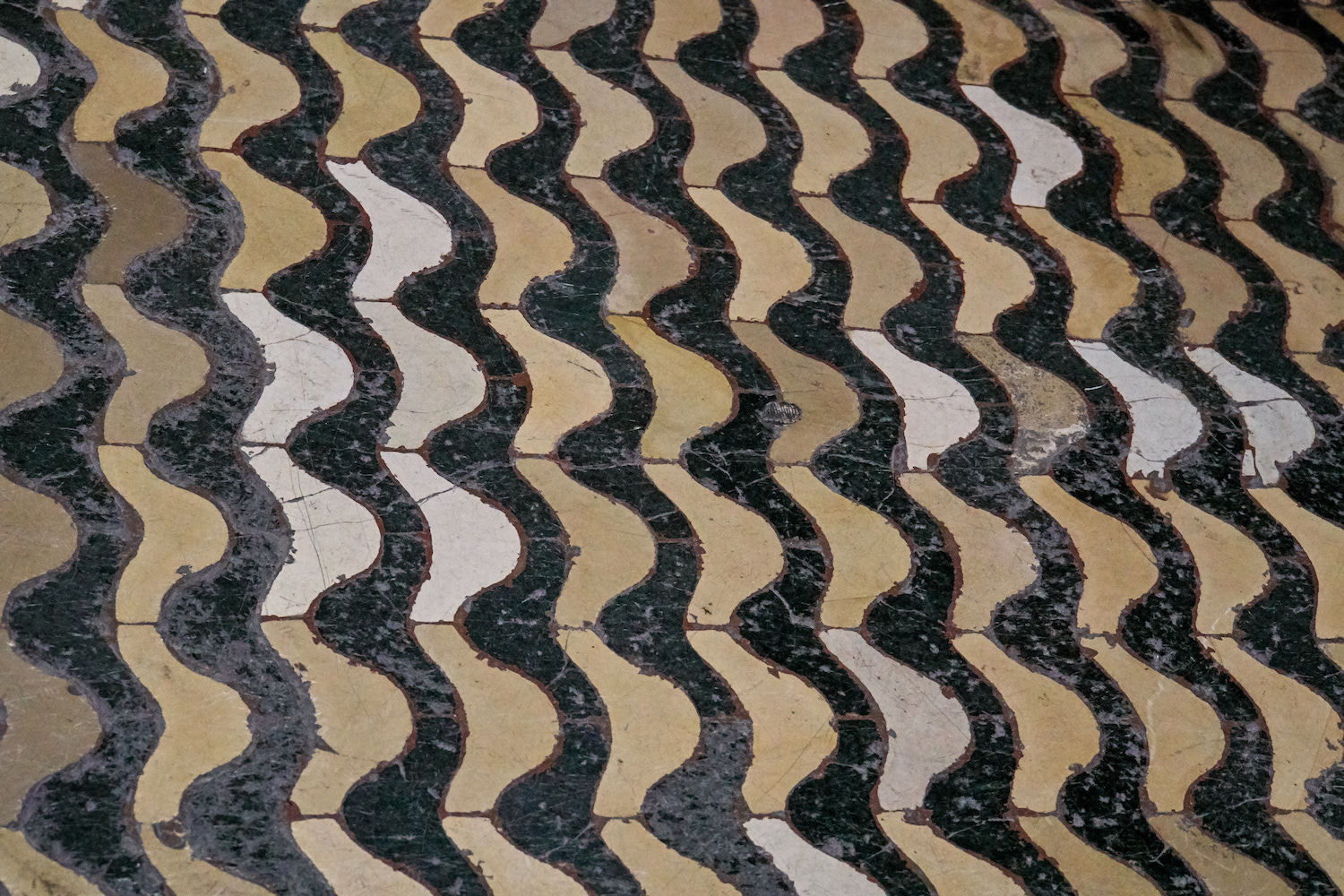 It turned out that nobody went to see Michelangelo’s David; some went shopping and the rest relaxed with a coffee. Next time!

I was a shopper, for once, and came out with a terrific leather jacket that I think will last longer than I will. It will become a family heirloom. Karen got a beautiful picture for our home in Salem.

Kate was a great help to us shoppers; she went back and forth, assisting with both purchases. In my case she even knew the shopkeeper, and because of that I got a big discount on my jacket.