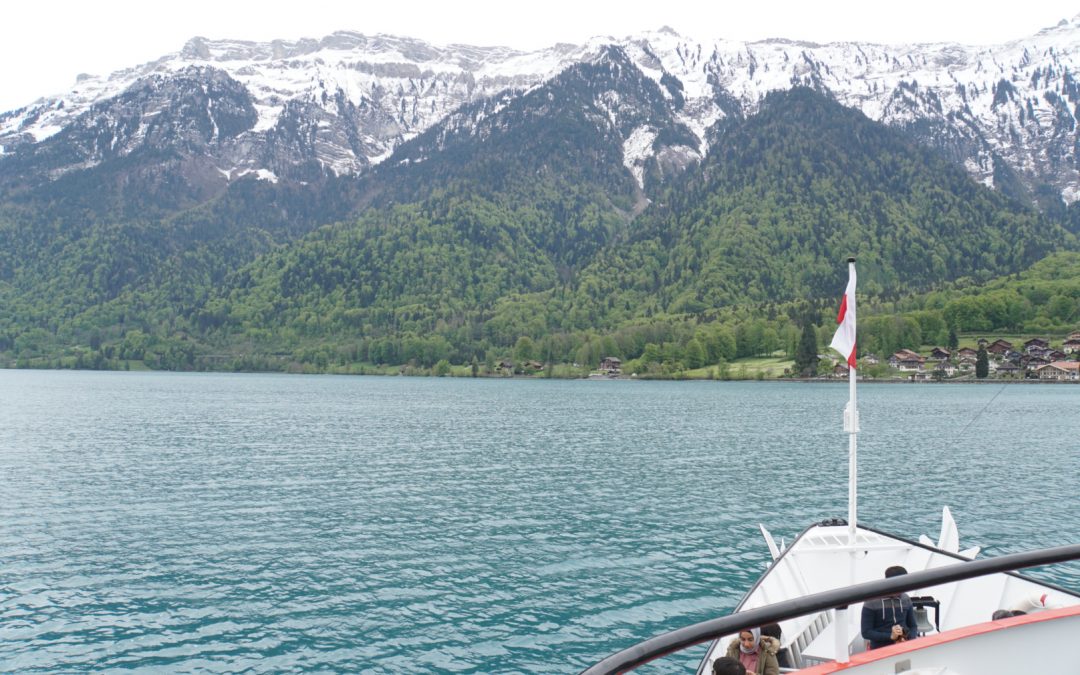 We had a beautiful cruise on Lake Brienz.

One great thing about being a tourist in Switzerland is the availability of transportation passes. The Swiss do a fantastic job of moving you from one place to another, and they have some excellent deals to help you afford it. Our group has purchased the Berner Oberland Regional Pass, which pays for transportation on trains, buses, boats, and gondolas in the region (Berner Oberland) that we’re visiting. Using the pass is simple. We get on the train, they come by, we show the pass, they say “thank you” and walk on.

Today we decided to use our passes for a boat cruise on Lake Brienz, or the Brienzersee (as they call it). Brienz is one of the lakes that Interlaken is named for, and the boat dock is right by the train station.

It’s pretty easy to find. You go out the back of the train station, cross the street on the wavy blue lines, and follow the yellow man toward the boat signs. 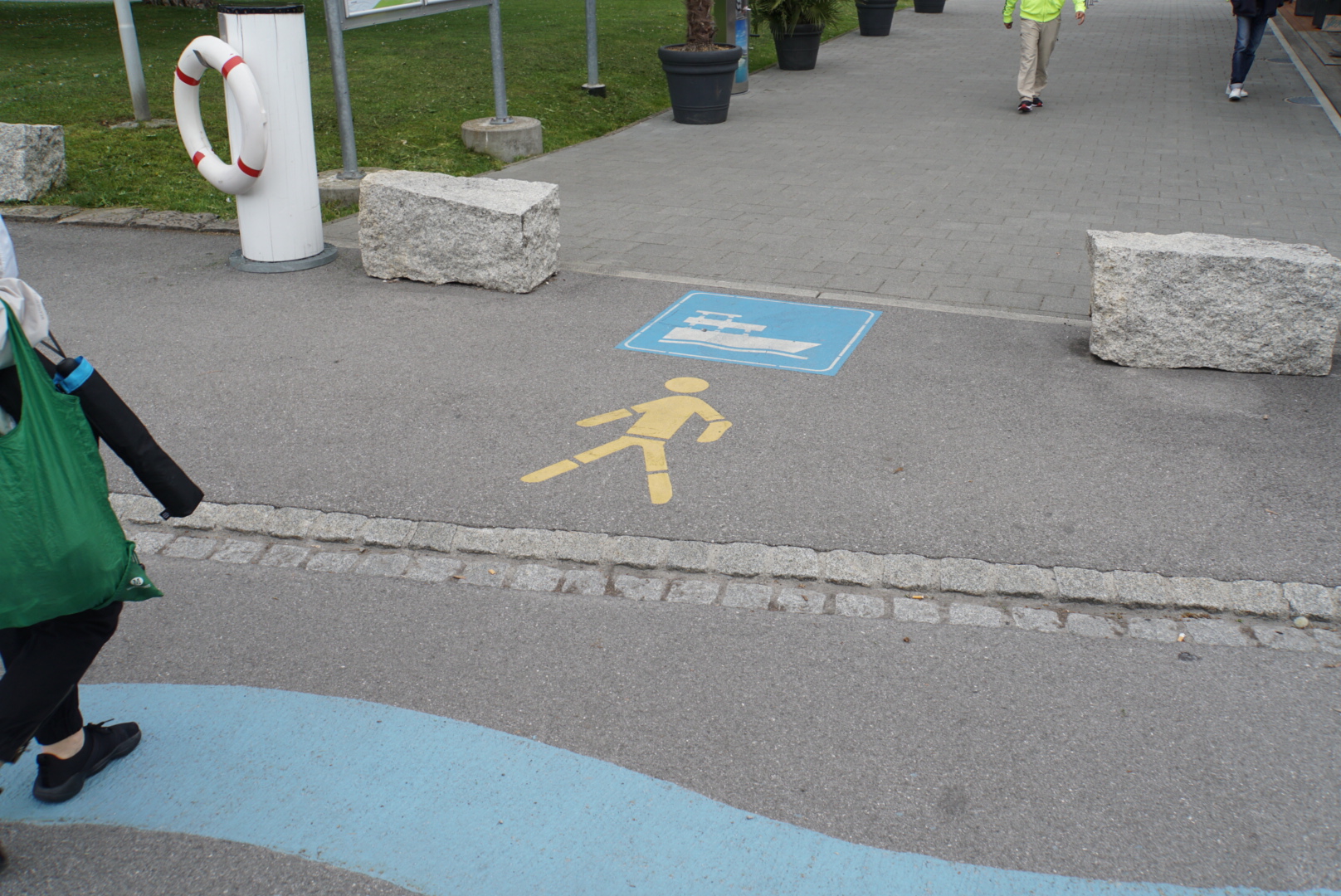 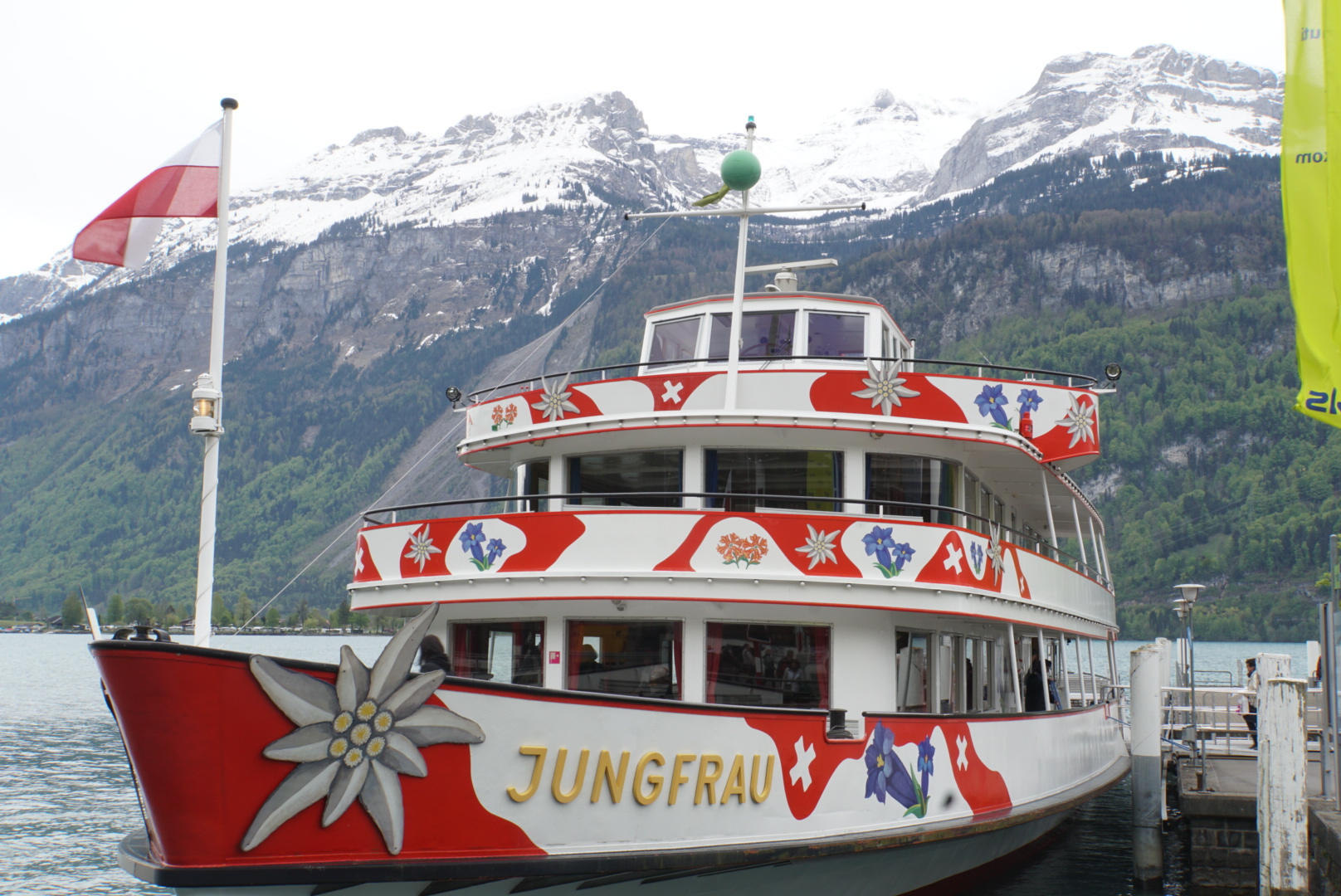 Our boat, the Jungfrau, docks at the port in the town of Brienz.

Our passes entitle us to second-class travel, but today we were feeling a bit uppity so we purchased 1st class upgrade tickets for 10 francs each. That got us to the second deck of the boat, and it was well worth it to have better views and be in comfortable surroundings. 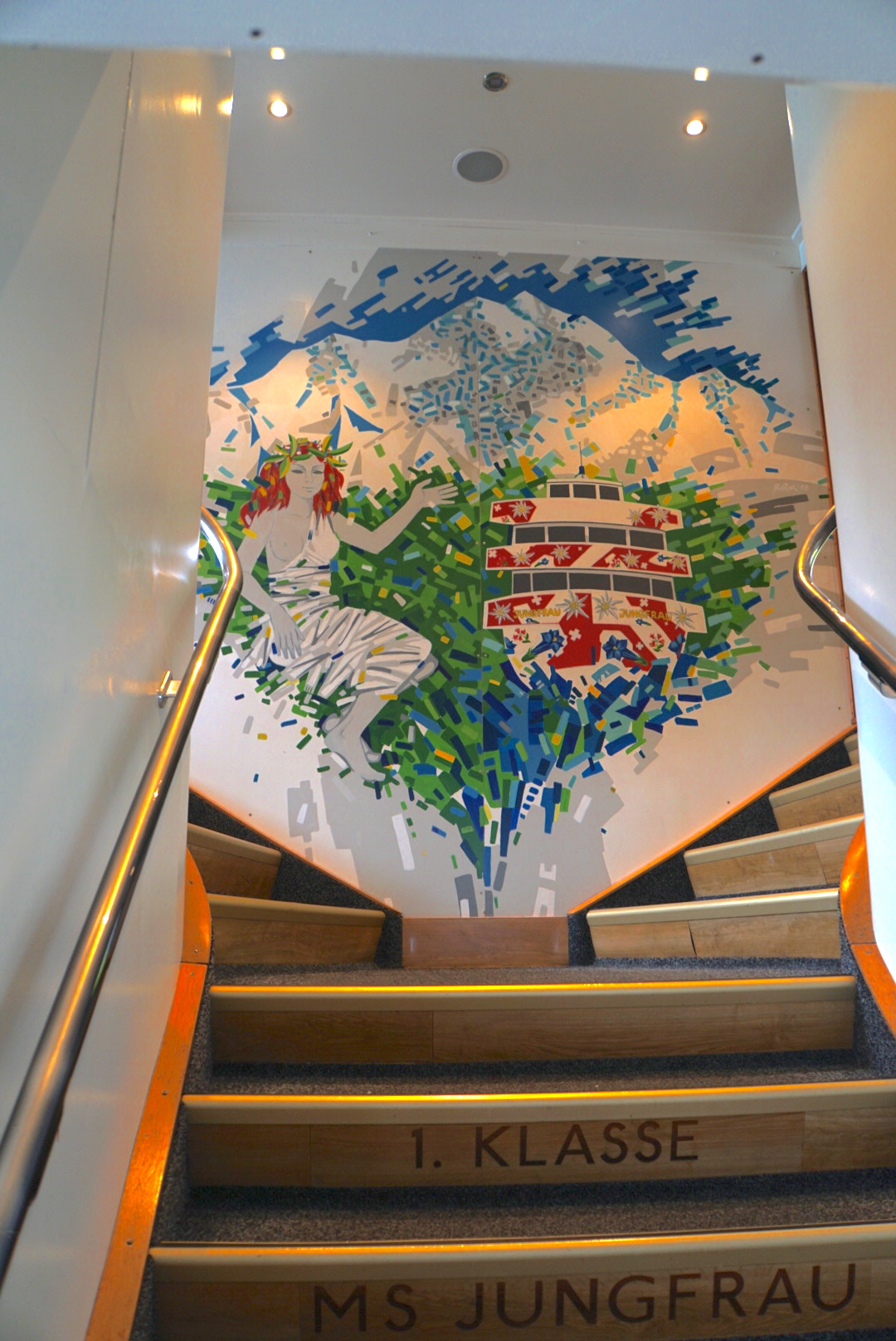 Here’s our group upstairs on the boat. They came and took our orders for coffee, then brought it to us. Anytime we wanted to, we could run outside and shoot pictures on the deck.

The views on Lake Brienz are stunning. Snow-capped mountains all around, picturesque villages lining the shores, waterfalls here and there, the occasional castle. It was a bit cold and windy on deck, but very comfortable inside the boat cabin.

Here’s one of the villages on Lake Brienz. It’s a big lake, so there are quite a few of them. 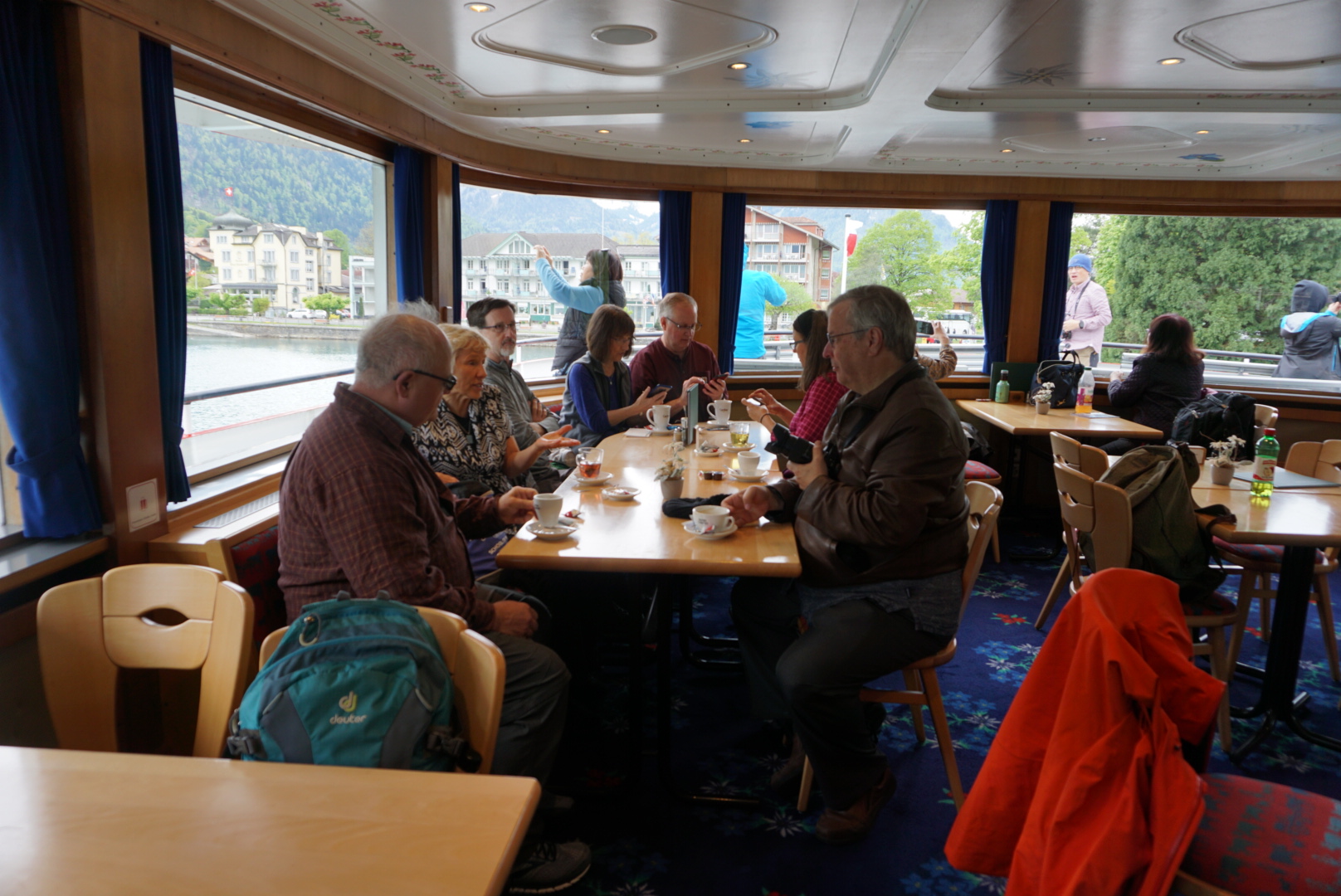 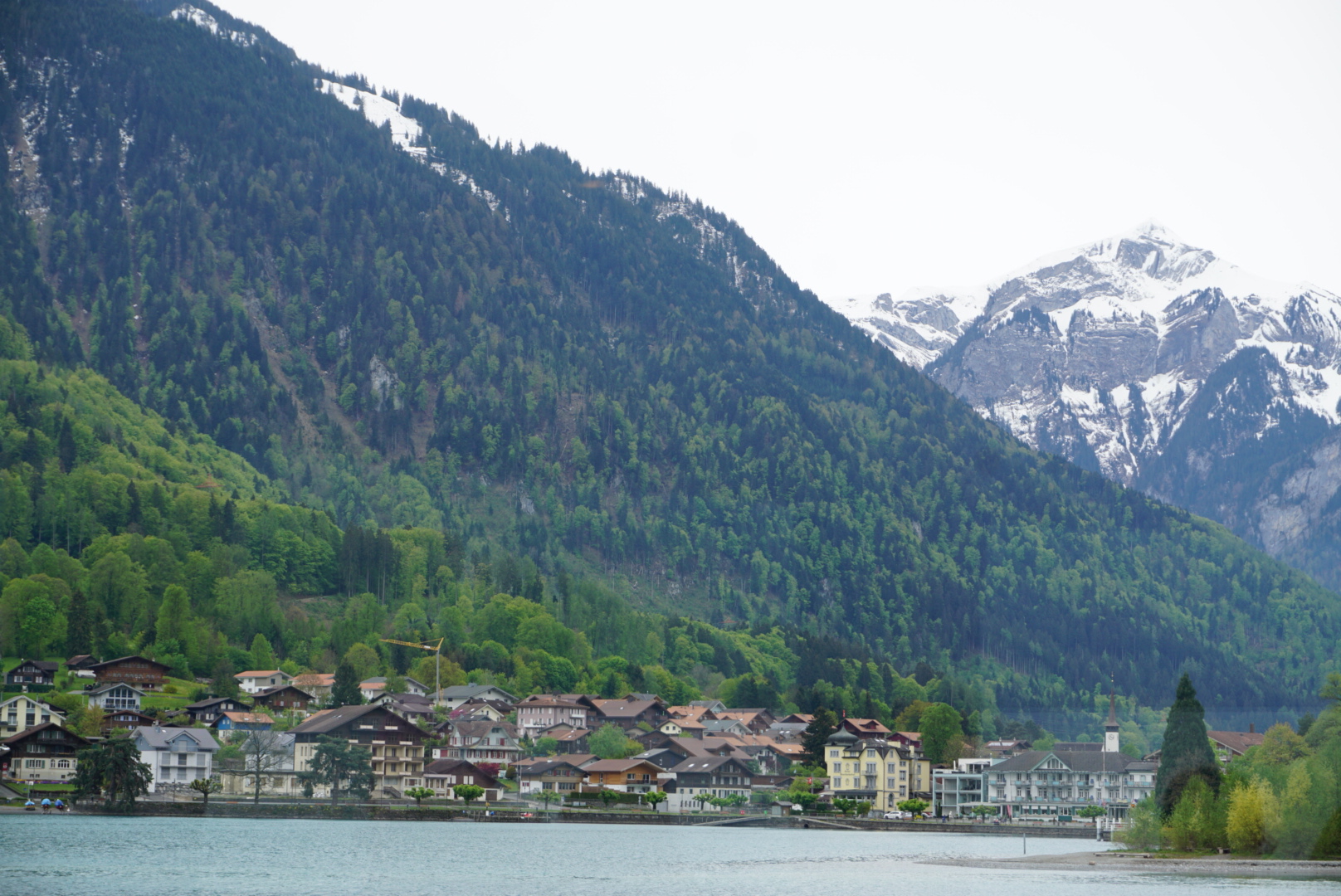 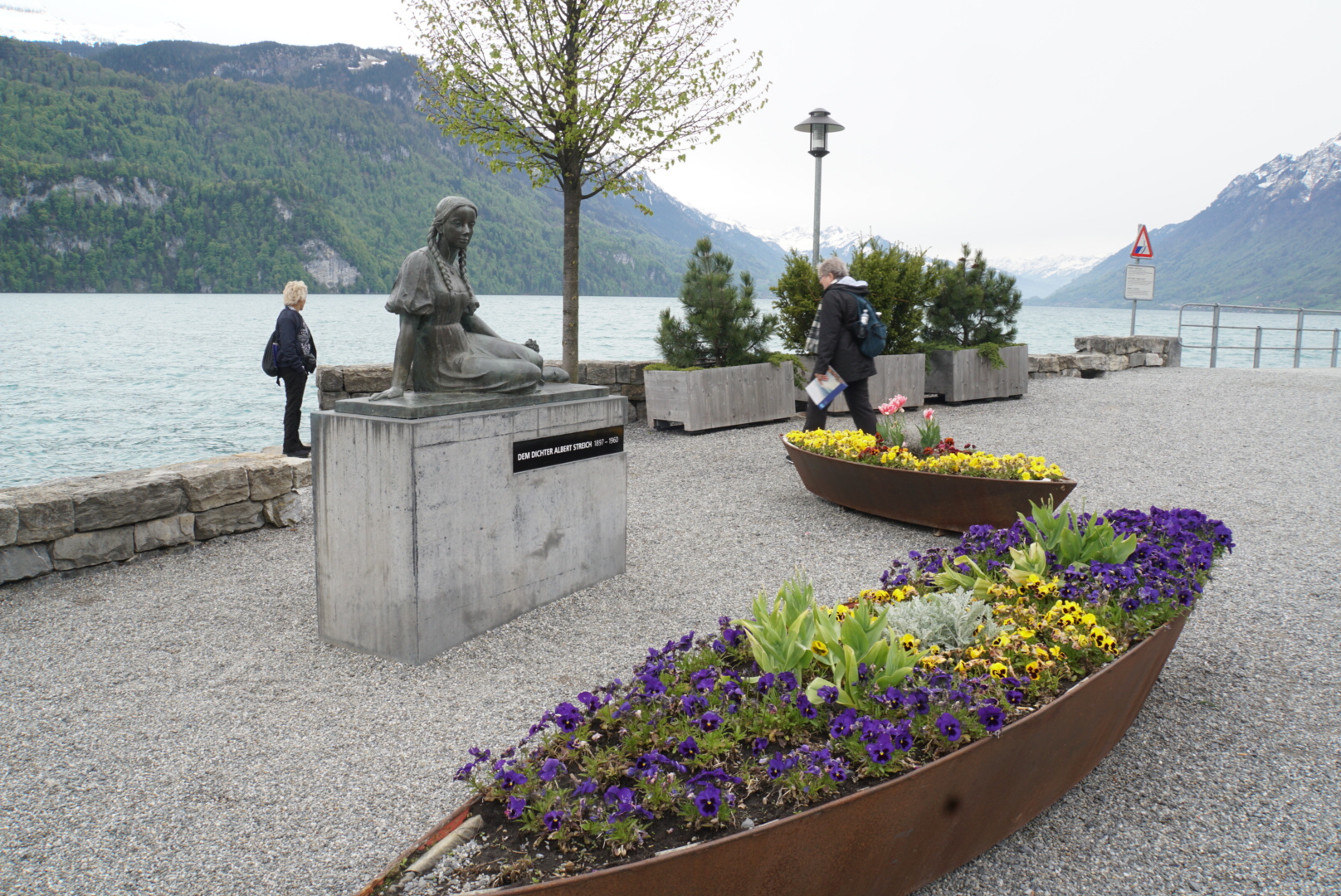 It took about an hour to sail from Interlaken to the town of Brienz. We got off there and walked along the waterfront, which was very pleasant. There are lots of statues, both wood and stone, and flowers, and beautiful views. We especially enjoyed the life-size wood carvings. 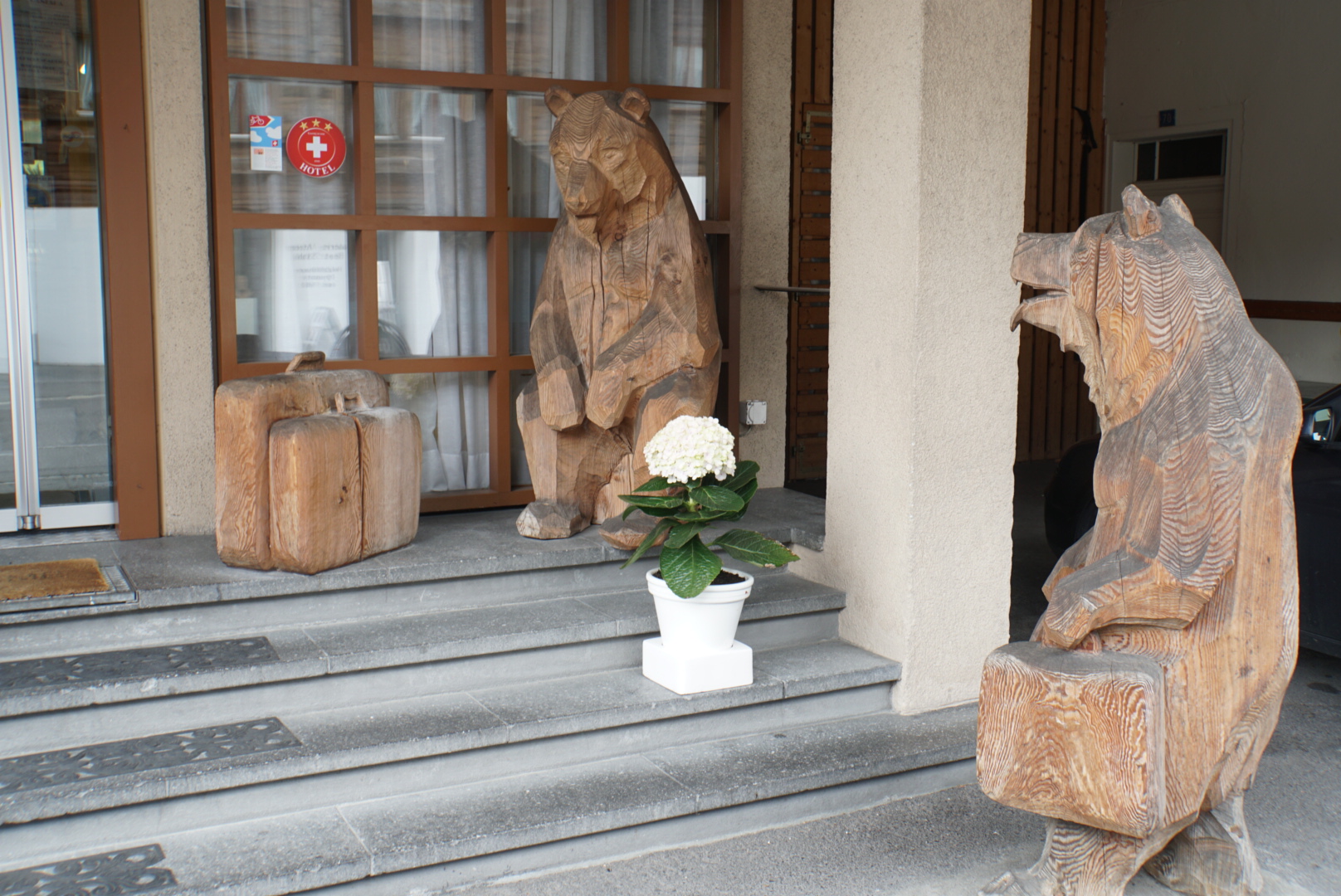 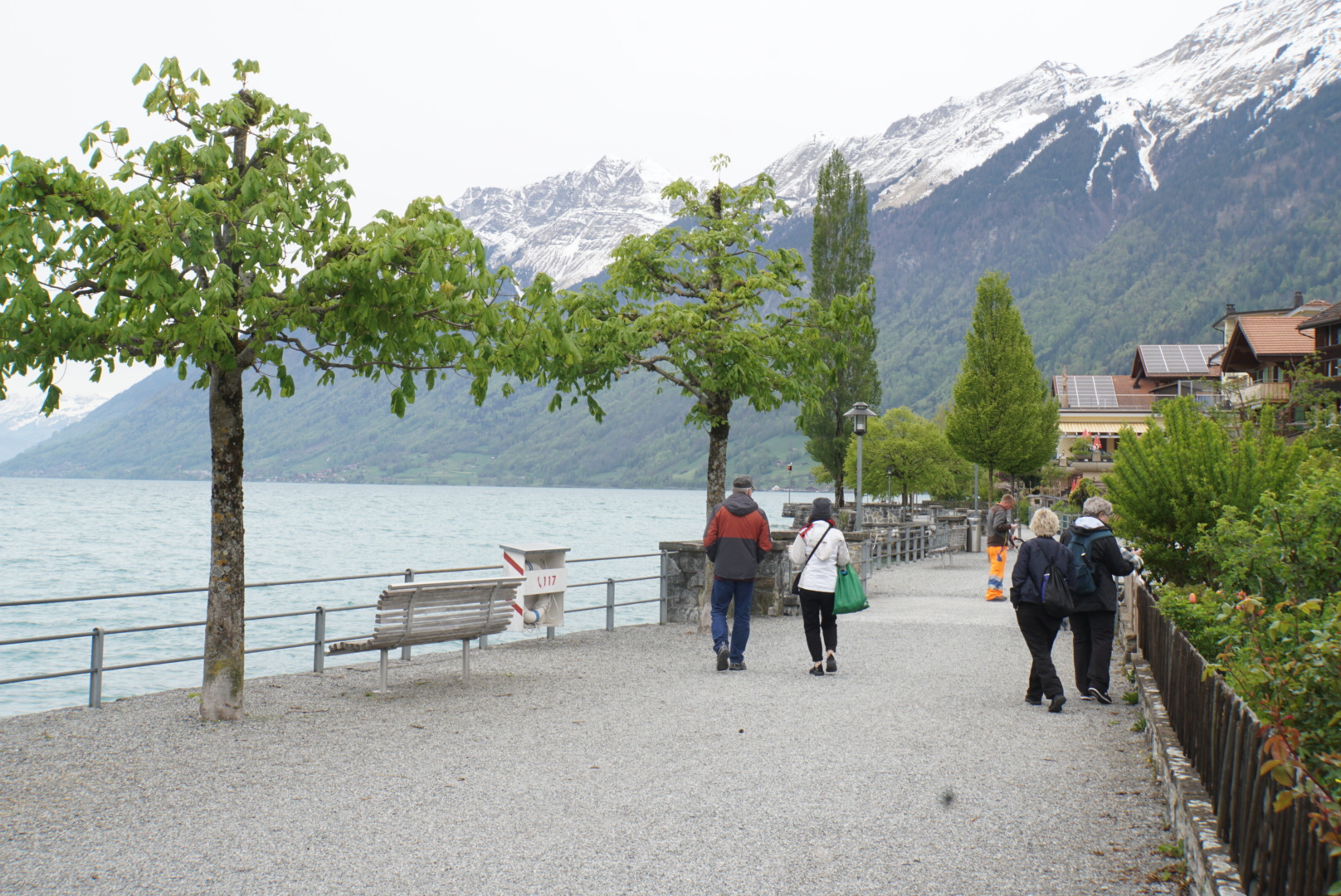 We had heard that there were woodcarving shops so we visited some. They featured an amazing variety of carvings, mostly animals. I was especially attracted to this clock but couldn’t quite afford it. 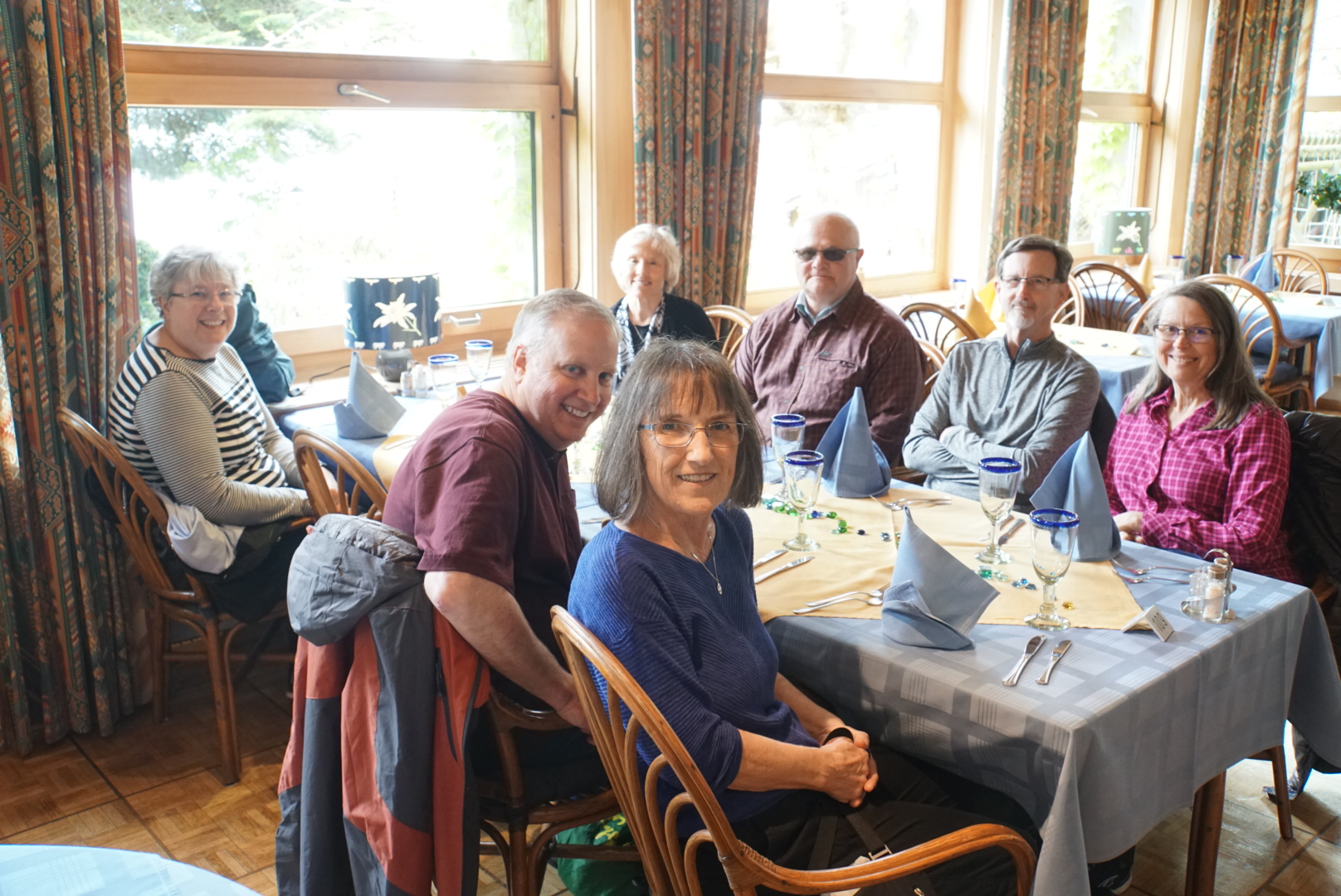 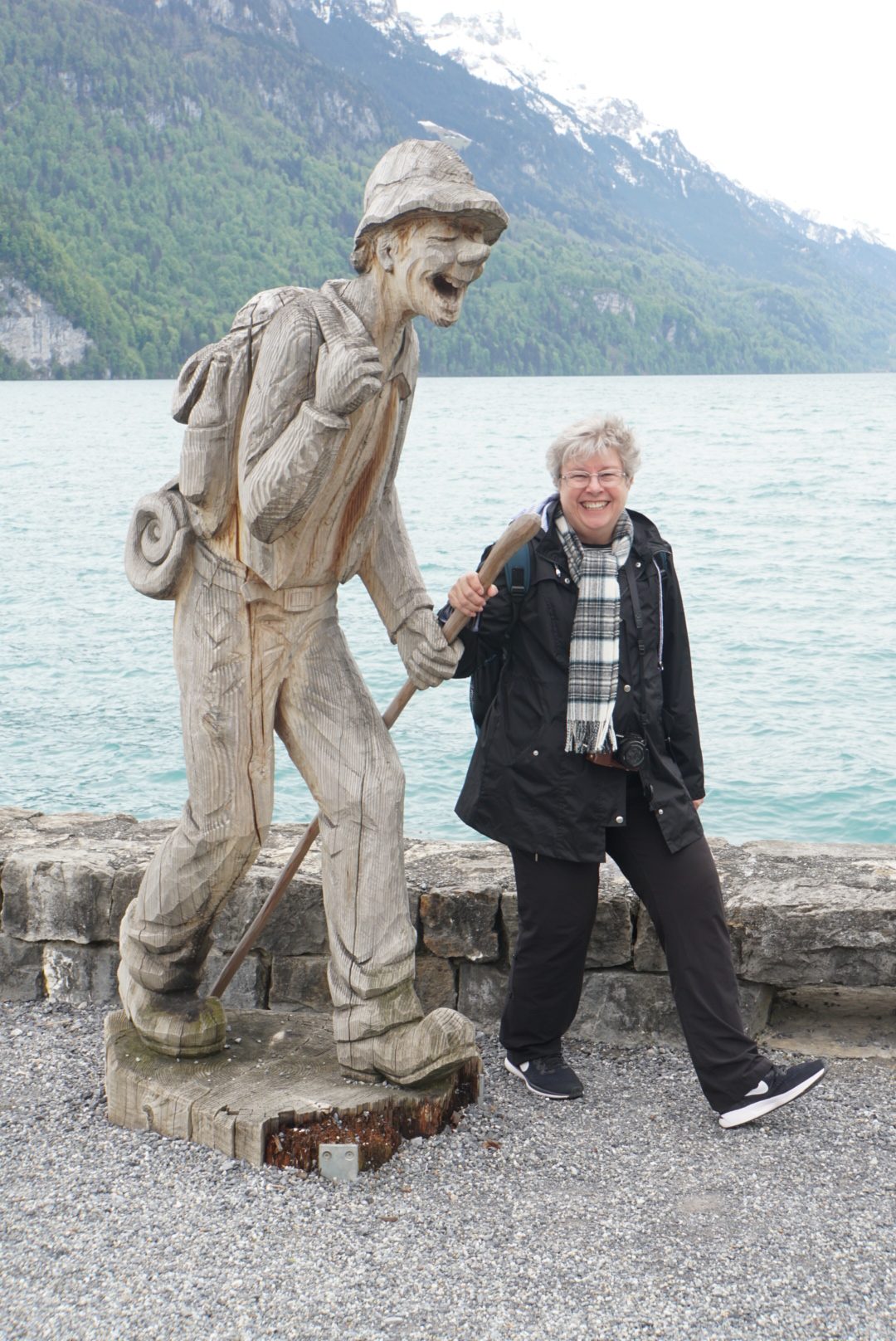 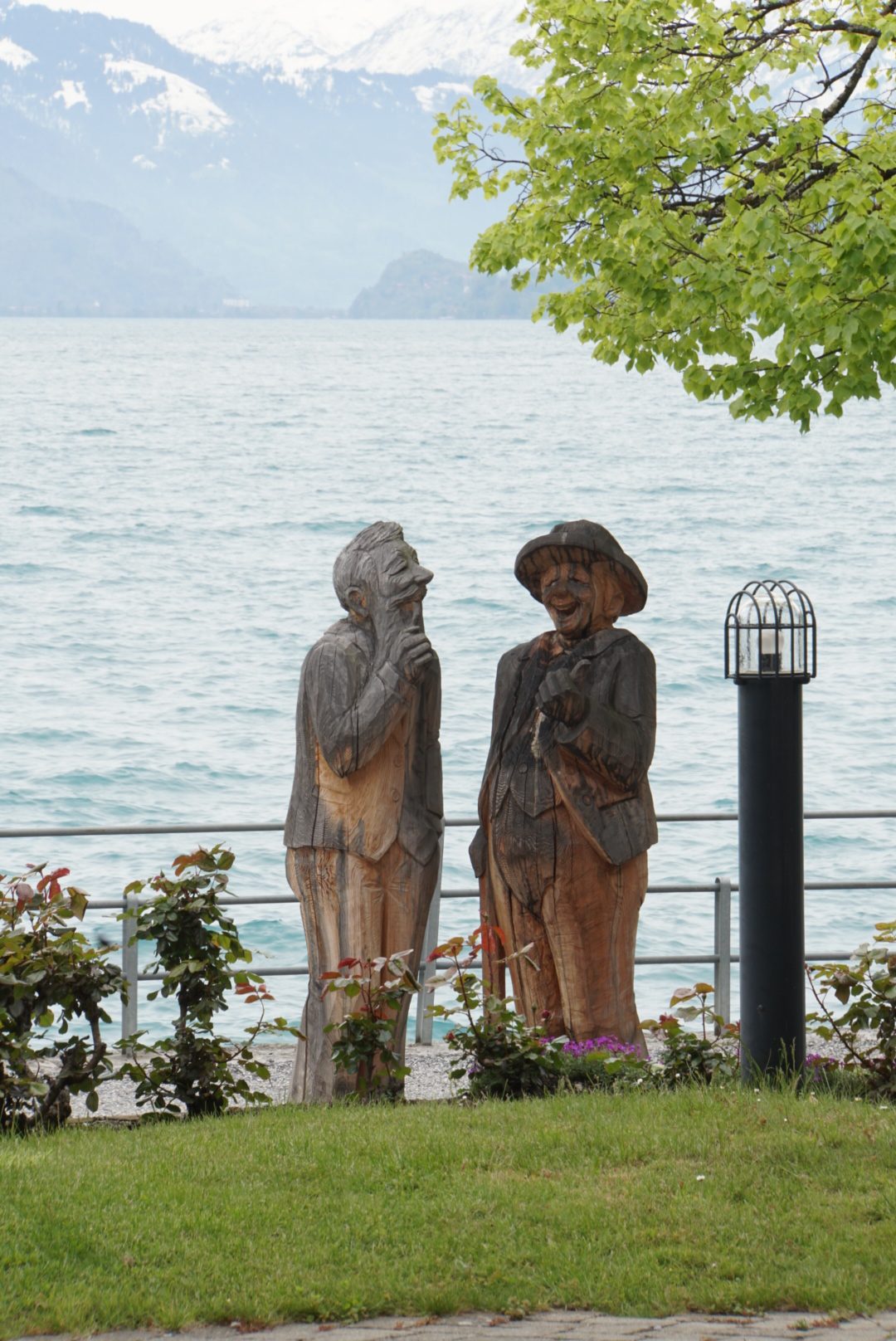 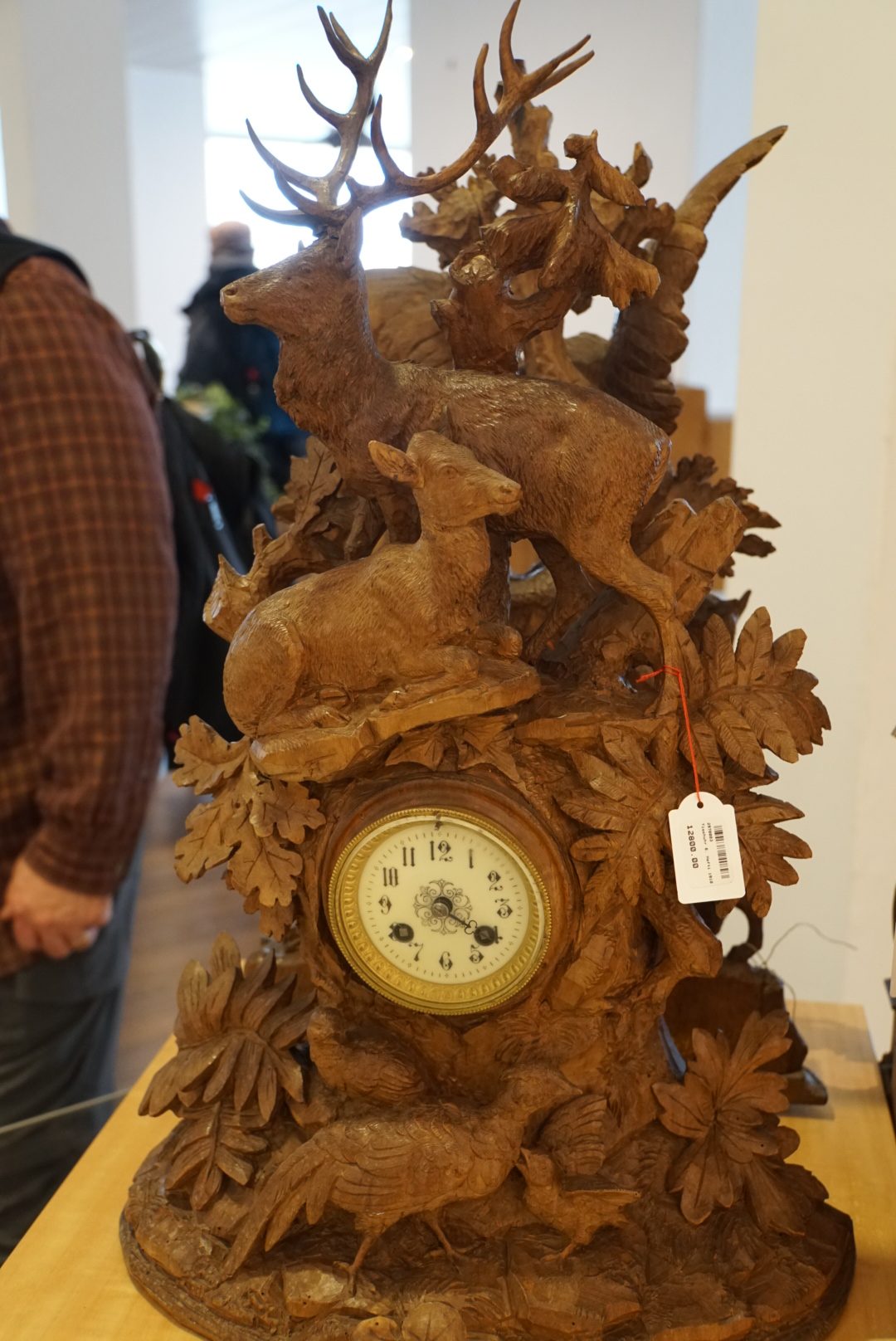 We found a restaurant offering both Swiss and Indian food, so we had lunch there near the waterfront.

After lunch we took the train to Interlaken and walked around that town for a while. Walking through Interlaken we found lots of flowers on display. They really made the city look beautful. We watched hang gliders land in the park and shopped for chocolate until the weather turned cold and rainy. 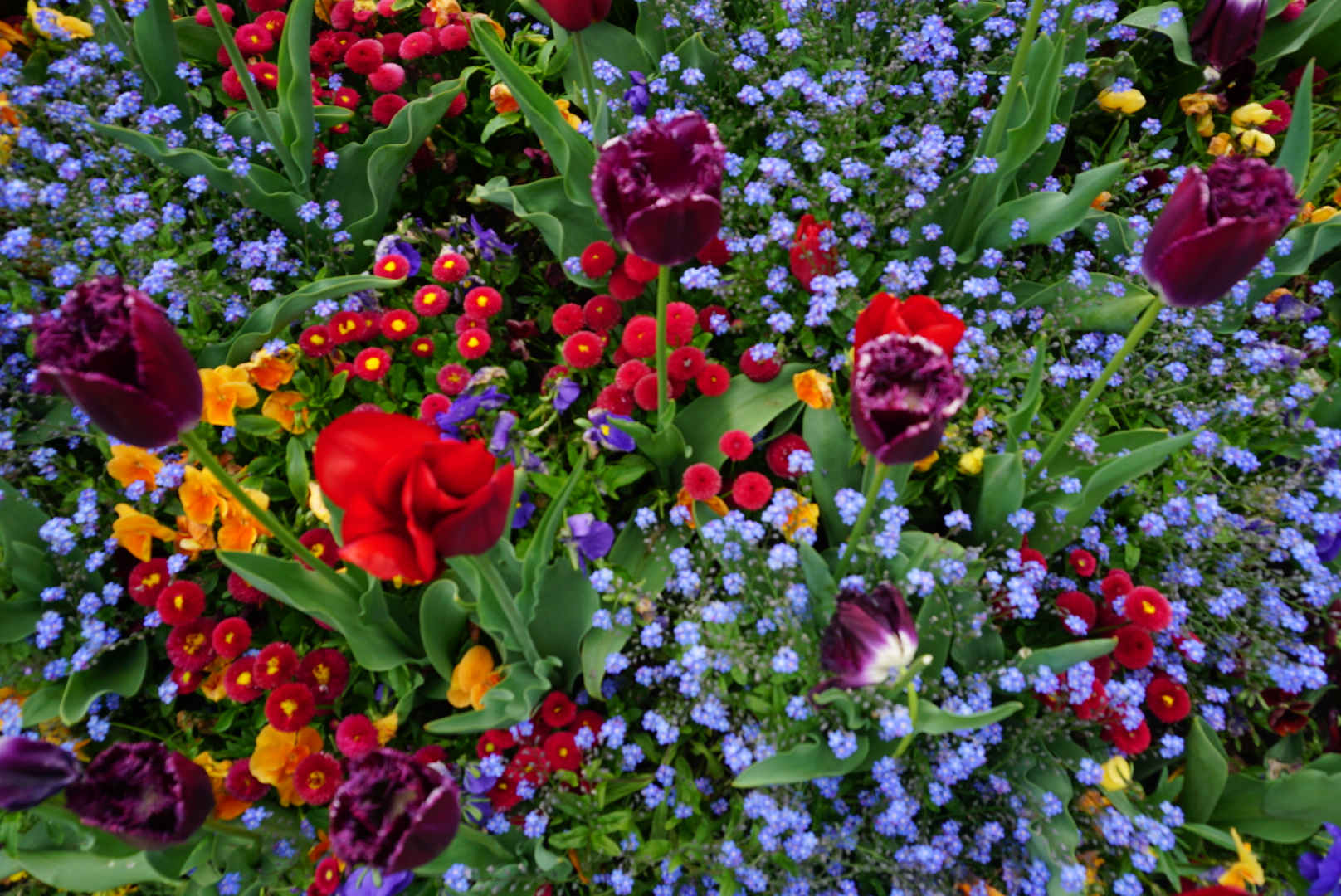 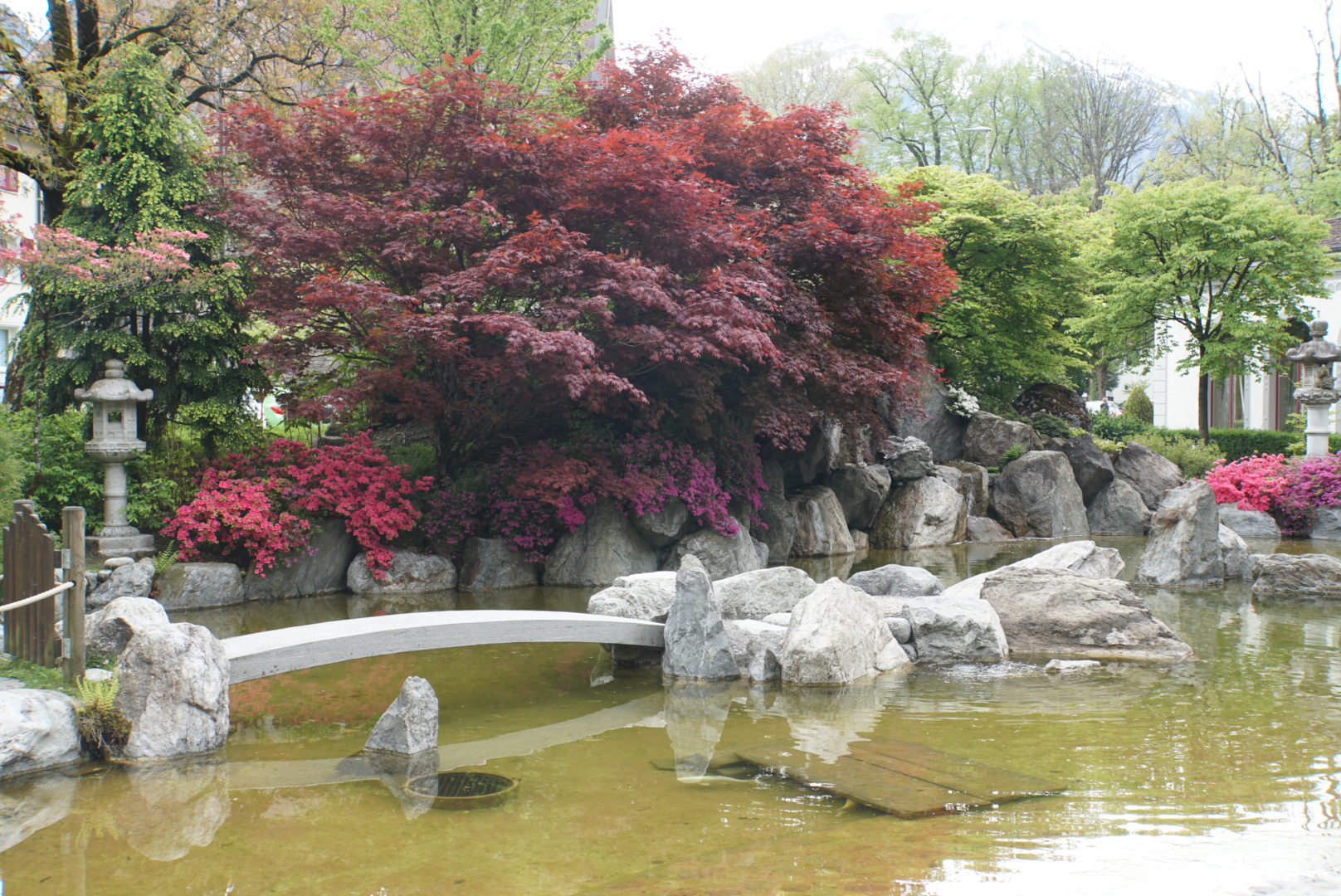 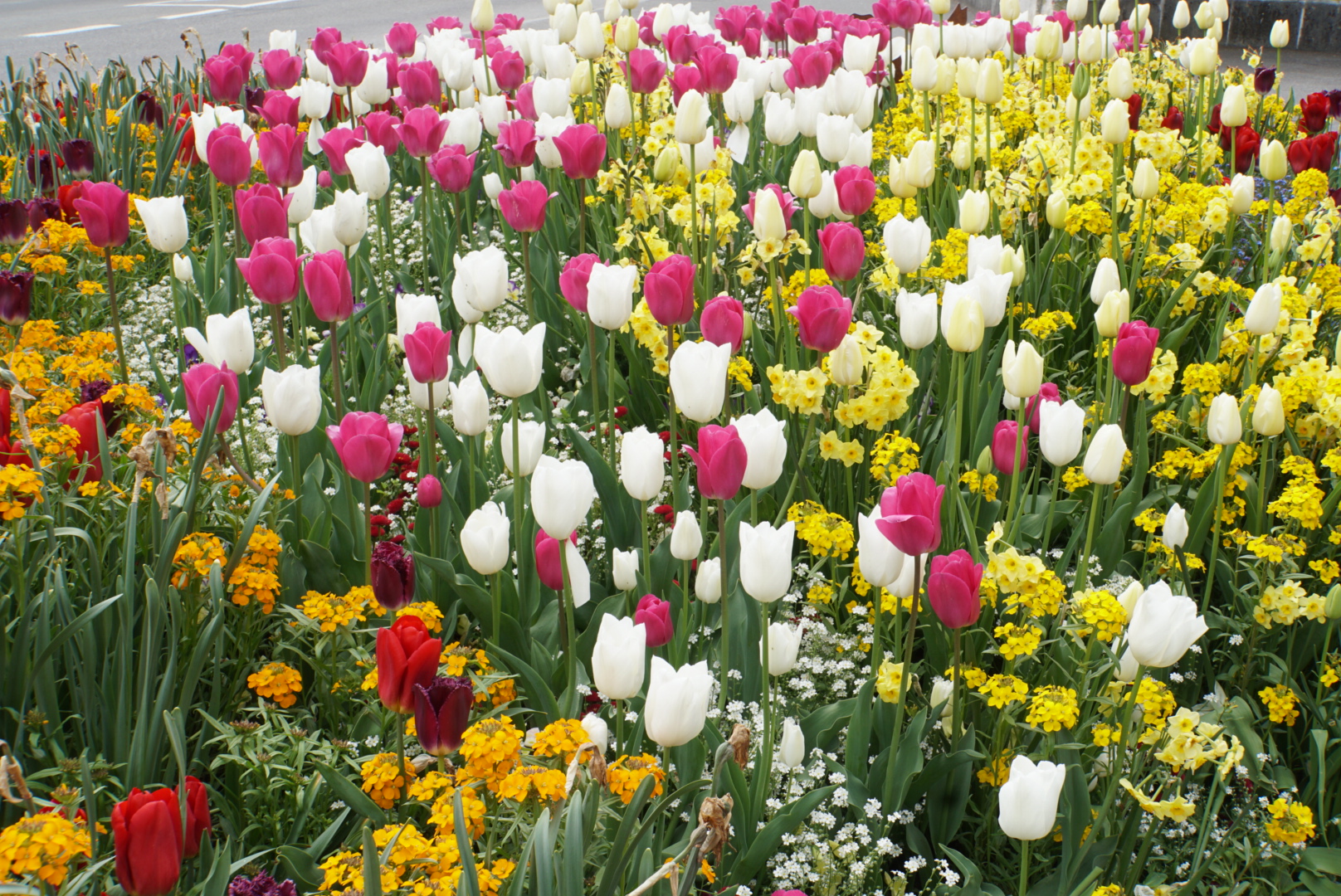 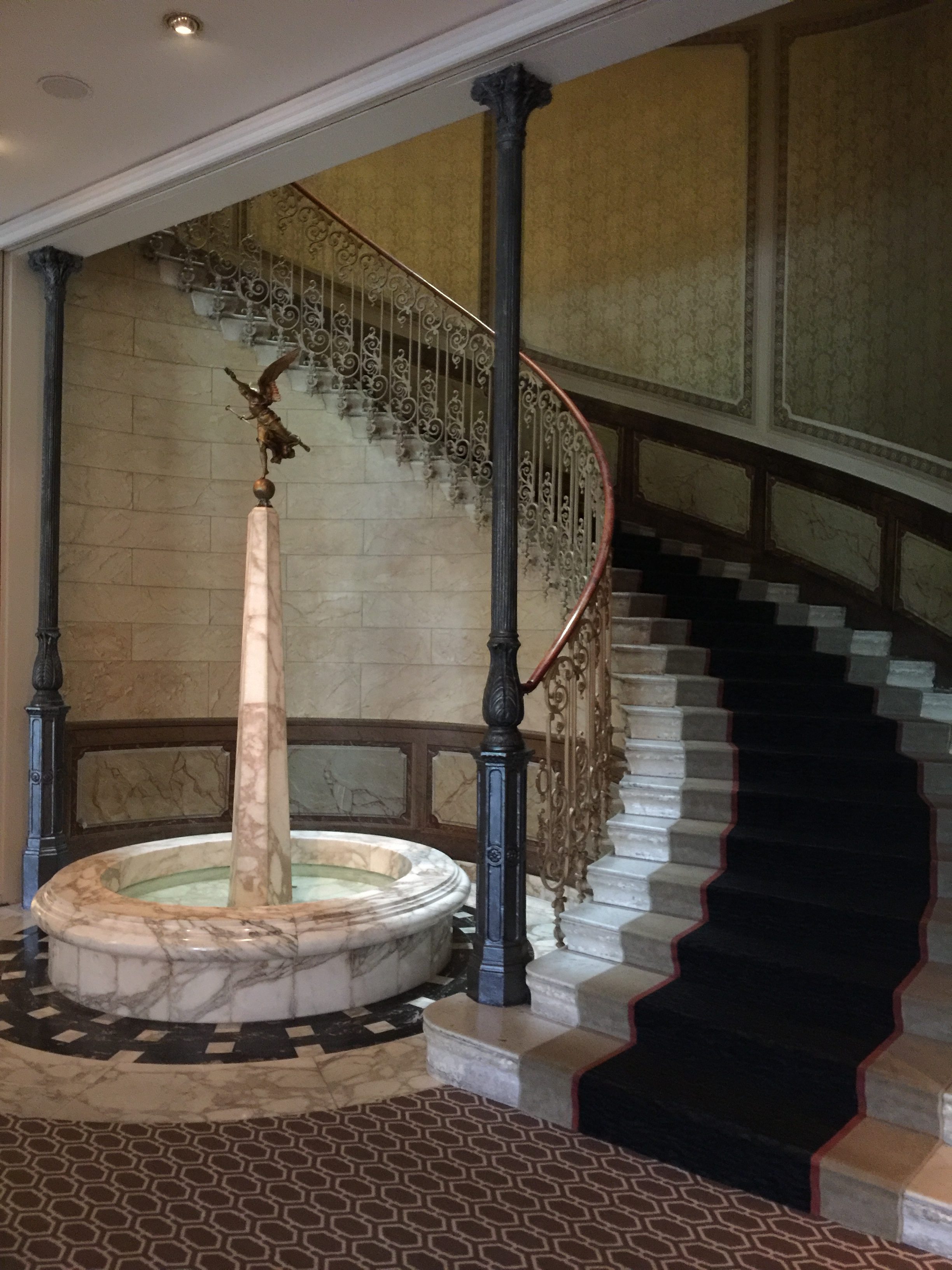 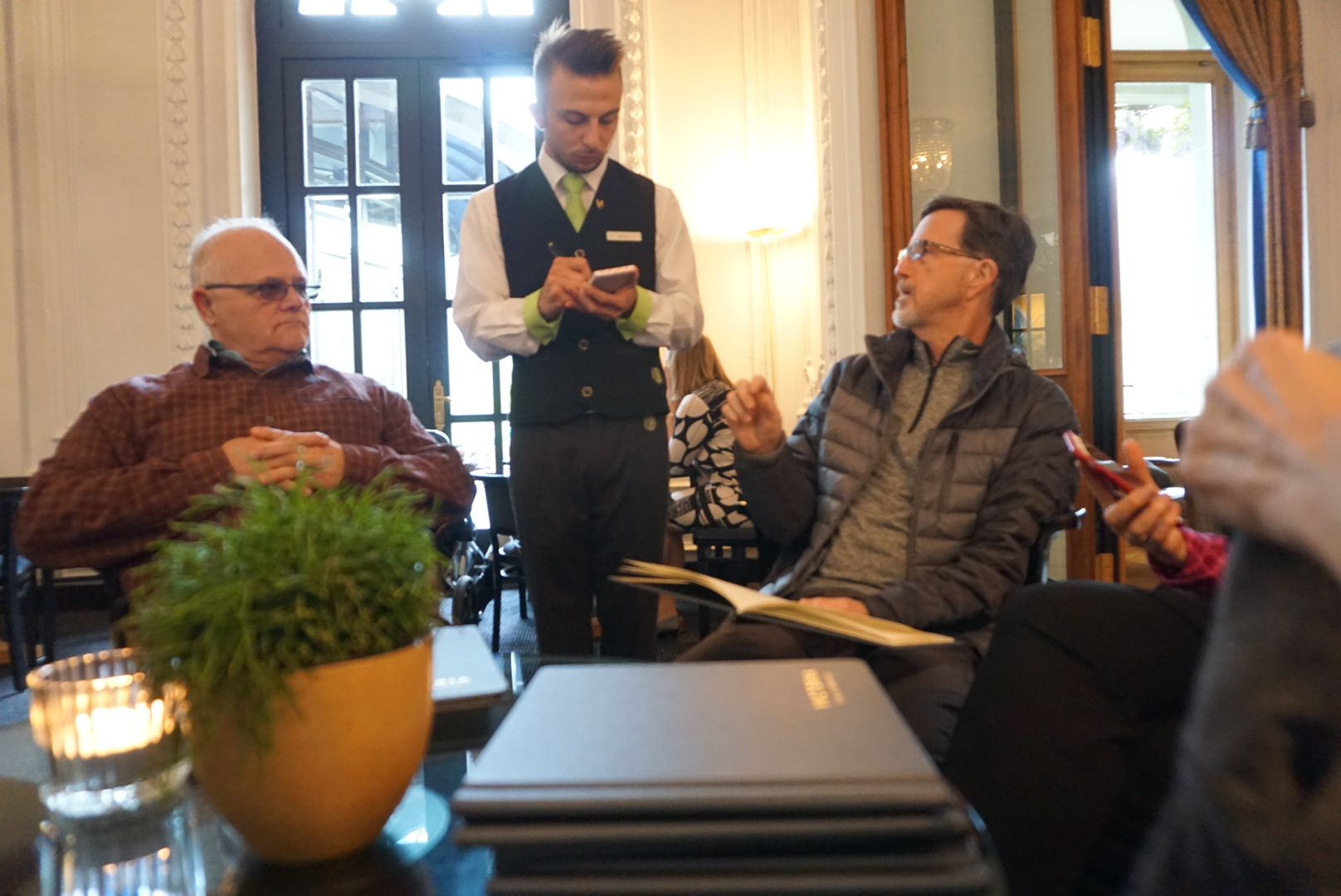 Then we walked back to the Hotel du Lac (near the boat dock) and had a very nice dinner. Some folks left early, skipping dessert; the rest of us who, after eating dessert, came a 1/2 hour later found that our train to Lauterbrunnen (a.k.a. home) had been cancelled due to some trouble with the tracks.

The messages were all in German, and there were no staff at the railway station, so we weren’t sure what to do. I found a fellow passenger, who could read the message and was also going to Lauterbrunnen, who told me that a bus would appear to take us where we needed to go. And he was right! Pretty soon here came the bus, we got on, and actually got home sooner than we would have by train.