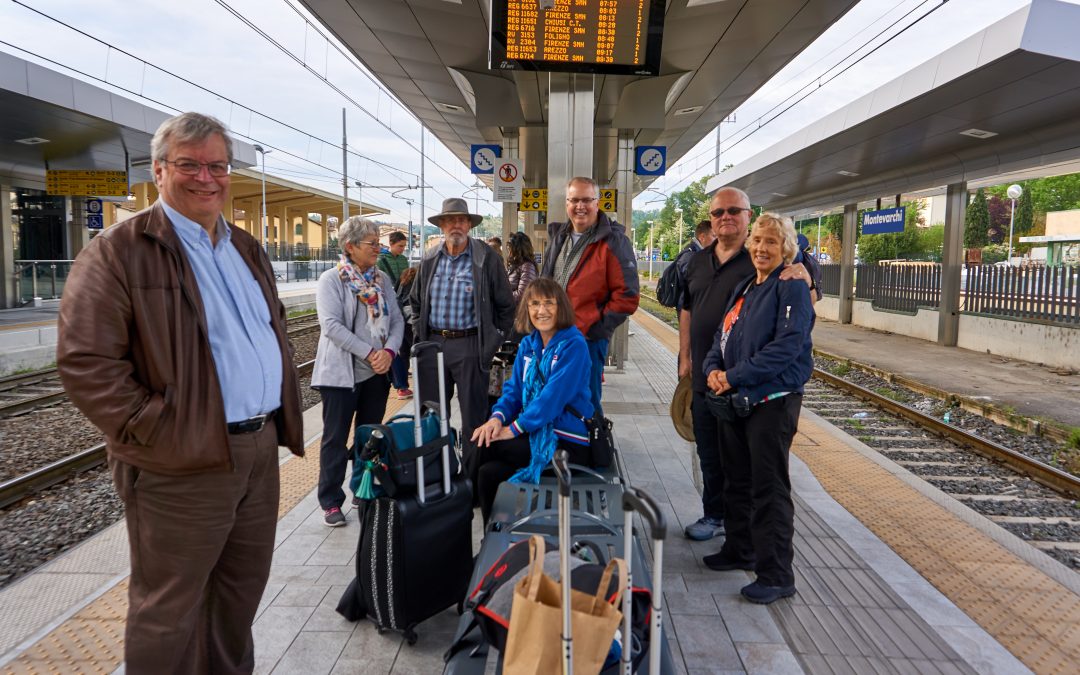 Here we are at 7 am in Montevarchi, Tuscany, ready to start our railroad journey to Lauterbrunnen, Switzerland! Look at the confidence in those faces; the anticipation that this is going to be a day in which everything goes as planned.

There are no more photos that were taken on this day. We all had other things on our minds…

Our scheduled time to leave the villa and head for the Montevarchi train station was 7 am. And we did it! Our group has been great with being ready on time every day this week. The drivers brought two vans and carried us and our luggage to the back side of the station, so as to put us directly on the right platform. It was easy and we were there in plenty of time.

That train took us to Florence, where we needed to transfer to a train bound for Milan. In a large station like Florence, they don’t tell you which platform a train will be on until it arrives; apparently they choose a track at the last minute. So crowds of people stand in front of huge screens waiting for information to be updated, and when it is, big chunks break off from the mass and head off together to the assigned platform.

Our train for Milan was a little late coming into Florence, so when its track number was finally posted we joined the mob heading that way. They don’t give you much time, and when you have suitcases everything becomes a lot more difficult. But we made it on time, and headed for Milan.

We had been through Milan on our SwItaly 1 trip; in fact we stayed there for a few nights. The train station there is an enormous old relic that we’d probably find beautiful if we were there to sight-see but instead we had found it confusing and a little scary. It’s bigger than a lot of airports, and finding your track and train can be difficult. This time, everything went smoothly and we got right on to our train. Next stop: Spiez.

Milan-to-Spiez was supposed to take 2½ hours, the longest section of our day’s journey. It goes through the Alps, from Italy to Switzerland, and promised beautiful Alpine views. Unfortunately the trip didn’t go as planned. At a stop near the Swiss border, we learned that a boulder had landed on the track ahead, and the train could not proceed until the track was cleared. At various times through the next three hours, the boulder was upgraded to “boulders” or “landslide” depending on the latest rumor.

Anyway, the train started up again three hours later amid great cheering. We were not worried about connections to our Swiss destination because they have lots of trains, and we were in touch with Ken and Sue who were planning to meet us in Lauterbrunnen. We pulled into the next station and were greeted with the announcement that everyone had to get off this train, go across the platform, and go on to the train there.

So we hauled ourselves and our luggage out of the train and into the other train – which was already full of people! There was no room for us. We ended up in a first-class cabin where several people treated us very nicely, making room as they could, but most of us were standing, pressed up against each other. Suitcases were stacked on top of each other in the spaces between cars. Pretty soon a box of snacks was handed down the car. And I got an email from the Italian train company saying that my train was delayed, and they were sorry.

This new train proceeded on the track – I don’t know why our original train couldn’t have done that, but I’ll wager that the answer would be in the Italian language – and then, when we arrived at the next stop, the same thing happened. Everybody had to get out, along with their luggage. Except this time we were not told where to go.

But we figured it out! We found a Spiez-bound train and got on it. Nobody ever checked any of our tickets! In this train we crossed the border into Switzerland, and of course from there on everything worked perfectly. I was thankful to be able to sit down! And no one’s luggage was lost.

Spiez is a city on Lake Thun, and the views were beautiful. From Spiez we transferred as planned on to the next train to Interlaken, and from there got a train to Lauterbrunnen, arriving in time to meet Ken and Sue and check into our wonderful Hotel Staubbach. Whew!