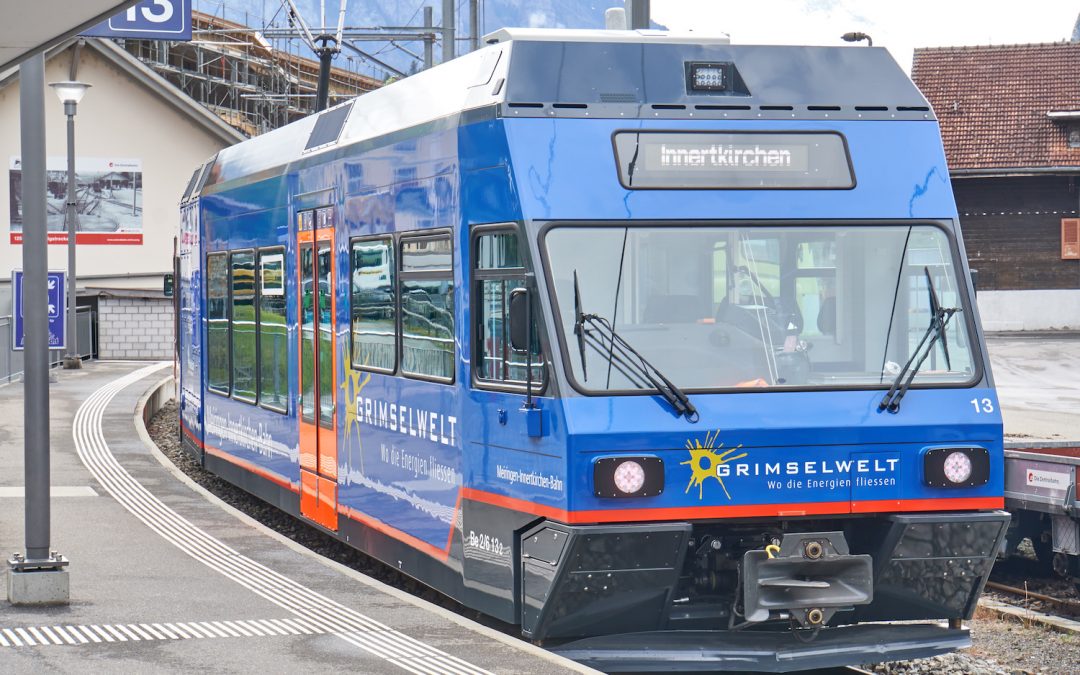 The train we took to Aareschlucht was about the size of a bus.

Today we decided to go over to Meiringen by train and walk through the Aareschlucht. (We’ve all been having fun trying to pronounce it.) The Aareschlucht is a slot canyon with a river at the bottom.

We took the regular train over to Meiringen, but from there to Aareschlucht we rode on a special train. It’s very small, as you can see from the above picture. When it arrives at Aareschlucht, it’s in a tunnel beneath a mountain. When the train door opens, a door in the side of the mountain opens at the same time. The two doors are aligned, so you step out of the mountain and the train at the same time. 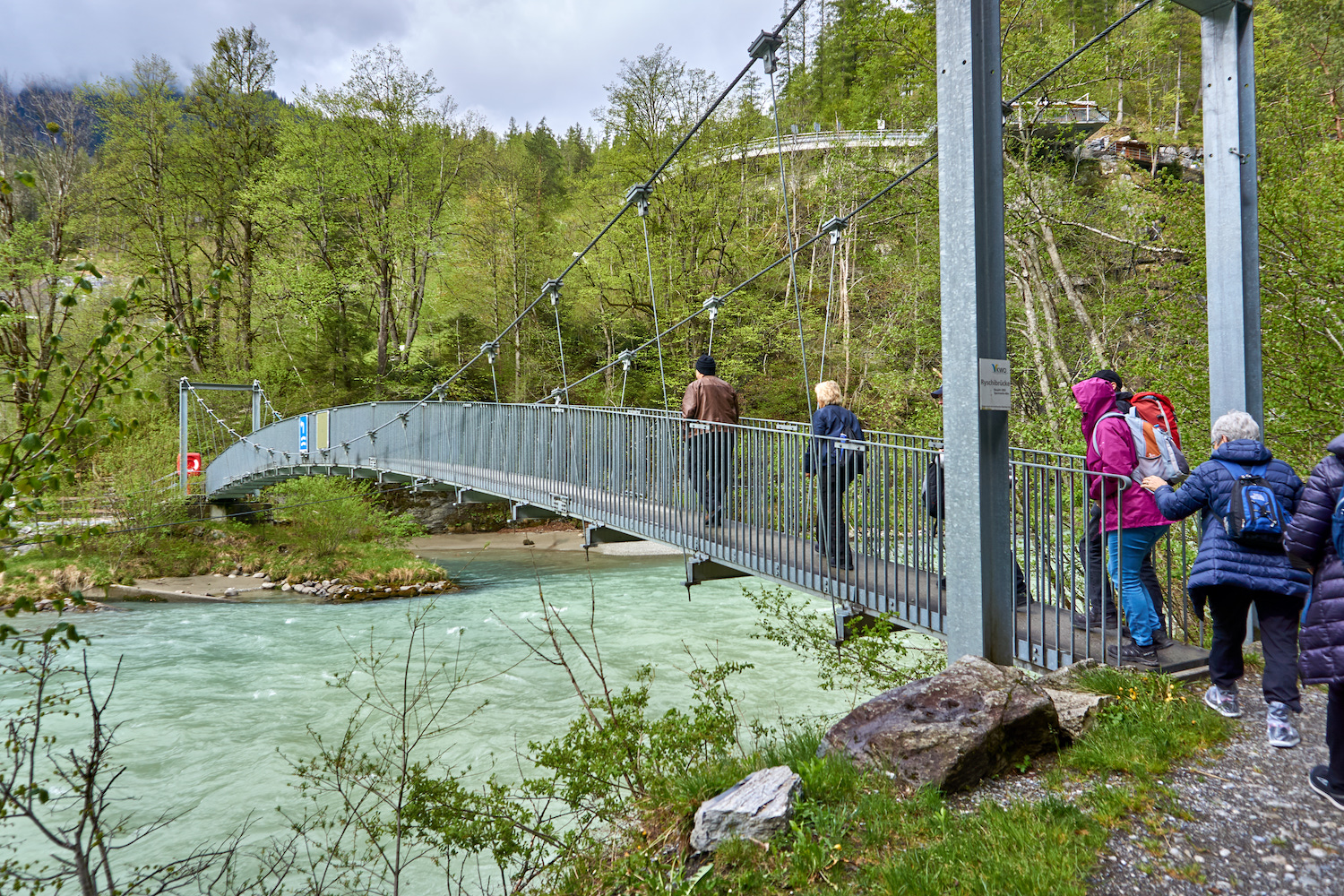 After emerging from the mountain, we crossed the river on a pretty arched bridge, climbed up the steps to the starting point, and began our walk through the canyon.

Above is the sign at the entrance point. The not-so-fierce legendary inhabitant of the canyon is almost a dragon, but he doesn’t fly, so they call him a Worm (Wurm). You can buy stuffed ones in the gift shop.

To the left, you can see our group starting down the walkway into the canyon. Arden lagged behind, taking pictures the whole way. I’m looking forward to seeing them! 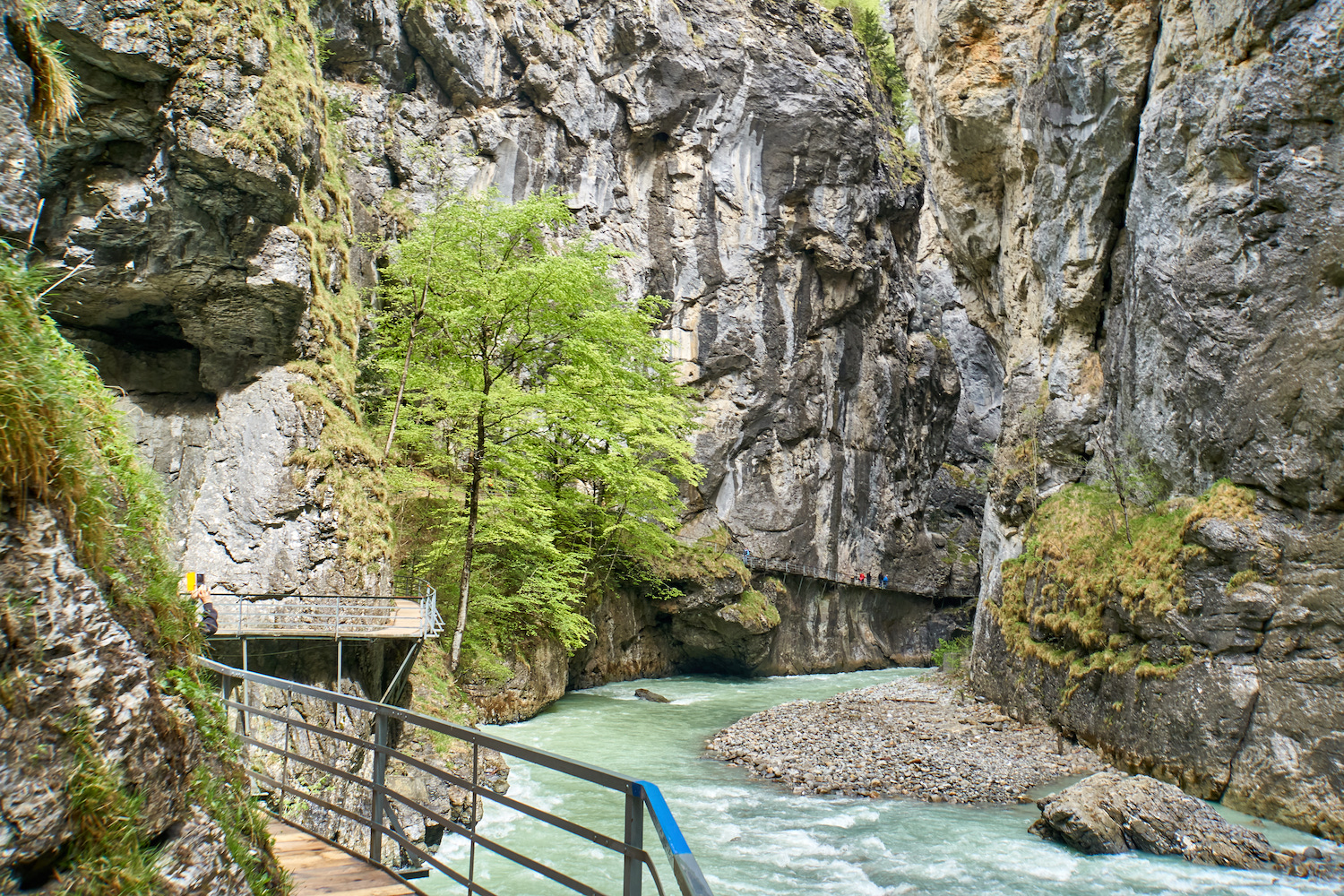 The path follows the river through the canyon, of course, so we had lots of twists and turns. The rocks, where the water has carved them out, are exceptionally beautiful.

Near the beginning of the walk, the walkway is pretty close to the ground. Later on, it gets a little more scary.

I found this walk to be especially photogenic; there are lots of beautiful scenes. Click on the photos below to see larger versions – they are worth it. 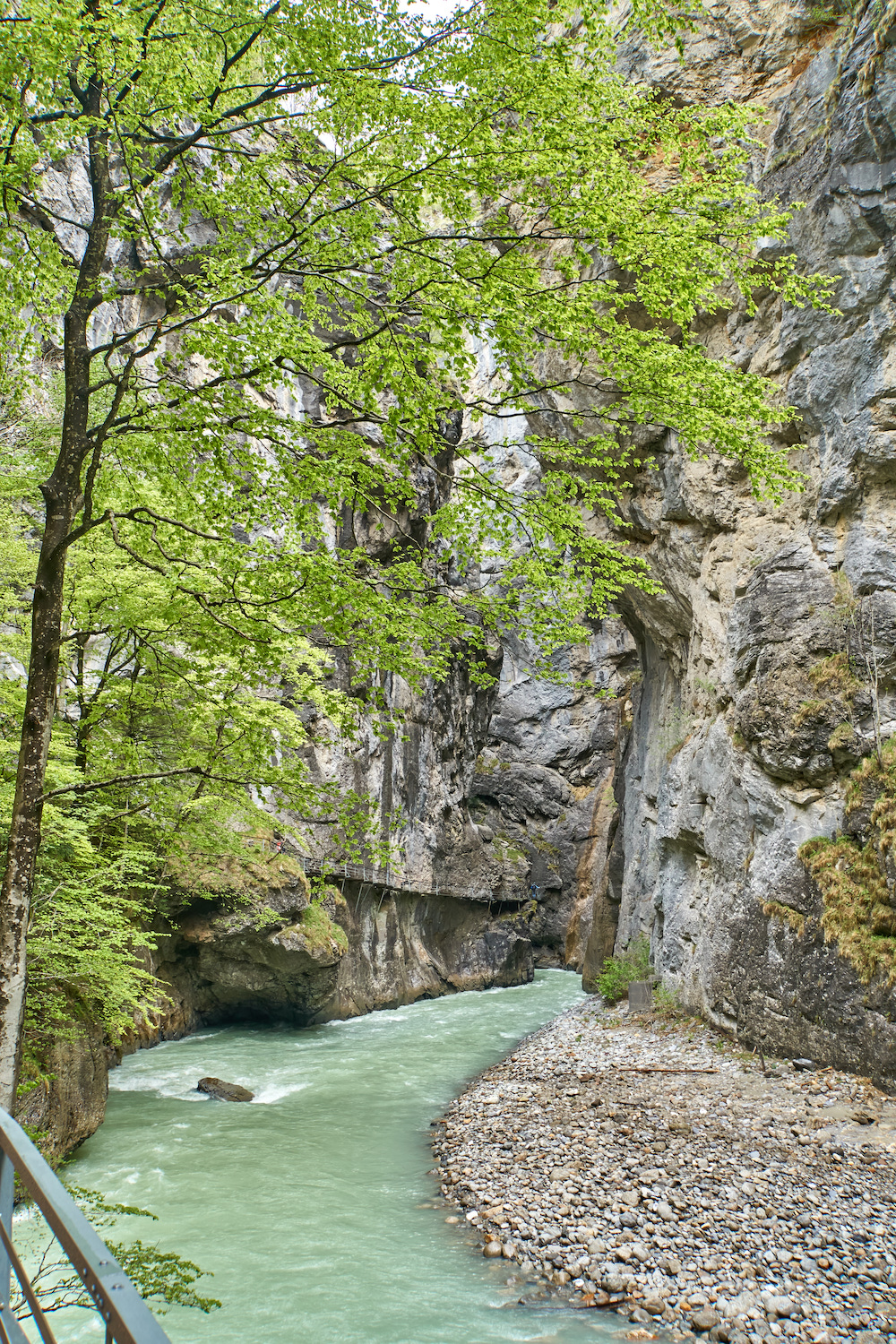 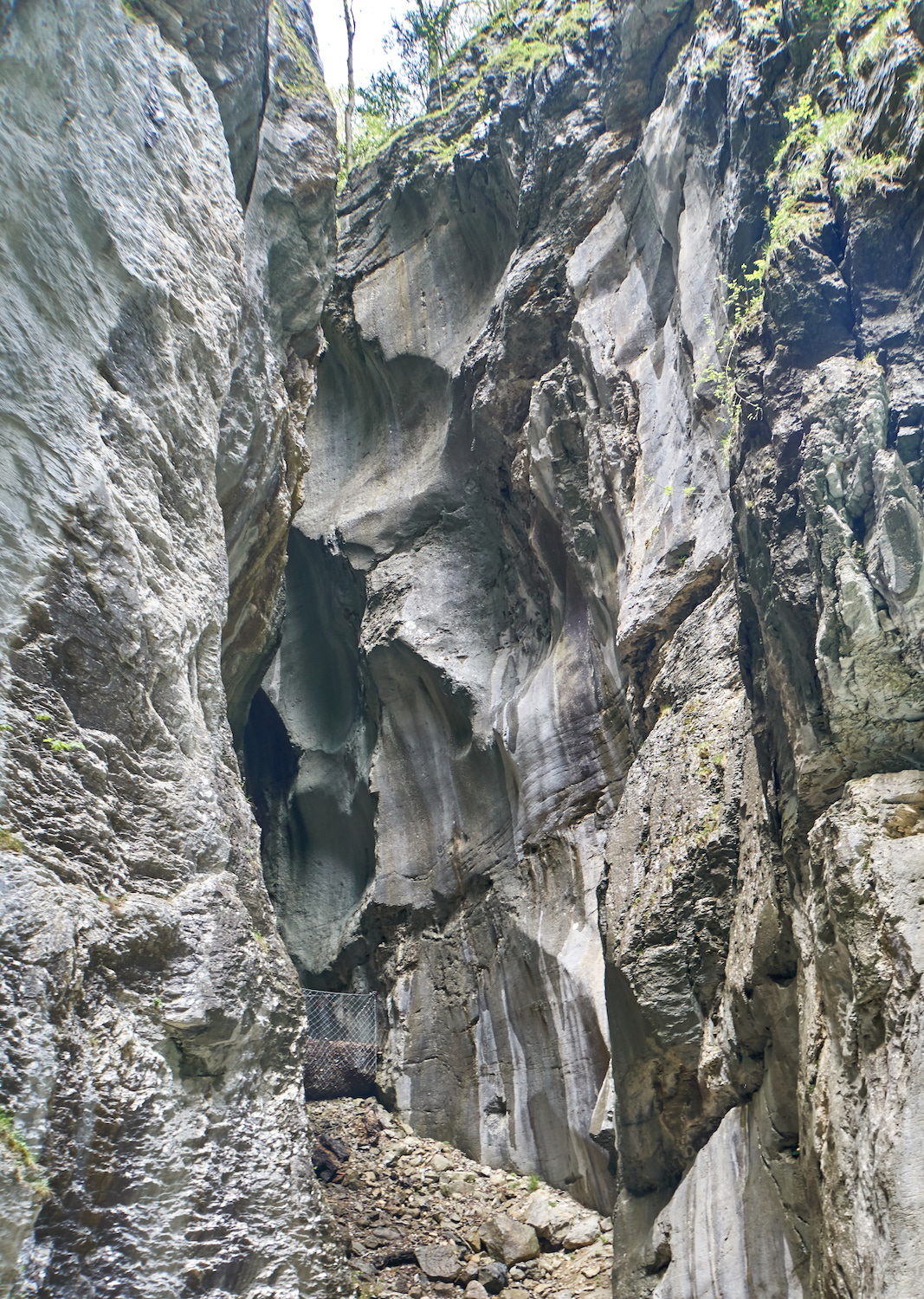 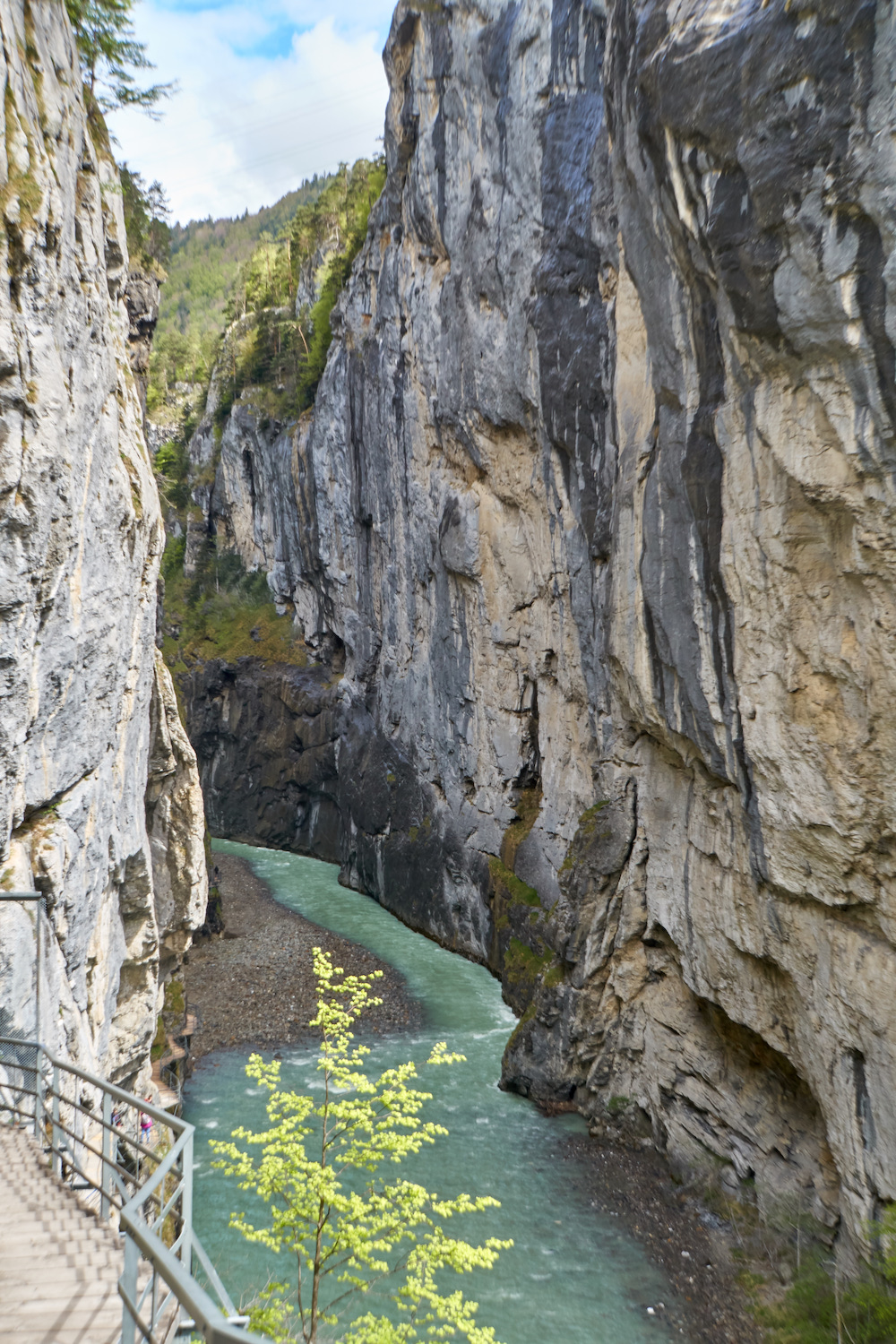 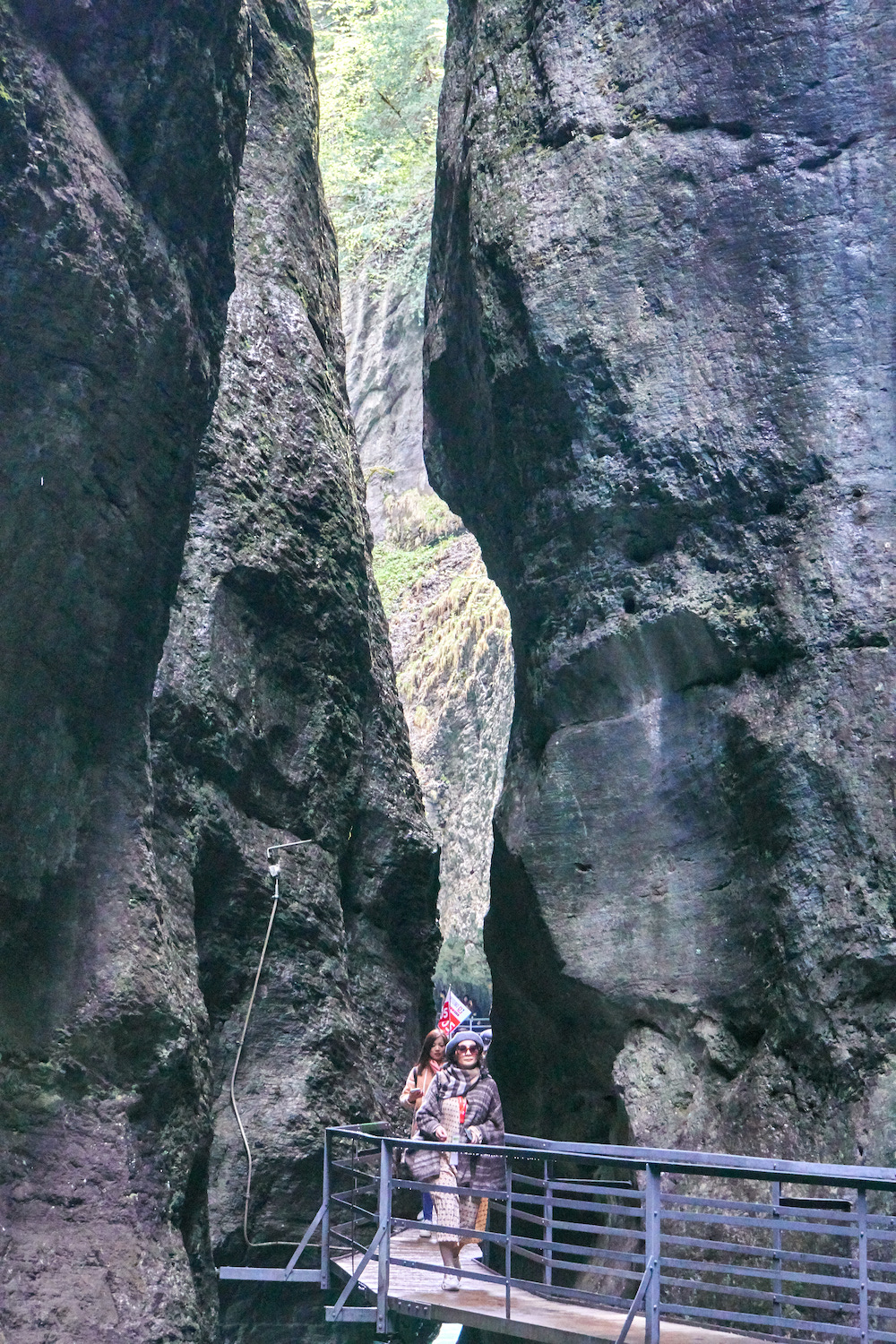 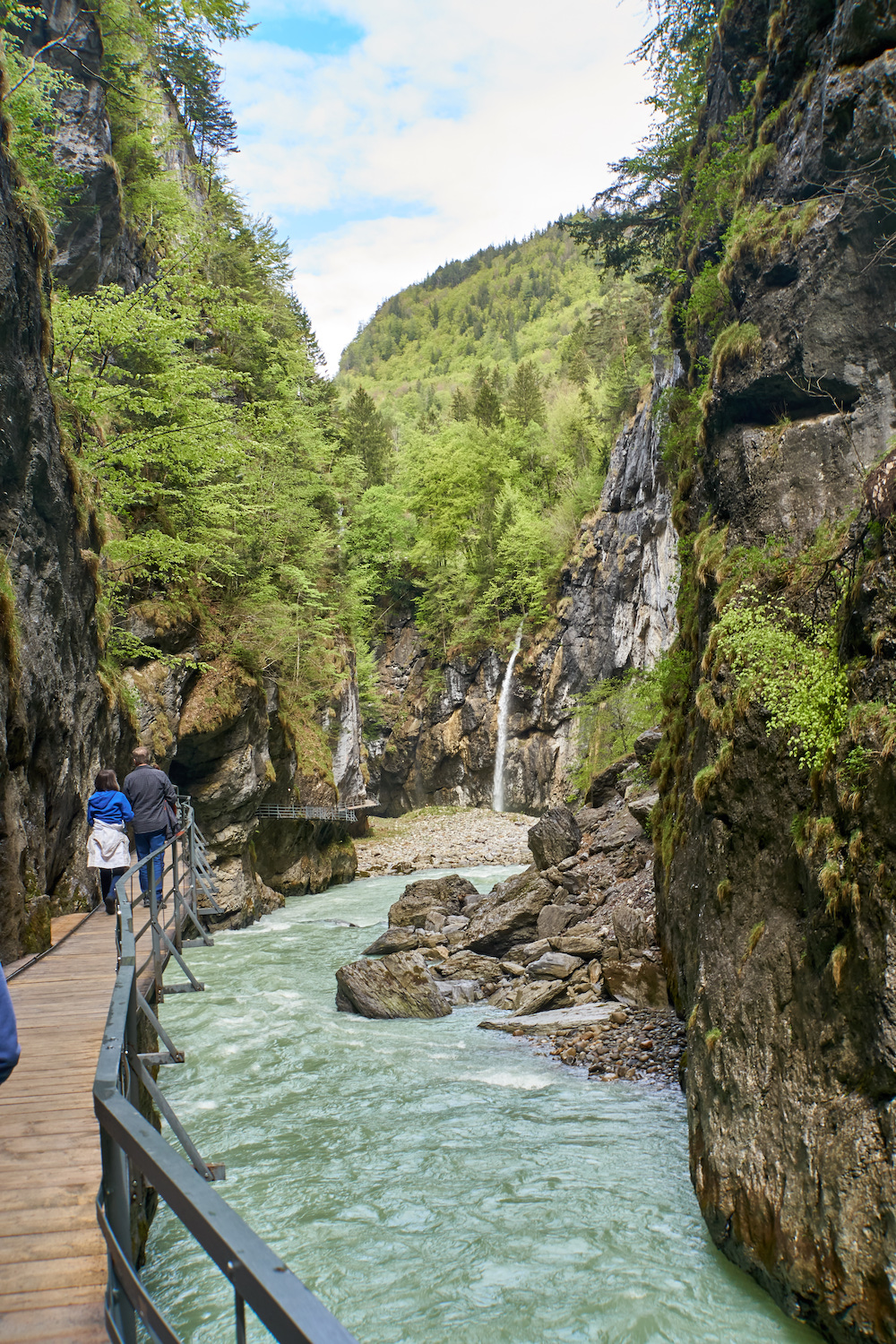 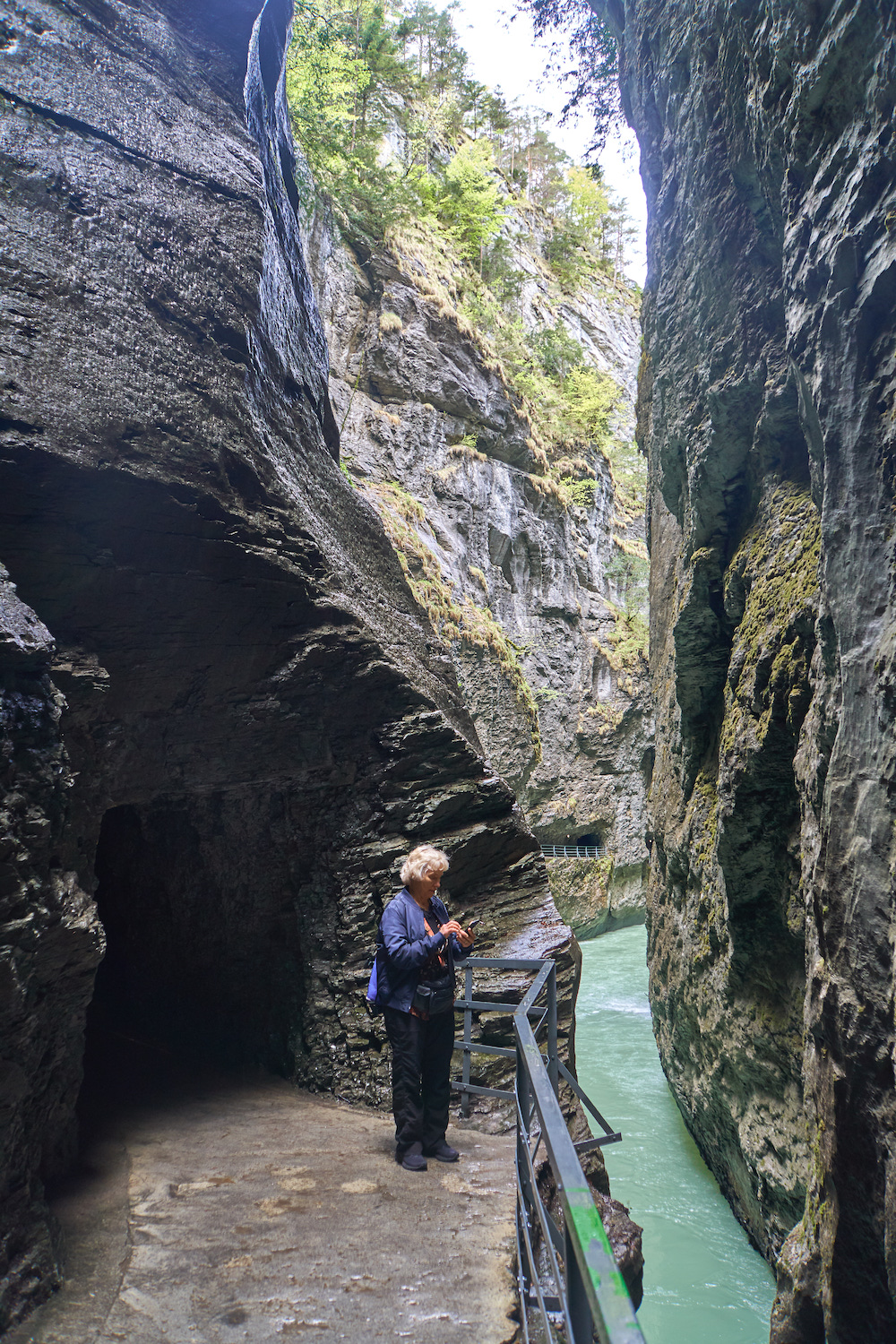 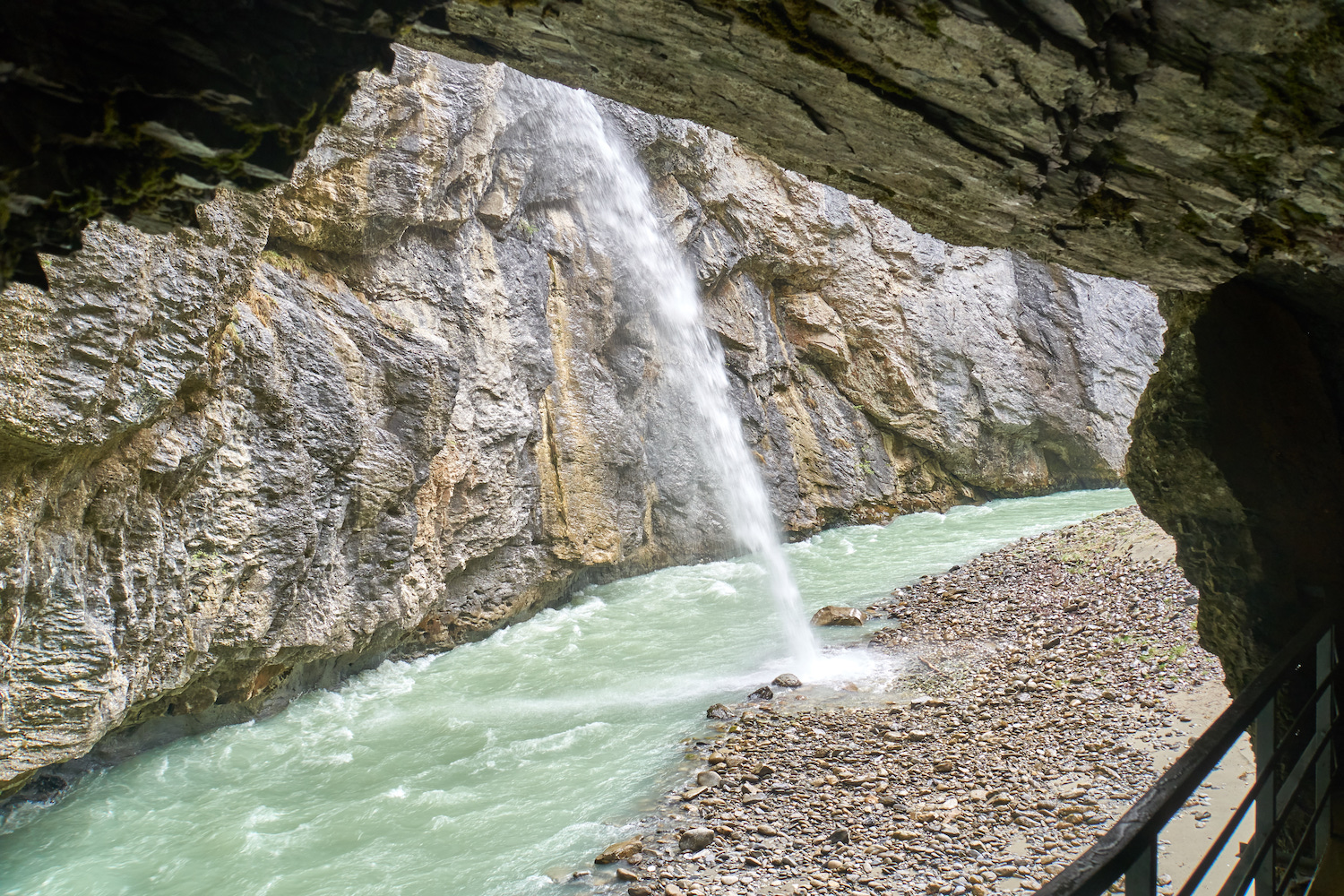 Near the end of the walk we encountered a series of caves and passages within the wall on the left side. You’d walk in a dark passage for a while, then come out to see more canyon and things like this waterfall.

After the walk was over we caught a ride back to the starting point. From there we got a beautiful view of the Aare River valley; see photo below.

Then we climbed down the steps and crossed the bridge to the opening (a round hollow carved by water) in the rock where the train would stop and pick us up. There’s a door in the rock wall like an elevator, with two buttons, so you can indicate which train you want to get on: one going left, or one going right. You push the button and it lights up, but the door doesn’t open until the train arrives.

Steve enters the rock hollow towards the door in the mountain. 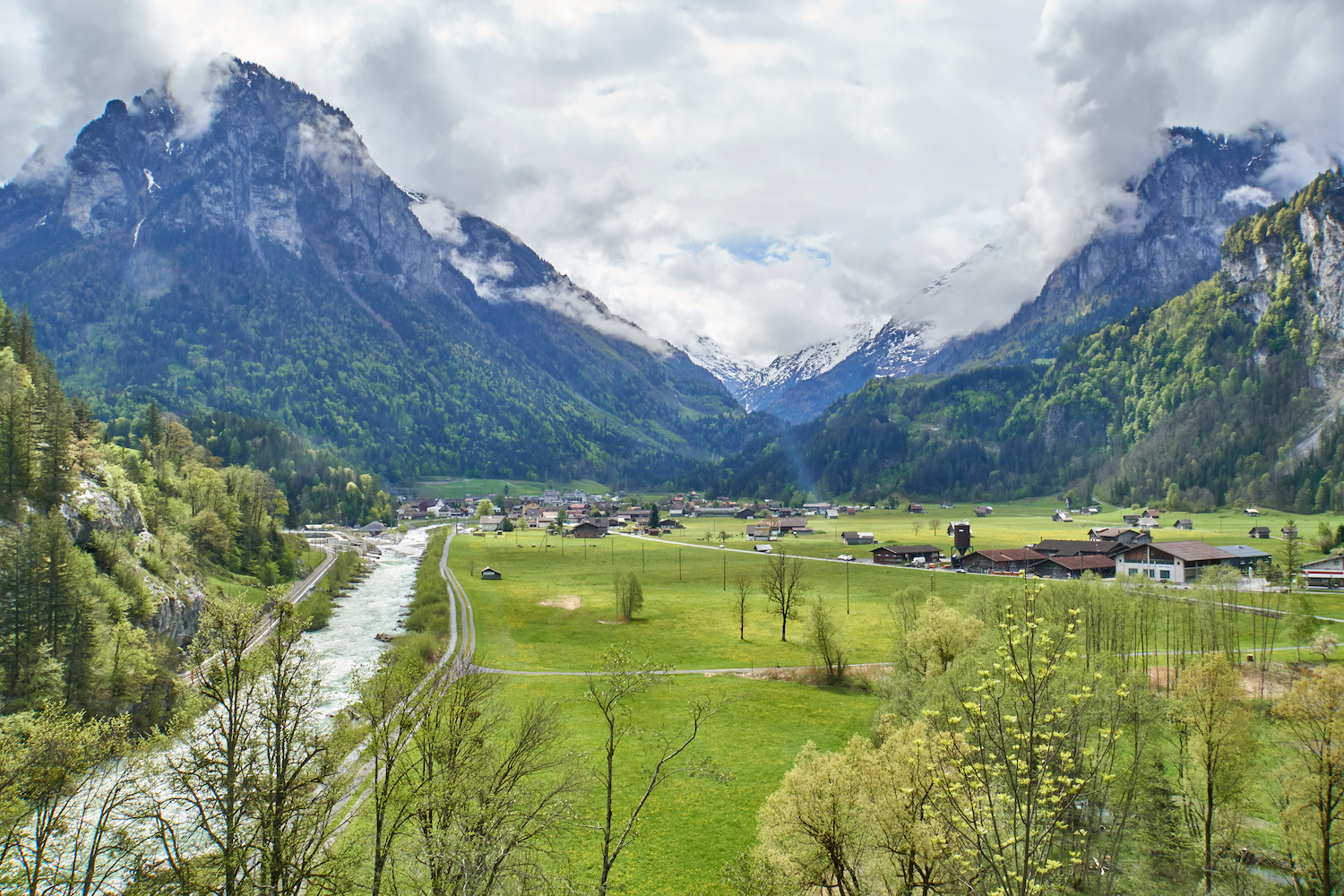 Above is the Aare River valley. 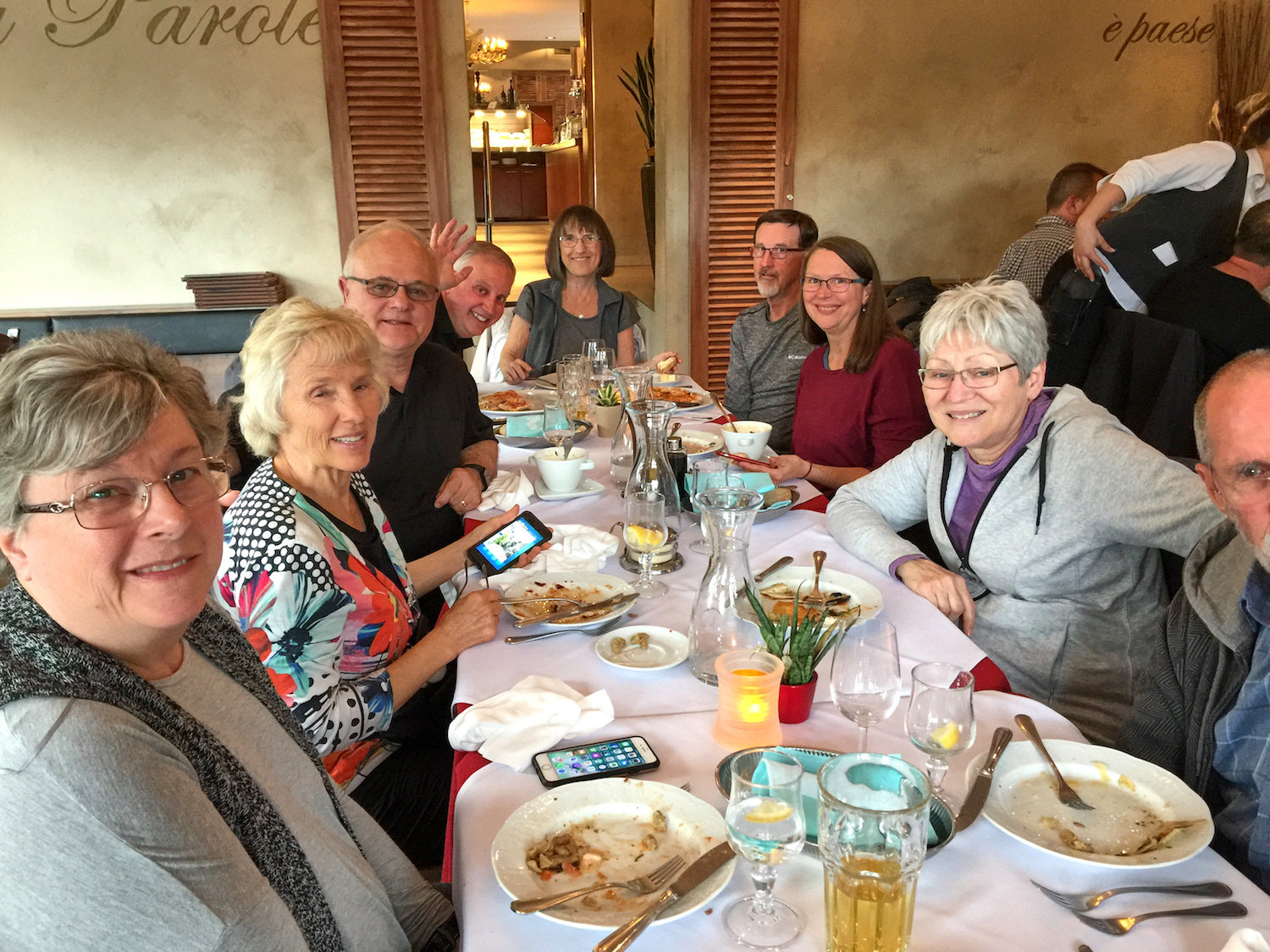 The next day (May 11) we said a sad “goodbye” to Lauterbrunnen and trained to Zurich, which was our departure city. This Italian restaurant in Zurich was the scene of our last meal together, and it marked the end of a wonderful trip with good friends.

We were so thankful for the time spent with them, and for our amazing experiences together!